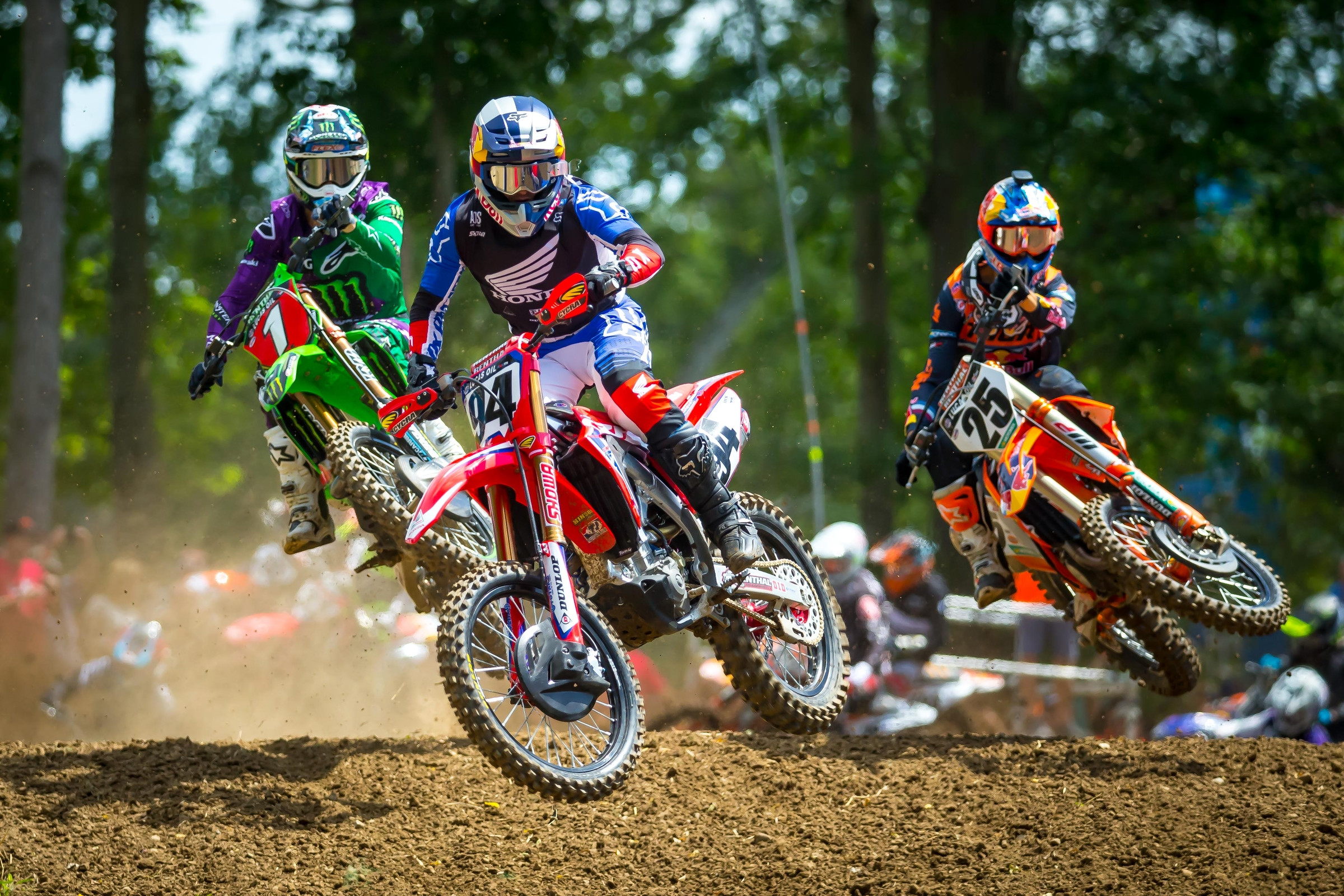 The Lucas Oil AMA Pro Motocross Championship is set to begin a nine-round championship on August 15. We finally have more context and perspective about the timing, tracks, and schedule of these races. So now we get to the fun part: bench racing!

Here are some early talking points for the 450 class of the Lucas Oil AMA Pro Motocross Championship.

The Four-Peat: No storyline will be as big as this one, as Eli Tomac aims for a fourth-straight AMA 450 Motocross Championship. The only other guy to win this class four (or more) straight is Ricky Carmichael. That’s it! One guy. The GOAT. Unfortunately for Eli, his impressive motocross title run was usually overshadowed by not winning the supercross title, but now that tag is finally gone. The focus now goes to his legacy, and record books. Four in a row would be mega. Any reason to bet against it?

Marv’s Back?: Question mark here because we can only assume Marvin Musquin is ready for an August 15 launch. His knees have been tore up, man. Two early seasons earlier in his career were missed with ACL surgeries, then a knee tweak nagged him in ’17, and more knee troubles slowed him during last year’s off-season. Then Marvin really hurt knee in the final moto of 2019, hurt it again trying to come back, and now he’s been off for a long, long time. August 15 would mark 51 weeks (!) since he first injured himself at Ironman last year. Ouch. Marvin would not have been ready had the Lucas Oil AMA Pro Motocross Championship started on time, so he caught a break with this break. Even if he’s back, though, will he be back to his old form?

Musquin has been riding with the KTM/Husqvarna squad lately. Will he be at full health for the August 15 opener?

Our daily riding crew lately✌🏼Thanks @blakebaggett4 for having us all the last couple of days. It’s been fun at your ranch ! @ktmusa

Roczen Tries Again: Took way too long for the “Can Kenny finally win races again?” story to end, but that’s finally done and dusted. Now a championship becomes the final piece of this comeback story. Obviously, Kenny is capable of winning them, but two things factor in here. First, can he avoid the weirdo physical ailments that usually derail his title hopes? It’s possible simply having nine races, instead of 12, will help. Also, racing into September and October could result in cooler weather. The hot races really rocked Roczen last summer. Beyond that, another question that could impact everyone: is Tomac finally due for a stumble here after the three-peat? If so, Roczen is often the main man knocking on the door.

Webb Gains: Most know that Cooper Webb won last year’s Monster Energy AMA Supercross Championship. His outdoors season wasn’t as memorable, as Tomac, Roczen, and Musquin consistently outpaced him. It’s not like Webb, the 2016 250 Motocross Champion, isn’t a capable motocross rider, but the rapid improvement he showed in supercross only translated to about an 85 percent level outdoors. Webb’s attempts at a 450 Pro Motocross Championship will thus be a slower process, but his late-season supercross surge proved motivation is not lacking. Can he establish the same level outdoors as he has in the stadiums?

ZO: Watch this space. Zach Osborne just nailed his first career 450 win at the end of supercross, and generally outdoors comes even easier to him. Remember, he was a moto winner last year at Southwick and just about to become a title contender before a quick shoulder injury robbed him of momentum. If Zach can keep on this upward trajectory, there’s no reason to think he’s can’t be right there at the front every week.

Rookie Reveal: Well, supercross ended up not going to plan for Adam Cianciarulo. He had speed, he showed he could adapt to the 450, but in the end two crashes got ‘hold of him and cost him a lot of time. Adam won last year’s 250 National Motocross Championship, so his pro outdoor bonafides are there. The question is this: are we in for more rookie lessons, or did he already learn enough of them in supercross to get to the next level already? No doubt, this is an exciting addition to the class.

even Rookier Reveal: Cianciarulo has been racing 450s since Monster Energy Cup. Even newer is Chase Sexton, who jumps from a 250SX East Region Championship to the 450 class for the Lucas Oil AMA Pro Motocross Championship. Last time we saw something like this was Davi Millsaps way back in 2006, also for Honda. Since Sexton usually rides smooth and in control, we would not expect the standard blow ups that accompany rookie runs. However, no one quite knows where Sexton’s outdoor ceiling is, as he’s never won an overall in the 250 class. He recorded his first moto win at the 2019 Florida National but the heat got to him and he went 1-39 for ninth overall (Justin Cooper went 2-2 for his first overall win). Were good things just waiting until he got on a 450?

remember Him?: Joey Savatgy has been out of action for a long time. He was barely into his time with JGRMX/Yoshimura Suzuki when he got hurt in Australia, and then missed all of supercross. Joey could have come back for a few supercrosses in Utah, but told the team he wanted to put full focus on one series so he could come back strong and open up some eyes. Joey was very good as a 450 rookie last year, but now he needs to prove himself again, and JGR Suzuki is way, way in need of some results. Pressure is on, opportunity awaits.

Blake Baggett: Warning! Warning! Never do an outdoor preview piece without mentioning Blake Baggett. At any moment he’s due for a hero ride that will make you look bad if you don’t. So, Blake Baggett can win races! There. It’s been written.

So Much Else: We haven’t even mentioned Rockstar Energy Racing Husqvarna teammates Jason Anderson and Dean Wilson here yet. Nor Justin Barcia. Nor whoever could end up being Barcia’s summer teammate while Aaron Plessinger is out with a wrist injury. Plus, there’s always someone lurking unexpectedly to run up front in the 450 class outdoors. How about Brit Max Anstie on the HEP Motorsports Suzuki? There’s always that great unknown with a new season. Now we finally know we’re going to get one.