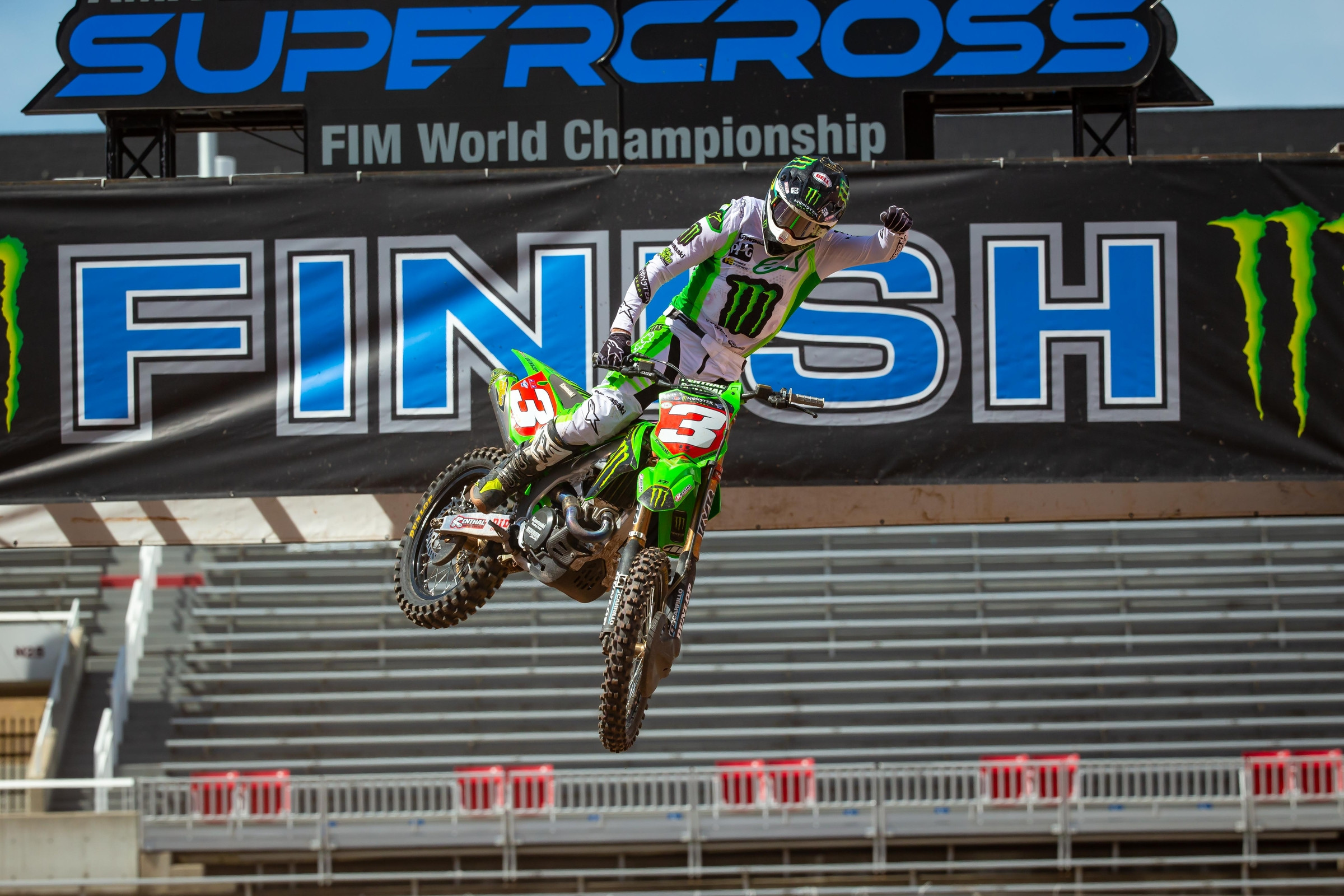 In 2019, Eli Tomac became only the fourth rider to complete a three-peat in the 450 Class of the Lucas Oil AMA Pro Motocross Championship but this year the Colorado native finally got the 450SX title monkey off his back. Tomac now has 34 450SX main events and at the end of June finally earned that elusive Monster Energy AMA Supercross Championship he’s been searching for since joining the premier class in 2014. Now he gets to hand the dubious “rider with the most supercross race wins without a premier class title” trophy back to Damon Bradshaw.

In an event hosted by Kawasaki last Friday, our Jason Weigandt joined Tomac and seven-time supercross champion Jeremy McGrath for a few quick questions about winning championships, dad life, and more. You can watch this interview via Zoom video below, as well.

Racer X: Eli, if you get in this championship type of position again, did you learn through this—will it make it easier maybe to win future titles now that you got this supercross one? That’s high pressure and you handled it this year, so does that help you going forward?
Eli Tomac: Oh, yeah, it probably will. Just having that one thing in your mind, right? But at the same time every season is so different and unique but we were more consistent this year, that’s all it came down to. I’ve said it a thousand times now but I never had that big tenth or 15th place finish—that’s what was different.

But does getting the monkey off the back help a little bit—do you almost feel even more relaxed day-to-day even? Or will it be something you won’t know until the races start again?
I think so, I think it will help for sure. Because I didn’t want that going down with my career and my name [Laughs]. Having those 30 whatever wins in the class and not having a title to that. So at least that’s to rest now!

How are you managing the schedule this year because we don’t know how long the season is going to go? Now we think it might go to October, which is later than normal, but there’s been multiple breaks. How are you managing that to not overdo it but not get completely out of shape or not in touch with the motorcycle?
These breaks have been just short enough to where you’re not going to be totally out of it and way off track. So I think that’s kind of what’s kept us going—we’ve just been doing a little bit of riding and kinda maintaining. And that’s it. I think if there would’ve been a whole ‘nother month after that break in supercross that would have thrown guys off  but I didn’t really feel like I was missing much when we got back on the track. We already had such a big base built up that way.

So you have a new daughter, how has that affected things day to day? Do you get to use the “Hey, I gotta be in shape and recover” excuse here and there?
[Laughs] I get that pass a little bit. After about 8:15, then I get to use that pass, I’m like “Hey, I gotta go ride.” [Laughs]

Did you worry about that actually affecting things? Your timing was great because she came along while there was a break but did you worry about handling two things at the same time, essentially?
[Laughs] Maybe I should have more but I kinda just went with it, man. I really wasn’t that jacked up from it. I was fine.

One question there for you, Jeremy. You have so much experience and you won so many supercross titles, is it cool every time someone joins, do you feel like a new guy joins the club when somebody breaks through and gets that supercross title?
Yeah, you know it’s cool. Like I’ve said before, I’m such a fan of the sport, I love it so much, I love watching Eli ride, and I love watching all these guys these days. It’s just nice when we, as fans, get a nice battle. I know one of my favorite riders, which is weird to say because he’s one year younger than me, but [Damon] Bradshaw won so many races and he was so fun to watch but he never got that title so I’m happy for Eli to be able to do that. And look, Eli’s not going to recognize this right now because he’s young and he’s still racing but we’re in a pretty elite club and there’s not too many guys that have won races and then get to the point where they win this title. Then, like, his motocross championships, what he’s done there is incredible. He’s in a really elite club. And hopefully he can get a back-to-back supercross championship if things work out and then you join another sort of club. But yeah, it’s neat. As a fan, all we can hope for is a good championship to watch and we got one this year so it was awesome.