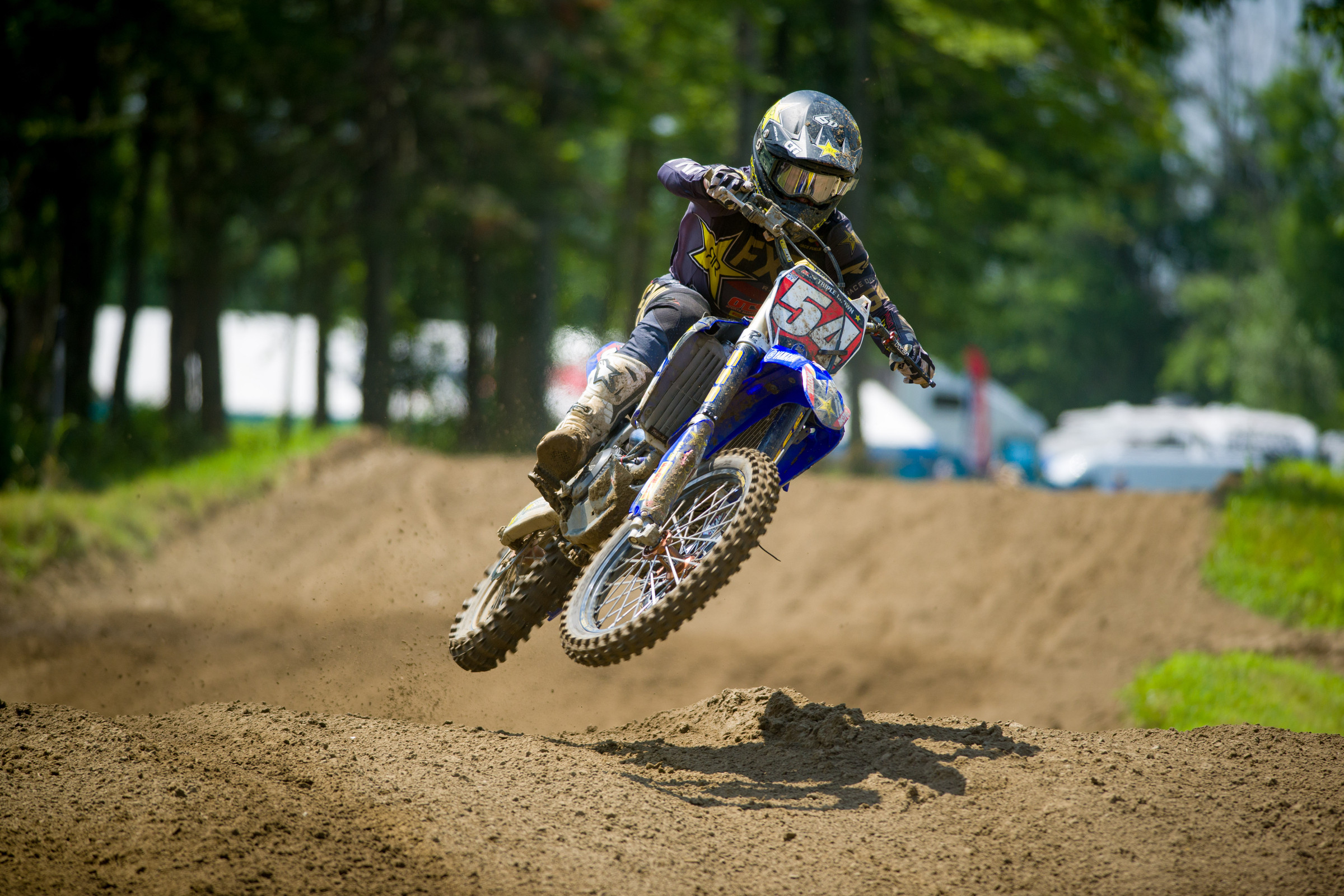 Like everyone everywhere in the world these days, the guys up north in Canada running the Rockstar Energy Triple Crown Series have been greatly affected by the COVID-19 outbreak. The country of Canada has been doing a great job managing the outbreaks and many provinces are reporting very low positive tests which is great. It also means that things at the government level are being a bit more relaxed and dirt bike racing is one of the things that have been allowed to go forward.

The original schedule was, of course, chucked in the garbage and the guys at Jet Werx have rejigged everything to have a five round MX series at four different tracks (all on the East Coast of Canada). At four of the rounds there will be three motos a weekend, with one running on Saturday and two on Sunday. Yeah, you heard that right. So the series is trying to get in as many motos as possible to make this a legitimate championship and it’s a pretty unique plan.

Of course, the usual social distancing rules are all in effect: parking far apart, masks required outside of your bubble and the tracks have been given permission to have up to 100 spectators as well.

Here is the updated schedule for the 2020 Rockstar Energy Triple Crown Series:

So what’s changed besides the obvious?

Let’s run down some of the main teams in MX1:

The multi-time Canadian champion, Colton Facciotti, won the 2019 MX1 MX title and promptly retired from the sport with his legacy as one of the best Canadian MX riders ever secure. Also, Mike Alessi, who gave it a hell of a run on and off the track last year will not be coming back for another shot at it.

Facciotti and Alessi’s team from last year, the GDR Honda squad, moved the MX2 champion Dylan Wright up to the 450 to be the top guy there. Wright’s generating some pre-season buzz with his rides the last couple of weeks and he’s got speed, he’s got talent but it just remains to be seen if he can tame down the mistakes he’s made in every year except 2019, when he was about perfect in MX2.

Canadian Monster Energy FIM Motocross of Nations hero Tyler Medaglia has moved back up to the MX1 class for 2020 and he’ll be a factor for podiums all series long. The Monster Energy Kawasaki rider is a veteran of the series and will be looking to avenge his somewhat-crappy return to the MX2 series last year. His teammate Matt Goerke had maybe his worst year in a while last year. The two-time MX1 champion will be looking to put his injury-filled year behind him in 2020. The fact that three of the rounds will be on sand tracks will certainly help the Floridian and former Southwick winner.

Red Bull KTM will once again bring out Cole Thompson as their main MX1 rider and although he’s better indoors than out, he’ll be in the mix for wins and podiums this summer.

Rockstar Energy Yamaha will bring back its two riders from 2019 in “Filthy” Phil Nicoletti and Shawn Maffenbeier. Filthy had a very successful rookie year in Canada season and without a broken radiator and a CMRC penalty doing him in, he very much might’ve won the outdoor title to go along with his Canadian SX title. A former MX2 champion, Maffenbeier had a couple of shining moments but also some injuries that set him back.

Team PR-MX Kawasaki will bring up American riders Cheyenne Harmon and Josh Cartwright to try and break into that top five and steal some points from the front runners as well.

In MX2, KTM’s Jess Pettis, a past MX2 champion, is probably the clear favorite to get another title for his mantle. Pettis has impressed in AMA Supercross down here but ran into injuries this past season that prevented him from defending his plate from 2018. After Pettis it’s going to be a battle with GDR Honda’s Tanner Ward, MX 101 Yamaha’s Marco Cannella, SKY Kawasaki’s Ryan Surratt and PR-MX’s Dakota Alix.

I asked a couple of Canadian moto experts, Ryan Gauld and Ryan “The Newf” Lockhart some pivotal questions about the upcoming series…

Who’s your favorite for the 450 MX title and why?

Gauld: Phil Nicoletti. He’s the very easy choice for the simple fact he likely should have won it in 2019 if not for the blown up rad in moto one at Sand Del Lee and the blow up on Mike Alessi after moto two. These moments cost him the title.

His experience and sheer toughness to get the job done is a solid leap and bound above the competition. With the shortened schedule and all tracks that suit his craft, Nicoletti will be the Rockstar Energy Triple Crown 450 champion in 2020.

Newf: You really have to go with Phil for the simple fact that he is the best guy on paper. He’s a veteran of the sport of motocross and now the gained experience last year with the tracks, competitors and team. I don’t think it will be a runaway for him with the top six all being legit. Dylan Wright, Cole Thompson, Matt Goerke, Tyler Medaglia, and Shawn Maffenbeier all have a shot at winning motos but when the final checkers fly, angry Phil should be the champ.

Who’s your favorite for 250 MX title and why?

Gauld: Jess Pettis. It’s a bounce-back year after 2019 was full of injuries that saw him lose his #1 plate from 2018, and also easy SX title after a first turn crash that left him with a blown-out knee.

His bike, his skills, and his speed are a notch above the other racers in this class. If he wants to pursue the U.S. again in 2021 and prove to KTM he deserves a 450 ride in Canada, this title has to be priority #1.

Newf: A healthy Jess Pettis is a dangerous Jess Pettis. The 2018 champ didn’t show his full potential in 2019 as he came in hurt and was on the struggle bus most of the year. A long off-season gave him the time to heal and get back to his 2018 form. Going to be hard to beat, especially since he is the only former champion in this class.

Gauld: Dylan Wright. It may be hard to label Dylan as a break our rider because he’s on Factory GDR Honda Fox bikes but it’s his first year in the premier 450 class and he will win races.

The amount of talent Wright has is tough to match and some figured his aggressive style might hinder him on the bigger bore machine, but I believe he will be the biggest threat towards Nicoletti’s run to a title. I can honestly say Dylan Wright will win four motos and hound Phil right to the final moto in 2020 for the championship.

Newf: Rookie in the class but could also be a title contender. Dylan Wright, the 2019 MX2 champ has moved up the 450s and I think will turn some heads with the maturity/experience he gained last year being so dominant and really learning how to win. He's going to win motos and overalls but think it will take a full season under his belt to win a championship in the premier class. If there is one thing I know about Dylan, he's not intimidated by anyone so things could get interesting between him and Phil Nicoletti as the gate drops.

Gauld: Marco Cannella. It’s time to nut-up or shut-up for the quiet assassin. This kid has oodles of talent and skill oozing all over every race track but he tends to allow his mind to get swayed by the little things that an experienced title contender can bury and move past.

The MX101 team without Luke Renzland now puts Cannella as the #1 guy over there so a little more pressure comes with that but also the feeling of being the boss. The team has proven what they can provide works, it’s now time for Cannella to show us, critics, he has what it takes and breakout to be a top three guy at every gate drop. [Editor's note: Renzland announced on Instagram on July 7 that he will not be racing the motocross series this year: "With budget cuts and sponsors pulling out, as well as race purses being cut, I’ve had to make the hard decision to pull out of the 2020 Canadian MX series. ...We have left the situation “open ended” and hopefully this worldwide lockdown starts to improve so I can at least get up there to defend the #1 plate in the indoor series."]

Newf: New team, new truck, new chick?? Not sure about the truck or the chick but Tanner Ward is on a new team and seems to have found another level on the bike. Random podiums over the last few years I believe will turn into a consistence top three finishes and make him a title contender. The GDR Honda Fox racing team is a great home for Tanner and I think we will all see a big improvement this year in his race craft.