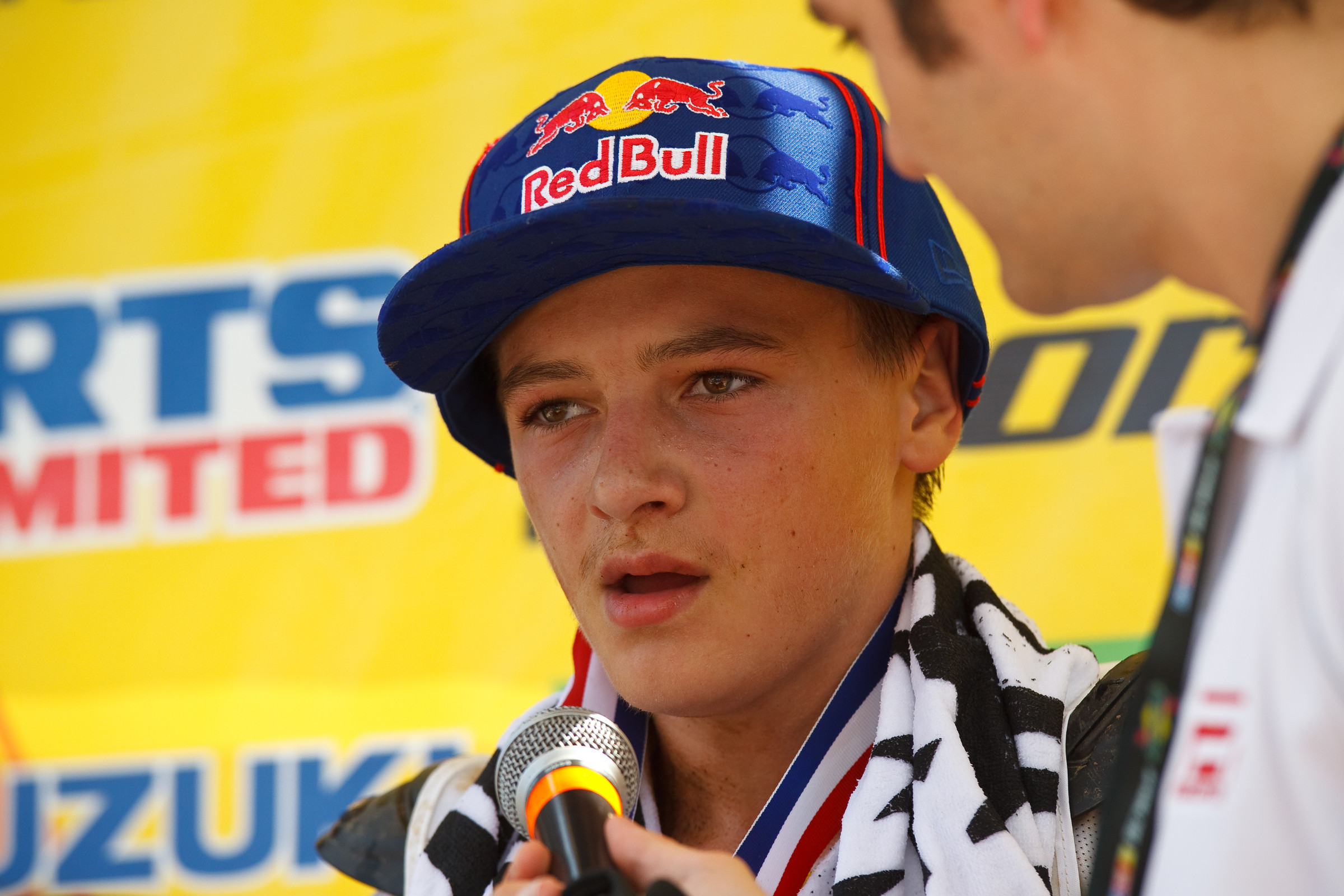 This all started in a different era. For so many years through the 1970s and 1980s, ultra-fast minicycle kids flamed out by the time they reached the pro ranks. Before the advent of 125 supercross, especially, it was sink or swim for riders in the very deepest end of the pool, and factory teams didn’t have big satellite operations to help them float. Some will argue today’s teams go too far in the other direction—long term deals and lots of safety netting for amateur phenoms. Either way, back then, some amazing talent never made it in the pro ranks.

Then, briefly, it got very easy. Ricky Carmichael and James Stewart really changed the game. They won at every level, all the time. RC started tearing it up on KX65s and then just kept winning on everything else, turned pro, and kept right on winning. Six years younger, Stewart did the same thing, except he actually started earlier, winning national races on a 50. They both won the AMA 125 National Motocross Championship in their first pro season. Finally, the model had become simple. The best 50 rider could be the best 65, 85, Supermini and 125 rider and then the best pro.

With that in mind, everyone went looking for “next.” The answer was obvious. Carmichael and Stewart were Floridians that won often for Kawasaki Team Green. There was another rider about to fit that mold. By 2005, Carmichael and Stewart were finally racing head to head for the first time in the pro ranks (Stewart having finally graduated to the 250 class). At the same time, a young 50 rider was already making headlines for his speed and talent. His name was Adam Cianciarulo, and he notched his first championship at the AMA Amateur National at Loretta Lynn’s in 2005.

Team Green signed him, he kept winning, and he became the obvious industry hyped-up answer to the “So who is going to be the next Ricky and James?” question everyone was asking.

By 2007, when Carmichael was retiring as a professional, Cianciarulo was winning both of his 85cc (7-11) classes at Loretta’s. Finishing second to him in the stock class? North Carolina’s Cooper Webb.

Webb was no slouch, either, having won a 50cc title at Loretta’s in 2002 and a 65cc title in 2006. He was good, but Cianciarulo was riding a record-level wave, as the wins kept coming. By the time AC was done at Loretta’s, he had 11 titles, which ties Stewart and Mike Alessi (an amateur dynamo in his own right) for the most titles through the youth and minicycle ranks.

However, by then, a new narrative had developed. Turns out Carmichael and Stewart were not the rule but the exception, because Alessi, the next rider to win at all amateur levels, got the script flipped on him as a pro. Ryan Villopoto played second fiddle to Alessi in the amateurs, but once they met in the 2006 AMA Nationals as professionals, Villopoto got the better of him. This time, the rider who didn’t win at all levels won the title in his first pro season.

As Villopoto kept winning and winning, two paths emerged. Which prevails? The guy that wins all the time, or the guy who uses that for motivation?

As for the Webb/Cianciarulo deal, it’s often hyped as an Alessi/Villopoto rivalry, and maybe the Webb underdog success story gives this tale the same overtones. But really nothing, nothing, matches the hype and drama of an Alessi amateur story. The Alessis were absolute magnets for attention and drama, some brought on themselves, and some brought on because piling on seemed fun. A week at Loretta’s during the Alessi days seemed like a daily soap opera. No other rivalry comes close.

Okay, that aside, we know what came next. By 2013, when both Webb and Cianciarulo were turning professional, Webb was strong immediately, taking fifth in his first professional moto. Cianciarulo couldn’t even race that day due to salmonella. Things kept going that way. AC kept battling injuries while Webb just kept climbing.

Webb also carved a rep as an outspoken southerner, but he largely has resisted teeing off on Cianciarulo (a quick “he cracked, I didn’t” moment after winning last year’s Monster Energy AMA Supercross Championship being the exception).

Last week Webb joined Daniel Blair on the Main Event Moto Podcast and fleshed out some details of those amateur days.

“I remember going and watching and doing practice and just getting the experience,” said Webb of early Loretta’s. “Apparently, I don’t really remember it but, I guess I had told my dad, the last moto I was watching the 50 class and I was sitting on the fence and I told him, ‘I’m gonna win this next year,’ and he was like, ‘Naw…alright, whatever you say.’”

Webb was on his way, but he did admit the Cianciarulo hype was clear.

“To be honest it was more like, I guess from our end, we were like the blue collar, any sponsor we could get was awesome and it just seemed like AC from age six was getting support from all these sponsors.

“I think it was really just tough on my dad and moreso myself. For me it was just more like always wanting to beat him.”

Of course, at the amateur level, the battles are rarely restricted to the riders themselves. We all know moto dads are part of the equation, and Webb didn’t duck it.

“We did have some altercations, my dad, his dad definitely got into it a fair, fair share of times,” he said.

Webb’s route through the amateurs turned weird. He was at one point a poster child for Honda’s new CRF150R four-stroke. That was unfortunate, actually, because there was an assumption that all four-strokes provided an advantage. Amateur results for that bike have proven in this case, that wasn’t the case. Webb did win a Supermini title at Loretta’s on that bike in 2010, but it’s possible people didn’t know how much he had to overcome to do it.

For whatever reason, Webb didn’t go from Honda amateur prospect to Honda professional. He’s talked openly about not having any sort of ride at all, and falling back on Bobby Reagan and Star Yamaha, not a championship-proven outlet at the time. On blue, he found championship success in the B class in 2012, after a torrid week of battles with Shane McElrath and Matt Bisceglia. Still, the way Webb went about his winning was different then, just as it is now. In that big week of B-class battling, Webb won with race craft, clutch moves, and more. Sound familiar?

“It turned into like me not having any professional rides and people telling us ‘This kid just signed a six-year deal or whatever it was with PC [Pro Circuit] for hundreds of thousands of dollars’ and it’s like ‘Dang.’ I think that’s where it kinda stemmed from.”

Again, it’s key to understand that these were just two kids racing. The Cianciarulo family wasn’t selling “Believe the Hype” shirts or sending out emails every Monday telling you what they won.

“I have nothing but respect for AC, he’s a champion, he’s worked his ass off to get where he is,” said Webb. “I think it was more just like that underdog from me of always wanting that attention he was getting or the sponsors or the whatever you want to call that.”

“Whenever you finally beat your rival, if you will, especially at the professional level, it’s like you want to be heard a little bit so I think that’s more what it stems from.”

We now know there are two paths. Webb has made the most of his. Cianciarulo has also righted his ship, and finally won the AMA 250 Motocross Championship as well. We’ll probably see lots of Webb/Cianciarulo battles on 450s. A few quick snippets this year, like the San Diego Supercross, were good. Still, Webb doesn’t forget those early days. It just might have helped him.

“Looking back, I think that’s what’s made me the racer I am—I don’t know if you want to call it arrogance or that chip on my shoulder,” he said. “That’s where it all stems from. It always seemed like no matter what I did as an amateur, there was always a struggle.”