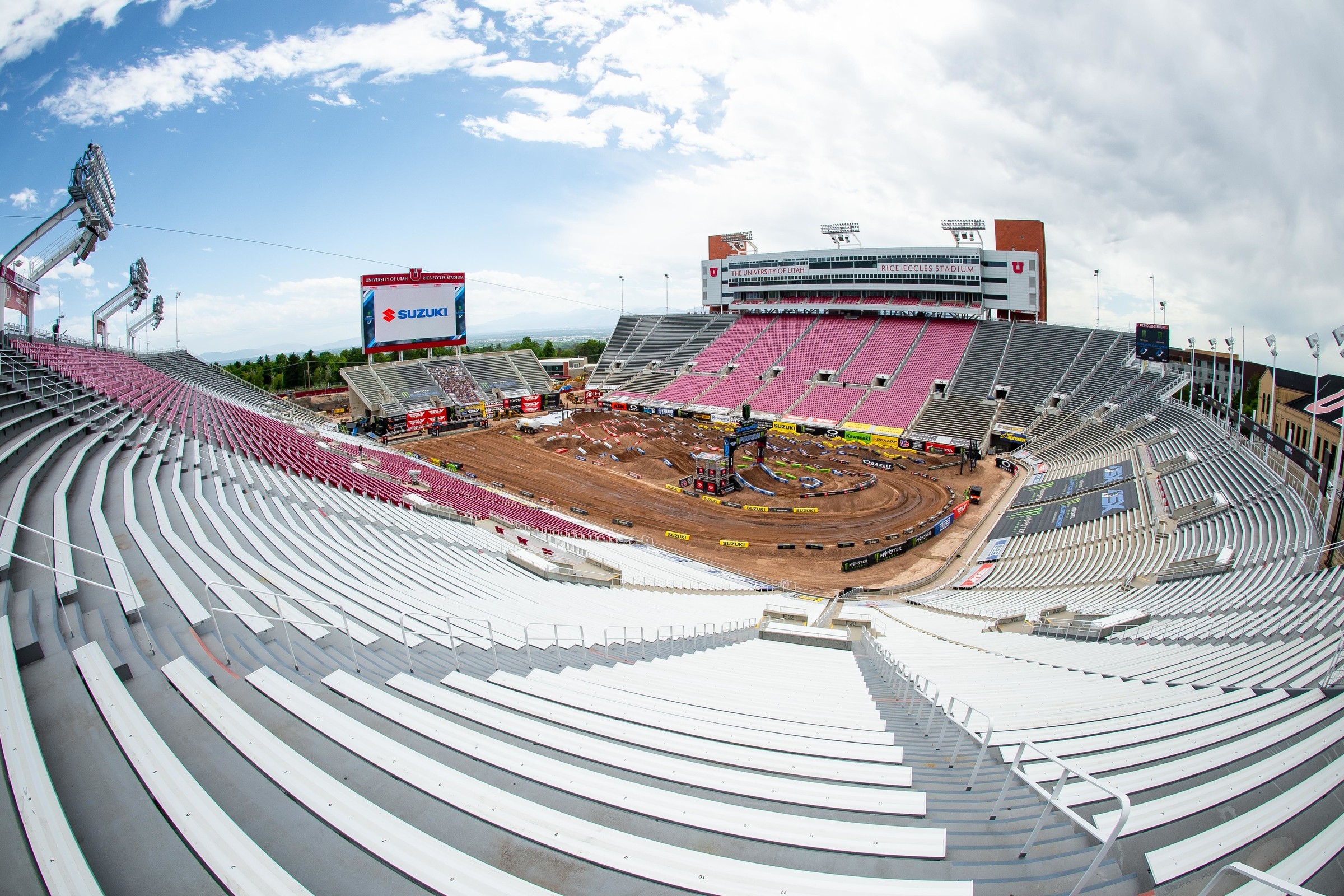 Round six of the seven-round Monster Energy Salt Lake City Supercross Championship, AKA round 16 of the full Monster Energy AMA Supercross Championship, took place on Wednesday night and yet again we saw more great racing. It’s weird, you’d think some dudes would be mailing it in by now but for the most part, the have put on a show at every round.

This track was basically the same as the last one [from Sunday] with a couple of turn changed. However, the small changes worked and when you add in the fact that we got rain the night before, the dirt was pretty good. It allowed the guys to get some traction. The rain coming in and out of Salt Lake City has led to varied dirt conditions at these races, despite the fact that every race has used the same dirt!

Let’s get into the uppers and downers from SLC SX 6 yeah?

UPPERs: Cooper Webb. Yup, another impressive race as he held off Eli Tomac for the win. Webb rode behind early leader Zach Osborne for 22 laps before making a sweet move, and then he took off. He dropped his times the second half of the race (his fastest lap was near the end of the main) and all in all, he was so good. The fortitude it takes to hold off Ken Roczen and then later Eli Tomac, pass Zacho, work your way through lappers and get better as the race goes on? Amazing. Well deserved win for Coop.

UPPERS: Pretty much the whole race. Bro, the top five guys were going for it. Osborne, Webb, Tomac, Roczen, and Jason Anderson pulled away from everyone and were putting on a hell of a show up front. What a race, just the smallest mistake by any of them and they would’ve been shuffled back but nope, didn’t happen, they all stayed close. Great race…thanks guys!

UPPERS: The 2-3-3. I love it when some dudes do things on the track that others, who are all world class, can’t do. Jason Anderson and Dean Wilson started doing this 2-3-3 section in practice, Webb followed and then it was on. It was 0.2 or 0.3 seconds quicker to do it that way by my watch and guys like Justin Brayton and Ken Roczen never did it until the heat or main events. Roczen seemed to never be able to pull the trigger on it and it hurt him in the main. That’s so gnarly to know a jump combo can be this tough, as obviously Roczen has skills. I heard he did it but never saw it for myself, and in the main he didn’t pull it like the dude in front of him. Just a tough section and it’s always cool to see this stuff.

UPPERS: Sexton. Chase Sexton was SO good. He was up three points going in and had Shane McElrath in front of him early in the main event. This was it…he had to get Shane or they would be tied going into the final round. This would not be easy with Shane being A) ahead of him and B) a pretty good rider. But Chase tracked him down, made a sweet scrub off a double and completed a hard, but fair, pass on him. It was textbook in that it left McElrath off balance and didn’t allow any retribution. Then Sexton took off with a huge win. Great race.

UPPERS: ET. Man, Tomac’s starts haven’t been good the last couple of races but after that? Yeah, he’s solid. He’s also, barring a complete disaster, going to win his first 450SX title this Sunday. He charged from basically last (not 12th people, AMA can’t seem to publish any lap data before the first lap is complete, even though somehow the TV can display it) to second in a hell of a ride. He’s probably losing some sleep thinking of all the things that can happen to a dude like him when he’s charging though the pack but for us, it’s a hell of a show.

UPPERS: Wacko. Zach Osborne has been great here in SLC and led most of this main event until ending up third. He’s reached a new level, one that some of us thought he would last year in his rookie 450SX season. Remember when 2020 Zach would make mistakes and crash? Yeah, that guy seems to be long gone. Long live Wacko!

UPPERS: These 250SX privateers. The class isn’t the strongest right now but hey, you can only race who shows up right? Enzo Lopes and Lorenzo Locurcio both had very good main events in working up from the back of the pack to get inside the top ten. This was Lorenzo’s best race of the year, for sure. Lopes has been strong all year long, but this was especially good when you consider he popped his should out a few rounds ago.

UPPERS:Darian Sanayei. Somehow, in a field of factory bikes at altitude, the privateer pulled the holeshot in the 250SX main event. Wow, that was cool though for him and I still can’t believe he pulled that off.

UPPERS:Benny Bloss. I think I used the Bloss is your boss line in my previous column (I don’t know at this point what race is what and what day it is here…send help) but either way, Benji Bloss has been riding very well lately. It’s not just the heat race win a few days ago, he’s notably faster in practice and the mains, too. Good to see.

UPPERS:Curren Thurman was crushing it in the main before getting a bit tired out there but still held on for a great finish. Kevin Moranz was another guy that did very well out there…250SX East: a Privateers haven.

DOWNERS: Tick. I like Broc Tickle a lot, he’s a good dude and he caught a terrible break when, after getting reinstated from his joke of a suspension by the FIM, he broke his hand in his second race. Then he got more of the shaft when he broke his other hand at the first race in SLC. But having said that, he’s been a podium guy before and hasn’t shined here in his return from injury. Maybe it’s just that, the injury? Or maybe it’s the rust still from missing a year? Whatever it is, he hasn’t been as good as I would expect.

DOWNERS: Owen. Jace Owen didn’t ride the first practice due to bike problems and he got one lap in during the second practice before he had, yup you guessed it, bike issues. I was thinking that it would be gnarly to go into the heat race with just one practice lap, but he didn’t show up to race because, I assume, the team couldn’t get the bike fixed. That’s the ultimate downer for me.

DOWNERS: The 250SX East. Yeah, uhhhh, it’s not that deep. Obviously the guys up front are way legit but after that, injuries and riders taking dives have really hurt this class. The lappers were a tad much out there for the leaders. It’s nobodies fault, it happens. But yes, let’s make sure we award these guys with the same amount of points as the 450SX dudes when it comes to awarding AMA National Numbers for next year. We HAVE to do this. Just give tenth in a 250SX race the same amount of points toward a national number for tenth in the 450SX class. I mean, talent level in both classes is about the same, no?

DOWNERS: Just Short. John Short had it man, in a depleted field he was crushing it early in the main and looked to have a career best finish in the bag when you look at his fitness and past results. But then he crashed. Which sucked. Then he crashed again even worse and he went from hero to zero just like that. Twentieth place for him. Bummer!

Thanks for reading everyone, just one more to go here and the 250SX Showdown should be complete nuttiness. Plus, Tomac tries to finally wrap the championship! Email me at matthes@racerxonline.com if you want to chat!