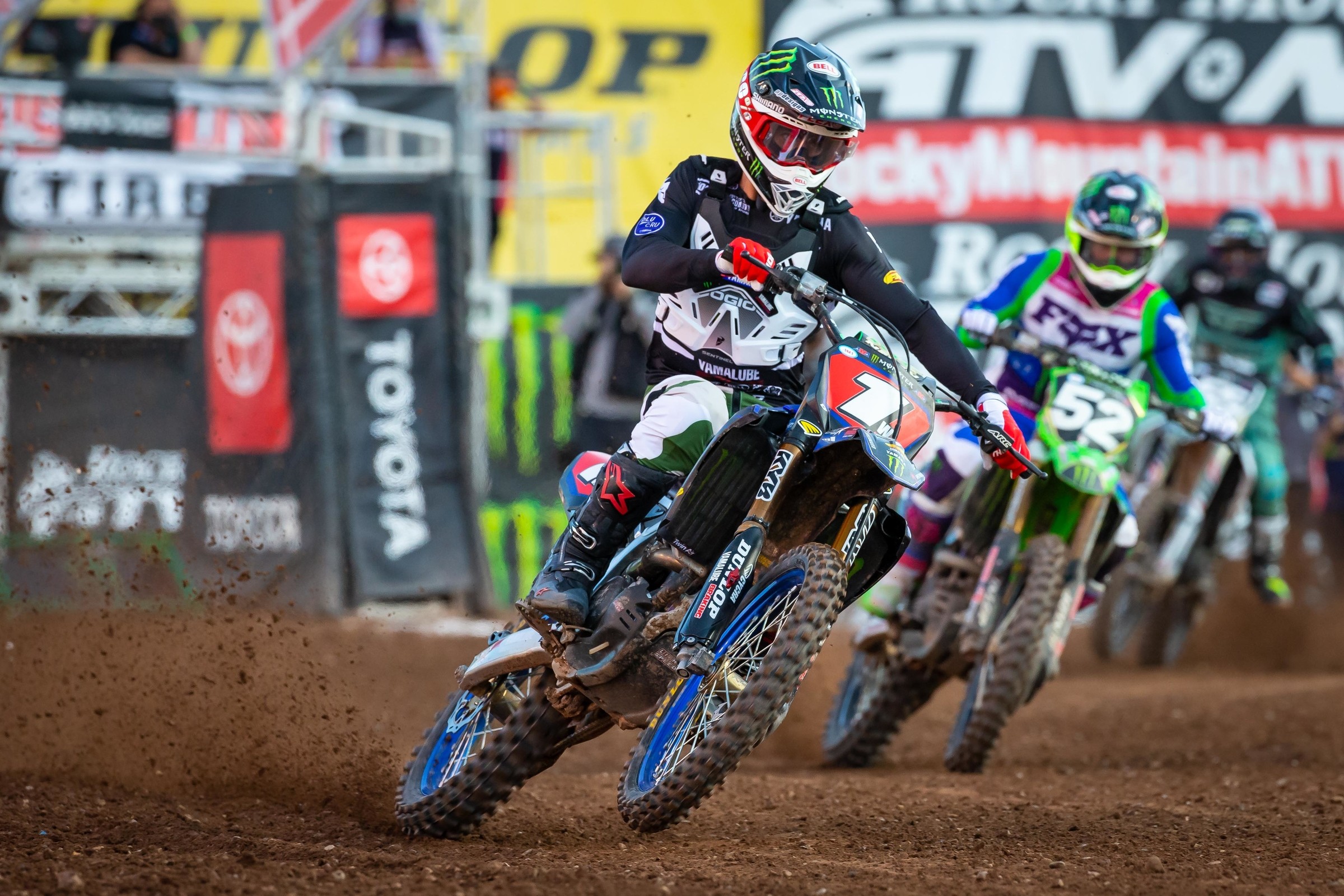 Suspense is the lifeblood of any sport. After all, would anyone really care about what happened at the races if you already knew exactly what was going to happen? Not a chance! On the flipside, the racing is the most exciting when the anticipation meter is pegged, and right now in the 250SX classes, the needle is about to break off.

If you’re not familiar with the 250SX East/West Showdown format, it’s combination of both East and West Coasts in one main event, which means all the fastest 250SX racers from the East will line up on the same gate as all the fastest 250SX racers from the West. This is supposed to happen twice a year, but when the COVID-19 deal jacked up the supercross schedule, the first East/West Showdown went away with it, leaving just the traditional finale Showdown as the only East/West meeting of the season. With all the extra talent on the track and a pair of close title battles, the potential is huge for a championship shakeup. More on that in a minute—let’s examine the scenarios on each coast before scrutinizing the upcoming bi-coastal brawl.

In the West, we’ve got three riders in mathematical contention, but since Justin Cooper is 17 points back, we’re going to focus on Dylan Ferrandis and Austin Forkner. Ferrandis leads Forkner by seven points, which means that if Ferrandis finishes third or better, the title is his no matter what. If Forkner wins, he’ll need Ferrandis to finish fourth or worse. Ferrandis on the podium is a good bet, so a scenario working for Forkner seems unlikely, but again, there’s going to be more talent on the line. By the way, If Forkner finishes second, he’d need Ferrandis to finish seventh or worse.

So what about third-place Justin Cooper? If he wins the race, and Ferrandis finishes 15th or worse and Forkner finishes eighth or worse, Cooper wins the title. Seems crazy, yeah, but back in 2017 we spelled out the nutty scenario it would take for Adam Cianciarulo to come from fourth to first in points in the final race, and it darned near actually happened!

In the East, Chase Sexton, who won last Wednesday, holds a six-point advantage over Shane McElrath. Just like with Ferrandis, a third or better for Sexton will clinch the title for the GEICO Honda rider, even if McElrath wins. If McElrath gets second, Sexton needs at least sixth place, which would result in a tie. Sexton would still get the title though because of his superior win count, which is the tie-breaker. A third for McElrath would only require Sexton to get eighth, which Sexton can probably do with Tech 10s covering his hands.

The real intrigue comes when you merge the coasts. Lately, the only East riders who were generally in the podium conversation were Sexton, McElrath, and Colt Nichols. It’s certainly possible they could all get between Forkner and Ferrandis, but that’d have to be a perfect storm, especially when you consider McElrath and Nichols are teammates with Ferrandis. The West, however, is packed with assassins. Ferrandis, Forkner, Cooper, Christian Craig, Cameron Mcadoo, and Jett Lawrence could all get in the mix. And with any misstep the 250SX East riders are going to have guys like Hunter Lawrence, Alex Martin, Brandon Hartranft, and Michael Mosiman all over them. Even if you take out Sexton’s GEICO Honda teammates, that’s still enough talent to get between McElrath and Sexton and loosen Sexton’s six-point grip.

“My plan is to go and win,” said McElrath after Wednesday’s race. “I believe I can win. I think everybody behind me is going to be fast also and Chase is going to have his hands full. It’s going to be good. It’s only six points, so we’re ready.”

Plus, hey, it’s not even all about points. Remember, there’s some ego on the line here as the fast dudes from each division want to prove they’re the best. Plus, winning the race makes the math easier.

“I’ve been looking forward to this East/West shootout all year,” said Sexton. “I want to race everybody and I think we were supposed to have two this year and we only got to race one. For me, I want to go out there and have that offense mentality and put myself in a good position. Hopefully we can run up there and try and win the race. I think I want to prove some stuff on Sunday. I feel like tonight I rode well, so hopefully carry that into Sunday and just come in with that offense mentality. I want to win that race. I’m looking forward to getting out there and mixing it up with the rest of the crew.”

Hey, Sexton would probably love to beat Austin Forkner just to show how much he’s improved since last year, right?

One of the most interesting situations that could happen is if one Monster Energy/Star Racing Yamaha rider loses the necessary championship points he needs to a teammate because that teammate needs them for his own title. Confused? For example, let’s say McElrath is running third and Chase Sexton has issues and is all by himself in eighth. In that situation McElrath gets the championship. But what if he’s got Ferrandis coming up on him, and Ferrandis has to get third because Forkner is winning? It could happen! It doesn’t seem likely, but then again, consider all the craziness we’ve seen in this race over the years. The forecast for this race is always chaos with a chance of ridiculousness! Mix in a little ego and the brash nature of the 250SX class and the ingredients are there for a race jammed with suspense, and that’s all we really want, right?