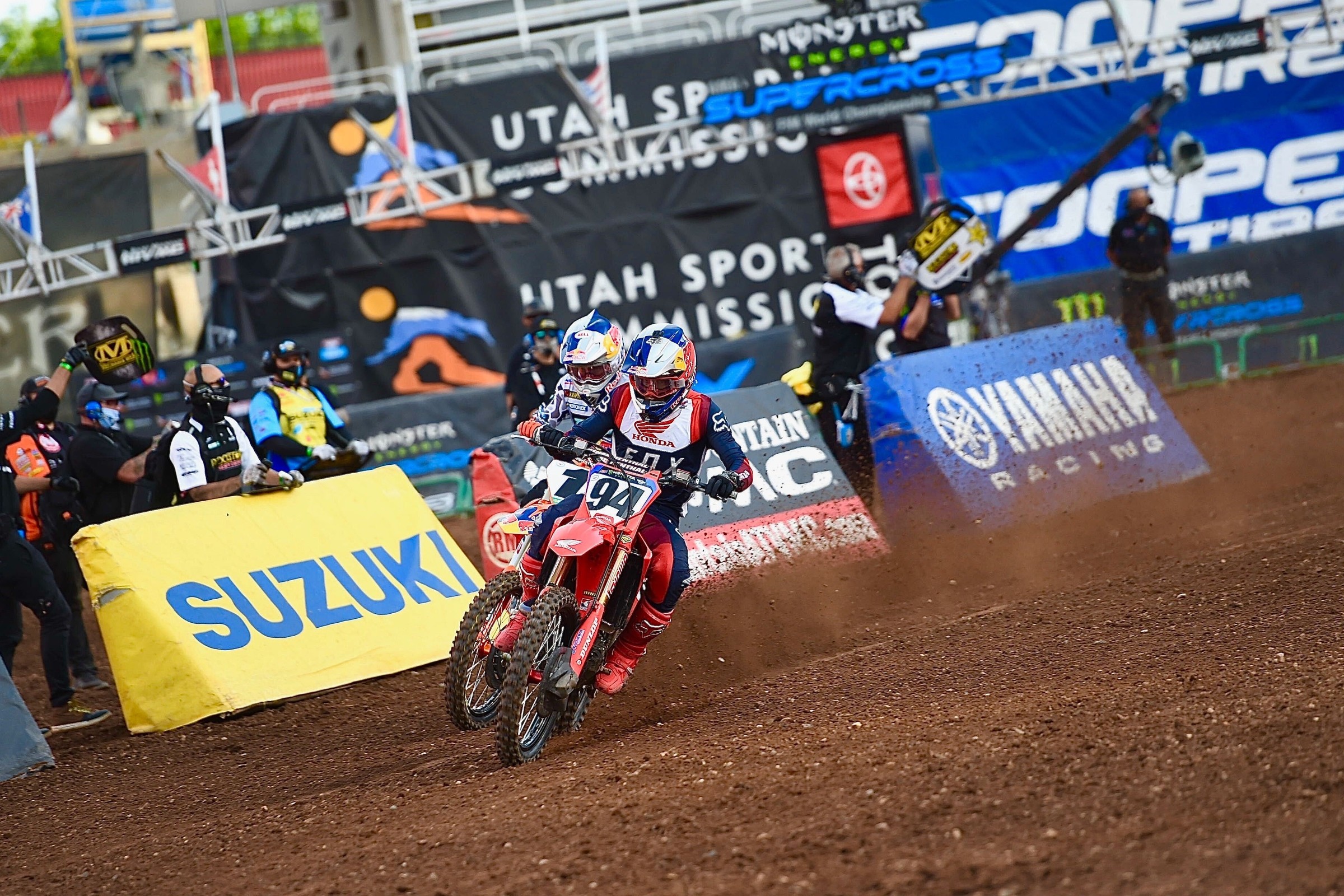 Tonight’s track at Rice-Eccles stadium stood out for a high number of 180 degree corners. Ken Roczen used a mastery of those 180s to completed a 180 of his own, rebounding from a series of sub-par races and a fight with shingles to suddenly win again.

To further prove the point, the race played out just like the last race, but with a totally different ending. Just like on Wednesday, Cooper Webb edged ahead of Roczen with the holeshot, and Roczen stalked the defending Monster Energy Supercross Champion from second. On Wednesday, Roczen looked quicker than Webb at times but could not pass him, and when he did, Webb immediately got him back, and then Roczen faded. This time, Roczen made another quick pass…but then took off. Unlike the last three races at Salt Lake City, the fade never came.

“It’s a big big turnaround after the last few races, and that’s not easy to do,” said Roczen. “I just had fun, we got the bike dialed and my physical condition was a lot better today. Really gelled with the track out here today, and the bike. I’m so happy with the team, we got the bike so dialed.”

In a post-race press conference, Roczen revealed that shingles, which he revealed he had contracted a few days ago, is already under control. He thanked Dr. John Bodnar and the Alpinestars Medic Team for diagnosing him quickly and getting him on medicine, which has helped control the situation.

“I always lay it out there, I never want to give up, but honestly the last three races were just crazy,” said Roczen. “I just go as long as I can, and obviously lately that hasn’t been the whole race. It’s really tough after having so many negative races in a row, three really, and to try to come out here like nothing ever happened. But that was my goal. I knew from Wednesday through Sunday I had an extra day. I’m not saying all of a sudden I’m 100 percent, but I just needed to be where it’s manageable.”

“I got a great start in the main, but Kenny was riding well,” said Webb. “I knew he was a little faster. So when he got by me I was just going to try to pace him, and I thought with his physical condition and stuff, I thought maybe he would fade halfway or something. I just kinda’ stayed in there, but he stayed strong to the end. I tried to put a charge on at the end, but the way the track was, it was hard to make those chunks. Got second tonight, straight up.”

Webb has finished first or second in each race in Salt Lake, and still has the highest points total of anyone during this run of races, but, he did hand second in the championship standings back to Roczen. It could be a nail-biter on Wednesday because Eli Tomac is right on the edge of wrapping up the crown, holding a 24-point lead on Roczen, and needing a 26-point lead on Wednesday to wrap it one race early.

In this race, Tomac’s chances were again hampered by a bad start, further exacerbated when Webb came across the front of him on the exit of turn one, and they bumped front tire to rear tire. Somehow Tomac stayed up, but was set deep in the pack for the second-straight race. He clawed forward to get around Rockstar Energy Drink Husqvarna’s Zach Osborne and then Bullfrog Spas /SmarTop/MotoConcepts Honda’s Malcolm Stewart to get to third (Stewart and Osborne continuing their recent string of strong rides). For a brief moment, it looked like Tomac would make a run at Webb for second, but the charge was short lived.

“I was pushing the first half, and I was creeping up on the front two, but it wasn’t enough,” said Tomac. “I got hung up behind a few lappers, and at that point they broke away a bit, and it wasn’t worth it. In the whoops, I moved over and that left side was better, I was bummed I didn’t see that earlier on. I was fast in the middle but I had some squirrel moments. So the pace was hot and I felt like I was in no-man’s land.”

Late in the race, Osborne and Stewart were still battling for fourth, and when Stewart made a mistake over the dragon’s back before the start straight, Osborne sailed past to steal the spot. Both riders have been brilliant in Salt Lake City, much improved compared to the first stretch of the season. Osborne has stayed in the top five in all five races here, and Stewart tied his career-best with the fifth, which he set just a week ago.

Dean Wilson has also been better at these races, taking sixth, outdueling his old 250-class and amateur rival Blake Baggett, who rebounded from a heat race crash to take seventh on his Rocky Mountain ATV/MC KTM.

“I feel like my pace was decent through the whole Main and I think a few different line choices would have helped me throughout the race,” Wilson said. “I think I had a couple bad lines after watching it and that kind of held me up a little bit. But other than that, I can’t get too frustrated. I gave it my best and that’s all you can do.”

Also of note, Rockstar Energy Drink Husqvarna’s Jason Anderson had a horrible race, getting bumped down to the ground early after some incidental contact from Roczen, and then getting collected in a pileup later. He didn’t finish the race, which means he hands fourth in the championship back to Barcia.

In the Main Event, I ripped a good start and I went into the second corner in second, and then it kind of turned into a crazy night,” Anderson said. “It sucks I wasn’t able to finish but at the same time there’s a lot of positives to take away from how I was riding, and my starts, and stuff like that. I’m just going to look forward and try to prepare for the last two rounds and end on a good note.”

Speaking of 180s, Austin Forkner has reversed the situation in 250SX West. Before the massive break in racing, when the west was battling back in February, Dylan Ferrandis hung two-straight wins on Forkner, using two block passes to do it. With racing resuming in Salt Lake City, Forkner has emerged much improved, and he block-passed his way past Ferrandis to win this one, his second-straight victory.

“My trainer Robbie Reynard has put me through the ringer,” said Forkner. “You saw how good I was last year and he felt I wasn’t quite back to where I was before my ACL last year. We just needed to be better, and I guess it worked. Now two wins in Salt Lake, and just my riding—I was struggling in the whoops before and in the main today it was my strong point. Just a combination of all of these things. It’s crunch time, I have to win, I came into SLC focusing on nothing but that. Pressure for me is kinda’ off.”

The race win was hard earned, as Ferrandis grabbed a rare holeshot and led early (he says he hasn’t really improved his starts but his Monster Energy/Star Racing Yamaha gives him an even bigger advantage at altitude). Then Forkner did something that hasn’t been done in awhile in the 250 class, running Ferrandis down. It helped that Ferrandis double-doubled through a triple because he saw yellow flags and thought he had noticed the caution lights.

“I feel like I’m better than I was before the break, but on the race day it has been tough,” said Ferrandis. “First one was tough physically and bike with settings. Tonight, the main, maybe I’m just not used to being in front that soon. There was frustration it’s been a while since I got beat like that. No excuse, I don’t want to use any excuses.”

Ferrandis doubling through the caution section did aid Forkner, though, who saw it and then realized he needed to take advantage. A lap later he got around Ferrandis to take the lead.

“Yeah, I was being pretty patient I knew with those tight turns that lappers would come into play,” said Forkner. “I caught him pretty quick when I got around Craig, then we evened out. I saw an opening and I just went for it. The track, was, once we found that pace, we were even, so once I found one little thing, I had to pounce.”

Now Forkner is down seven points on Ferrandis going into the 250SX West finale next Sunday, run in conjunction with the East/West Showdown.

GEICO Honda’s 16-year-old sensation Jett Lawrence delivered on the hype with a podium from way back. In his TV interview, he said he was “lucky to be alive” and then clarified that those were “just words that came out of my mouth” because he was so overwhelmed with emotion for getting the podium.

“Yeah, I’m just happy to be alive and to be experiencing that I doubt many 16 year olds get to travel the world and race dirt bikes,” he said. “I had a terrible start, Dylan got the jump on me and shut me down. I was happy with the whoops out of the turn, they played in my favor. It took me awhile to pass my brother, it was a bit of a show to get around him. I didn’t even know I was outside the top ten, so to get this P3 is even sweeter.”

Cameron Mcadoo stayed closed to Lawrence all the way to the end to take fourth, with Michael Mosiman fifth, and Justin Cooper, who has moved to a distant third in points, taking sixth.