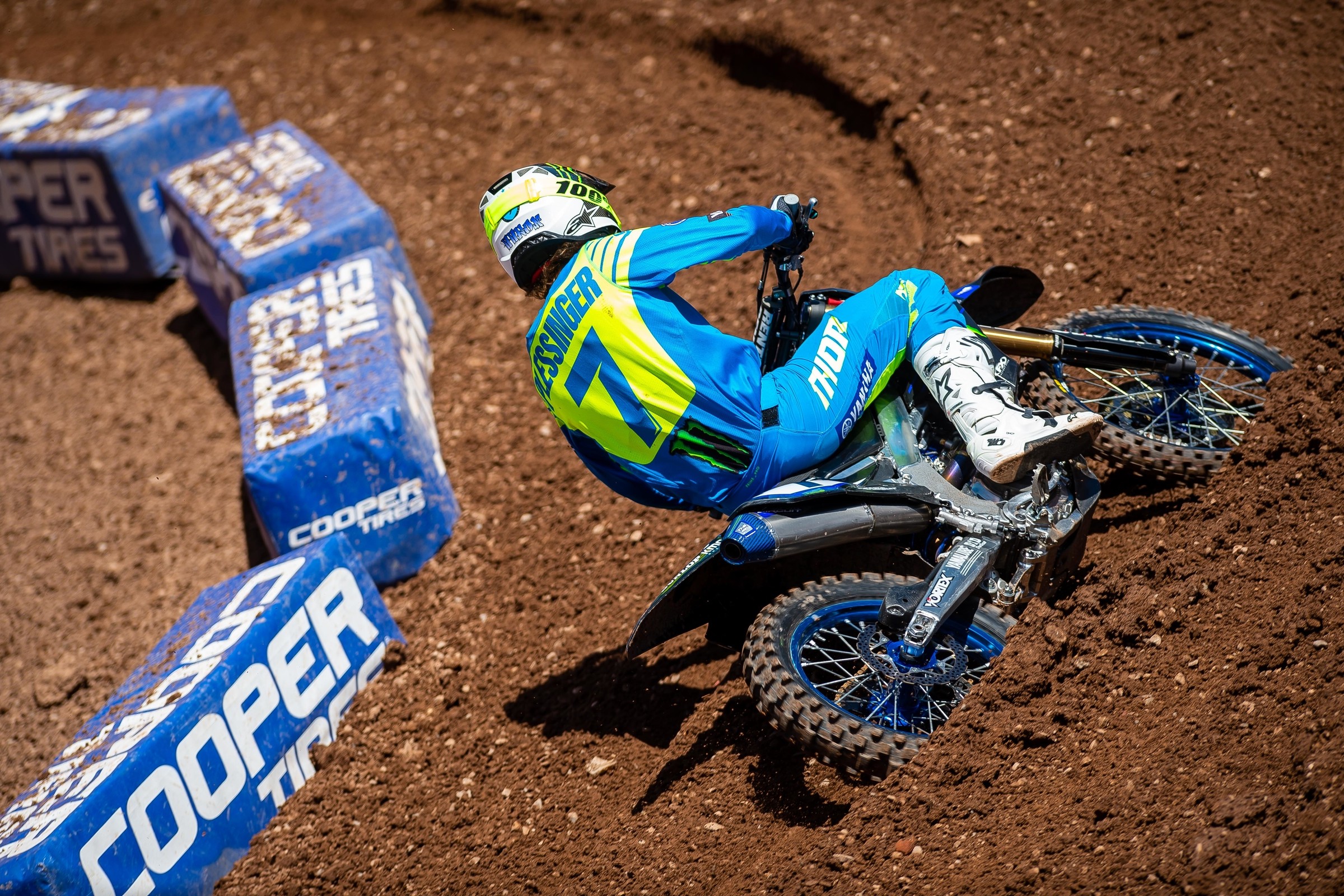 This approaching Wednesday will mark race day in Salt Lake City, Utah for the sixth consecutive time. Hamilton, Ohio’s Aaron Plessinger will be present front and center as part of the Monster Energy Yamaha Factory Racing Team that will try and make a run at victory Wednesday evening inside the Utah Utes NCAA college football venue.

Aaron Plessinger’s 2020 race season has not been bad, but it has also not exactly lit up the klieg lights of this nation’s sports stadiums either. Determined and quite aware of the immediate reality of his 450cc competitive surroundings in Utah, Plessinger has been toiling away, hoping the Salt Lake City dirt can provide him with high performance traction and trajectory as he looks to continue to move on up.

We caught up to Aaron the morning of the Sunday race, where he would ultimately end up 10th.

Racer X: Right on, Aaron. Thanks for taking the time to do this. How’s Salt Lake City treating you?
Aaron Plessinger: All good. I have fun doing these interviews. I’m just hanging out in good old Salt Lake City. I booked an Airbnb right in the middle of the city, and dude, it was hectic for the first few days. It was riots and protests going on. It was pretty crazy.

Really? Even in Salt Lake City?
Yeah, yeah. It was pretty wild. It was all going on right outside of the apartment, so I got the firsthand view of it all. It was pretty crazy. I have a balcony that looks onto the street and, man, I’ve never witnessed anything like it. But it’s going pretty good. Shoot, the city here is unreal. I’ve been mountain biking a few times and rode around the city and went up into  the mountains a little bit and the scenery is unreal, dude. The scenery is unbeatable. Race results I haven’t been too, too happy with. I’ve struggled off the starts and trying to come back through, you know? Trying to come back through the 450 pack is not an easy task. I’m looking forward to getting some better starts.

Yes, going back to the very first Salt Lake City race run on May 31, you’ve raced to 12-12-11-9 main event finishes. What do you make of racing inside the same stadium? As of tonight, this marked five straight races here at Rice-Eccles Stadium.
Yeah, it’s definitely weird not switching stadiums and just being in the same venue for so long, but it’s kind of cool, actually. I don’t know. I guess I’ve gotten acquainted with the stadium. I will say it’s really weird without fans, man. It’s definitely odd. You can hear everyone talking down on the floor, especially when we’re getting ready to start our bikes up—you can hear a pin drop out there. It’s pretty wild. It was awkward at first and we’ve finally gotten used to it. But it’s definitely weird. You can yell inside the stadium and hear yourself echo. It’s odd and definitely a new experience, for sure.

So with a race set for this evening, what have you done in, say, the past 24 hours to prepare and be ready?
I got up in the morning and did a little 30-minute spin and a little bit of stretching. Other than that, I’ve just been trying to hang out and enjoy the city a little bit and explore a little bit. I went grocery shopping today. I brought my Xbox with me, so I’ve been playing a little bit of that to kill time, but I’m not too good at it. It’s not so fun sometimes.

So you’re in Salt Lake City by yourself, huh?
Yeah, I left the family at home. I’m here by myself. Yeah, it’s definitely unusual to be here alone and not have the family here supporting me. I know they’re back home supporting me, but it’s a little different, for sure.

Broad stroke question here, but when taking a quick look back to the 2020 season-opening Angel Stadium round up to this evening’s round in Salt Lake City, what do you make of your racing season thus far?
My season. With my season, I was starting to get going, I guess. Things were starting to come around for me a little bit. I was pretty bummed when Indianapolis got cancelled because that was my home race and I think I was about to get a podium there, man. I was really excited. I had just got off a good week and I was super-bummed when the cancelled it. So far, I man I would like to do better, as we all do, but I have to take the positives out of every race and just go with it and just build off what I’ve been doing. I just have to remind myself every time that I can be up front and really put that into my head. These 450 riders are unreal riders out here. It’s no joke in the 450 class. It’s a struggle, at times. I’m not going to lie. I’ve been keeping it fun and keeping it light and I think that’s what’s been helping me come back happy at every race and keeps a smile on my face. You know, I definitely know I can do better than what I have been doing, it’s just a matter of getting off the line and pushing myself to get up to the front.

You guys live and die on your results. It’s a tough business.
Yeah, for sure. And as they say, you’re only as good as your last finish. It’s tough when you don’t perform like you want to.

The rest of the summer. What can you do? What can you achieve?
I mean, finishing off supercross, I know I can top five. That’s a no-brainer. I’ve been there before and I’ve done it before. It’s just a matter of getting that start and getting it up top. And for outdoors, I’m shooting for the stars. I want to get podiums and I want to get a win. I really love outdoors and I think it’s going to bring me and the team some good. And I think the fans will be there. That pumps me up because as you know, I am definitely a fan person. I love my fans. I’m really, really, really excited for that.