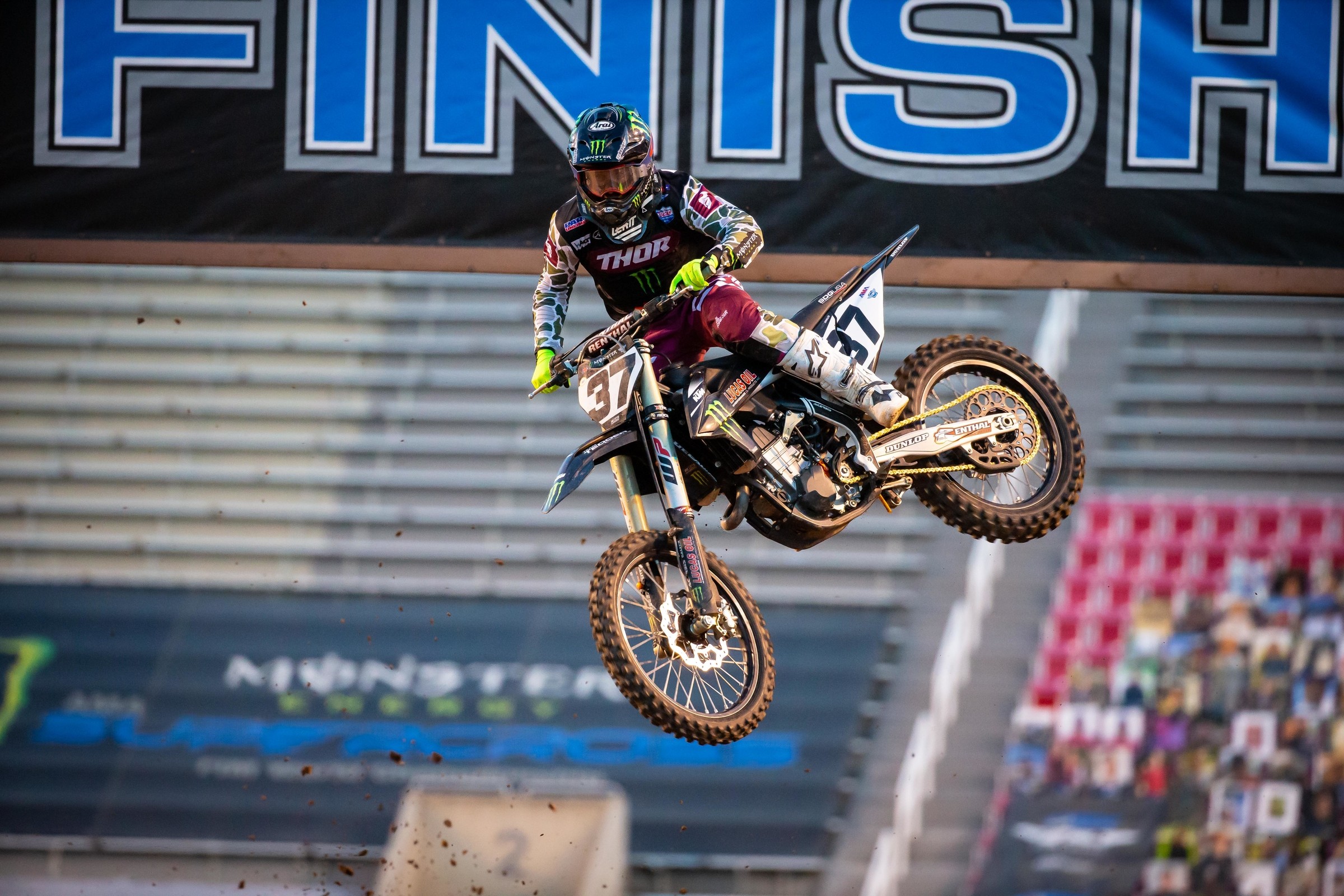 A few riders haven’t logged the results they want in Salt Lake City, starting with Monster Energy Yamaha Factory Racing teammates Justin Barcia and Aaron Plessinger. Barcia wanted to start this Salt Lake City run like he did the start of the regular season—by winning the Anaheim opener. Instead, he’s gone 8-8-9 and lost big ground in the standings. Plessinger has gone 12-12-11, which underscores just how deep and tough this 450SX field can be. These guys certainly want more. Can they find some magic? –Jason Weigandt

The 250SX West division went on hiatus after San Diego in February, leaving quite a battle going on for the championship lead between Dylan Ferrandis, Justin Cooper, and Austin Forkner. Ferrandis is now the points leader, with a seven-point edge on Cooper and a 13-point advantage over Forkner. Ferrandis has three wins, Forkner two, and Cooper one. Ferrandis definitely looked to have the edge on the field before the break, but it’s anyone’s guess how things will play out when the gate drops this Wednesday. –Aaron Hansel

Hunter and the Jett

We’ve seen very little from the Lawrence brothers in supercross. In fact, Hunter has yet to make his supercross debut in America, thanks to injuries, and Jett has only raced three in his life. He’s been great though, and in his last race, A2, he nearly won before making a mistake and breaking his collarbone and sustaining a concussion. The good news is, both are now healthy and will be lining up to race on Wednesday. It’s going to be fun to see how Hunter does in his debut, and whether or not Jett will find himself battling for the win yet again. –Hansel

If there was ever a team that’s due for some good luck, it’s JGRMX/Yoshimura Suzuki. The squad has been absolutely clobbered with injuries, and one of their active riders, Broc Tickle, is even racing with a broken bone in his hand! But with the return of the 250SX West division comes the return of Alex Martin, who could deliver some long-awaited and much needed good news for the team. If Martin can put it in the top five or nab a podium, it’ll be a nice lift for a team that’s been broken and battered all year. –Hansel

Before the 250SX West division went on break Brandon Hartranft was putting together a nice season. He’d podiumed (third) twice and had brought home an additional pair of top fives. He’s also fourth in the standings. Not surprisingly, with the Troy Lee Designs/Red Bull KTM team, he’s on the best equipment of his entire career. We’ll see if his run of good finishes continues on Wednesday. -Hansel

Last Sunday’s race was great. It was so great that I’d like to ask for another serving of that, please! Eli Tomac appears well on his way to sealing this 2020 championship, and even has the chance to wrap it up early now. But that didn’t stop him from going for the win in tricky conditions on Sunday. Add in Cooper Webb’s never give up attitude and we had a classic. The track this Wednesday is nearly the same track they just raced, but backwards. And although the weather will be quite different, it seems clear there are two men on a different level right now that could find themselves at the front again tomorrow. -Kellen Brauer

The first three rounds in Salt Lake City, Utah, have been good, normal, and bad for Ken Roczen, in that order. In just three races, the German has lost 23 points to Eli Tomac and Sunday’s race was the only time in Roczen’s career where he was lapped twice without falling. He has opened up about his struggles with breathing at altitude since arriving in Utah, and the successive races don’t seem to be helping his case. He needs a drastic turnaround to still have hopes of the championship, and it needs to happen fast. -Brauer

Mookie on the Move

Malcolm Stewart captured his first career 450SX class heat race win last Wednesday and followed it with an impressive top-five finish on Sunday. The consistent uptrend has him sitting a comfortable sixth in the championship and finishing with or ahead of his closest rivals. Obviously, he’s terrific in tall, technical whoop sections, and the blue grooved nature of the Utah soil seems to fit well with his technique in the whoops. Look for another night of good starts and battling with the front-runners from the SmarTop/Bullfrog Spas/MotoConcepts Honda rider. -Brauer

For most of his career, it was well documented that Jason Anderson struggled at altitude. He even needed to fly in the day of races in Utah and Colorado to not suffer from altitude sickness. Well, one week into seven straight races at elevation, Anderson appears to have no signs of slowing down. He spent the weeks leading into the race riding at altitude in his native New Mexico, and it culminated Sunday, with his first podium since round eight in Arlington, Texas. Now, the 2018 champ only sits 10 points behind Justin Barcia for fourth in the championship. He’ll look to close the gap to Webb and Tomac on Wednesday. -Brauer

Martin Davalos has been as good as advertised through the first three rounds back. He’s been the second best KTM rider in the 450SX class at all three rounds and has put up 6-11-8 scores along the way. He’s just been solid and could even eclipse Blake Baggett as the second best KTM rider in the standings with a few more rides like this. In a press conference on Monday night, Davalos expressed that he’s gotten more comfortable with the 450 power, and that altitude, which slows the bikes, helps him further. I feel like I’ve heard for years that if Marty just got on a 450, he’d be a mainstay in the class. Hmm, must have just been daydreaming. -Brauer