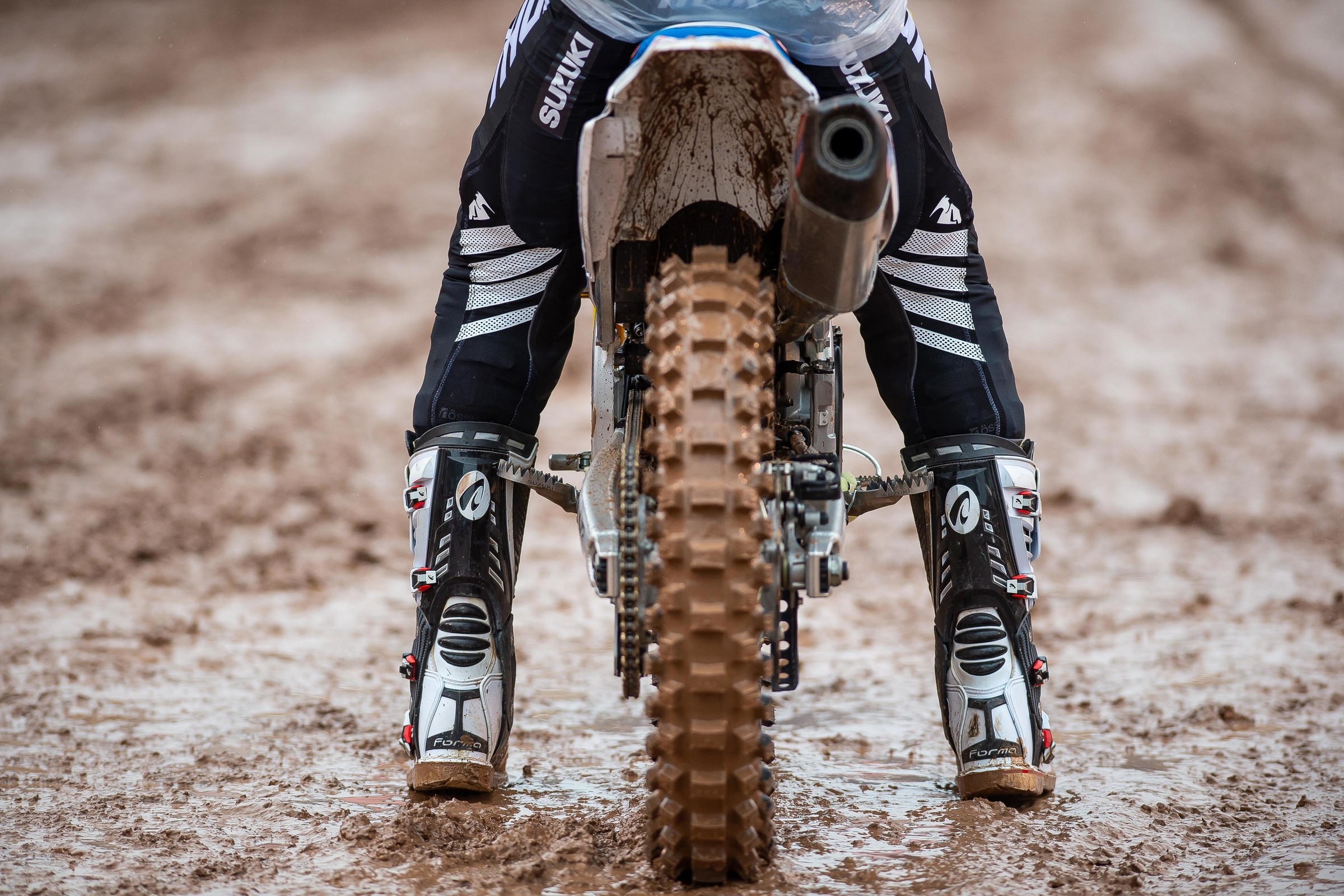 Salt Lake City round three was a tough one. Round 13 of the Monster Energy Supercross series didn’t look like a lot of fun as the rain fell, the qualifying practices were cut to just one and we nearly had a mud race.  Although rain fell during the 250SX main event and the track was rutty, square edged, and all that, it didn’t turn right into a full mudder. Still, very tough conditions for the racers and teams and as I sat up in the press box, I remembered what it was like being a mechanic in these days and I was quite happy being in the media, sitting in the climate controlled press box.

So, to recap, we’ve seen a hot, dry day race that featured wind and dust. We’ve seen great track conditions in a late-night race, and we saw rain, cold and a borderline mudder. We’ve seen it all through three rounds, now we just need some killer hornets to go with the COVID-19 stuff and we’ll be all set.

Let’s recap some uppers and downers from SLC 3, yeah?

Eli Tomac and Cooper Webb: I mean, they lapped fourth place! Hard to say they weren’t both winners here. Eli’s gone 1-2-1 in three races and Webb’s gone 2-1-2 so clearly both guys are loving this and just hammering the bonus money with these races so close together. They both put on a hell of a show pushing each other and swapping out the lead. It’s interesting, to me, to see Tomac in particular laying it on the line there with the big points lead. He mentioned in the post-race presser that the thought of him pushing it never came to mind. He said he never felt on the edge or out of control, it was fun and to him, it was a fine. Sure didn’t look fine to me! He looked like he was sending it but his level of “send” I’m sure is much higher than what I would ever know. Webb has to win every single race here to try and close the points gap, I get why he would do whatever it took to win but Tomac was busting out 3-3-3 rhythms in the middle of the race and with lappers everywhere, he was just on it!

Such an impressive race by both dudes, it was really something to watch them out there. Blitzing whoops, tripling stuff; just wow. Kudos to Eli Tomac and Cooper Webb for putting on a hell of a show. Wish there had been fans there to see it!

Malcolm Stewart was on fire last race. He won a heat race, crashed in the first turn and charged up to seventh. This week in the slop he was even better with a fifth place finish in the main event which was a career best. Yes, he got lapped but he was great. MOOKIE FEVER is here and it’s cool to see.

Sexton: Chase Sexton needs to mail Garrett Marchbanks a thank you card or something if he pulls off this title. You see, Marchbanks crashed and the red flag was thrown when he was complaining of back pain (looks like he’ll be alright) and Sexton, who was seventh after getting pushed off the track and then crashing, got a second chance. He made the most of it, as he pressured Shane McElrath for the lead, and then Shane went down when he hit a lapper. Credit to Sexton, he had caught the #12 before that happened. Then he took off for the win. What could have been a third or fourth went to a first just like that! Sexton even lost his front brake somewhere out there and still held off McElrath pretty easily. Great work for Chase and the team.

Star Yamahas: Yup, even though a Honda won, I’m still putting them in here. They’re that good. Wonder what it’s like to ride them?

Logan Karnow, who races 250SX West, barely got on Feld’s list of qualified riders for these 450 events. He then lined up on his 250 in the 450 class and he just made a main through the heat race! Nice work for the privateer on the PR-MX Kawasaki team, and this should help him Wednesday when the 250SX West series resumes.

Peters: Yeah the depth of the 250SX east class isn’t great but Kyle Peters can only race who lines up against, and right now, the Phoenix Honda privateer has doing a great job in the three races. He’s basically been the first guy after the top dogs and beats some of the other factory guys. Nice work!

Marty! Martin Davalos has put in good rides in all three mains so far and I don’t know, I’m just surprised at this because without a factory team pushing him every day, I might be inclined to think that Marty might not have done a ton of work in the 85 days off. But oh no, Davalos looks strong here! I’ve always believed in Marty’s 450SX skills and he’s showing it now.

There’s only one thing I’m not sure of in regards to SLC SX 3 and that’s Colt Nichols earring. Like, I used to have one in each ear so I get it. Jeremy McGrath had them so I got them because I wanted to be like MC. Clearly, I’m not against earrings per se, I’m just not sure where I stand with Colt’s George Michael-ish one he’s got. I mean, I am old so there’s that.

[Editor’s note: Steve, you’ve always struggled with the fashion forward guys like Nichols and his buddy Justin Bogle. The more you struggle the worse you look. – Weege]

Ken Roczen’s not-so-good SLC SX 2 carried onto this race. He didn’t start out as strong as the last main (when he was an UPPER for his first half of the race, my God was he fast!) but then it went badly. Like, really badly. Like, he got lapped twice, bad. Like, he finished tenth, bad. Roczen came out on social and said he’s got some sort of breathing issue going on since he’s been here and I can only assume that’s what he was struggling with again. It wasn’t good and he’s now 26 points down on ET. Wow, just wow. Things have really turned around haven’t they?

Guys like Tyler Bowers, Vince Friese and Ryan Breece haven’t been anywhere near the level they once were and they’re all struggling with the altitude here in SLC. We had Bowers on the Moto:60 Show the other day and he was saying it’s like you’re drunk out there, he can’t remember the track and the combos, etc. Can you imagine riding SX like that? Tyler went back down south to St George, Utah at a lower altitude to try and adjust his body but man, it’s amazing to see the effects these races are having on people (add Roczen to that list).

Jeremy Martin: Yup, JMart’s skipping the final two rounds of 250SX East because he’s going to point out and frankly, that sucks. As I’ve been saying for years, this class is badly broken and has veered a hard left on what it’s supposed to have be. Which is fine but the AMA can’t keep pretending that top riders taking dives and hurting the sport is a good thing. I understand JMart’s decision but there’s also a case for just moving up and believing in yourself to work your way onto a factory 450 team like other guys have done. Either way, whatever side you’re on, we have a national champion that’s sitting at home and everyone is fine with it. MAKE THE 250SX CLASS GREAT AGAIN.

GEICO Honda’s math guy: You see, J Mart could’ve actually rode another race, won it and still wouldn’t have pointed out. Sooo, yeah that’s weird why they wouldn’t do one more race. Maybe the calculator is broken?

[Note: We called GEICO Honda team and they said they had to set up the plan in advance—if JMart finished on the podium in the first two rounds he would have been in danger of pointing out by the third race, so they decided to go with a max of two races no matter what.]

Lappers: Yeah, like, I get it these guys aren’t as good as Cooper Webb and Eli Tomac but it’s jarring to see some of the names that were put a lap or two down by the top two guys. The floor here in Rice-Eccles Stadium is kind of small so the track’s not particularly long or wide so when you have a mudder and you can’t go much outside a line or two, wow that makes for some big time jams. Lappers affected the 250SX main event, they affected the 450SX main event, heck they affected a lot of things!

Weege: Yeah, that’s right. Weege was here and we were having a lot of fun but he had to go back to this “family” he has and now, because JT is doing TV spotting (which Weege was doing until he left, then he got JT the job) I’m left to sit in this giant empty press box and not be able to talk to anyone during the races. Who am I supposed to share my Observations with!? It kind of sucks and I’m mad at Weege for going home.

Thanks for reading everyone, we’re going racing again here and more columns will be coming. What else can we see here in SLC? Who knows, feels like we’ve seen it all already. Email matthes@racerxonline.com if you want to chat about his or anything else.