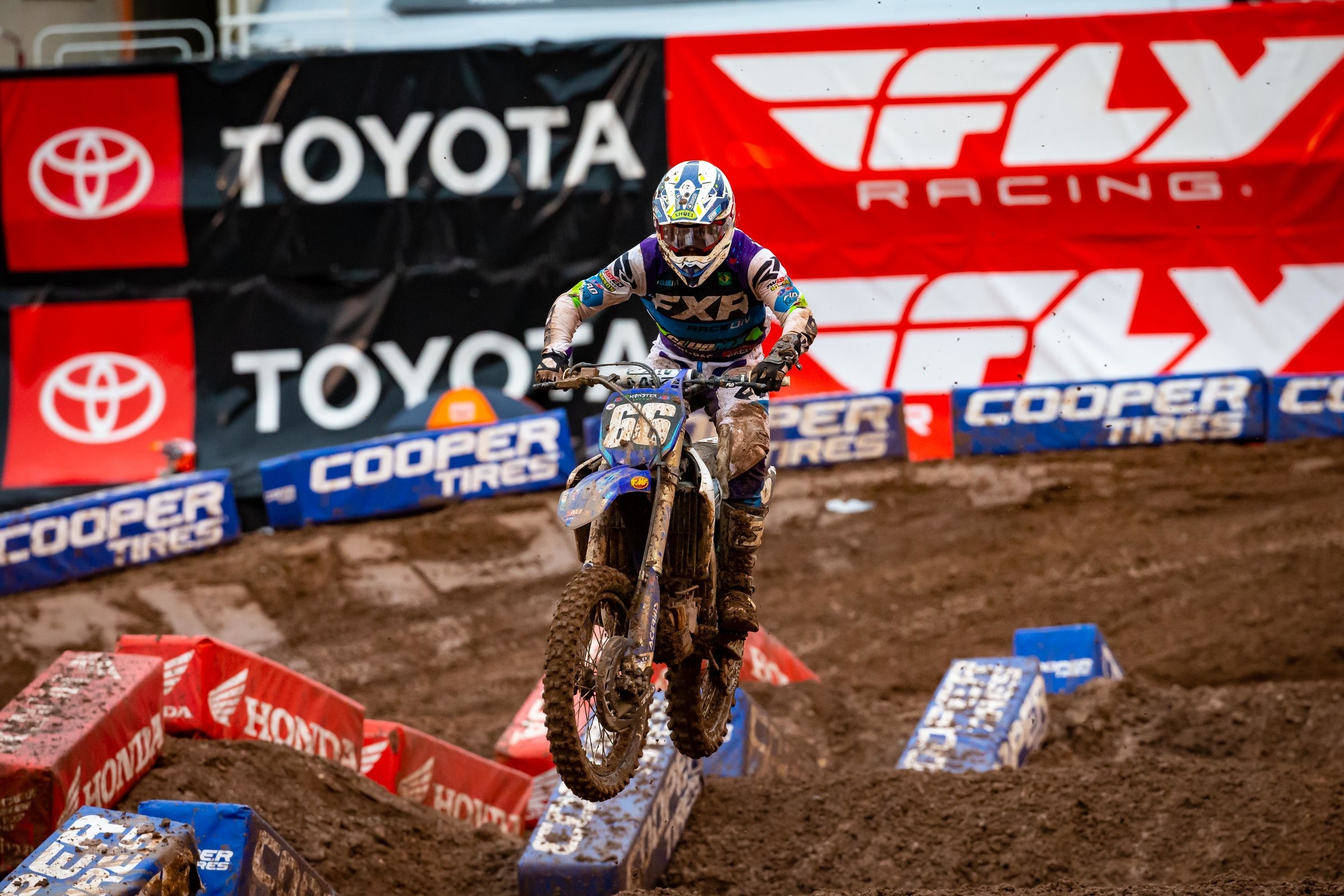 When Enzo Lopes gingerly walked off the track last Wednesday with a dislocated shoulder, it would have been easy to assume his supercross season had come to an end. With such a short turnaround between races and only three total rounds remaining for his coast, a race day decision was made by Lopes and his ClubMX team to get out there again Sunday afternoon. Lopes was clipped by Chase Sexton landing a triple into a turn early in the 250SX main event, taking them both down, but the race was eventually red flagged and restarted out of the gates.

In tricky conditions, the Brazilian managed to come home eighth in the main event at Salt Lake City 3. Afterwards, Steve Matthes caught up with Lopes to see how he was feeling.

Racer X: First of all, man, you put your shoulder out at the last race, I can’t believe you were even racing. How bad was it? How much pain were you in?
Enzo Lopes: Oh, it was really bad. After practice, I thought about pulling out of the race because it was really bad.

Really? So, you just got a shot and toughed it out, I guess?
Yeah, yeah. I took a Toradol shot before the heat and then got fifth in the heat. I got quite lucky with the mud because everyone was just kind of doing basic stuff, you know. And I like mud because it rains a lot in Brazil. So, yeah, to pull an eighth place still, it was really good. And I still crashed.

I feel like you’re good in the mud, right? In the past?
Yeah, before the red flag, I actually got my best start of the season and then [Chase] Sexton landed on me. I got pretty lucky there.

Yeah, you didn’t even see that coming, huh?
No, for sure not, because I went double single to the inside and he just tripled out. But then after the restart, I was in seventh behind [Kyle] Peters and [Jalek] Swoll, and then I crashed, and then [Chris] Blose passed me. But yeah, I mean eighth place was pretty solid you know after everything that happened. On Thursday, one day after the crash, I thought, “For sure I’m not doing this.”

It was such a gnarly track, but like you said, it almost helped you because it was just double-double-double. It was easy for you to do. Your shoulder was okay. The whoops were just doubles. So honestly, in a way Lopes, the track conditions, you were probably the only guy that liked it muddy like that.
Yeah, yeah, for sure. In practice, some of the guys were skimming the whoops and I was like, “Dude, no way I can do that.” So, practice didn’t go too well, I got like 22nd overall. But, as the rain started flowing down, I knew that we would be jumping whoops, so I was quite happy with that. Good thing we have ten days to rest now.

So, I’m guessing for you, you’re seventh in the points, J-Mart’s [Jeremy Martin] out, you could pass him potentially with some races. That’s why you’re racing, right? I mean that’s why you didn’t pack it in, you looked at your top 10 and kept going?
Yeah, for sure. After my crash, I was pretty bummed because I was going to be top five in the points. But, I mean, I’m still seventh and I can still get top five and that’s the goal right now. That’s why I wanted to try and race today and really happy I did it.

Do you think Phil’s proud of you?
No, I think it takes more than that. He’s never proud. [Laughs]

You’re probably right. [Laughs] Hey, thank you for the time, and good job out there, I’m impressed.
Thank you so much for having me. I don’t usually get to do this kind of stuff so it’s pretty cool.