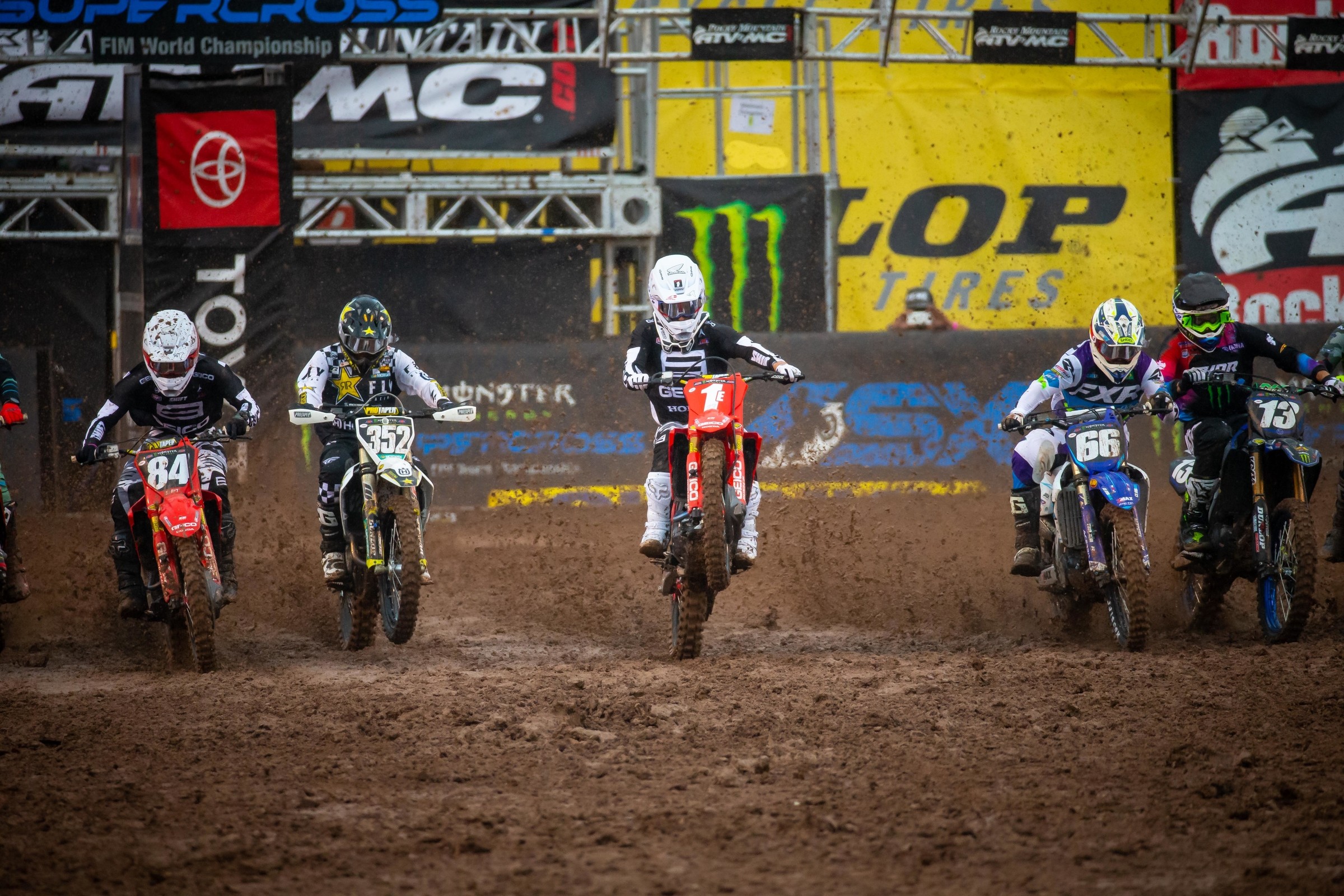 What a race! Eli Tomac and Cooper Webb were fired up for round 13 of Monster Energy AMA Supercross, and we were fired up watching it. So, we fired some questions at former pro Jason Thomas, who was there in Utah watching. Ready, aim, fire!

How do dudes double-lap the top ten and lap fourth place when some of the dudes from fourth on back were having great rides?

Tomac and Webb entered some alternate dimension, especially in the second half of the main event. Not only did they hold steady as the track deteriorated, they actually started going faster. They dropped into the 51s and 52s to end the race, while Jason Anderson and Zach Osborne were running 3-5 seconds a lap slower. Gaining multiple seconds a lap on the final podium finisher (Anderson) is not common. Tomac and Webb were feeding off each other’s intensity and began pushing harder and harder while everyone else was in survival mode. Crazy stuff.

Talk about the different rhythms and jumps Tomac and Webb were jumping and discovering as the race unfolded.

On a dry track, the rhythms they pulled would have been the norm. With the rain, ruts, and chaos, though, tripling through these sections was basically abandoned by most. The key is keeping an open mind during the main event so if and when those lines become viable, you’re ready to go. The track crew did a great job of fixing the ruts before the main event, opening up the opportunity. Tomac and Webb did a great job of seizing that opportunity, albeit with the risks involved. Watching them put the track together mid-race was cool to watch. The physical skill set is obviously required but the mental fortitude to re-think the track each lap is arguably just as valuable.

More impressed that Tomac beat noted late-race dueler Webb in a late-race duel, or that Webb hung with Tomac's speed the whole way?

I was more impressed with Webb’s speed. We have seen Tomac go into this mode before. He finds a rhythm that no one is able to match. There is zero hesitation in his riding and he just rips through the field or runs away from the pack. He can’t find that pace or rhythm every time out but when he does, we have just grown accustomed to tipping our hats and moving on. This time, however, Webb locked on and went with him. Webb elevated his pace, ramped up the intensity, and off they went. I was most impressed with Webb’s tenacity and improvement in the whoops. When most of the field had resorted to a very cautious approach, especially on their entry speed, the frontrunners were undeterred. Webb has suffered in sections like this before, giving up huge time through big whoop sections during his championship run of 2019. He seems to have shaken that weakness, though, making his game that much more well-rounded.

How much trouble is Kenny Roczen in? Like, not gonna finish the championship trouble or is that taking it too far?

It’s not looking good. I would be shocked if he didn’t finish the series because there is always series bonus money up for grabs (assuming on Kenny but most have top three championship bonuses). I don’t know what was different about yesterday for him, but that was by far the worst of the three SLC rounds thus far. If his condition is progressively getting worse, though, I guess this starts to make sense, as he’s gone 3-5-10 now in the results. He had to be in mental agony watching Tomac and Webb go by each time. After last summer’s struggle, this has to be very hard to swallow.

Limited practice, and some riders also skipped the sight laps to keep their bikes clean and light. How the heck do they send it so quickly?

These guys have done tens of thousands of laps on supercross tracks. Most of these obstacles are the same distances each week and at their test tracks. Once they memorize the track, the jumps aren’t all that different. For the elite riders, they can do these obstacles in their sleep. The real work is in lowering the lap time once a median pace is established. That was happening during the heat and main event where it would normally happen in the final qualifying practice. Some of the tougher combos weren’t jumped until the main event itself.

What's up with these Rockstar Energy Husqvarna guys?

Rumor has it that they made some big steps forward with the settings. It’s hard to discount that rumor because their improvement has been uniform across the board. All three of them (Anderson, Osborne, and Wilson) are qualifying better, racing better, and look more confident, too.

Advantage Chase Sexton or Shane McElrath with two to go?

I like McElrath for the same reasons we have been discussing for over a week now. The engine package of the Monster Energy/Star Racing Yamaha YZ250F is a HUGE advantage. They are getting the starts every single time, making the job that much easier. Further, McElrath now has an elite level teammate to help his cause if he needs it. Lastly, the showdown could highlight McElrath’s starting prowess even further. If he gets out front and Sexton is mid-pack or even outside the top five, it will be an absolute war to pass the influx of West Coast talent. I don’t think the edge is massive and Sexton even has a three-point edge as of now, but I like the variables McElrath has to work with.