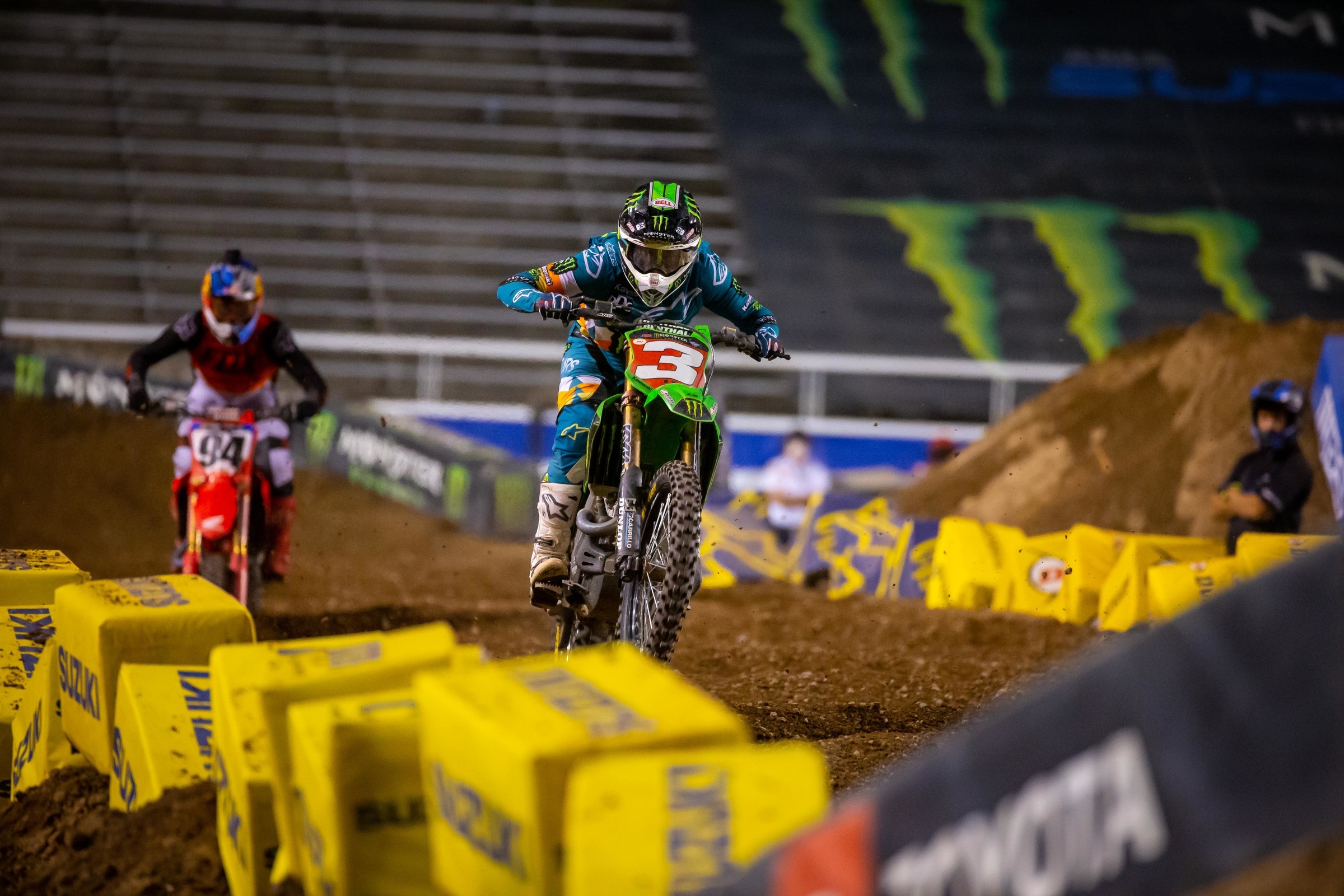 Our guys Steve Matthes, Jason Thomas, and Jason Weigandt are amongst the few media members allowed at the Salt Lake City supercross events at Rice-Eccles Stadium. After two races and a week in Utah, they give us an update from SLC.

1. What are your thoughts on track surface, layouts, and prep through the first two rounds in Salt Lake City?

Steve Matthes: Well the two races here couldn't have been any different really. It's the difference between a great burger place like, say, Five Guys, and something crappy like Chick-Fil-A. It was remarkable in track design, dirt quality and moisture. Some of it was due to the time of day for sure but overall the guys did a great job with Wednesday's race in trying to make it better. It's a tough deal for sure, you're working with the same base that just gets harder, the same dirt that's breaking down and we're at altitude, all a tough deal for the tracks.

Also on our pre-race media call with the guys at Feld Entertainment they mentioned that they weren't sure if they could make an all-new track every round but looking at the track maps, it appears that they have been able to which is cool.

Jason Thomas: There really wasn't anything similar between the two rounds other than the venue. We went from a windy, dusty debacle on Sunday and directly into a much more prepped, much more challenging layout on Wednesday. I believe Dirt Wurx learned a lot about the conditions and also about prep in late May/early June compared to April. To manage moisture on a day like Sunday, they would have to almost drown the track into submission. The most important variable, though, was the wind. With 25 MPH winds, there is only so much water hoses can do.

Jason Weigandt: I thought we were screwed after round one. The dirt was super dry, and the racing wasn’t very compelling. The riders hoped things would improve for a night race on Wednesday, but I was skeptical. Any stadium that holds multiple events—be it Anaheim 1, 2, and 3, or a supercross that takes place after Monster Jam—sees its dirt grow drier and drier.

Yet, it improved tremendously. Miraculously!

“It was honestly amazing how different the track was,” said Shane McElrath in last night’s press conference. “All day, the bike setup was the same as it was all day Sunday, but once we got to the night show, we had to change it quite a bit.”

The dirt was much better, and the track was more difficult, which was perfect because Wednesday’s obstacles with Sunday’s dirt would have caused serious problems. Wednesday’s track was great. Late in the race, Cooper Webb and Zach Osborne were using different options in the second rhythm lane, while also losing and gaining ground on each other as they jumped whoops. Behind them, Eli Tomac hammered over the top, gaining on some laps, losing in others. Options and variations right down to the end of the night, that’s all you can ask for. This bodes well for the rest of the races.

2. Which class (250SX East or 450SX) has surprised you the most in terms of championship swings?

Matthes: Well, the 250SX East Region just because everything changed with Chase Sexton's crash early in the main event on Wednesday. He and Shane McElrath have been 1-2 in the practices, they've won heats and they seem to be the top two dogs. So to see him get a fourth (from way back after the crash) and now being tied with Shane is the most surprising. It's a whole new ball game now with these two guys as they're tied. And McElrath's got some help with the returning from injury Colt Nichols. And we're at altitude. And the Yamaha's the two Monster Energy/Star Racing Yamaha guys have seem ridiculously fast up here. So, yeah 250SX East Region has been it for me.

Thomas: I haven't been all that surprised so far. If forced to choose, I will say I am most surprised by the impact of the Monster Energy/Star Racing Yamaha's at elevation. The power edge that they have shown has really swung the momentum towards Shane McElrath. His ability to start at the front consistently and jump the most difficult sections is adding an extra percent or two in a series that is coming down to marginal differences.

Weigandt: I felt like Chase Sexton had more control over 250SX East than Eli Tomac had over 450SX. Now it’s flipped, with McElrath grabbing momentum and points in 250s, while Tomac has pulled away in the 450s. So, the 250s have featured the biggest change. Sexton is still mightily capable but he has to somehow start ahead of McElrath, which will not be easy. Plus, with Shane’s bike almost guaranteeing him a good start, it keeps him out of the mess and away from mistakes like Sexton made on Wednesday. If Sexton manages to win this year’s title, he will absolutely have earned it.

3. How has the experience of such short downtime between races been for you and what has it appeared to be like for the riders?

Matthes: For me, a guy who writes and talks about the championship, it's been like getting into a Lambo and just flooring the throttle. We've been dormant for two months as we waited this thing out, producing some content but yeah, nothing like two races in four days. Columns, podcasts, talking to people have all been a big adjustment for me. Of course, we also have to get some e-biking in there as well. In watching the races, it looks like it's been very tough on some guys out there in terms of altitude sickness and just getting back into the swing of things and the guys I talk to say that the physical soreness hasn't been bad because it's SX and not MX but the altitude, yeah that's a different story for sure. Everything about these two races so far has been different for sure.

Thomas: I am running a bit ragged, honestly. Between visiting local Utah dealers as we launch our 2021 FLY Racing pre-book program, podcasts, articles, and going to the actual races, I am bouncing off the rev limiter. I knew it would be a whirlwind but as we finish up the first week of mayhem, I can admit it's been a bit more hectic than I expected.

As for the riders, this is a huge learning experience. Racing twice a week is a big adjustment and they will need to make changes to be prepared physically and mentally to be their best each time the gate drops. I think we will see these guys continue to make small tweaks in their schedules to make sure they are resting enough in between races. Some guys will get antsy and maybe put in a few laps on Friday but I really believe that rest is more valuable than hard work during this stretch.

Weigandt: I’m back home now after eight days in Utah. We’re not allowed to do media interviews in person at the track, which means all of my correspondence takes place over the phone or with Zoom calls. Why stay there for three weeks if I can get the exact same access at home? [This is not a complaint. Throughout this whole pandemic I’ve been preaching compromise. I understand why we have rules and I’m okay with it.]

Ten days ago, I was packing for this trip and figured I’d have tons of time to so stuff. I packed a gear bag full of dirt bike and mountain bike gear, I downloaded some new books, I really thought covering two races in eight days would feel like a vacation. Well, only a little. My buddy Shane Watts took me on a trail riding tour last Thursday, and I joined Matthes for e-bike life every morning. That’s like 2-3 hours of each day. The rest of it was the usual: sitting in front of a laptop, working. Poor JT, he asked Matthes and I to go out to lunch and dinner every day, but after one dinner on Friday night (with that Daniel Blair guy joining us), I ate every other meal in my hotel room. During Sunday’s race, I worked a 20-hour day (6 a.m. to 2 a.m.) just to be up early again Monday morning to post more stuff. As always, all we really end up doing it working. Which is okay, because our work involves dirt bikes. No complaints!

As for the riders, everyone was pumped on the Utah plan and they remain so thus far. Opinions could change over the next two weeks, as injuries and fatigue will build. But all of the riders in last night’s (virtual) press conference revealed that, hey, they normally ride during the week, but for the first time ever they just rode on a weekday for points and money.

“I think we should ride less and race more,” said Zach Osborne, now a big fan of the twice-a-week program.

Could be onto something here.