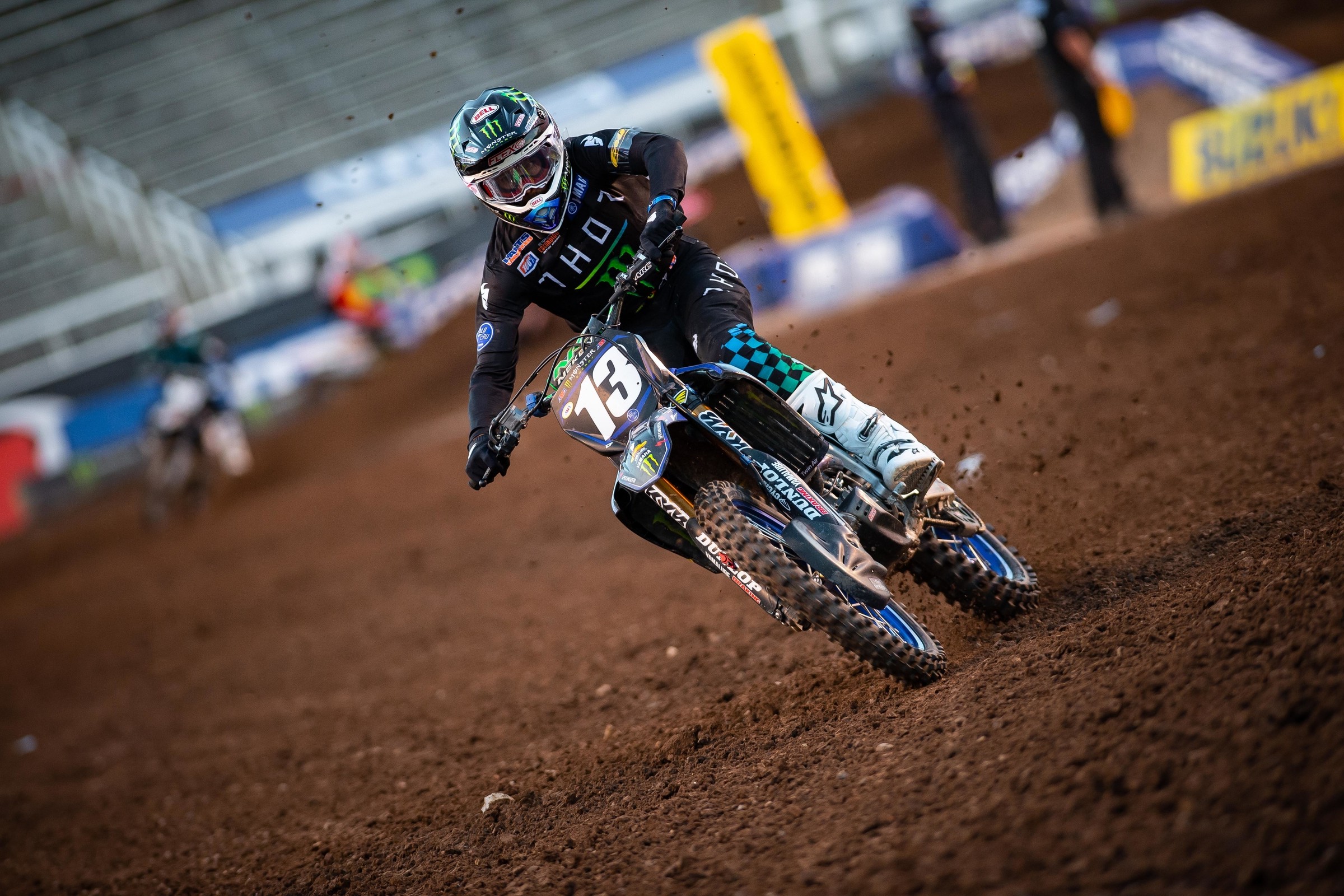 Racing is back, and so are questions for former pro Jason Thomas, one of the lucky 900 allowed to be in attendance for the first ever Wednesday night supercross. Here are our questions and here are his answers.

We saw Ken Roczen was fast in the heat race. Then come the main event, he didn’t get an ideal start but he was still dropping some of the fastest lap times of the race. Then he fell off of the pace of Cooper Webb, Eli Tomac, Zach Osborne, and Jason Anderson. Do you think this was from exhausting himself early in the night and just not having the juice to go the full distance? He seemed to have the track dialed early on but looked like a different guy around halfway through the race.

I think there was something going on with his endurance. He was either still feeling the effects of a tough battle last Sunday or the elevation got to him. We have seen several riders suffer from altitude sickness and overall fatigue already so it wouldn’t be a stretch to think he had some related difficulties. Remember, he had an incredibly difficult time last summer so it’s not unreasonable to think an energy level problem arose.

While we haven’t seen it in a main event just yet, we got a glimpse at Malcolm Stewart putting himself out front as he won the first 450SX heat of the night. He charged all the way from 20th on the first lap to seventh by the checkered flag. Had he not went down early, could he have been in the top group and possibly contested for the main event win?

Mookie rode incredibly well in that heat race. His strength in the whoops paid off, making a move on Webb and getting that first ever win. For the main events, though, I think he still has a step to take. The main events are just so incredibly long. Maintaining that last 1 percent of speed has been the only thing holding Mookie back and I am just not sure he’s ready to win a main event quite yet. He has the talent and the speed but to outlast Webb or Tomac at the 20-minute mark, well that’s a big ask.

How about the Rockstar Energy Husqvarna 450 team coming out fast in qualifying and then taking three of the top six spots in the main event. Can you see these guys all shuffling in the top spots to unintentionally impact the Tomac/Roczen battle by getting good results of their own?

For qualifying, yes. For the entire main event, no. As I mentioned above, these main events feel like an eternity when riding on the ragged edge. Those Rockstar Husky guys are all capable of getting into the mix but it seems that they need just a tad bit more to be there at the end. Even Osborne’s 20 laps of fury left him seven laps short of a win. If Roczen is 100 percent, he is just a bit better than those three in most scenarios.

They’ve only completed the second round of this rapid-fire style racing so everyone seems pretty fresh still—will this change on Sunday or are we still early enough in this to see too much fatigue from both the elevation and quick turnaround from race to race? If so, will the next round be a big deciding factor/when do you think it will come?

The extra day should help some. Also, they will all have learned a bit about how their bodies responded on short rest. It’s going to get more difficult as far as workload but I think they will all make adjustments as we move forward. The toughest part will be forcing yourself to rest. These guys are such hammerheads as far as riding and training, they often overlook the necessary rest. If they don’t rest, they will regret it on race day. This much racing doesn’t require a lot of work in between. It can very easily do more harm than good.

The dirt appeared to be so much better during Wednesday’s race than Sunday’s. Was this due to the main program being at night and therefore cooler temperatures or the way the track was prepped during the day and throughout the night?

I believe the biggest variable was the lack of wind. The wind was howling upwards of 25 MPH on Sunday. The dirt was nearly impossible to keep wet in that wind. The only chance would have been to absolutely flood it prior but that is a risky proposition. If the wind didn’t show, timed qualifying would have been a quagmire. The track crew was put in a tough spot on Sunday but rebounded nicely on Wednesday. As they learn the nuances of this stadium, weather, and dirt, I think we will see favorable conditions more often than not.

Also, staying on the topic of dirt: Holy crap what a whoop section! Riders were blitzing, riders were jumping, and some were switching between both techniques. How does one approach a track with a whoop section this long and gnarly? Are big changes made to make the bike more comfortable in the whoops? And how would this race have gone with this whoop section if the race had seen the dust and slick surface that it did on Sunday?

It really comes down to rider tendencies and what they feel most comfortable doing. Eli Tomac, Ken Roczen, and Blake Baggett love blitzing whoops. Cooper Webb and Zach Osborne love jumping whoops. Those riders will always defer to those methods any time possible. For Webb and Osborne, they were biding their time until the jump line came in. By the main event, it was prime. For Tomac specifically, he never gave up the blitzing method. He feels more comfortable and confident sticking with the blitz, even if it isn’t the most efficient line at times. Most importantly, forcing yourself into a method that doesn’t work for your skill set is a recipe for frustration.

Shane McElrath now has three wins to Chase Sexton’s two wins in 2020. He’s tied the 250SX East points up—granted on a night Sexton crashed and had to fight back—in a championship that was going Sexton’s way ever since after McElrath won the opening round. But now, McElrath is two-for-two in these opening Salt Lake City rounds. On the incredibly fast bike he’s on and in a city he has proved he can get wins in, has this become Shane McElrath’s championship?

I think it’s still wide open but McElrath seems to have an advantage thus far. It’s really hard to look past the incredible engine package that Monster Energy/Star Racing Yamaha has. This advantage is nothing new but at elevation, it’s only gotten more impactful. From the starts, to jumping obstacles more easily, to more torque through the whoops, it seems there is no end to the edge the Blu Cru has.

How much of an impact does Colt Nichols' ability to get his feet under him so quickly help McElrath in this championship battle?

It could prove to be a big deal! Points are at a premium with only a couple of rounds left. Case in point, without Nichols’ involvement, Sexton is still the sole red plate holder. Even worse, it looks as if Nichols will be a regular at the front of the field early in the races, forcing Sexton to pass. I believe that Sexton will beat Nichols more times than not but it’s just one more complication for the #1E.