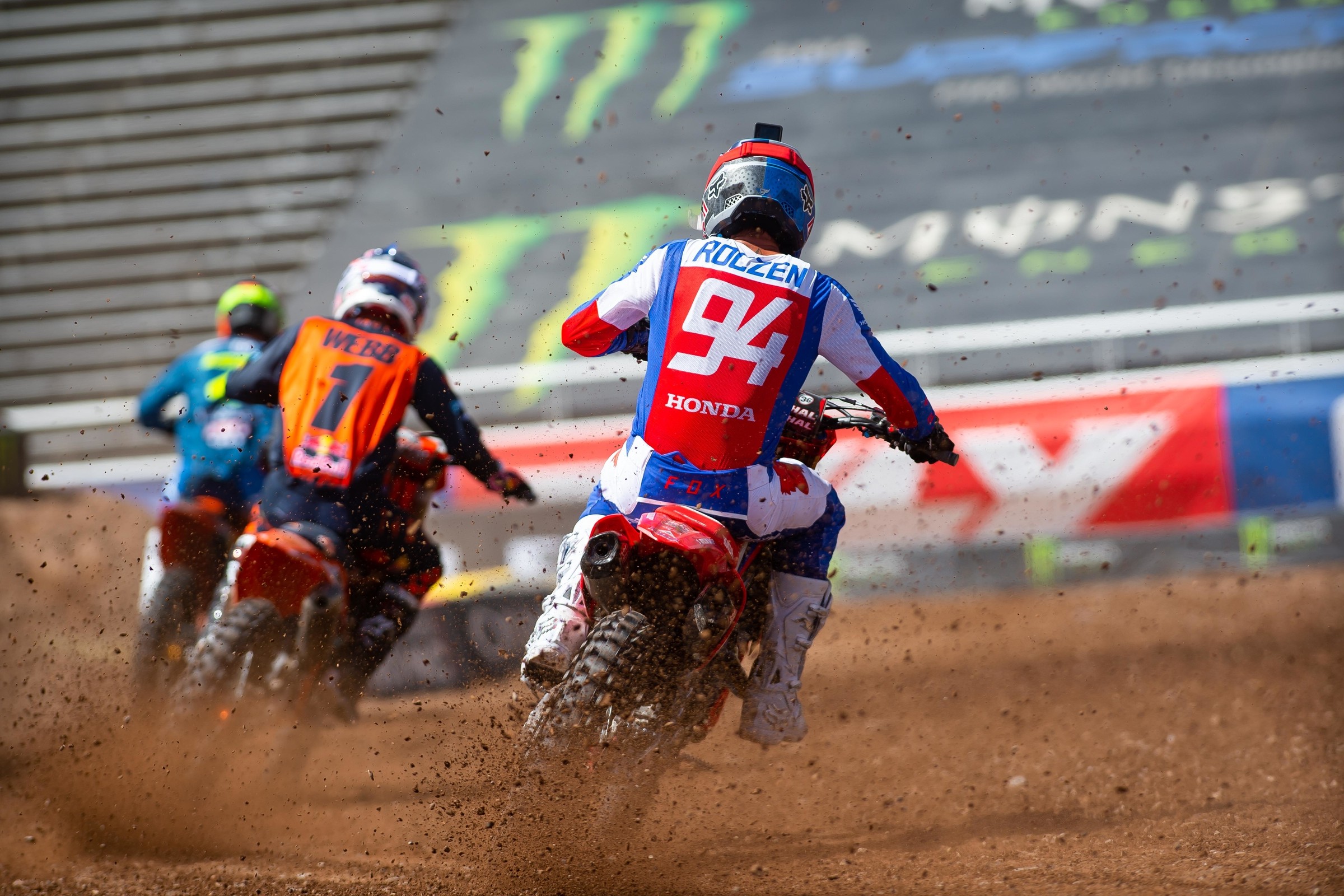 Feld Entertainment’s grand attempt to revive the 2020 Monster Energy Supercross Championship was not without a few rough edges, but all in all, the most-different-supercross-event-ever delivered what was needed: points-paying championship races. Further, no matter how different a socially-distanced supercross race might have felt, it resulted in familiar winners and podium finishers. The cream always rises to the top.

Took awhile for it to rise in the 450SX class, though. While there weren’t any fans on hand in Rice-Eccles Stadium, those watching at home live on NBC were treated to a great early battle between the three main title combatents. Monster Energy Kawasaki’s Eli Tomac, Red Bull KTM’s Cooper Webb and Honda HRC’s Ken Roczen passed each other while working through traffic, and at one point Tomac was on the ropes as both Webb and Roczen got around him. Meanwhile, Rocky Mountain ATV/MC KTM’s Blake Baggett and Honda HRC’s Justin Brayton were up front, and everyone got held up when Adam Cianciarulo went down hard in a scary crash that nearly claimed Tomac and Webb. Somehow, even Cianciarulo escaped without a major injury, but his race was over.

Meanwhile, Tomac went back to work, regrouping, then repassing both Roczen and Webb to get to third. By then, Tomac was in the groove and made short work of Brayton and Baggett to take the lead. Webb soon moved to second and did everything in his power to keep Tomac in sight, but in the end, Tomac emerged victorious in the first of a seven-race tilt in Utah.

“Yeah I don’t really know what was going on in the beginning,” said Tomac. “I was a little slow in that section by the finish and Coop got the slingshot by me. Then Ken made the next pass right there. I don’t know what the cause was early on, maybe it was just feeling out the conditions and those guys were just better early.”

Webb lost about four seconds to Tomac, then mounted a charge and tried to get back to him. Plus, he still had pressure from Roczen behind him, with all three pushing hard—within the limits of a very slick track—knowing points and momentum hung in the balance.

“It was tough to find that balance,” said Webb. “Like I told the team, you want to go faster and then you make mistake because it was so dry. It was about keeping your momentum and staying patient and hitting your marks. I thought I put in a good charge there but then I made a mistake and missed the rhythm and that really took me out of it. Once he got around me we played cat and mouse a bit, I mean, I was still a good ways back, but it seemed like one lap he would gain and the next lap I would maybe gain a little bit. Then with that mistake, he got an even bigger gap with a few to go. It was a hard charge, but definitely a hard main event.”

Roczen stayed close to Webb most of the way until a huge near-crash late took the wind out of his sails.

“Obviously this is not ideal, but I’m not stressing by any means,” said Roczen. “There’s still a lot of racing to go with six rounds. I left my bike the same as it was at sea level, and I think there’s some things we can try to give it more oomph to make it a little bit easier in some of the rhythms and stuff. So, I’m okay with it, I’m honestly glad to be healthy and on two wheels after that near get off at the end. Obviously Eli was really good for what the conditions were, he passed us and I couldn’t latch on to him.”

Baggett and Brayton faded after leading early, and the Rockstar Energy Husqvarna teammates of Jason Anderson and Zach Osborne came battling through. Osborne had a crazy race, and it started when his holeshot device exploded on the parade lap. His mechanic, Dave Feeney, got it somewhat reattached and Zach sped to the starting gate just a few seconds before it dropped. He then proceeded to put in a great ride, even passing Anderson at one point. Then he made a mistake and Anderson got him back for a hard-earned fourth.

“My day went pretty decent,” Anderson said. “I got a bad start in the Main and ended up fourth but all-in-all, I feel like I rode pretty well all day and was able to make some headway as we work our way into the next six rounds here in Salt Lake City.”

Osborne also told us that in the melee to try to get his holeshot device fixed, he forgot to swap out his parade-lap goggles for race goggles, which meant that he didn’t have tear-offs for the main!

“It was a positive weekend overall,” Osborne said about finishing fifth. “It was my first race back from injury so it was really good for me to go out there and get comfortable in practice. I feel really comfortable on the dirt here in Salt Lake, which is something that’s not typically my forte but it’s coming around for me. I’m happy with where I’m at fitness-wise and with my bike, so I’m looking forward to the next few races here – onwards and upwards.”

In sixth was a rock-solid Martin Davalos on his Monster Energy/Team Tedder machine. Baggett was seventh, and Justin Barcia a disappointing eighth. Brayton and Dean Wilson rounded out the top ten.

Somehow Cianciarulo was okay after a brutal crash in a rhythm lane on the second lap.

“Adam’s [Cianciarulo’s] thing, that was crazy,” said Tomac. “I watched it again and the way his bike and the rear wheel just bounced…that was just pure luck to make it through that thing.”

“Quick little update, obviously you guys saw me squirrel out and crash in that rhythm section,” said Cianciarulo. “Cooper ran into me pretty good there, he didn’t have anywhere to go, not his fault, obviously. I wasn’t able to finish, I didn’t have it in me, pretty painful at the moment, but I got it all checked out, internally and all that, no broken bones. That’s good. Tired of hitting the ground. I was just too eager being up front early, not having raced in a while…but yeah, same for everybody. I have to take accountability for that. I have to be better, that’s something I’ve always had to reign in a bit. I get excited and I really want. That’s it. We’ll fix that. First one out of the way, only up from here.”

One strange side-effect of the race without fans?

“Not having people in the stadium, you had to tell yourself this is real,” said Tomac. “It’s so easy to get fired up for the main event in the night show. So that’s what I had to focus on. It was surreal. I had to tell myself this mattered, you know? We kind of call it the Gladiator effect, right? You have the crowd and the people, the lights, the noise, the music, that’s what we were missing, getting you fired up on that gate drop.”

In other injury news, Broc Tickle crashed in the first practice session and broke a bone in his hand--the opposite hand that he broke the last time he raced! JGR/Yoshimura Suzuki's bad luck continues! Tickle told us this break isn't so bad and he might be able to race next Sunday. He is definitely not going to be ready for the next scheduled round on Wednesday.

In the 250 class, Monster Energy/Star Racing Yamaha’s Shane McElrath won yet another opening-round style race, a match to two career Anaheim 1 wins, and the win at this year’s 250SX East opener in Tampa. He holeshot the main and held GEICO Honda’s Chase Sexton at bay the whole time. This is, impressively, McElrath’s third win in this stadium.

“It’s just cool,” he said. “I’m on a Yamaha now, I feel like it’s one of the best 250s, and I feel good at altitude. It’s cool that I’ve won here three times, but I don’t think there’s anything special about myself riding here. Really I just thought it was a good race day and a good day to get back to racing. I feel good in this championship.”

At one point, McElrath was buried in lapped traffic and Sexton closed on him. Then the lappers slowed Sexton. They ended up lapping the fifth-place rider!

Garrett Marchbanks ended up third, passing Jeremy Martin (who again suffered from arm pump) with an aggressive pass, but he was unable to go with Sexton or McElrath.

Marchbanks had won the previous race at Daytona, but the long break took a lot of that away. “Going into Indianapolis, I felt like the momentum was on my side for sure,” Marchbanks said. “To come out here 85 days later and take a third, I wasn’t happy with it, but it was a good result and a good direction."

Martin hung on for fourth. Troy Lee Designs/Red Bull KTM’s Pierce Brown rode an incredible race to finish fifth. He crashed on the first lap in an incident with Jo Shimoda (it left Shimoda out of the race with a broken front brake), got going in 21st, and rallied to fifth. His crash did also take out Colt Nichols, who was returning from injury and racing for the first time this year. Nichols had to visit the mechanic’s area, and came back for 15th.