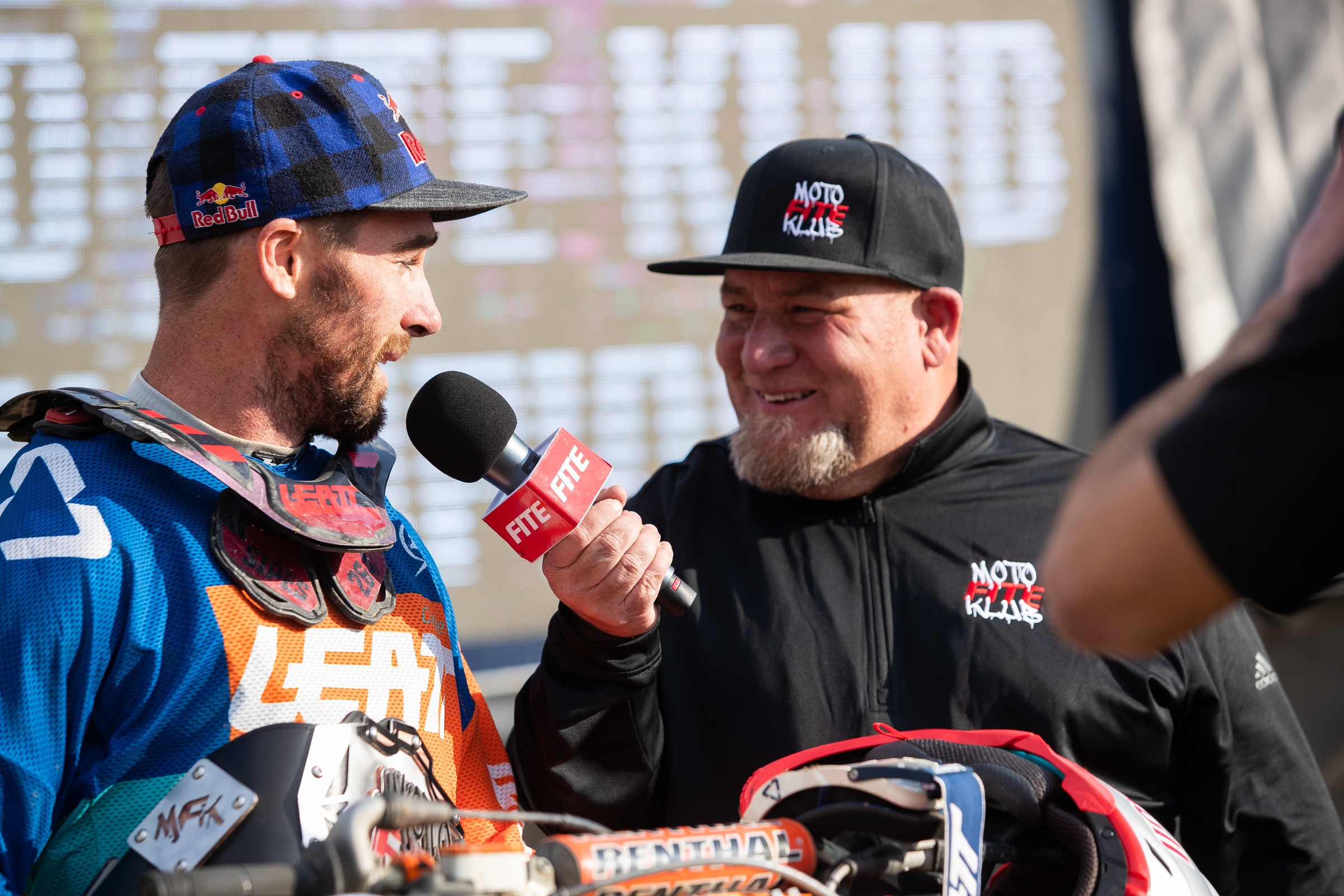 Moto Fite Klub actually happened! In a time of social distancing, with virtually no racing or sporting events going on anywhere, nine old-school riders got together to battle in an “undisclosed location” and have some fun.

In an elimination, head-to-head format, Mike Alessi took the win over Ryan Villopoto, and Ryan Sipes. We’ll have interviews with plenty of the riders, first up is Sipes and Jeff “Six-Time” Stanton.

If you missed the event, you can still watch the pay-per-view archive, where you can catch all of the racing action.

[Sipes eliminated Kevin Windham in a super-close battle, each winning a run before Sipes prevailed in race three. He met Villopoto and Alessi in the final and finished third, riding a 300cc KTM two-stroke.]

Racer X: Talk me through the day. Practice and then how these super fast, one-lap races went.
Ryan Sipes: It was kind of a blur, man. The track was cool. We got out there to practice. The biggest thing for us, this isn’t going to be exciting to watch if we can’t have good racing. So everybody kind of put their heads together. We have these insides be equal to the outside. It couldn’t have worked out better. There was a lot of places to pass. Once the racing started it was bam, bam, bam. I only took my helmet off once, I think. The most fun was racing K-Dub [Kevin Windham]. We were going at it. He can still fly. He goes fast. I made one little mistake, like I went a little bit too far outside a couple times and he just threw it in there. I’m like, okay. So he beat me in the first one. The second one, I had a last-ditch, hail Mary pass attempt and it worked somehow. I flat tracked around the inside. I guess flat tracking helped out! Ended up getting him, and then blew it in the last corner on one of those races. That was just super fun. The quick, one-lap races were cool. You had to be on your toes but you had to push. That’s the pace I like, when you’re just kind of pushing past your limit a little bit. That’s what’s fun for me. To get third is cool. I thought I would have a little bit more for those two top guys [Alessi and Villopoto]. They were just going fast, man. As the track got slicker, the two-stroke was a little harder to control. They were rolling. They were going really fast.

I was going to say. How did the two-stroke do? Obviously the only two-stroke in the main event.
Power isn’t the issue. This thing is crazy fast. It’s too fast. Jamie Ellis at Twisted Development built it, and it’s a monster. I even got a Steahly fly wheel weight to put on it just to try to calm it down more. It’s still good, but it’s not a 450. It doesn’t have that roll on, on the slick stuff. So when it got slick, I’m over here clutching it and it’s just spinning out. So, losing time. But if you have to pick a bike by how much fun you’re going to have, two-stroke every time. I figured for this kind of race, whatever. If I give up a little bit on the track it’s going to be way more fun.

The track was pretty basic. Where if anywhere do you think you excelled on?
I was good in the flat corner. Like I said, flat track probably helps out with that. I think at least racing K-Dub, he’s too old to scrub. He don’t scrub. He was already in his prime before that even started. So anyway, I was staying a little bit lower off the jumps. But he gave me an honest run for my money. It’s one lap. It’s not like you had to be in shape. He can still go fast. I was happy just to get out of that with a win. I didn’t want to be the wild card and have to go up against all those other guys. Super cool. I hope we do more of this type of racing. It’s super fun. It’s just different.

[Note: Stanton got to battle his old '90s rival Damon Bradshaw. Stanton led a bit, but Bradshaw took him down twice, then they decided to race one more time in a grudge race. Bradshaw, on a 450, beat Stanton each time, but Stanton sounded awesome ringing out a CR250R!]

Racer X: How was it to race with Damon Bradshaw again?
Jeff Stanton: It was awesome. Damon and I got such great respect for each other. We can go out there and pass each other and no remorse at all, no hard feelings. It was awesome. I’m just proud that him and I can be a part of this event. We’re no spring chickens here.

It’s been a minute.
I’m 52. He’s 48. So to be able to be in this class of athletes… Sipes and Windham, they put on a hell of a show. That was awesome. To be able to go out there and do what we did, it was awesome. I’m leaving happy and healthy and not hurt. That’s all I could ask for.

What made you go with the CR250?
I thought, you know what? Just that sound. How badass does that thing sound?

And the smell. It smelled great, too.
Yeah and the smell. That VP fuel, Maxima oil. I like riding it. Honestly, I’m not pumped on the 450. They’re so big and powerful. I’m over that stage in my life. So my bike of choice is a 250F. I love riding the 250F because I can just ride it hard, and ride it as hard as I want to ride. I don’t want to go as fast as K-Dub and Sipes out there anymore, and I’m not going to pretend that I can. But I can still go out there, do a little whip, enjoy myself and have fun.

What is next on the horizon for you? Any plans to do any more of this?
I told Rob Buydos - he got me involved in a pit bike race at a NASCAR race last year, and then got me involved in this. I said, “Dude, count me out. I’m done. I don’t want to push my limits anymore. Count me out.” I feel I can still ride pretty decent, but I enjoy riding. As long you ride a little bit you don’t lose that touch. So would I do another one of these? Absolutely! If the track was as easy as this one was and we could put on a show and do good things and raise money, I’d do it again in a heartbeat, with this core group of guys. This was a fun group to be with. Any time you get Travis involved and Kevin. It’s funny to hear them talk about it. They said the only reason I’m doing it is because of Villopoto, Windham, and Travis. They got followers like no tomorrow. Then I heard Travis say it a thousand times: “The only reason I’m doing it is because Stanton and Bradshaw are doing it.”

It takes everyone.
Yeah. Super pumped.

So how often are you riding?
If I ride once a week, sometimes a couple times a week. It just depends. I’m fair weather. I’m not going to ride when it’s hot and nasty and dusty. My son and I do some vintage racing. So every third week at least we’re racing vintage at a local track by our house. It’s still fun. I enjoy it. I went and did eight motos at the vintage race at Daytona. I still enjoy it. At this age and as long as we’ve been doing it, it’s in your blood. It’s never going to leave. I’m happy to be able to do it and enjoy it.

So you’re covering a pretty big range.
Yeah. The vintage thing you have to do that. They do it by year category.

So you can do a couple different classes.
Yeah. My next big purchase will be ’74 or older, true vintage, because I currently don’t have one of them. That’s next on my list. You kind of buy them and fix them up and redo them per however they set the rules in the series that you race.