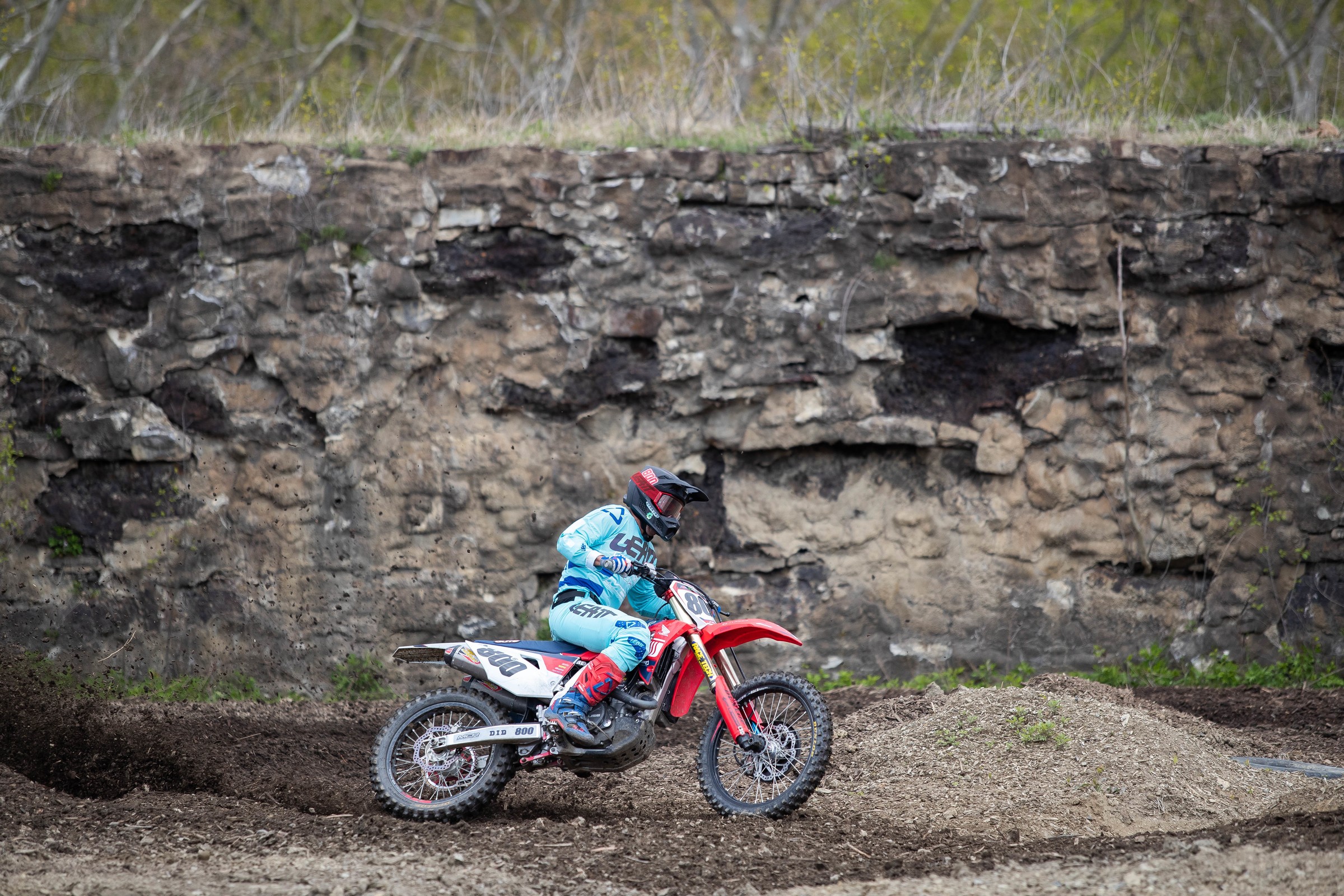 Welcome to the Race Day Feed, coming to you from an undisclosed location in the United States of America for the Moto Fite Klub. From yesterday’s live fireside chat to this afternoon’s program, you’ll find it all right here on the Racer X Race Day Feed. Updates are posted in chronological order, so be sure to scroll down for the latest info. For even more updates be sure to follow us on Instagram.

While we aren't sure where the Moto Fite Klub is taking place, we have received word that the track is mellow, being friendly for both younger and older riders and modern and vintage bikes.

Note: We are hearing Ivan Tedesco is under the weather and might not be able to compete tonight.

We've also heard there's a ramp setup at the track so Travis Pastrana can throw a backflip during the event.

We have a Racer X staff member on the ground at the undisclosed location to photograph the event (while remaining socially distance at a safe six feet apart from everyone). Here's a few pictures from practice earlier today.

The racing here at Moto Fite Klub will be underway soon. Beginning at 5 p.m. EST/2 p.m. PST, you can watch ten motocross legends race head-to-head in a friendly, yet competitive, battle for charity. Oh and bragging rights, of course!

And we’re off to the races with typical Pastrana craziness. Travis is riding Glover’s 1980s’s Yamaha YZ490 and Glover is on Pastrana’s RMZilla! At least the Zilla has a 2013 chassis, suspension and brakes on it. Well, the old bike, under Pastrana, looked good, and the old rider, Glover, looked sharp on Pastrana’s bike. Pastrana pulled out the win. Second race, Glover jumped on his 2020 YZ450F, but Pastrana began to pull away. Travis looked to make it a little easy on the 59-year-old Glover, and they came across the finish together! We’re not even sure who was credited with the win! So, they jumped on the starting gate again, Pastrana now on his RMZilla, and he pulled a big lead in the third-race showdown. It appeared Pastrana was going to take this one seriously and try to eliminate Glover, but then he tipped over! Glover repaid the favor and didn’t want to pass him, and that allowed Pastrana to take the win.Then, doing Pastrana things, Travis grabbed the YZ490 and tried to backflip it. And he crashed! Then he grabbed it again and pulled it off. Just typical Pastrana stuff.

In to the next round, Kevin Windham lined up with Pastrana, Pastrana now on his new KTM 250SX two-stroke. It was a heck of a race, Travis leading early, but Windham edged him in the final corner to take the win. Credit Windham’s scrub skills.In the next Windham/Pastrana race, Windham was sleeping on the line, and Pastrana took off. They battled hard again, side-by-side and stopping in some corners. Finally, in the final corner it looked like Windham’s 450 would allow him to make the pass—but Pastrana hung on to force a third run. Windham would defeat Travis in the final run with Pastrana backing off the pace to throw a backflip.

Huge Weimer/Sipes battle, Weimer with the early lead, but then got a huge kick on a jump and nearly went over the bars. Sipes made the move and hung on to take the win on his 300cc KTM two stroke. In the second run, Weimer got caught in the gate momentarily but then came right back to pass Sipes back! Sipes made another move and was able to hold on, winning both races to advance to the next round.

Next up, race one of Stanton and Bradshaw, and it was a duel, Stanton on a CR250 and Bradshaw on a new Yamaha 450. Bradshaw took the win in another close one. In their second race, Stanton cut inside of a hay bale in the second turn to steal the lead. He led most of the way but Bradshaw put the pressure on, and Stanton lost the back end in a corner. Bradshaw railed the outside to take the lead and the win, advancing to the next round. Stanton’s Honda two-stroke sounded good though!

Holeshot King Alessi destroyed the start as expected, getting a few bike lengths on Villopoto. That was that—Mike rode super hard and hung on to win. In the second race, Villopoto pushed even harder. Alessi grabbed yet another holeshot, but RV threw down a huge scrub to try to get him but couldn’t make the pass. Alessi then pulled away again to take the win. Look out for Mikey boy! Said Pastrana to Villopoto: “Why didn’t you take him out? I thought we were supposed to take people out?” “I’m trying!” said RV.

What a race! Sipes holeshot Windham on his two-stroke, then Windham made a pass, then Sipes sliced inside and pushed Windham wide and led into the last turn. They split the final turn outside/inside. Windham, using the outside, slingshotted around to make the pass for the win within inches of the finish.In the next race, Windham finally got his start dialed in, but Sipes found an inside line and made the move for the lead. Windham went on cruise control after that, and Sipes took an easy win. "Kevin owns like 12 Planet Fitness gyms, but he’ll be the first to tell you he doesn’t work out at any of them,” said Stanton.

Alessi is a damned cyborg out there. Or maybe a real robot, straight-up 100 percent machine. He pulled another holeshot and Bradshaw didn’t have a chance. Mikey is on a roll as long as he doesn’t run out of batteries. He then robotically beat Bradshaw again to go to the final.

After his second race against Sipes, Windham asked for a commercial break so he would have time to catch his breath, get a drink and eliminate the arm pump! He finally trudged back to the line, and gave Sipes another run. “I feel like my talent is there but my right arm is like a brick, and a two-minute commercial break doesn’t do much for us old guys!” said Windham. Whatever, he actually led Sipes early in the third run, anyway, until Sipes used the same inside line in the sweeper he used in the first two races to take the lead. Windham tried his outside slingshot in the final turn, but it didn’t work this time, and Sipes had the win, and a trip to the final.

Broc Glover got to pick an extra race just for fun, so he asked Villopoto and Pastrana to match up. Did you ever think you’d see these two race? Pastrana was fast, leading Villopoto early, but RV got inside, lines came together, and Pastrana went down. Then Pastrana threw in another crash for good measure. Grudge match win to RV.

This was the first race with three riders on the gate—Bradshaw, Windham and Villopoto. What a lineup! Bradshaw took the holeshot with RV behind him. Windham looked spent! Villopoto got around Bradshaw to win the battle of generations. This put Villopoto into the final via the LCQ, facing up against Sipes and Alessi in a three-rider shootout.

Sipes and Alessi made their way to the finals by winning rounds, Villpoto made it through via the LCQ. The final was a three-lap race. This time, Villopoto finally pulled the trick on Alessi and got the holeshot on him! But Alessi wasn’t messing around, he kept the heat on and finally made a move on RV to take the lead. From there, Alessi continued to cyborg it in route to the win. Villopoto held off Sipes for second overall.

"I had grand plans of winning the whole thing,” said third-place Sipes. “The boys, that was 100 percent. We were pushing to the limit. The [two-stroke 300] bike is fast, that’s not a problem at all, but it’s a little tough to keep it under control. But that’s two-strokes and that’s why everyone rides four strokes. With K-Dub, I came off the track and my heart rate was 200 beats! That last race wasn’t as exciting for you guys to watch, but those boys were pushing so hard man.

“I took a page from Mike’s book, I studied his starts,” said Villopoto. “Those three laps, that’s the hardest I’ve gone since I’ve retired. I want to thank all the riders, this was a team effort to get everyone to believe in the idea and execute it. Hopefully you’ll see us out here with another Moto Fite Klub.”

“This was all last minute, last two weeks,” said Alessi. “Really want to thank the fans and the riders. Ryan, we had our ups and downs through amateurs and pros, and he obviously got the best of me. He’s like the mini GOAT of motocross and supercross. All these guys—it’s just awesome to be a part of this. Want to thank Mike Genova, he’s been super supportive of not just me, also my dad. Everyone who helped me out.”