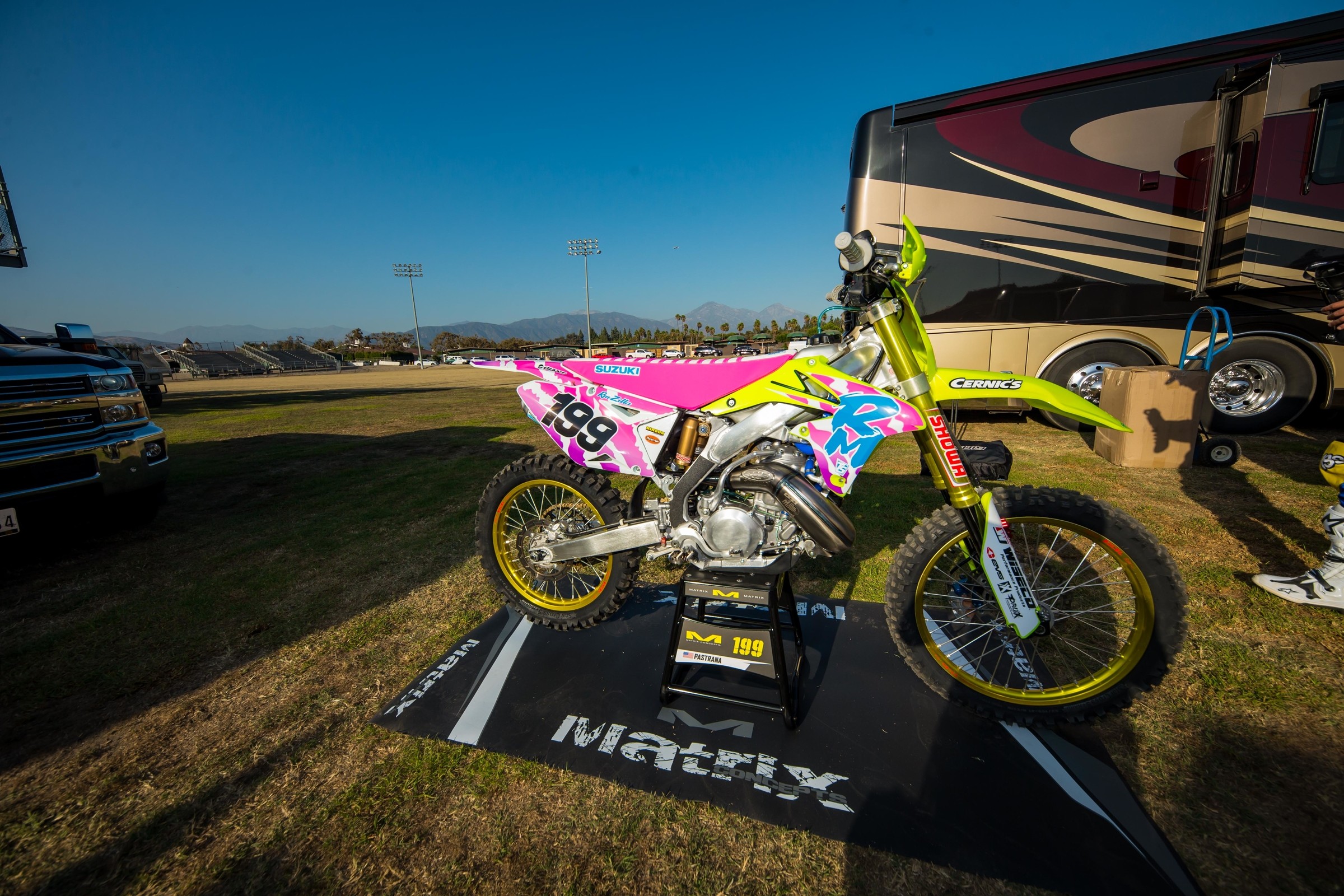 No one saw this Moto Fite Klub racing coming, but it’s here, with a free trash talk show tonight at 7 p.m. EST/4 p.m. PST and real racing tomorrow at 5 p.m. EST/2 p.m. PST. You can watch both the live chat tonight and the racing tomorrow with this link that takes you to the FiteTV Motorsports page for the event. Here are some key things we’ve discovered from a race with very little known facts!

THIS AIN'T NO PIT BIKE PARTY

No, this isn't just banging bars at 10 m.p.h. on pit bikes. These guys are really going to do battle and some of the chosen machinery is going to make this event all the more interesting to watch. Check out Jeff Stanton's choice at riding a mid-2000's CR250 below. -Kellen Brauer

Mr. Do It All Ryan Sipes is gonna do this as well, and who knows? Sipes doesn’t hold multiple AMA National Championships like some of these guys, but he’s still a fully active racer who seems to take pride at slaying the big names. This event could be perfect for him. We do know his bike looks awesome, as he explained in this walk-through video. -Kellen Brauer/Jason Weigandt

Come check out my @motofiteklub two stroke race bike. It was too pretty not to show you guys.

This race is going to feature a best-of-three elimination format but it's far from a simple March Madness bracket. It appears six of the 10 riders get a preliminary or first round bye with Pastrana, Glover, Stanton, and Bradshaw having to race their way into the first round. Then it looks simple with the eight remaining facing off to bring it down to four and then two riders. However, there will be a wild card round which, we believe, is a way to make sure the fans get to see the exact head-to-head matchups they want to see. It leads to a three rider Last Chance Qualifier with the second round losers. Those three will race one time to determine who makes it into the finale which consists of three riders as well. Fitting enough that a race that was born from last minute phone calls has one of the more convoluted brackets ever created. But hey, if you want the right rivalries, you’ve got to make it happen. -Kellen Brauer

One of the more notable prospects of this race is the difference in age, and in turn potential speed, of the competitors. Broc Glover will be the oldest competitor at age 59 while Ryan Villopoto comes in nearly half his age at 31 years old. Maybe the wilder stat is that fellow 31-year-old Mike Alessi still races professionally, albeit at more sparse events rather than full-time. Glover hasn't raced professionally since 1988, the year Alessi and Villopoto were born! It's not a guarantee that Glover will match up with either of them but it will be unique to watch if it happens. And don't discount the Golden Boy as those of you who have seen him around the paddock recently know he's still in terrific shape. -Kellen Brauer

It’s a racing rivalry so storied it now gets used as the yardstick for any rivalries since. You know how Adam Cianciarulo won piles of amateur titles but Cooper Webb ended up going next level as a pro? Yup, that’s continually referenced as a Villopoto/Alessi situation, as in Mike Alessi beating Ryan Villopoto consistently as an amateur but Villopoto turning the tables in the pro ranks. That’s not really accurate though, because Alessi/Villopoto was about much more than results. There was truly no love lost between these two in their early days, so that’s why Villopoto put some mustard on his torch-grabbing pass at Budds Creek back in 2006. Now Mike and Ryan and are willing to rekindle the old flame just for the fun of it. At least, we think it’s for fun. -Jason Weigandt

Okay, controversy and drama with the Alessi clan was not only reserved for the Villopotos. In 2005, Mike was second in 250MX points behind Ivan Tedesco going into the last round of the season, so he took Ivan out and tried to stand on his bike to prevent Ivan from getting back into the race. Yeah, it didn’t really work out for Mike, and his reputation never fully recovered. Now Mike and Ivan are willing to rekindle the old flame just for the fun of it. At least, we think it’s for fun. -Jason Weigandt

Watch below, at around the 3:30 mark in case you don't remember:

This is ironic for a man known for block passes and rough riding. Damon Bradshaw’s most constant rival was Jeff Stanton, but those two always kept the battles clean. Be it side-by-side all day during motos at High Point, or tussling down to the wire for supercross championships, Damon and Jeff logged some amazing races in the early 1990s, but it never went over the line. Perhaps Moto Fite Klub is the first time Bradshaw finally pulverizes Six-Time the way he always ran it in on Jeff Matiasevich. Or, maybe Bradshaw aims his front wheel elsewhere. Either way, you’ve got one rider who enjoys dishing out contact, and another who couldn’t be moved if you tried. -Jason Weigandt

Travis Pastrana is in this race, and he’s bringing his new KTM two-stroke and his old Suzuki RM-Zill 500 as well. Pastrana is the biggest wildcard in the history of wild cards. He doesn’t need built in rivalries for motivation or to put on a show. He is a show all by himself!

By the way, longtime friend and mechanic Hubert Rowland looks (and sounds) to have Travis' KTM dialed in, as you'll see (and hear) below. -Jason Weigandt

Thanks @nitrorednekhubert !! probably not gonna get faster or be in better condition at this point. Time to load up so I don’t hurt myself ???????????? @motofiteklub is next week boys! @canvas_mx @alpinestars @bell_powersports @redbull

Steve Matthes just couldn't get both now-Yamaha teammates Ryan Villopoto and Jake Weimer on the PulpMX sponsorship program, but he did land Weimer. Even so, Villopoto was left in charge of graphic placement duties on Weimer's bike:

Rumor has it that @kevinwindham.14 will be in his full Forrest Gump costume at #MFK.

We’ve seen only a smidge of the gear and graphics combos these guys are running, but we’ve heard there will be some good ones. And the gear will be donated to charity. Keep an eye on Road2Recovery to do some bidding. -Jason Weigandt

The trash talk has been pretty good on Instagram, but it’s going to get better with tonight’s Fire Side Chat—which you can watch tonight for FREE. The riders will enjoy meals and a hangout while telling old stories, the kind of stuff that’s probably happened a million times, but never on a live broadcast. It’s a good warmup over a few ice cold beers, right? -Jason Weigandt

The one rule about Fite Klub? No one talks about (where) Fite Klub (is taking place). The riders have only told us the race takes place in an undisclosed location, and we’ve heard the track is pretty basic, so as the keep the racing close, and to make sure older bikes aren’t at a disadvantage. Also, we’re not sure what tracks or track crews are even open or available, so that’s a factor too. These guys are going to make the best of it. As for the weather…we’re unable to find a forecast for undisclosed location! -Jason Weigandt