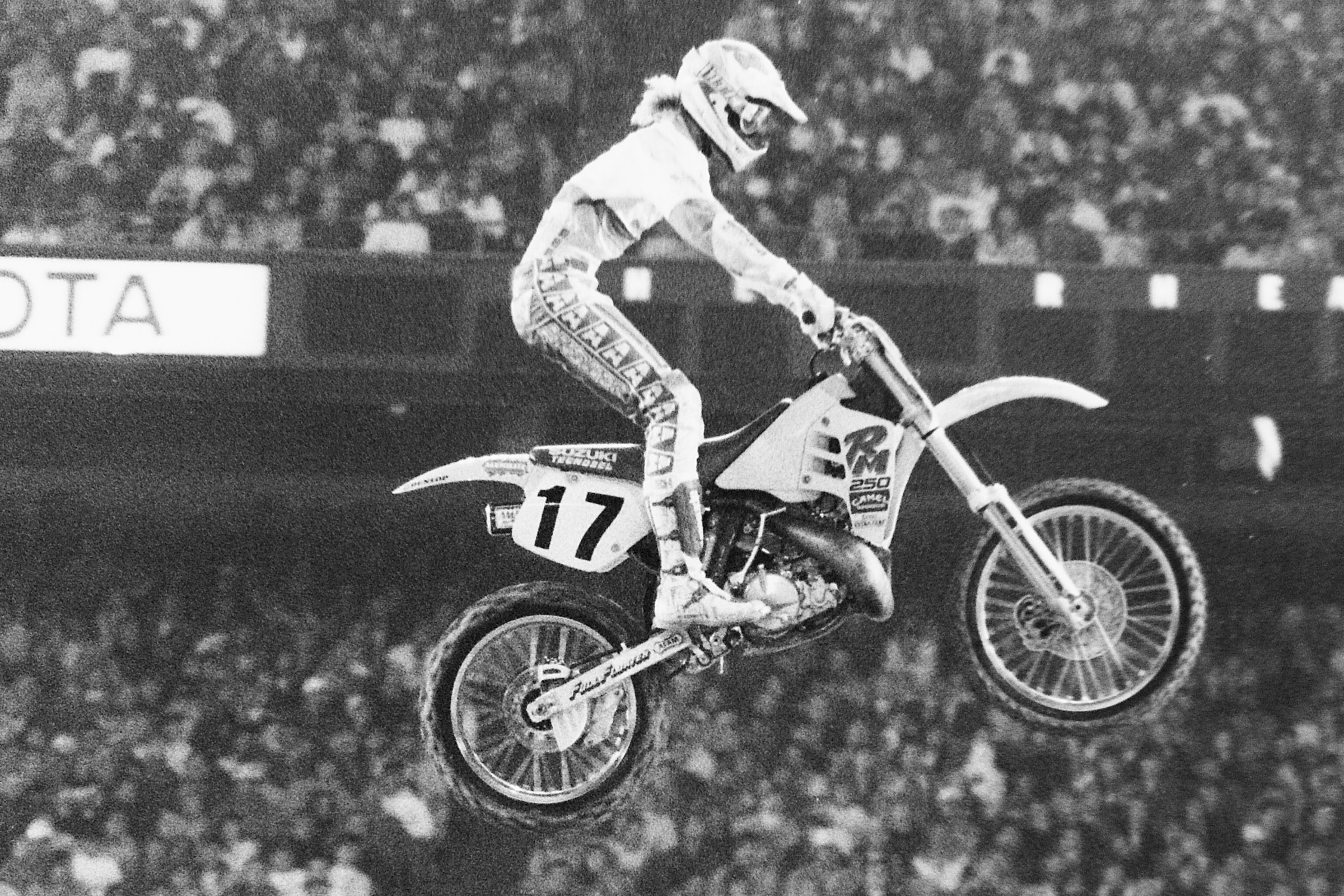 How shocking was the 1990 Seattle Supercross? The Cycle News headline said it all.

Seeing a Ward win a supercross race was nothing new, but all of those wins were generated by two-time AMA Supercross Champion Jeff Ward. In 1990, Larry Ward, no relation, was just a 19-year-old rookie in the 250 class, and he had never won a 125cc supercross. Further, he was on a Suzuki RM250. Team Suzuki had not won a 250 supercross main event since the Mark Barnett days, seven years earlier!

So, many surprises on this night, but two factors magnified the experience even further. First, Ward was born and raised in Washington, so the fans were going absolutely out of their minds as he charged for the lead. Go back and watch the race on YouTube, and you’ll hear the cheers of 38,000 people on hand as Ward closes the gap.

Then, it got nutty. Ward had to catch the race-leading Jeff Matiasevich. Battles for the lead are commonplace in supercross, but this was 1990, the absolute peak of the block pass/brake check wars. Matiasevich and his arch-rival Damon Bradshaw were the primary instigators of this behavior, as they would rather wreck people than merely roll over and accept a loss. Especially against each other! Bradshaw and Matiasevich entered the 250 (premiere) class together in 1990, Matiasevich as the 125SX West Region Champion and Bradshaw as the 125SX East Region Champ. A rivalry began as soon as the first heat race of the 1990 season in Anaheim, when Bradshaw, about to crash in the whoops while leading, chucked his Yamaha right at Matiasevich’s head to try to stop him from passing.

Now, young rookies doing crazy things is nothing new, but there was a difference in ’90: the rookies were winning! Bradshaw won the first two rounds and held the points lead early in the season. Then he crashed leading round three, and Matiasevich held the lead for most of the season. Vets like Jeff Ward, Rick Johnson, and defending champion Jeff Stanton took a while to get rolling. The young kids were winning big, and setting the tone with their aggressive riding styles. They weren’t alone.

“There was a whole crowd of us who came into that class that year,” explains Ward. “[Mike] Kiedrowski, Matiasevich, Damon [Bradshaw], Mike LaRocco, and myself, and we’d all raced against each other for years. We’d all fought and had rivalries and everything.

“Our whole entire life, everything revolved around a dirt bike,” adds Ward. “And the generation I grew up in, our dads never told us to talk it over and come to a mutual decision. Our dads would say, ‘Go punch that SOB in the mouth.’ Our dads taught us to be a little tougher back then than what’s socially acceptable now.”

So, in Seattle, as Ward started attacking Matiasevich, Matiasevich mounted a counter attack. The whole deal lasted just one lap, but it was enough to get the crowd going. After the duo cut inside and outside of each other several times, it culminated when Matiasevich, who was stuck on the outside and about to get block passed, stopped, cut across the inside, and then stopped his Kawasaki again right in front of Ward. Then he aimed, gassed it, and punted Ward off the track. Think the Seattle fans were happy with that?

From about a dead stop, Ward and Matiasevich battled through the next whoop section, then Ward got next to Matiasevich again, square back under, and took the lead.

The strangest thing? While these two are jamming on the brakes to block each other, the rest of the pack is still not catching them.

“I don’t know how, but Matiasevich and I were a lot faster than anyone that night,” says Ward. “In the main we were literally stopping, braking, and waiting to ram each other and we’re still like a whole straightaway ahead of everyone else. I still don’t understand why we were so good that night!”

To just add a little tone to this whole deal, the only other rider really charging to the front was Jean-Michel Bayle, but just as he tried to take third away from Ron Tichenor…Tichenor gave him a brake check and Bayle went down. Welcome to 1990 everyone!

You can see how eras evolve by watching early ‘90s supercross. Bradshaw and Matiasevich were front runners from 1990-1992. In 1993, a new rookie, Jeremy McGrath, came along and started winning races without touching anyone. The front runners always set the tone, and with McGrath’s success, brake checking, ramming, and takeouts faded away.

Back to Ward in 1990. He pulled away from Matiasevich and hung on for the win, an absolute shocker.

“But in all honesty there’s no way in hell I would have dreamed I was going to win,” says Ward.