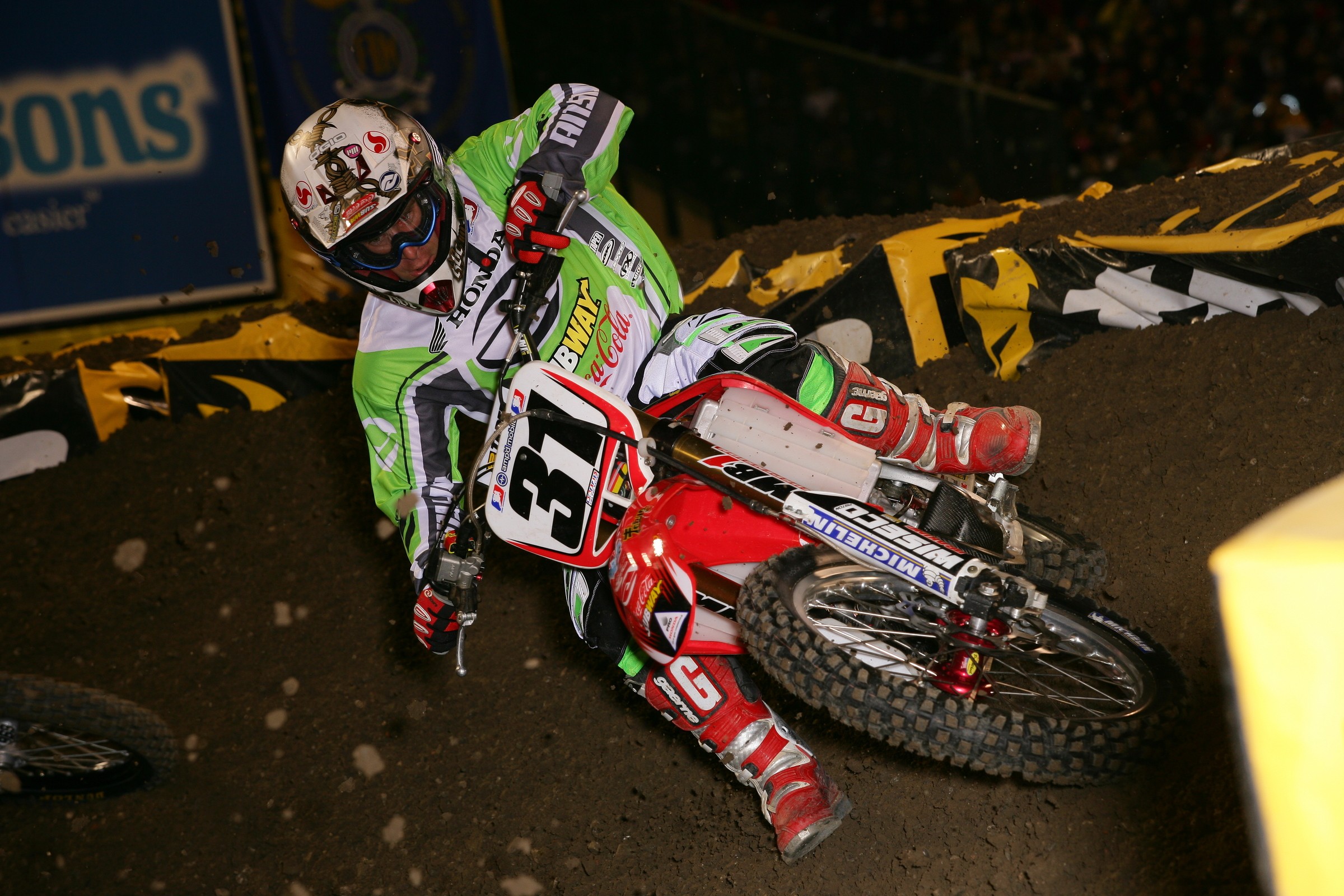 With the 2020 Seattle Supercross canceled, we’re focusing on other key races that took place in the Emerald City. Our own Jason Thomas raced professionally in AMA Supercross from 1997 through 2012, making 131 premier-class main events.

He shares some stories from within the ranks from Seattle.

Growing up in Florida, Seattle felt like the other side of the world. The first time I raced there was in 2005, the series’ first venture into the brand new stadium built for the Seattle Seahawks. It was a marathon flight across the country, nearly the same distance for a race in say, London, England. I was always blown away at how different the topography was than my usual Florida scenery. The fir trees and mountainous skyline gave a completely different feel than any other race on the calendar.

As for the stadium, they forgot to add a roof! Seattle’s spring weather is difficult at best. Rain was always a worry when the series headed northwest but the first year, 2005, we were lucky to avoid it. That season, I wore the helmet camera for the television broadcast. It was heavy and very inconvenient but it gave the team extra exposure and I have always been one to try to think “big picture.” As we barreled into the first turn of the main event, I remember getting a good start and seeing a huge collision in front of me. James Stewart, Chad Reed, and Ricky Carmichael all collided, sending Reed over the berm in a heap. The chaos left me in fourth place on the first lap but that would be short-lived.

As the 2005 main event continued, I was shuffled back by Mike LaRocco, Ernesto Fonseca, etc., but I found my stride once Tim Ferry caught up to me. I practiced daily with Ferry and felt comfortable following him around the treacherous Seattle track. I latched onto his rear wheel for the final few laps and brought my CRF450 home in 11th. The funniest part of that was years later, Ferry would tell me that he pondered retirement as he was following me around the main event. He said he mentally walked through his financial situation for around 10 laps, trying to decide if he could quit racing that very night. I was riding my heart out, battling for a top-ten finish. Timmy was riding behind me planning his 401k strategy. Perfect. Might I add that Timmy was getting his pit board messages from Matthes?

Watch the start of the 250SX main event from the 2005 Seattle Supercross below, starting at the 25:30 mark:

The very next year, 2006, we were not so lucky with the weather. It rained the entire time I was in Seattle that weekend. It was raining when I landed, rained during the race, and rained as I lifted off from Sea-Tac Airport. The racing was slow and plodding as mud would dictate. Going into the weekend, I was embroiled in a privateer points battle with Ryan Clark and Jeff Gibson. Nick Wey had the top privateer spot locked up but the second and third spots for the 25K-15K-10K payout were up for grabs. One of us three was going to be left empty handed when the series wrapped the following weekend in Vegas. I was on the outside looking in (fourth of the four) as we entered Seattle and I remember a bunch of media interviews being done with the other three (Wey, Clark, and Gibson). I was like two points out of third and four points from second. I distinctly remember being so pissed off that I was excluded even though it was such a tight race. It’s funny to think back now on how angry I was and slighted I felt but riders use all sorts of things for motivation.

I knew that the big key would just be to qualify in the Seattle quagmire. Mud creates chaos and I knew that one of us three (Clark, Gibson, and myself) could possibly not qualify in the muddy mess. I was able to qualify out of the heat race and watched my teammate Gibson also qualify. Ryan Clark would not be as fortunate, giving up valuable points as he was forced to watch the main event.

My main event was not eventful, I rolled around in the mud and thinking back, didn’t ride very well. I knew that I had gained big points in the World Supercross category (remember there were two different series points back then) and that was the goal. Jeff Gibson DNF’d the main event and I knew that as I saw him stranded trackside. With Clark not qualifying, my main concern was finishing the main event and putting myself in a good position for Las Vegas. Both of my rivals were unable to pick up a big points haul and I would now close the gap. Even with a subpar result, I was satisfied with the “big picture” situation as I rode back to the truck. I had put myself into second position for the privateer points chase with only one round to go. All things considered, not a bad night.

This is where the comedy comes in. I called my dad after the race to talk about the night and I was explaining the points, etc. I remember talking about the race and how muddy it was, how close I came to crashing approximately 17 times, and how lucky I was to pick up valuable points on my rivals. I remember the only thing he really said was “I wish you had ridden better, you could have gotten more points.” I remember being so frustrated that he still found the negative on an otherwise positive night but he was probably right. No matter how good or bad things get, dads are there to keep things even keel. I didn’t ride all that well, could have gained more points, and he knew there would be another showdown the following week in Vegas. To be honest, though, I was lucky to even qualify in that swamp.

The following week in Vegas, I was able to again beat both Clark and Gibson and bring home second in the privateer points. That alone was good enough for $15,000 and added to all of the bonuses available in those days. I think my season ending bonus check (points fund and privateer bonus) was just north of $33,000. Looking back, there were many pivotal races in that 2006 season but maybe none more so than Seattle.