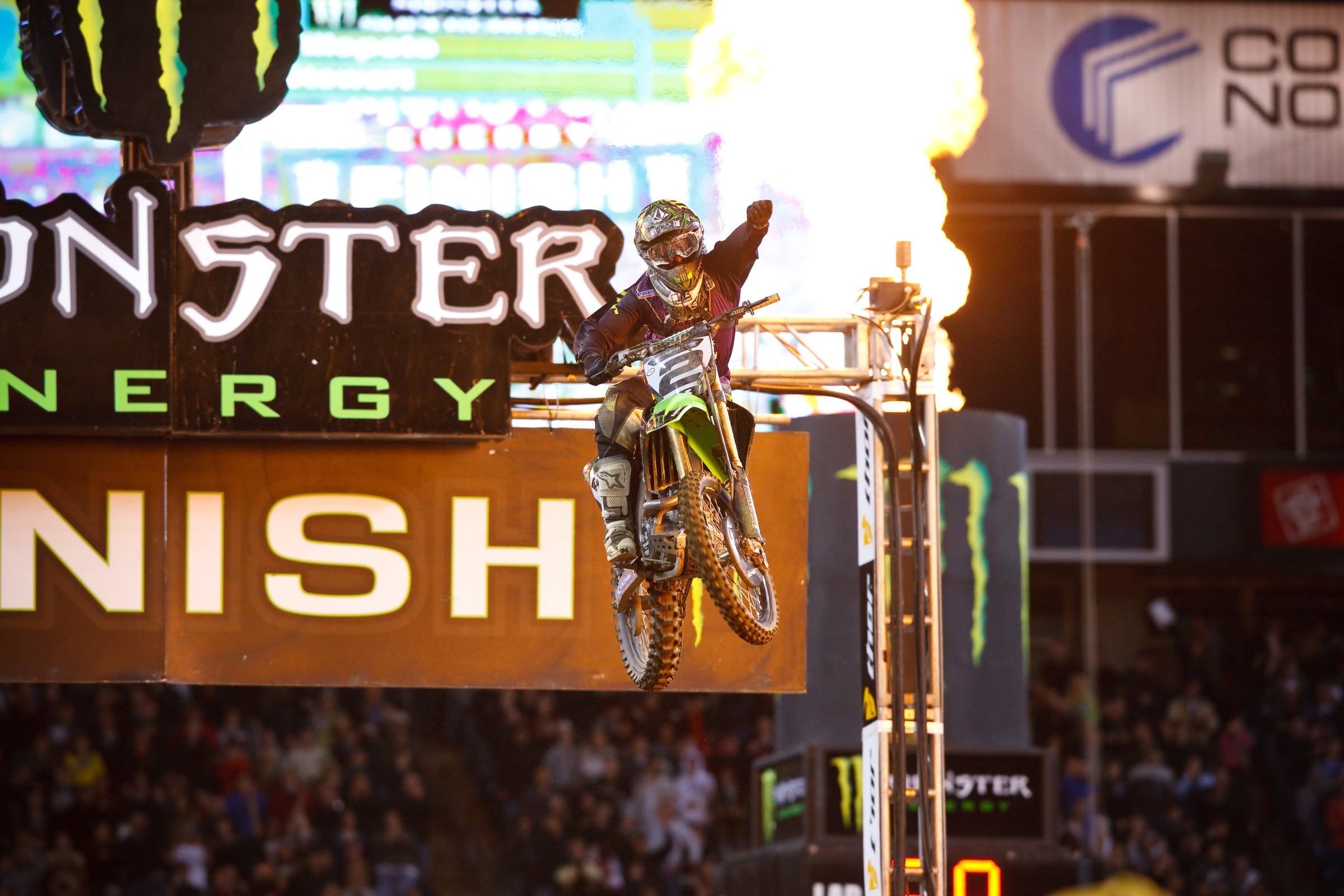 Looking back now, 2009 Seattle Supercross was a big deal for the wrong reasons. The Monster Energy Supercross world was embroiled in the most bitter of James Stewart/Chad Reed feuds, a nail-biting, spell bounding season-long struggle with Stewart’s speed pitted against Reed’s consistency. In a perfect story arc, these long-time rivals now had added heat since Stewart had moved to the San Manuel Yamaha team Reed had won the AMA Supercross Championship with the previous year. Reed took his #1 plate to Rockstar/Makita Suzuki. Thus, what was already set at 10 went to 11. Then they crashed into each other at the season opener. Twelve?

In that race, Reed went down in the first turn, setting up his only non-podium finish of the season. It would cost him the points lead. Stewart didn’t get a good start either, and on Seattle’s typically-tricky soil (extra sandy on this night, in hopes of absorbing the predicted rain that never came) even Crazy Balls Stew had to be careful in a few spots.

Stew/Reed was great theater always, but for the Seattle fans, the race at the front had an even better script. Mike Alessi led early with Ryan Villopoto right behind. Here it was. Villopoto, a Washington native, had the home fans pumped, and to those fans on hand, there was something poetic about Ryan chasing Mike. Any Villopoto fan was well-versed on the Villopoto/Alessi amateur rivalry, one of the most talked about ever, but also one that routinely went Alessi’s way. Surely many of those fans in the stands remember thinking how many races Villopoto could win if he could just solve this Alessi character.

By 2009, though, they knew it would happen. Villopoto had become one of the most decorated small-bore racers in history, hanging three-straight AMA Motocross Lites Championships on the board, as well as some hero rides for Team USA at Motocross of Nations. He was the hot rookie for the 2009 450 campaign in supercross, so hot that Monster Energy Kawasaki didn’t blink over losing Stewart. RV was their future. Heck, he would turn out to be everyone’s future. It’s just that no one knew it yet.

The ’09 rookie season was not good for Villopoto. He had some podiums but never appeared as a real speed threat to Stewart or Reed. After a rough ninth-place finish at New Orleans, he called time out. He was battling an illness and needed time to recover, and he would not return until the home race in Seattle, over a month later. By then, some things had changed. Villopoto had parted with trainer Randy Lawrence, who he had worked with during that fantastic 250 run. His usual mechanic, Johnny “Throttle” Mitcheff was absent in Seattle, attending his father’s funeral. For the night, Villopoto would be teamed with Mike Williamson. This night  was sign of things to come in so many ways.

Then he started behind Alessi and kept the pressure on until Alessi crashed in a rutted corner. The crowd exploded as Villopoto took the lead. This was only eight laps into a 20-lap race, though, leaving plenty of time for another classic Stewart or Reed charge. Only, on this night, that didn’t happen. Stewart blasted past one rider after another and eventually got into second, but he, in a rare moment for a man who advertised his style as checkers or wreckers, decided to bring it home safe in second rather than risk it all trying to cut into Villopoto’s huge lead. Plus, Reed was way back (seventh), so Stewart had done his job in the points. As the white flag came out, the Seattle faithful realized what was going to happen. Ryan Villopoto was going to win his first 450 race, and on home soil, no less.

That was cool for the locals. On the global scale, Stewart had taken the points lead from Reed. They would have some more heated battles, but Stewart never gave those points back and went on to take the championship.

The Villopoto win would loom large, though. Two weeks after Seattle, in the Las Vegas finale, Reed and Stewart were worried only about each other, and points. Villopoto, now emblazoned with confidence, went straight after Stewart for the lead, passed him and took off. He won again. A year later, Ryan Dungey would join him in the 450 class, Reed and Stewart had injury troubles, and the Ryans would begin the longest-sustained two-man run in the history of supercross. Reed and Stewart certainly had more heat, but the Ryans won eight-straight championships.

It all started on a surprising night, with a breakthrough win, against an old rival, at home.