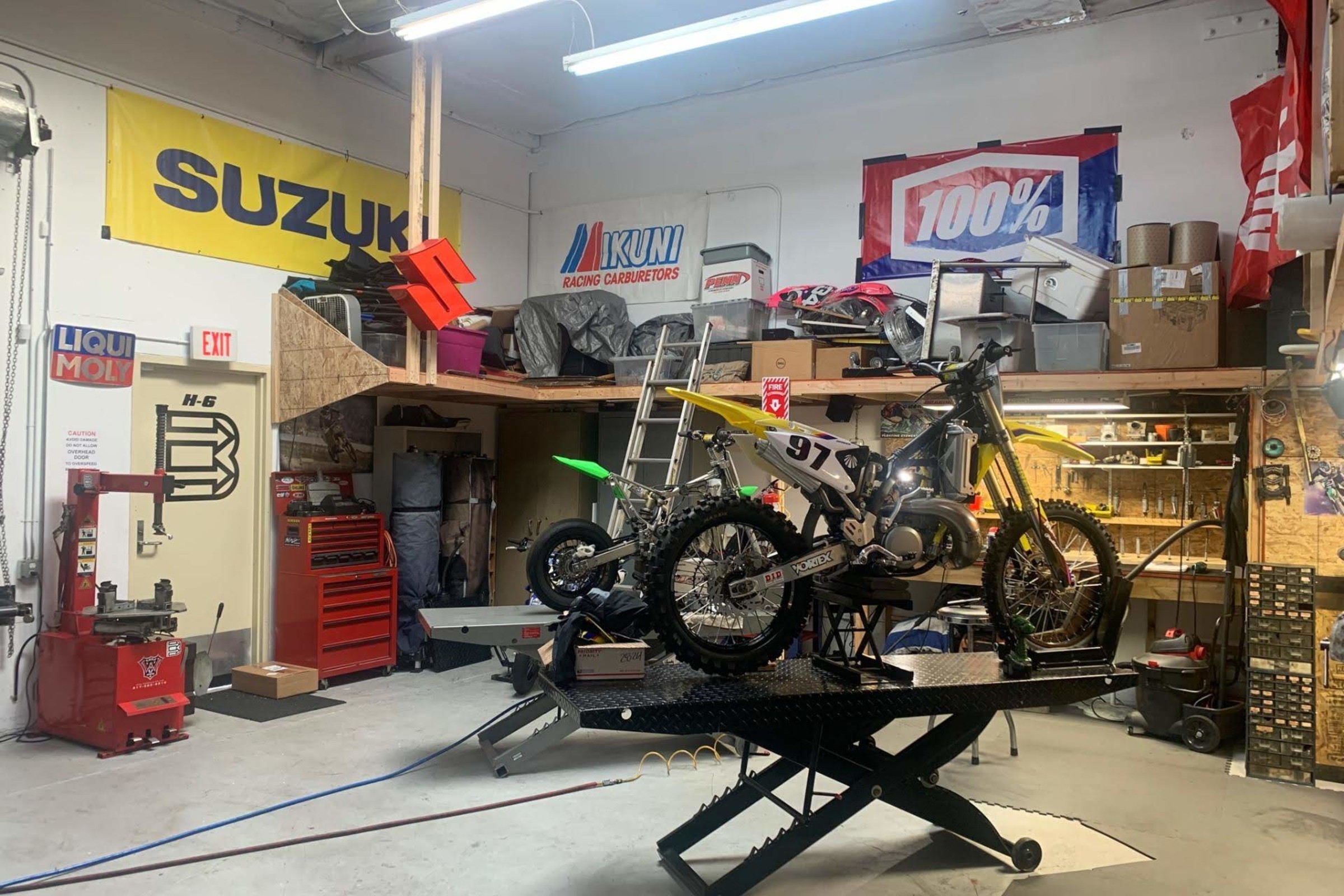 Times have never been better. That’s something we haven’t been hearing much lately, and you probably think that opening sentence was written with sarcastic intent. You’d be wrong, although it really only applies to a narrow segment. Fortunately, that narrow segment happens to be the motorcycling community.

With shelter in place orders being issued across the globe entire cities are all but dormant with citizens hunkered at home looking for things to keep them busy and stave off cabin fever. In our sport, this has resulted in a slew of enthusiasts finally starting work on a long-awaited project bike, getting the old bike in the shed running again, or simply sharpening the dulled edges on their moto weapon. The time spent in the garage has sent positive waves, with dealers, aftermarket companies, and repair shops paddling out to catch it.

Over on the other side of the country, in Pennsylvania, the legendary Jeff Cernic says business has been quite strong as of late.

“Yes, sir,” said Cernic to our Jason Weigandt. “It’s doing very well. Amazon, eBay and our website are all up in sales.”

Cernic runs the MXtire.com website (these are the same folks that are on hand changing tires at all the big amateur races), but the site does more than just sell tires. It’s packed with parts, as are his eBay and Amazon stores. A few weeks ago, he suddenly noticed a spike in sales.

David Vuillemin is one of those people helping to fuel the uptick (Namura Technologies for example, told us they’re selling more pistons than ever) in activity some businesses are seeing. The Cobra recently picked up a 1999 Honda CR250, which he dubbed #DVCoronaProject on Twitter.

“I've always loved working on dirt bikes,” Vuillemin says. “In the nine seasons I raced here in the U.S., I only had a practice-bike mechanic during my last season at factory Suzuki because the team made me get one. I've always worked on bikes and I really enjoy it. Plus, with this virus, it's a good time to start doing stuff you don’t have time to do on normal days. My closet is organized and there are only so many Netflix shows I can watch before I become insane so I decided to pick up a CR250. It might well be one of the worst bikes Honda ever produced but who cares about how good the bike is? I won't race it in Anaheim in 2021. It's a build project, not a riding project.”

As far as inspiration goes, Vuillemin’s got several sources for this project, and plenty of time to decide on a final destination.

“It's my idol's [Damon Bradshaw] last bike and in ‘99 I could've raced for American Honda. After winning a few West Coast rounds in ‘98 on a privateer YZ125, American Honda made me an offer to race for them for ‘99. I went to the HQ in Torrance and met with Wes McCoy [Honda Racing boss], Cliff White [team manager] and Mike Hooker [125 engine guy] with my parents. I was 20. Imagine how bad my English was back then. My parents didn't even speak English. I was the rider, agent, and translator in that meeting. I was very nervous to say the least. We decided to stay an extra season in Europe to race the 250GPs. So, this build could be a ‘what could've been’ build if we decided to sign with Honda. I still have to decide which way to go with this build but so far, I'm thinking about doing a Manchester Honda Bradshaw build. The goal is to take a twenty-year-old-plus bike and build a showroom piece like I did with my previous two builds, [which were Yamahas]. I rode the YZ250 a couple times but that's really not the fun part of a build. I'm 42, out of shape and very slow now. The fun part is to be alone in my garage with Alexa playing music while I go through every single part of a dirt bike.”

Project ✌???? is done and only missing some stickers... pic.twitter.com/8WcB05Mqvf

It’s this type of passion and love for dirt bikes, coupled with the unscripted intermission we’re currently in, that’s creating in a silver lining within the industry.

“I’ve been working with the owner of L.A. Sleeve for 40 years, and they said since basically the seventh of March, their phones haven’t stopped,” Boyko said. “They do the same thing I do. People are hunkered down in their houses wherever they are. I’m shipping out cranks all over the place. Joe Blow is hunkered down in his house and he’s never split cases in his life. Now he’s doing it and sending it all to me. I handle all the other shops in town on top of that. From mom-and-pop shops to big, multi-line dealerships, I do all their stuff. I got more cranks last week, in a single week, than I’ve ever gotten.  If you saw the amount of work I’ve got right here you’d think it’d take ten guys, but it’s just me. This is without a doubt one of the busiest periods I’ve ever seen in my life.”

As far as what people are working on, it’s all over the place, from vintage machines to street bikes, but Boyko says what he’s seeing most are two-stroke motocross engines.

“It seems, right now, it’s all families with kids who own two-stroke motocross bikes,” Boyko says. “They’re going riding right now. Dirt bike riding is the best form of social distancing you can get. FMF shut the doors and Big D has been going out riding with Danny Laporte every day. There’s some vintage stuff too. From New York, I just got two 1986 Hondas for cylinder repair, bore jobs, port jobs, head mods, crankshaft repair, and I’m doing the carbs as well. And the guy is on me, he can’t wait! He’s bored stiff out in the country and he just wants to ride his bikes."

While it’s a fact that we’re living in an undesirable time, it doesn’t mean we can’t make a tiny bit of lemonade from these imposed lemons. Whether it’s basic maintenance, a total rebuild, or a project, there’s never been a better time to disappear into the sacred solitude of the garage. Or if you’ve got kids, sprinkle in some technical education into the homeschool curriculum. I showed my kids how to clean the carburetor and replace a few items on their TT-R50 over the weekend and we all had a blast. With the kids around, it may have taken four times longer than normal, but that wasn’t really the point. We had fun, some money went back into the motorcycle industry, and when this whole mess is over their little machine will be ready to rip. If you’ve got an opportunity to pick up a wrench, seize the opportunity. You’ll be glad you did.