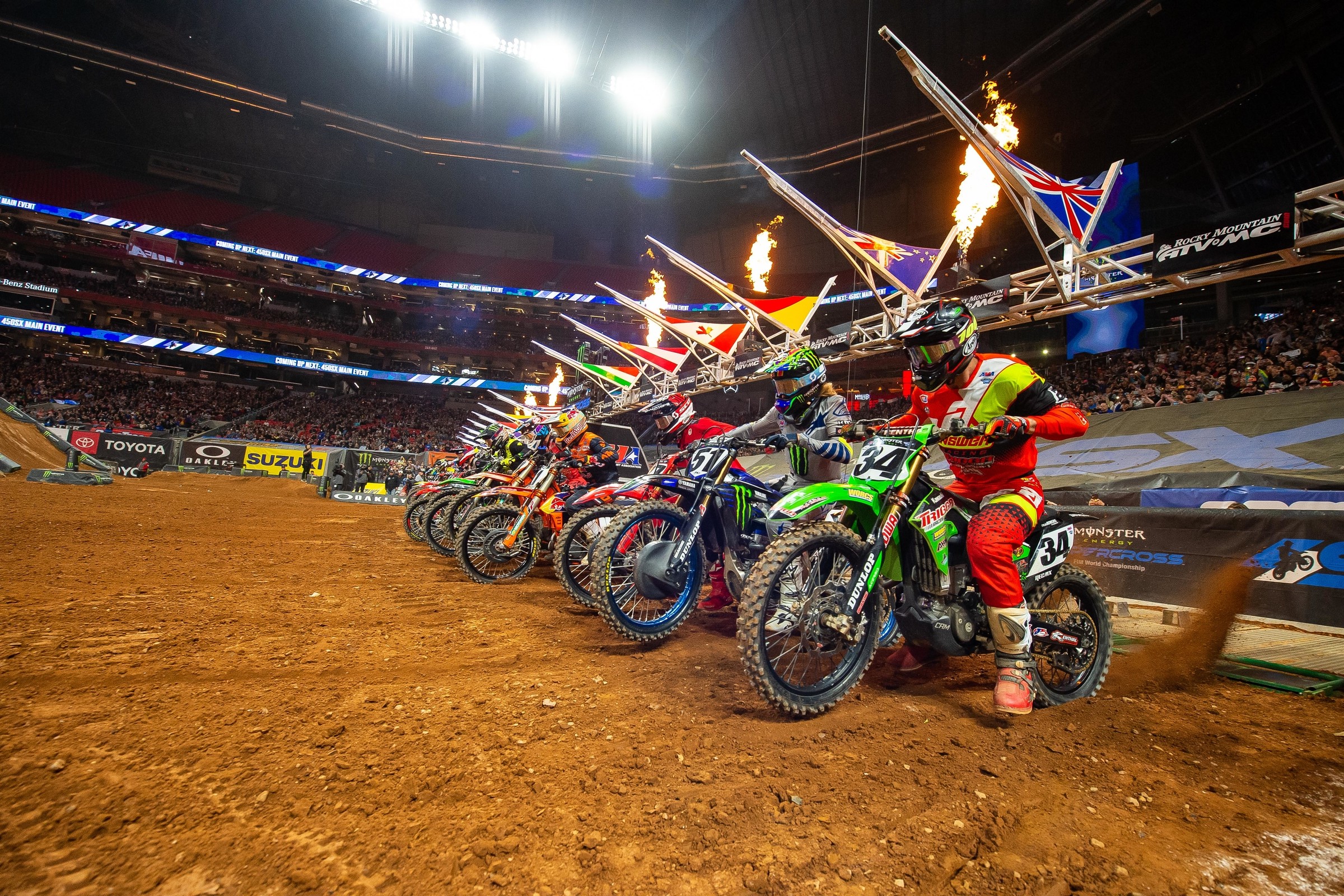 Round 10 takes us to south to sunny Daytona Beach, Florida! The most unique round of the series comes just past the halfway point and do we ever have a series on our hands. The red plate has been cut in half (not really) and will be shared by both Eli Tomac and Ken Roczen. This race has always been viewed as a “man’s race” but it’s also changed over the last 15 years or so. The move to the night schedule shortened the track as well as becoming more “supercross” than the Daytona of yesteryear. Still, it’s the most physically demanding race of the series. This 50th anniversary edition could prove to add even more difficulty. The throwback design looks much more open, increasing speeds but I also expect to see many of the oddball man-made whoops and bumps that once defined Daytona.

The start this year is interesting to say the least. The short chute barrels into a 180 left that keeps on going left. It eventually completes an entire circle, firing back past the initial left. There is a set of whoops immediately following that initial left which could be an interesting dynamic with riders still bunched up. After the first set of whoops, there is a wall jump and another set of whoops immediately following. Watch for riders with a bad start to search the edges of the track to make quick moves through these whoops. If a rider like Eli Tomac found himself mired in 12thcoming around that circle turn, he could drop the hammer along the Tuff Blox and try to make up those lost positions. With a very long first section after the start, including the finish line jump and another grass straight, riders will be jockeying hard to make moves before getting into the upcoming sand.

Speaking of that sand, we know how treacherous it can be at Daytona. Following a pack of riders into the sand on the first lap is a figurative roll of the dice. The left-hand corner and following right-hand corner will be difficult to see as riders are blasted by sand roost. There are always tip-overs here on the first lap and I expect Saturday to be no different.

The next left-hand corner will begin as grass and form black sand ruts by race time. Executing the corner cleanly will be critical for the 250’s as there is a big triple coming right out of the exit. Upon landing, riders will accelerate hard towards a long set of whoops. These whoops will separate the men from the boys because the run-up forces a difficult dynamic. Every rider’s instinct is to check up and enter whoops with a level of caution. Disregarding that caution and shifting up can pay big dividends, though. The speed difference in the field will be very high in these whoops. Malcolm Stewart, for example, will be looking to make up big time in a section like this. It will also be a very viable passing zone as long as it doesn’t become one-lined (one rut becoming very easy to ride through).

A single jump just past the whoops will launch riders into a 180 left at the far end of Daytona’s course. Riders will face the same single jump on exit of the 180, followed by five single jumps. Look for riders to either go 3-2 or 2-3, depending on the angles and height of the jumps. Tripling in would definitely be faster as it allows for more entry speed but if the jumps aren’t built in a fashion to allow it, riders will resort to the 2-3.

A short grass switchback (will turn to black sand ruts) sets riders up for a short rhythm section. There is a long run-up to this section so I am expecting riders to go big here. The obvious choice is either step on-step off then single out or step over the tabletop and double out. With such a long run-up, though, riders might try to quad or even consider jumping the entire section in one leap. If the initial single is not super steep, all options will be on the table.

Up next is a rise that will slow riders down, accelerating hard down the backside. This could also be an opportunity for riders to “send it,” jumping far and high in lieu of braking hard up the face. James Stewart’s skyshot of 2014 comes to mind but again, it all depends on the angles of the take-off etc.

Riders will then fire into a hard left and then climb up and off camber right-hand corner. Riders will be forced to choose between a very slow, precarious inside rut or dropping into the bottom of the corner and rocketing back out. Dropping back into the base of the track, there is a small double and quick bend to the left. That feeds back into the first corner section and around for lap two we go.

This is easily the fastest Daytona track layout in years. Watch for track builders to add randomly shaped bumps and holes to try to slow the track down, even if they don’t appear on the track map. If they don’t this track will be incredibly fast and easy. I also expect to see a few changes after Friday’s press day ride. Rider feedback always helps to improve the racetrack throughout the weekend and on a track that takes the liberties that Daytona does, it’s even more important to keep flexibility.

Atlanta was not a good fantasy weekend for me. Let’s just start there and move past it. I am still bitter and it physically pains me to even talk through the Atlanta results. Woosah.

Okay, the big points paying riders in the 250SX Class included the likes of Enzo Lopes (the only good pick I had), Nick Gaines, Kevin Moranz, Grant Harlan, and Hunter Sayles. The most important of those were surely Lopes and Gaines with 34 percent and 46.9 percent pick trends, respectively. The most painful picks had to be Pierce Brown, Lorenzo Locurcio, and John Short. For Brown, he looked to be on his way to a great debut, qualifying fourth overall and then posting a solid third in his heat race. Everything was looking solid for the Troy Lee Designs/Red Bull KTM rider until he crashed and subsequently threw up a dreadful 17th in the main event. Both Short and Locurcio failed to qualify, picking themselves up off of the red Georgia clay when it mattered most.

In the 450SX Class, Martin Davalos was the story. I picked him in Arlington the weekend before. Big mistake. He couldn’t make it more than a lap or two without flipping himself across AT&T Stadium. Right on cue, I couldn’t pick him in Atlanta and he posts his best finish of his 450SX career. His fifth-place finish was agonizing for me to watch, knowing the punishment he put me through in Arlington, followed by the 52 points he was handing to his Atlanta team owners. Did I mention how much I hate fantasy moto?

For Daytona, I will be looking to capitalize on those that had tough times in Atlanta. Locurcio will be on my team and for anyone that can pick Short or Brown, just know that I will be cheering against you. Watch for the return of the arenacross crew after their last round, including Darian Sanayei, Jace Owen, and Kyle Peters. The tough calls will be on riders like Nick Gaines. He had a horrific Arlington but then put in a top-ten ride for Atlanta. That leaves his handicap with residual value but it’s not quite the gold mine it was a week ago. Daytona is the most unique race of the year so watch for a different group of riders to fill the last few main event gates.

In the 450SX Class, I expect Blake Baggett to have the highest pick trend. With his string of bad luck, his +3 handicap jumps off the page. For those who can’t pick him (me), it’s going to be a torturous main event. Another interesting option arrives in the form of Ryan Sipes. At a +10 handicap, my only real question is his fitness level for 21 minutes of Daytona brutality. I think he makes the main event but if anything goes wrong, I see it being very easy for him to save himself for another Bike Week event (he will race the American Flat Track race next Saturday—listen to the Daytona Preview episode of the Racer X Podcast). A few other notable options are Dean Wilson (+1), Alex Ray (+13), Aaron Plessinger (+0), as well as former winners Justin Brayton (+2) and Chad Reed (+8).

Scientists cancel a years-long case study as Tomac finally proved that he can indeed produce an emotional response.

Justin Barcia formally requests a specific date range to answer the question “Have you ever passed anyone without hitting them?”

Chad Reed celebrates alongside the Daytona Supercross itself, both commemorating their 50th year.

Monster Energy/Star Racing Yamaha holds open tests with their race bike for any and all media.

Mike Alessi sets up a Bowflex in the Daytona pits, hammering out exercises and tantalizing teams needing a fill in rider.