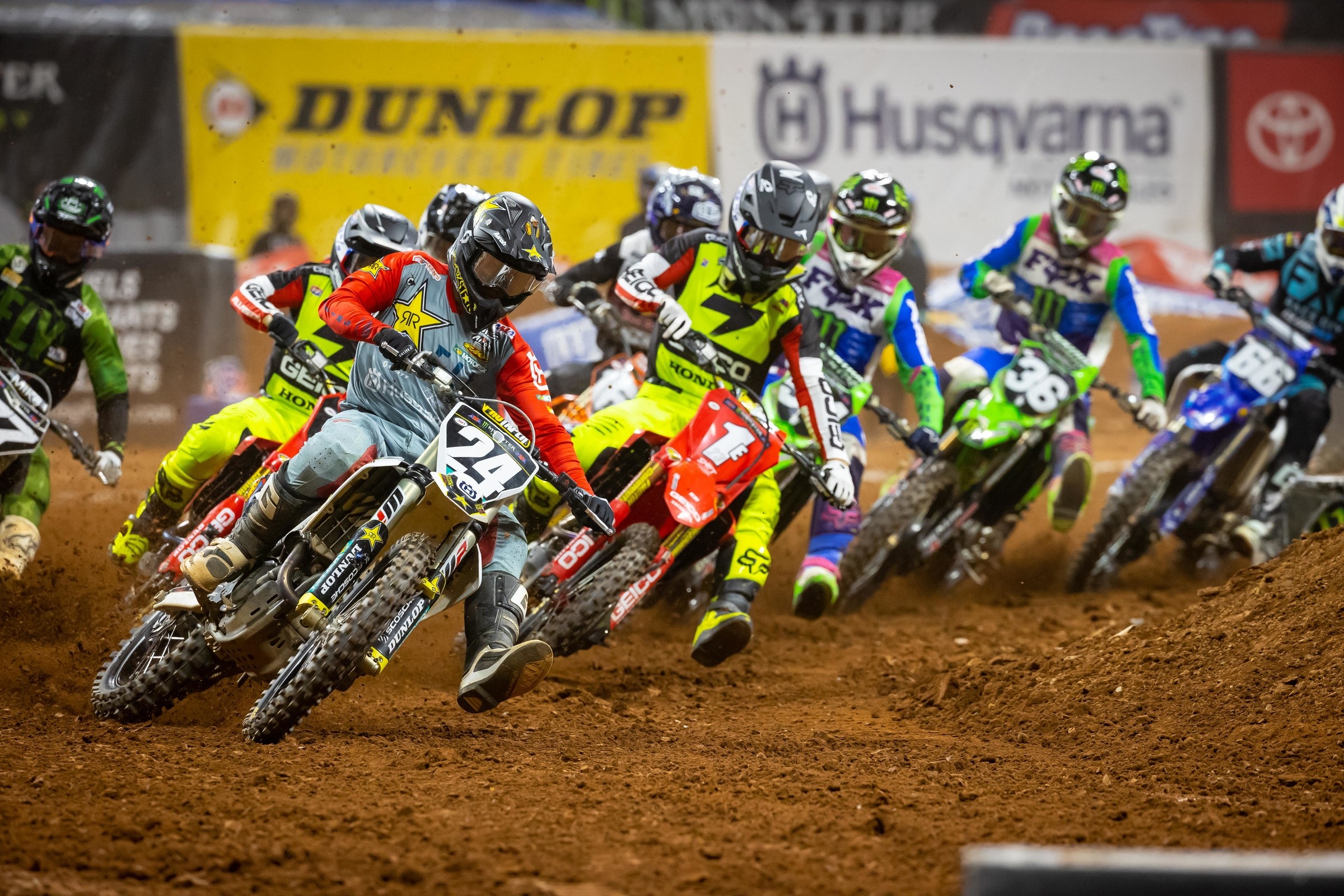 Let’s change the championship conversation for just a moment in Monster Energy AMA Supercross an FIM World Championship, because Ken Roczen just made a statement via a dominant performance at round nine of the season at Mercedes-Benz Stadium in Atlanta. Kenny crushed it, and when you combine that with a tough night for Eli Tomac (early crash, late rally back to fourth) the Honda man has changed the narrative both figuratively and scientifically. Kenny grabbed momentum and also erased his points deficit, and now he and Tomac are tied at the top of the standings heading to Daytona.

“That was the goal for me, we had to do something because obviously with him [Tomac] clicking off wins…I have to win, there’s no way around it,” said Roczen, who led from start to finish. “Getting good starts is definitely key. So we had to get up front. Obviously we want to win any weekend. I wasn’t stressing anything because it was only seven points [gap to Tomac entering the race] but we didn’t want that gap to get any bigger.

“I think it [the red plate] looks good on my bike—obviously it looks good to have it on any bike but I really like the all red,” Roczen added. “This win was super important to us. I’m glad we pulled it off. And the wins are super fun and they get addicting. It was just our night. I gelled really well with the bike. I had no complaints there and didn’t change anything. The season is still long, but the last few rounds have been tough. I just wasn’t myself. We minimized the damage on those days, but tonight, we won and this is awesome.”

Roczen made the race for the win all but over immediately. Behind him? Pure chaos! This Atlanta track didn’t lend itself to good racing, with most of the events taking on a follow-the-leader feel. It changed late in the 450 main, as the track broke down and got tricky, and the championship pressure launch the few riders still mathematically in the hunt—Tomac, Cooper Webb and Justin Barcia—on late-race charges. For most of the race, Martin Davalos ran second, a superb performance for the 33-year-old rookie who has hit the ground far too many times this season. Tonight, he was rock solid the whole way. Barcia was mid-pack after a bad start, Webb was struggling big due to injuries suffered in a huge crash last week, and Tomac was at one point 15th after crashing. Barcia kept digging and passed Davalos late for second.

“The last four weekends I’ve started in the back, I wanted to get to the podium but I was too far back to do it,” said Barcia after taking his first podium since round two in St. Louis. “Tonight I knew where everyone was and all the guys in front of me, I knew I could kind of catch them. I was able to get to second with about five laps to go. It was good, there was some aggressive racing out there. Kept it interesting.”

Barcia has struggled with starts all year, but hard efforts to salvage good finishes has kept him in the title chase, third in the series, 23 points behind Roczen and Tomac, and one point up on Webb. Better starts would help him.

“Last year the power in my bike was really strong so I had to kind of change my riding style [on starts] a little bit to kind of manhandle it,” said Barcia. “No I have a really happy setting on the bike with my engine, but I’m working to get back in my comfort zone. I’ve been practicing a lot and getting better each weekend. Maybe you don’t see it. Tonight I had a pretty good jump, but Mookie got me by like an inch and I had to shut off. He’s a pretty big guy. I’ve definitely had the speed all year. I’ve been super consistent, A2 was a difficult race for me but [otherwise] I’ve been plugging along kind of silently keeping the points where they’ve been at. I told Ricky on press day that it’s time to do it or not. I definitely need to win, that’s what it’s going to take to get this championship.”

Davalos held his ground in third until the final lap, when Webb (ailing) and Tomac (on a comeback) caught him. Davalos made the right moves covering the insides, but Webb still managed to sneak it in there and make a last-lap block pass for the podium. Tomac also took advantage and snuck by Davalos to take fourth.

Webb was hurting badly due to the hematoma suffered last weekend. He skipped the post-race press conference to be attended to by medics. He did issue a quote within Red Bull KTM’s post-race statement.

“That was probably the hardest race I’ve ever had,” Webb said. “I was way back and just put my head down and tried to do the best I can. I got a few gifts from the guys ahead of me but man, it was painful. I knew it wasn’t going to be fun or easy, but that’s racing. It’s a long way out but the only thing keeping me going is this championship, so we’ll do whatever we can.”

Tomac was right behind Webb on the last lap but couldn’t figure out a way to pass him while they also battled Davalos. The Monster Energy Kawasaki rider was down early due to an ill-advised block pass attempt on Blake Baggett that left them both on the ground. Tomac was 15th, then up to 13th before stalling and going back to 15th. From there, he stalked his way back to the front for fourth.

Davalos was bummed to have lost a podium on the very last lap, but it was still a breakthrough ride with fifth.

“I’ve learned not to look back,” said Davalos about managing the early stages of the race. “So I just tried to look at Kenny. I wanted to stay within a little bit of him, obviously he kind of gapped me. I had some pressure from some Honda guys [Hill and Friese], but I felt they weren’t coming at me and showing me a wheel. I told myself to stay calm and stay strong and maintain my pace. The track was difficult.”

Unfortunately for Davalos, a determined Webb and Tomac are the last things you want to see on the last lap.

“I did it right, but Cooper has done that to a lot of people,” said Davalos of the last-lap pass. “I protected my line but he still got me with his cleverness. At the end of the day I’m bummed, I’m disappointed, to get a 450 podium would have been huge for my career. But I’m still walking out of here stoked. Team Tedder, they’ve worked hard and they believe in me. Everyone wished I would have podiumed, but going from 15th, 11th, 14th, to fifth, that’s great for us.”

Barcia, by the way, made his feelings known on some aggressive racing with Tomac, who hit him in the early laps.

“I don’t really like it,” said Barcia. “I made a good clean pass on Eli. If someone hits me so hard it physically hurts me, I’m not happy with it. I thought the pass he put on me was stupid and then he tried to put a pass on Baggett and cleaned him out. I think he ran it harder than he should, and I know because I’ve done that before!”

Justin Hill logged another solid race on his SmarTop/Bullfrog Spas/MotoConcepts Honda, but a few mistakes while inside a hellacious battle left him sixth on a night where he was in contention to podium. At one point Hill, Jason Anderson and Vince Friese all slowed each other up, which allowed Webb and Tomac to pass them. Aaron Plessinger was eighth on his Monster Energy Yamaha, then came Hill’s teammates Malcolm Stewart and Vince Friese, and Dean Wilson, who went down while battling Anderson and Hill. Anderson was 11th.

Honda got to celebrate double victories in Atlanta, as Chase Sexton made a statement of his own winning the 250 class. He was second behind RJ Hampshire early, then briefly fell behind Shane McElrath. He passed McElrath right back and eventually worked Hampshire over—passing two key title rivals to win.

“I feel like for the whole night show, it [the track] was pretty dry,” said Sexton. “They put a good amount of water down, but not enough. It was definitely tough to get that rhythm section after the start on my bike. I managed to do it every lap, but it was definitely hard, I think that was make or break. There was one turn with ruts in it and everything else was dry and marbled. It was about being patient. I wasn’t really a fan of Atlanta, this was my first pro race and I broke my leg. So I just wanted to get through it and be safe—it was good to get a win.”

Hampshire led a good portion of the race on his Rockstar Energy Drink Husqvarna, but mistakes in a few rhythm lanes allowed Sexton to ultimately make the pass. He was still happy with his improvements from round one.

“At round one we weren’t where we wanted to be,” said Hampshire. “For me, everything is new [with the bike and team], and it’s a lot of learning. Not taking anything away from these guys, but I felt, almost like myself [tonight]. Just a few mistakes and if I hadn’t made them, maybe I would have won the race.”

McElrath was disappointed to have Sexton pass him back, and then he wasn’t able to get Hampshire.

“For bike setup today I think that’s where we struggled the most,” said McElrath. “We would make a change for one section of the track but then we would have problem where we didn’t have before.” McElrath also said the track—which was slippery in some spots but tacky in a few others, made it tough not only to set up the bike, but also tough to know how far to push.

Jordon Smith rode hard on his Monster Energy/Pro Circuit Kawasaki, but he was quite a distance from the lead trio. He spent a lot of his race battling his teammate Garrett Marchbanks, but Marchbanks later crashed and then fell off the pace to end up seventh. This opened the door for rookie GEICO Honda rider Jo Shimoda, who rode very well for fifth. Enzo Lopes logged another good ride with sixth. Jeremy Martin was in the hunt with the lead group but Hampshire made a mistake, kicked a tough block onto the track, and Martin hit it and crashed hard. He got back up but finished a disappointing 19th.