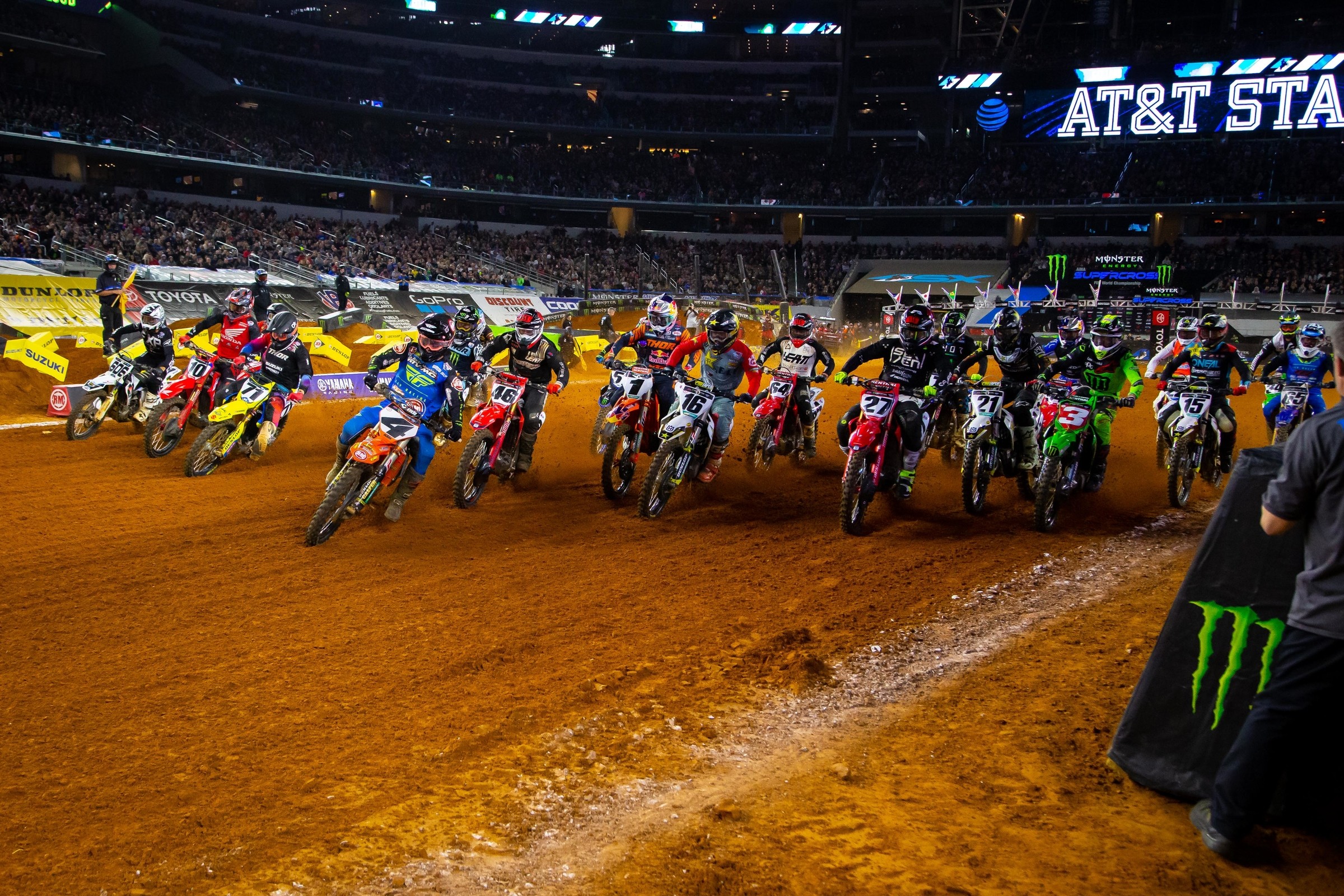 Overall, we’ve witnessed a fantastic start to the 2020 season of Monster Energy AMA Supercross an FIM World Championship, but bad news finally bit back during this evening’s event at AT&T Stadium in Arlington, Texas. The good health and deep field that had headlined most of the year’s races went by the wayside on a tough track run within the chaotic Triple Crown format. Rookie sensation Adam Cianciarulo went down hard in practice, breaking his collarbone, and the normally-ultra-consistent Cooper Webb took a painful hit in the same section of the track during the night show. Webb posted that he had escaped with “hematoma with deep bone bruising to my pelvis as well as my sacrum,” which sounds painful but is no doubt better than it could have been considering he went flying back-first onto concrete.

So, the podium finishes in the 450SX class were no less significant than usual, but they were perhaps a little subdued on a night when most riders were happy to survive. There was something to the overall combination of a tough, broken down track, the razor’s edge intensity of the Triple Crown, and maybe just some bad luck that defined the racing. The battle for the win was still good, though, with Rockstar Energy Husqvarna’s Jason Anderson actually in position to take his first win since 2018 until the late stages of the night, when Monster Energy Kawasaki’s Eli Tomac powered to the top to notch the overall with 5-1-1 scores. The last main, to decide it all, was superb, with Anderson, Tomac, Ken Roczen and Zach Osborne tussling for the victory.

“On paper I like the Triple Crowns, but I actually don’t like them,” said Tomac, who now has two race victories in a row and stretches his small points lead a bit over Roczen.

Historically, Tomac has not performed well with the prosperity of the points lead. He was asked about the pressure of the red plate in the post-race press conference.

“It’s just nice to get through this one,” said Tomac. “But, that being said, this year, I just feel like I’m in a better place. Where before, I felt almost like I was a little nervous in that situation, and that led to goofy mistakes. Overall, on the night, these Triple Crowns are really tough. After the first one, it’s like “Man! Fifth place?” And Kenny wins it. It’s tough to go back out there and fight, but we were able to come back and get those wins in two and three.”

Roczen looked great winning the first race—pulling away from an early challenge from Webb, but the second race was tough due to a bad start. He was seventh there. He and Tomac battled hard with Anderson and Zach Osborne in the third race. Tomac passed Anderson for the lead to take over the overall top spot, then Anderson crashed just before the white flag came out, handing second in the race, and overall, to Roczen.

“I just had my struggles all day, in general,” said Roczen. “Wasn’t my favorite type of track, it looked really tacky but it was actually a little slippery. The first race was good, it was good to check out, it was good to start the night with a low number. I think the second race is the most important, and we weren’t able to get that one. All in all, I feel like, with all the crashes out there, and big crashes, I’m really happy how we executed. We fought hard, went back and forth with Eli a couple times. Made some passes, battling in traffic and with people in front of me. So I’m happy with this weekend.”

With Tomac having a bad first race, and Roczen and bad second race, Anderson was in position for the overall in race three. He started second, was passed by Blake Baggett but then got him back to retake the spot. Then he battled past his teammate Osborne to grab the lead. It all looked good, but Tomac was coming. Eli marched through Roczen and Osborne and then got Anderson.

“Once I got out front I knew it was time to just start to flow, but I haven’t led races in a long tie. I was riding a little bit timid,” Anderson said. “All in all, I had a good time. Kind of bummed I had a little bit of a crash there, but it feels so good to just be in the battle with these guys. Last couple of weekends I haven’t done that. It was nice to be up there, toward the end of that race, and feel like you had a shot at the win.”

Justin Barcia suffered a rash of bad starts, which had unfortunately become common for him, but rode his guts out to work his way to fourth overall with 4-5-4 scores. That’s also been a common theme for him. Osborne got some laps led in the last race and went 7-4-3 for fifth.

Cianciarulo’s fast qualifying streak ended at seven, since he crashed out of the first timed session. Justin Hill became the first to knock him off, looking brilliant in qualifying and also showing speed in the night races—but he was coming from behind too often. In the last main, Hill went down on the first lap and battled from last to eighth. He was 6-3-8 for sixth overall. His Bullfrog Spas/SmarTop/MotoConcepts teammate Malcolm Stewart was next, ahead of Monster Energy Yamaha’s Aaron Plessinger, Dean Wilson and Baggett.

With the crashes for Cianciarulo and Webb, several riders mentioned the difficulty of the dragon back that led to their crashes.

“I think it’s just, first, the whoops break down and the dragon’s back [breaks down],” said Roczen. “On press day I saw it. They will have five whoops on the dragon’s back, and the fifth one is the lowest one. I’ve seen it happen multiple times, I don’t know what the thought process is there, you want the last whoop to be the tallest one.”

“I’m with these guys,” said Tomac. “I don’t understand why they build the last one lower than the first four. You want to hit the last one but you have to hit that thing low.”

“Cooper’s day started off well,” said Red Bull KTM Team Manager Ian Harrison. “He was good in both qualifying practices and in the first race he rode exceptionally well, we were happy with him and we didn’t make any bike changes. In the second race, he was riding well and moving through the pack, and then it looks like he lost drive going up the dragon’s back, landed on the front wheel and it flipped him off and he landed in the cement. As of now, it seems like there are no broken bones but we are heading to the hospital now to check in with Cooper.”

Webb later posted on Instagram he had somehow only suffered heavy bruising.

Some times you ride the bull sometimes you get the horns. Just left medical examinations and I got very lucky with hematoma with deep bone bruising to my pelvis as well as my sacrum. Extremely lucky and blessed to only walk away with that. Thanks everyone for the support and prayers. Not quite done yet

Things are fresher in the 250 class, now only into round two of 250SX East. Chase Sexton was able to stop any momentum Shane McElrath gained with a win last week, by taking round two.

“Last year was nice to win the championship, but not the way I wanted it to happen,” said Sexton. “Shane winning that first race [last week in Tampa], where he kind of just checked out, I’m like, “This can’t happen again. I have to stop it.” It was really important tonight to get a good result and to be up here on the top step. First race was chaotic, made the best of it. Second race, I was like, “I’ve got to go out here and win this thing.” I was really happy with my bike, the whoops were good and I feel like that was a strong point.”

Sexton might have won the first race, but after passing RJ Hampshire for the lead, Hampshire took him out in a corner. Hampshire won and Sexton recovered for second. Sexton won the second race and then followed McElrath home to lock up the overall in race three. Hampshire was third overall.

“I think there was a little “I owe you” there,” said Hampshire of his aggressive pass.

“We came in together [last year] outdoors at Millville, and I know he wasn’t happy about it,” said Sexton, in agreement.

McElrath still had the speed, but bad starts in the first two races made it tough. He came back to win the third.

“It was a bummer,” said McElrath, of Monster Energy/Star Racing Yamaha.  “I feel like second place doesn’t show everything we had to go through tonight. That’s part of the Triple Crown, and I was prepared for it, but I just didn’t execute the starts in the first two. I feel good about my riding, but I just didn’t put myself in the best positions.”

“There was still a bunch of struggling going on throughout the day,” said Hampshire. “I’m still learning with this new team and new bike. I feel like each weekend we’re going to get better and better. My fitness and strength is next level right now, I just need to gel with my bike, and I think when I do the results will come with it.”

GEICO Honda’s Jeremy Martin was solid again, going 5-3-4 for fourth overall, and Garrett Marchbanks had a quiet night, but consistently built a top five with 6-4-5 scores. His Monster Energy/Pro Circuit Kawasaki teammate Jordon Smith had a forgettable night marred by crashes, and ended up 13th overall. Josh Hill, Enzo Lopes and Joey Crown took the 5-7 positions, an impressive night for their Club MX Yamaha team. Jalek Swoll bounced back for ninth overall after failing to make the main last week, and fellow rookie Jo Shimoda rounded out the top ten.

In other injury news, Broc Tickle went down and suffered a suspected broken hand or wrist. This was just Broc’s second race back from a two-year suspension, and he’s also the replacement for two injured JGR/Yoshimura Suzuki riders in Joey Savatgy and Fred Noren. That’s how bad the luck is for JGR. Also, Kicker Arenacross points leader Kyle Peters went down in the whoops and looks to have a hand or wrist injury of his own. That could cost him dearly as the AX championship resumes. We saw Peters after the race and he said he’s hoping for the best.