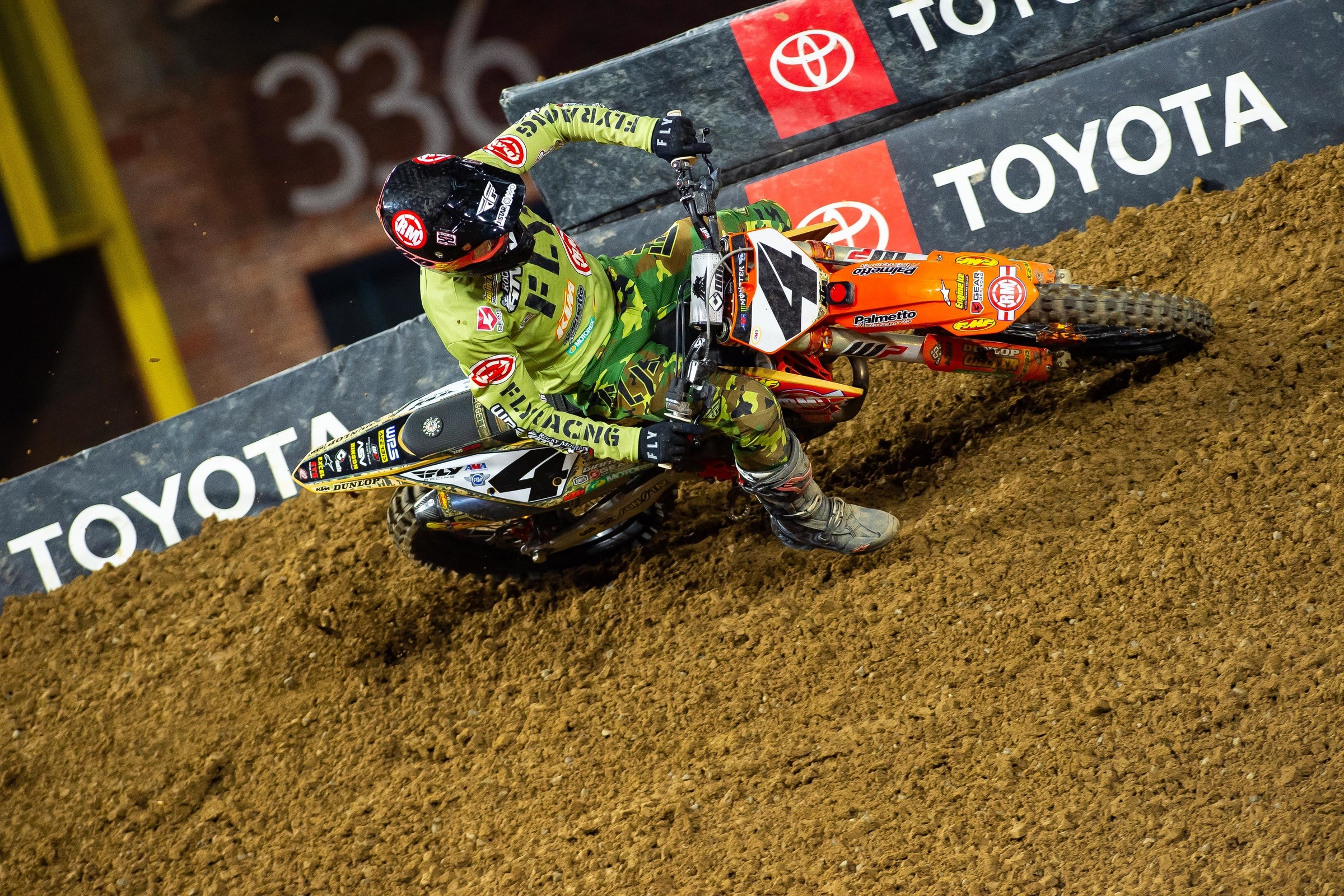 Comment: Anstie is rehabbing after having surgery on his ankle to correct a preexisting problem that flared up. There is no exact timetable on his return.

Blake Baggett – NECK, BACK | IN

Comment: Baggett went down in the heat race in Tampa and was hit by another bike. He sustained whiplash yet still managed to remount and qualify. Although he transferred into the main event, he would sit out due to severe muscle spasms. He’ll be back in action in Arlington.

Comment: Blose is out  due to a concussion, fractured right hip, broken right radius, dislocated wrist, broken left ribs, and a lacerated liver suffered in Glendale. As of now there is no date set for his return.

Comment: A big crash during qualifying in St. Louis resulted in a torn ACL, a torn patella tendon, a broken big toe, and two broken metatarsals for Martin. He’s out for the season.

Comment: Merriam had surgery on his collarbone and plans on getting back to racing in Atlanta.

Comment: Miller will make his return to racing in Arlington after breaking his scapula in Australia.

Comment: Noren is out for the time being after suffering a leg injury in St. Louis. He posted an update on Instagram last night where he captioned a video of the incident and said he had to get two plates and 12 screws in his tibia. He ended the post with "Can’t wait to be back on the bike in April."

Comment: Ray missed the action last week after crashing hard during practice. When asked if he was in for Arlington he told us he was extremely sore, but “my flight is non-refundable so I’m gonna try and ride Saturday. It may not be pretty.”

Comment: Alves is out after having surgery to fix a wrist injury sustained at the Motocross of Nations.

Comment: Brown had a crash in late December that caused an old injury to flare up. He missed Tampa but he’ll be back in Atlanta.

Comment: According to Team Manluk /K&R Racing, Floyd will not compete this weekend after suffering an ankle injury last weekend in Tampa. "It was the teams decision to have him sit out this weekend and get back to 100%," the team posted on Instagram.

Comment: Lawrence tore his labrum and rotator cuff before the season. A return date hasn’t been decided, but he hopes to be able to return near the end of the season.

Comment: Moreau had a terrible crash in practice in Tampa and was taken to the hospital with serious injuries. Read more on Moreau in this post that we will continue to update when more information is made available.

Comment: Nichols is out due to dislocating his shoulder in October. Nichols and the team want to be sure his shoulder is 100 percent before he races again, and an exact return date is yet to be decided.

Comment: Craig missed the Oakland and San Diego Supercrosses after fracturing bones in his hand and finger in Glendale but he’s back to riding. He wasn’t in Tampa last weekend but he did some sand riding of his own!

Comment: Kelley had surgery to repair a broken lower fibular suffered before Anaheim 2.

Comment: After suffering a broken collarbone at Anaheim 2, Lawrence hopes to be back when the 250SX West Region returns to racing in Seattle, Washington.

Comment: During the week leading into San Diego, Oldenburg suffered a partial tear in his ACL and tore his meniscus while practicing. His goal is to recover while the championship goes East and then return when the 250SX West Region resumes to race the last four races before undergoing surgery.