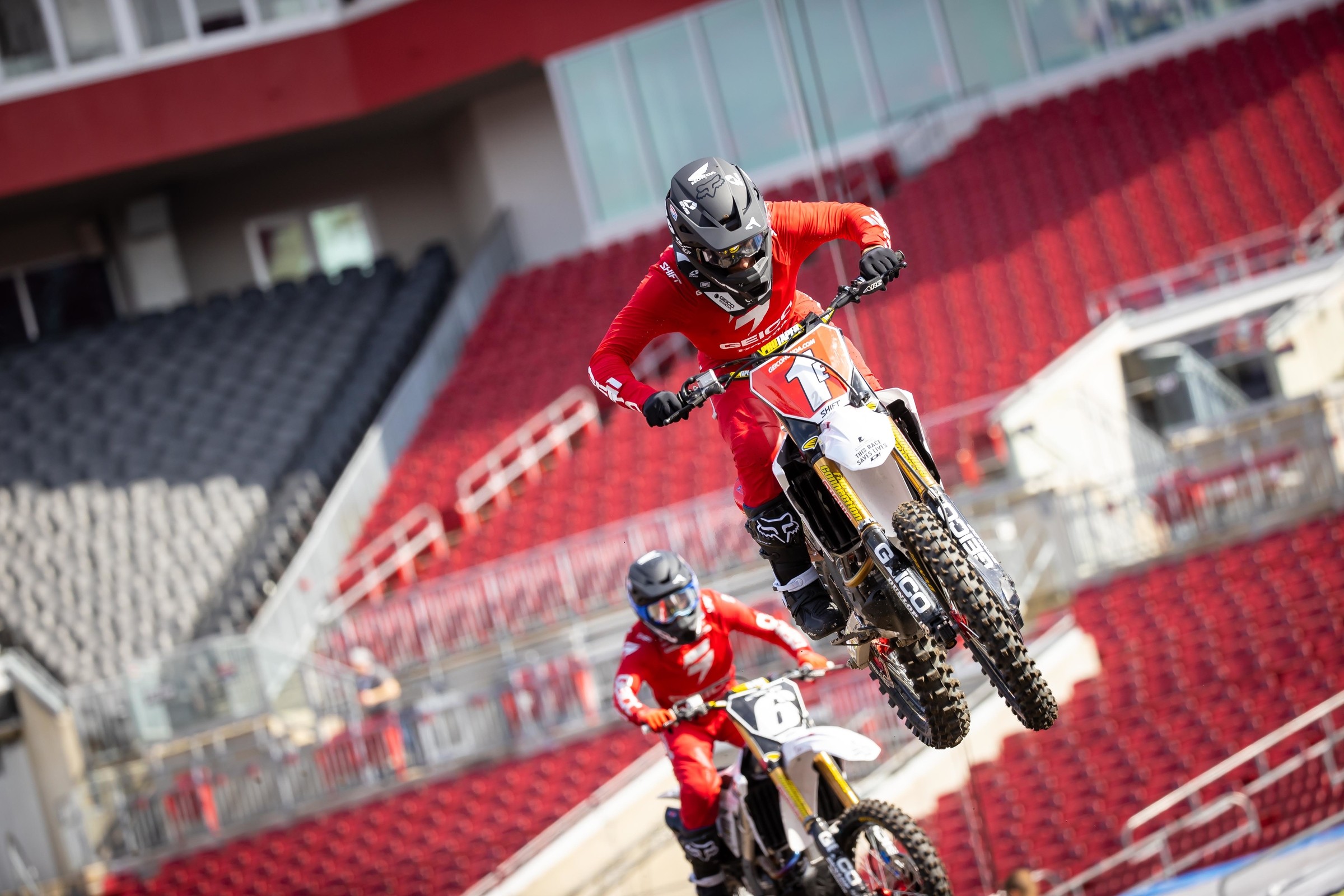 Last week, the hype was all about which one of these riders would win, and who would leave with the points lead as a possible result. Well, neither Eli Tomac nor Ken Roczen even ended up on the podium in San Diego, and if you successfully predicted that then you should probably look into a career betting on sports. The red plate didn’t change hands either, but Roczen’s lead did shrink to just a single point over Tomac. It’s unlikely both these guys won’t be on the box in Tampa, and the points are going to change too. Will it be Roczen or Tomac in the lead after the final lap in Florida? ­–Aaron Hansel

That’s how many laps Adam Cianciarulo has led this season, second only to Roczen, who leads the category with 43 (not including the Triple Crown races). That’s 23 percent of the total (116), which makes it weird to think he hasn’t won a race yet. He’s been close, especially in San Diego, where he led 20 laps before surrendering the lead to Cooper Webb late in the race. You know AC is going to lead more laps this season, and you know that first win is on the way. Will it come in his home state of Florida this weekend? –Hansel

*Laps led stat not inclusive of the Triple Crown format in Glendale, Arizona.

Aaron Plessinger was great in San Diego, running third early before going down and eventually finishing in tenth. No, it’s not his best result of the season—he was ninth in Glendale—but it’s definitely the best he’s looked all year. Afterward he said he and the team spent the week testing, and even changed up their practice venue. The work resulted in a better setup for Plessinger, who said up until that point, he was feeling confused on the bike. We’ll see if the enhanced comfort and feel of Plessinger’s new setup translates into another good ride in Tampa. –Hansel

Blake Baggett has been incredibly fast many times this season, but you’d never know it looking at the results. Thanks to bad starts, tangling with other riders, and just plain bad luck, Baggett’s tremendous pace just hasn’t resulted in him escaping the gravitational pull of mediocrity in the main events. Things were different in San Diego, where Baggett was fast in qualifying and nabbed the final podium spot in the main. He wasn’t far from the lead duo of Webb and Cianciarulo at the end either, and had the two gotten into each other Baggett would have been right there. Baggett’s got the speed to run up front, and if things fall into place in Tampa, he’ll be up front again. –Hansel

The 250SX East Region officially kicks off this weekend, and as usual, there are quite a few storylines to keep track of. We’ll see the SX debut of rookies like GEICO Honda’s Jo Shimoda, Rockstar Energy Husqvarna’s Jalek Swoll, and Troy Lee Designs/Red Bull KTM’s Brian Moreau. Then there are familiar faces in new environments, like Shane McElrath with Monster Energy/Star Racing Yamaha, Jordon Smith with Monster Energy/Pro Circuit Kawasaki, and RJ Hampshire with Rockstar Energy Husqvarna. Jeremy Martin will be back in action, and Josh Hill is even coming out of retirement to race a Yamaha YZ250F. It’s going to be fun seeing how they all start stacking up once the gates start dropping out East. -Hansel

This weekend we’ll get our first glimpse at the rookies Hansel mentioned above. But there’s other riders who will be making their AMA Supercross debuts this weekend. Some riders you might know heading into the weekend, but others might turn your head wondering “Who is that?” come the gate drops Saturday night. Here’s a few other rookies to note: Rock River Yamaha’s Jamison DuClos and Chad Saultz, TiLube Honda Racing’s Grant Harlan, Team Manluk/K&R Racing’s Ryder Floyd, Brock Papi, and Zane Merrett. There’s a handful of riders who recently competed in the 250 Futures class at the 2019 Monster Energy Cup who will be making their AMA Supercross debuts this weekend: Swoll, Harlan, DuClos, Papi, Floyd, Lane, Colton Eigenmann, Ezra Hastings, Maxwell Sanford, and Kobe Heffner are some of the names on the 250SX East entry list. While we got a look at a select few of these riders last summer in the Lucas Oil AMA Pro Motocross Championship, we’ll get to see their first crack at AMA Supercross tomorrow evening. There’s also a total of 64 names on the 250SX East entry list and while not every single rider is guaranteed to make an appearance, there’s still going to be a ton of guys fighting for the night show and the 22 spots in the main event. -Mitch Kendra

Phoenix Racing Honda teammates Kyle Peters and Jace Owen are sitting first and second, respectively, in the 2020 AMA Kicker Arenacross Series. Owen is looking to defend his title but Peters has been putting in strong results each weekend. However, both are set to race this weekend in Tampa. But they’re not the only ones from the tight-track championship planning to race tomorrow. Harlan, Mason Kerr, Cody Vanbuskirk, Kameron Barboa, and Dustin Winter have all been getting Arenacross gate drops under their belt leading into this weekend. We’ll see if the extra race situations provide a positive impact on their respective starts to the championship. -Kendra

No Shortage Of Effort

John Short came up short on making the 450SX main event in San Diego last weekend as he finished fifth in the LCQ but it’s not because a shortage of effort—he was on a Honda CRF250R! Short used the final round of the first West Coast round in order to get a feel for his bike come the 250SX East Region kick-off. Short finished 14th in the 250SX East Region in 2019—with a season best of 12th at the Daytona Supercross—but afterwards he put in a great ride this summer. After finishing 15th in the 450 Class points standings of the Lucas Oil AMA Pro Motocross Championship, the Texas native has been grinding with his new team. Short and Team Manluk/K&R Racing will be ready to go full throttle with the first gate drop on the 250SX East Region Championship tomorrow. -Kendra

The layout and build for the first East Coast race is mostly what we expected: nothing super tough (in terms of whoop size, big size/combination, etc.) but a racy build. Two back-to-back 90-degree, right-hand turns may make the racing one lined but the return of a sand section—with two different jump variations—will also provide riders to test different lines to the unpredictable section. The NFL stadium will provide another long starting straight and two big rhythm sections that span the length of the sidelines. Watch to see who tests big lines throughout the day when looking to cut time off their laps. -Kendra

The wait is finally over for Broc Tickle. He will compete this weekend for the first time since the 2018 Seattle Supercross on April 7, 2018, after serving his suspension for the anti-doping test taken at the 2018 San Diego Supercross. Tickle was putting together his own deal to race a Husqvarna but with the JGRMX team lacking results in the 450SX Class, Tickle and the team got in touch. With Joey Savatgy out with his ankle injury, the team turned to Fredrik Noren, who joined the squad last summer for the Lucas Oil AMA Pro Motocross Championship but then suffered an injury of his own. We were tipped off to Tickle testing with the team at the end of January but now his two-year FIM Suspension officially concluded on Tuesday and he signed a deal with JGRMX/Yoshimura Suzuki Factory Racing on Wednesday. Without having raced in so long it’s tough to say where Tickle will fit into the mix in the but it will be good to see Tickle back in competition. -Kendra