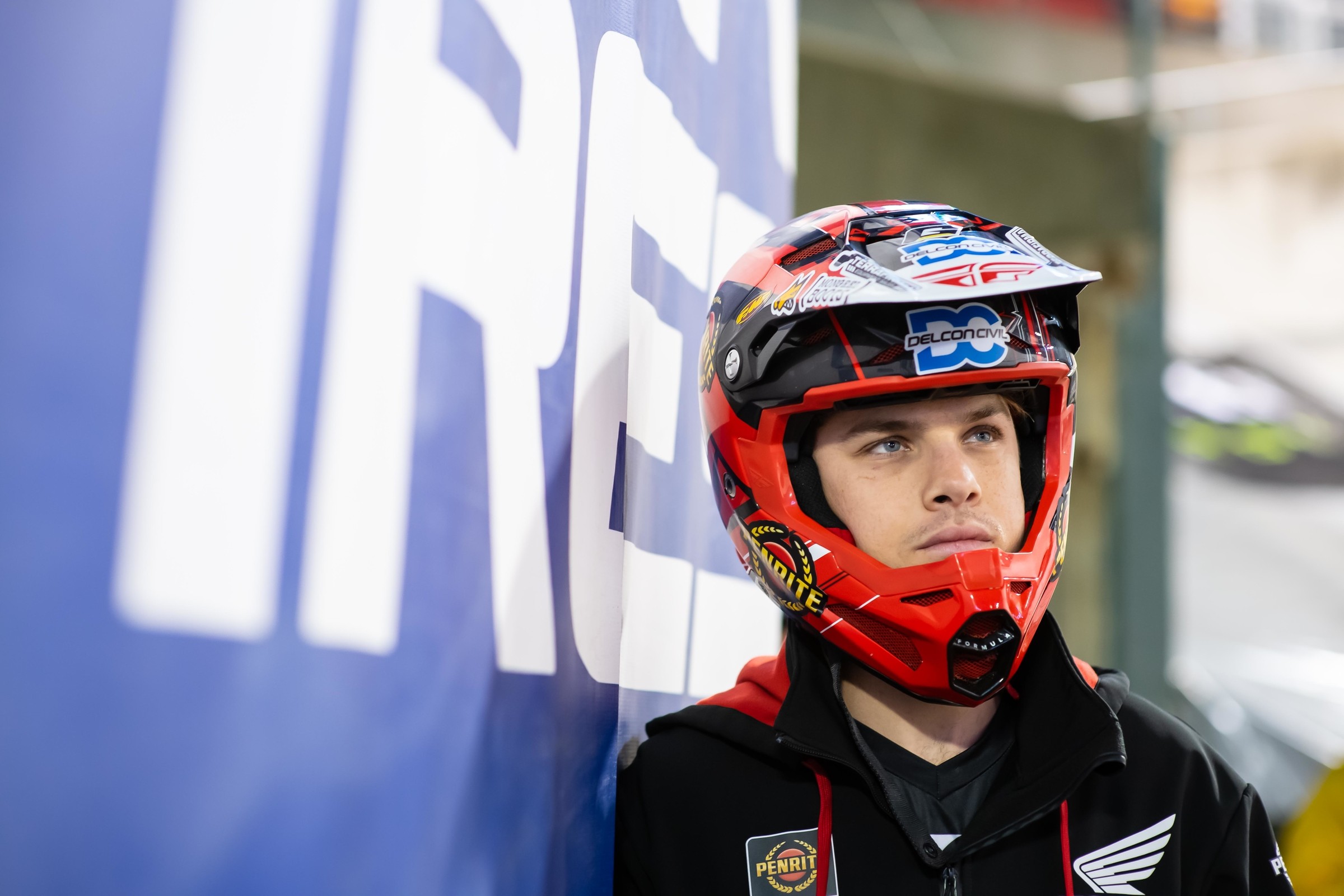 Ken Roczen still holds the red plate, but not by much. After Eli Tomac won in Oakland and Cooper Webb slipped by on the final lap and fleeced second, Roczen holds a slim, three-point lead over Tomac heading into the final race of the California leg of the championship. It’s tough to make any predictions—we saw Roczen deftly defend against Tomac in Glendale, while Tomac was clearly better in Oakland. Heck, we can’t even definitively say one of them will leave with the red plate; if Tomac wins and Roczen takes second they’ll be tied for the lead! It’s going to be an interesting night, no matter who leaves wearing red. –Aaron Hansel

Unlike in the 450SX Class, we did see a change in the points lead last week in the 250SX West Region when Dylan Ferrandis won in Oakland and cleared out a spot on his blue machine for the red plate. The gap is small though, just two points over Justin Cooper, and Cooper could very easily take it back in Petco Park. Even if Ferrandis happens to be the faster rider on Saturday night he’s a mere bad start away from handing the red plate back over to his teammate. And of course, like with Tomac and Roczen, it’s possible Ferrandis and Cooper could even tie in points. You know they both want that red plate heading into the break. We’ll see where it ends up when the checkers fly. –Hansel

After a DNF in Oakland, Michael Mosiman’s points situation is looking pretty bleak. The Rockstar Energy Husqvarna rider now sits tenth in points, facing a whopping 46-point deficit to championship leader Ferrandis. At this point Mosiman has the freedom to, in his words, “be going to be going for broke from here on out.” We saw how exciting that heat race was with Mosiman and Austin Forkner in Oakland. How much more exciting can Mosiman make things now that he’s got nothing to lose? –Hansel

With Jett Lawrence and Christian Craig out, GEICO Honda won’t have anyone to represent the team in San Diego this weekend (they didn’t in Oakland, either). That leaves red representation in the 250SX West Region up to Penrite Honda, who was certainly up to the task last weekend. Luke Clout and Mitchell Oldenburg had a great heat race, and the two finished fifth and sixth, respectively, in the main event for what was the team’s best collective finish of the season so far. Following a mid-week crash, Oldenburg’s status for this weekend is in doubt, so it may be up to Clout to fly the red flag. –Hansel

Those aren’t words that have typically been used to describe Justin Hill in the last several years, but that’s exactly what’s going on in 2020. The SmarTop/Bullfrog Spas/MotoConcepts Honda rider has gone 11-11-12-12-8 in the first five races, and he looked especially good last weekend in Oakland. We spoke with him afterward and he mentioned how motivating a good start is, and that he thinks he should have finished even higher than he did. More guys in the mix is always a good thing, so if Hill gets another good start in San Diego he may take another step to getting there. –Hansel

If you’re in the 450SX Class you never, ever want Cooper Webb to start getting fired up. The Red Bull KTM rider is most dangerous when armed with his trusty fiery temperament, and when he’s able to focus it, things can get pretty sobering out there for the competition. We caught a glimpse of that in Oakland, when Webb came out swinging early, lost some time, then regrouped before mounting a bigger charge than a holiday shopping spree. It’s anyone’s guess whether or not he’ll be equipped with that intensity in San Diego, but if he is it’s going to be fun to watch. -Hansel

As Jason Thomas alluded to in his Staging Area San Diego preview yesterday, this year’s layout and build in Petco Park will impact the entire weekend. With two whoop sections back-to-back (separated with a 180-degree bowl turn), the build and (possible) breakdown of these puppies might be the death of some riders. And as Hansel mentioned above, Cooper Webb’s coming off a big come-from-behind charge against Roczen in Oakland and could carry that momentum into San Diego and have the wheels blown right off his Webb wagon when he hits the whoops for the first time on Saturday. This part of the track can be a big time gained/lost for some come the gate drop on both main events. -Mitch Kendra

Malcolm in the Middle

No, I’m not referring to the TV show from the early 2000s. Yes, I’m making a bad pun based off the name of that show—bear with me—because when Malcolm Stewart is in the middle of a lap and about to hit the whoop sections, you might want to keep your eyes on him. We’ve been teased at his whoop speed this year—let’s just hope we get to fully see it this weekend. -Kendra

Carson Brown and Martin Castelo have quietly been putting together solid results fr in 2020. The JMC Motorsports Racing teammates have both finished inside the top ten once (Brown finished ninth in St. Louis and Castelo finished tenth in Oakland) and are in the top 15 in points (Brown sits 11th, Castelo 14th). With one final round before the championship shifts East, another good weekend could have both riders closer to top ten in points. -Kendra

After three different winners in both classes at the first three rounds, we’ve started to see how the championship pictures are starting to form. With a shift in the championship after this weekend’s San Diego Supercross, the 250SX West Region will have four more rounds (two East/West Showdowns and another Triple Crown). Will we see another rider claim the top spot on the podium or will the lead group of Dylan Ferrandis, Justin Cooper, and Austin Forkner take the remaining checkered flags? Brandon Hartranft has recorded a few podium finishes and we know Alex Martin has been on the box a few times throughout his career, but will one of them—or someone else—be able to take the top spot this year?

In the 450SX Class, Justin Barcia started things off early but since then Tomac and Roczen have traded the last four wins. With defending champion Webb, 2018 450SX champion Jason Anderson, Blake Baggett—who all have recorded main event wins—rookie Adam Cianciarulo, a remolded Justin Hill, and the speed other riders like Zach Osborne have, the possibility for more than three winners this year is high. Webb, Anderson, and AC are creeping into the picture for possible wins and maybe this weekend one of them gets it done. -Kendra