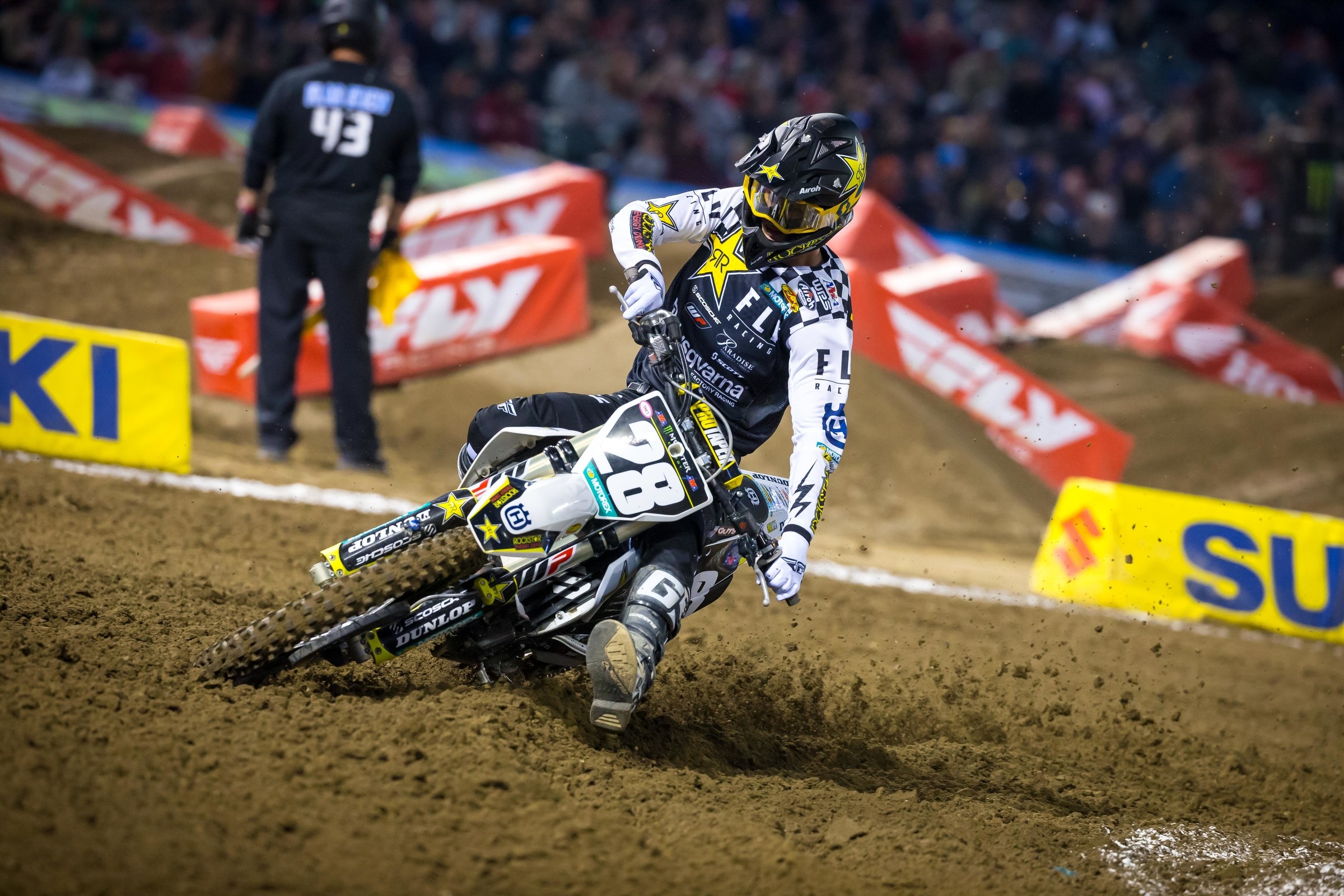 Rockstar Energy Husqvarna’s Michael Mosiman started his night in Oakland, California, at round five of Monster Energy AMA Supercross by leading his heat race. Mosiman was caught by Monster Energy/Pro Circuit Kawasaki’s Austin Forkner mid-way through the first race of the night and the two put together quite a fun battle to start the night.

Unfortunately for Mosiman, his night would go south in the main event. A washout that resulted in a big pileup ended his night early, but he managed to escape injury free.

Our Aaron Hansel caught up with Mosiman at the end of the night.

Racer X: You didn’t get injured or anything in that crash, did you?
Michael Mosiman: I hit my head pretty hard. I don’t have any symptoms currently so we’ll see. It was a rough night overall. But there were a lot of positives and I felt really racy. In practice we made some pretty major suspension changes with the linkage and a softer shock to give me some more comfort, which is something I’ve kind of been searching for. I think we found something really good, and yeah, I was really racy today. I had a good heat.

A great heat!
Yeah, thanks.

The crowd loved it too.
It’s so fun to stoke the crowd. That’s my favorite, when the crowd is into it. There are so many times when you’re in a race and the crowd is into it but you’re not the one they’re watching, it’s the race ahead of you. So it’s cool to be going for the lead and battling back and forth. We didn’t give up an edge. Then in the main, didn’t get the best start and had a pretty hard crash like three or four laps in. I hit my head pretty good and the bike had an issue. I couldn’t go anymore and pulled it in. But we’re healthy and I learned a lot. The points are pretty bad now so we’re just going to be going for broke from here on out.

Yeah, with a bad points situation you’ve got nothing to lose, you can just send it every round!
Essentially, yes.

In that heat race you guys [Austin Forkner] were driving it in on each other pretty good. How about when he was on the brakes so hard to block you, he was on a stoppie? Was that surprising?
Oh my gosh, I felt like the dude was on a nose wheelie for like 30 seconds! I watched it back on TV and it was a split second, but it seemed like a long time! Some of my friends who were here were like, “Dude, you should have just kicked his back end around!” It was nuts. Austin really wants to win and he’s racing hard. The guy hasn’t done me any favors and I don’t plan on doing him any either. I’m going to race him hard. I respect the guy because I think everyone deserves respect and I don’t hate him. But he’s definitely one of the harder guys to love. We’ve raced for so long. He has a certain attitude, like he’s better than everyone else. I think that rubs some of us wrong.

Things are HEATING up fast tonight in Oakland ? #SupercrossLIVEpic.twitter.com/w1DVgNUorn

That’s okay to print?
Yeah. I don’t want to stir trouble, and if the guy would go to dinner with me, I’d do it right now and we could talk things over. I’ve seen him in online bible study before and we’ve chatted and sometimes he’s a cool dude. But other times, less so.

Race face, man.
Absolutely, and I’ve got one myself. It’s all good. I think even he would say we’re all good. We race hard and there’s a certain level of respect for each other. Even though we may not love each other much. But if things got hectic, I’d have no problem going up to him and talking to him.