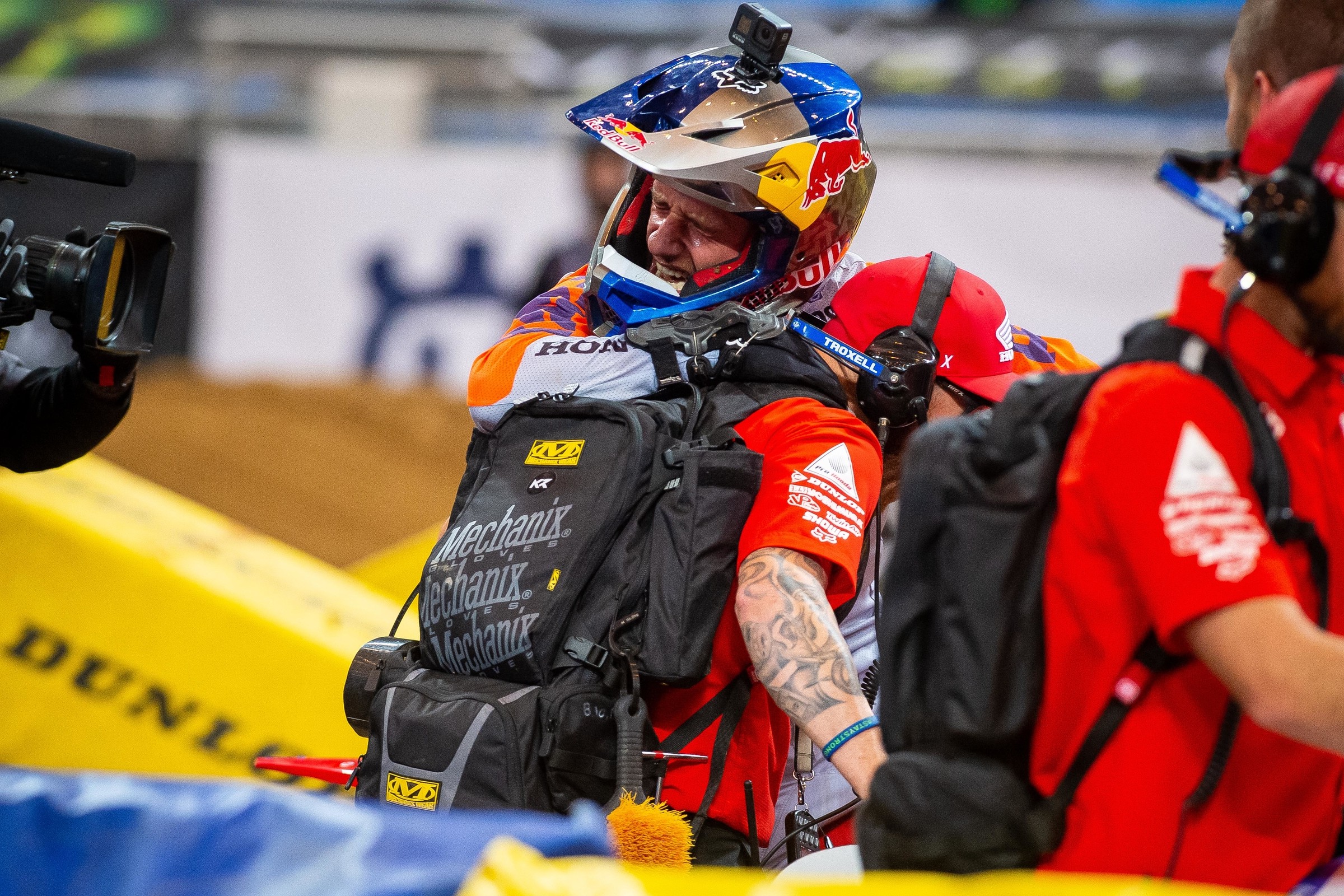 Finally. Finally. Finally. Ken Roczen has won a supercross again. After devastating injuries, illness and far too many close calls, the Honda HRC rider has clawed his way back to the top of the supercross heap. Roczen’s last Monster Energy Supercross victory came at the second round of the 2017 championship, but this three-year journey feels more like five or even ten, as Ken has faced devastating injuries, illnesses and a series of dramatic near-misses, even losing a race last year by the closest margin in the history of the sport. This is a feel-good win not just for Kenny, but a rare victory that probably even made his competitors happy. With all he has been through, it’s impossible not to root for Roczen to at least sample life at the top one more time. Serious title fights can come later—this is just a singular moment for Roczen to savor.

As is often the case after so much struggle, the loses come so hard and the wins suddenly come so easy. Roczen suddenly had zero drama at all in this race. He started third, got inside of Jason Anderson in turn one to take second, then made a quick pass on Zach Osborne to take the lead. From there, he simply checked out, and from there managed the race to the checkered flag.

“I made a move pretty quick on Zach,” said Roczen. “I felt really good on the bike, I felt really good about that. We were tinkering around on it in practice but we left it for the main. We left it the same from the heat race, we were good in the heat race. The tower was in a place after the finish so you could get a good look at it, which was terrible! It made the race feel super long! We were in a good position, and we’ve messed it up in the past. It was fun. I took it all in, but when you see three minutes and 50 seconds to go, that’s still like five or six laps. Then the last lap, I felt like I was singling everything! It’s still pretty surreal. It’s amazing right now.”

On this night, Roczen was the best of the bunch, but behind him, man is this early 450 field closely matched. The pack was pushing hard and yet found it hard to make moves. Eventually, though, it was Justin Barcia taking second on his Monster Energy Yamaha, despite feeling somewhat under the weather. That was a strong follow up to last week’s win.

“Tough day but it was good, I feel like I rode better than Anaheim,” said Barcia. “Main event was crazy, Kenny was riding extremely well out front, Jason was riding was really well behind me. I guess I was alone but I had to push. I didn’t have it in me to get the win tonight, but I had Jason behind me so I had to keep a solid pace. I had a little bit of juice at the beginning, then the tank kind of went empty. I pushed through it as good as I could. It was an exciting ride. Tonight felt like a win. I think if this was a year or two I wouldn’t have been in this situation. So it’s cool.”

The pack was crazy behind Barcia. Anderson put his Rockstar Energy Husqvarna in third, battling past his teammate Osborne, and holding back the advances of riders like Adam Cianciarulo, Eli Tomac, Justin Brayton and Malcolm Stewart. Anderson is quietly building a solid start to the season with a fifth and a third through two rounds.

“I feel like my races have been pretty drama free so far,” said Anderson. “Each race I’ve been making good moves, nothing crazy. I feel like my heat races have been the craziest thing, I almost ended up on the concrete in that one. I feel good, I just need to work on my starts and maybe some speed so I can battle this guys even harder.”

The rest of the 450 field? Where do you even start? Somehow Monster Energy Kawasaki’s Tomac ended up fourth, he came through the first rhythm lane in about 18th place off the start. He made passes early and got to the lead group, but that early charge might have taken some energy out of him, as once he got to the Anderson/Osborne/Cianciarulo/Brayton/Stewart pack he couldn’t get around quickly. Cianciarulo and Osborne got into a battle with Cianciarulo making the pass and then Osborne block passing him back hard, and that caused Cianciarulo—fastest in qualifying—to lose spots. Cianciarulo battled back, though, to get into fourth place. Behind him, Osborne and Tomac dueled for most of the race, with Tomac getting the nod. On the final lap, Cianciarulo crashed in a corner and lost spots to Tomac, Osborne and Stewart. Tomac, from near last off the start, had somehow salvaged fourth.

Osborne was fifth, a huge improvement over last week, where he was sick and suffered crashes throughout the day at Anaheim. “All-in-all it was a good night and a good rebound from last weekend,” Osborne said in a team statement. “It was good to get a solid finish and restart my season after being really ill last weekend.”

Stewart, his Bullfrog Spas/SmarTop MotoConcepts Honda, was a strong sixth, a career best. Cianciarulo was scintillating in practice but the last crash cost him and he finished seventh. Justin Brayton started up front and rode well early, but he faded a bit down the stretch and took eighth. Blake Baggett overcame a bad start to take ninth on his Rocky Mountain ATV/MC KTM, with Aaron Plessinger in tenth.

Justin Hill was 11th, and then came defending Monster Energy Supercross Champion Cooper Webb, who looked listless in 12th. It’s the worst finish for Webb since switching to KTM last year. A week ago, Webb, fighting illness, was able to salvage a third-place finish. He wasn’t able to find that magic this week.

“Tonight definitely didn’t end up how I had wanted it to,” said Webb in a Red Bull KTM team statement. “I struggled all day to get comfortable and unfortunately, I was just not able to make it happen tonight. We are going to regroup, work on getting healthy and hopefully get back up on the podium next weekend in Anaheim.”

In the 250 class, Monster Energy/Pro Circuit Kawasaki’s Austin Forkner completed a mini comeback of his own with the victory, in his second race back after tearing the ACL in his knee last season. For Forkner, the win was significant in two ways. First, St. Louis marks a home race for the homestate native, who grew up about four hours from the stadium. Second, he won in the opposite manner of his races last year, which featured blinding speed but also close calls and crashes. Forkner was third in practice, but he said he was totally fine with that, and then said he was happy that he never crashed or really had any close calls throughout the weekend.

“It was good, I was obviously happy to get a win at St. Louis, it’s kind of like a bucket list type win, this is the closest race to home and I’ve been coming to this race for a long time,” said Forkner. “Also, this is my first win since my ACL, so it just proves to myself I can still do it and still get up here. Hopefully I can keep it going and keep clicking it off.”

Last weekend, Monster Energy/Star Racing Yamaha’s Justin Cooper tracked Forkner down an applied some pressure, and Forkner crashed. This time Cooper got a worse start, and couldn’t get the Kawasaki rider in his sights. He took second.

“Main event was pretty hectic for me, I did a pretty big (jumping) line right off the bat from seventh, it was kind of risky and it didn’t really pay off,” said Cooper. “I actually came up short in the same rhythm and looking up to make sure I didn’t get landed on a few laps later. I was just trying to be smart—track was definitely breaking down. Good race, started a little too far back and wasted too much energy trying to come up through.”

Forkner said he just felt much sharper than he did last weekend. But he had to fight back the mental block of getting his first win post-ACL surgery in the main.

“I’d say about eight laps in, I told myself ‘Don’t make a mistake like last week,’” Forkner said. “And once that happened, I started tightening up. When you’re out front the whole race, it’s like silent, and you’re kind of fighting back those negative thoughts.”

“There wasn’t one point where I wasn’t going for the win, I just couldn’t get it done,” said Cooper. “I could see where he was the whole time, he was riding pretty flawless. I tried, I made kind of a last ditch effort, but way too late. But it was a good learning night for me. I did a lot of passing on kind of a tight track, I feel I rode just as good as A1 but I just have to be up front to challenge for the win.”

The Forkner/Cooper 1-2 was solid but there was chaos through the rest of the field. It started with defending 250SX West Champion Dylan Ferrandis and contender Michael Mosiman going down hard in the first rhythm lane off the start. Both were shaken up but got going again, Ferrandis taking a disappointing 12th after a trip to the mechanic’s area to fix his bike. Further up front, GEICO Honda rookie Jett Lawrence started second and rode very well, keeping serious pressure on Forkner for the first ten minutes of the race. Then, the 16-year-old’s race started falling apart with mistakes, and he drifted back to fifth. Still, a great ride in just his second-ever supercross. His teammate Christian Craig was running fourth and looking to get around Lawrence to snag a podium, but Craig slammed tough blocks on the landing of a jump and hit the ground hard. He eventually got up and was okay, but his race was over.

Through all of this, Troy Lee Designs/Red Bull KTM’s Brandon Hartranft pulled through for third, his first career podium. He withstood serious heat from JGR/Yoshimura Suzuki’s Alex Martin on the last lap.

“I started off third, dropped back to like fifth, maintained that for like half the race,” said Hartranft after taking his first career podium. “I hopped into third. I didn’t even know until a few laps from the end when I looked at the board, it said third. I needed to get this done now. AMart was really on me on the last lap. I’m so excited.”