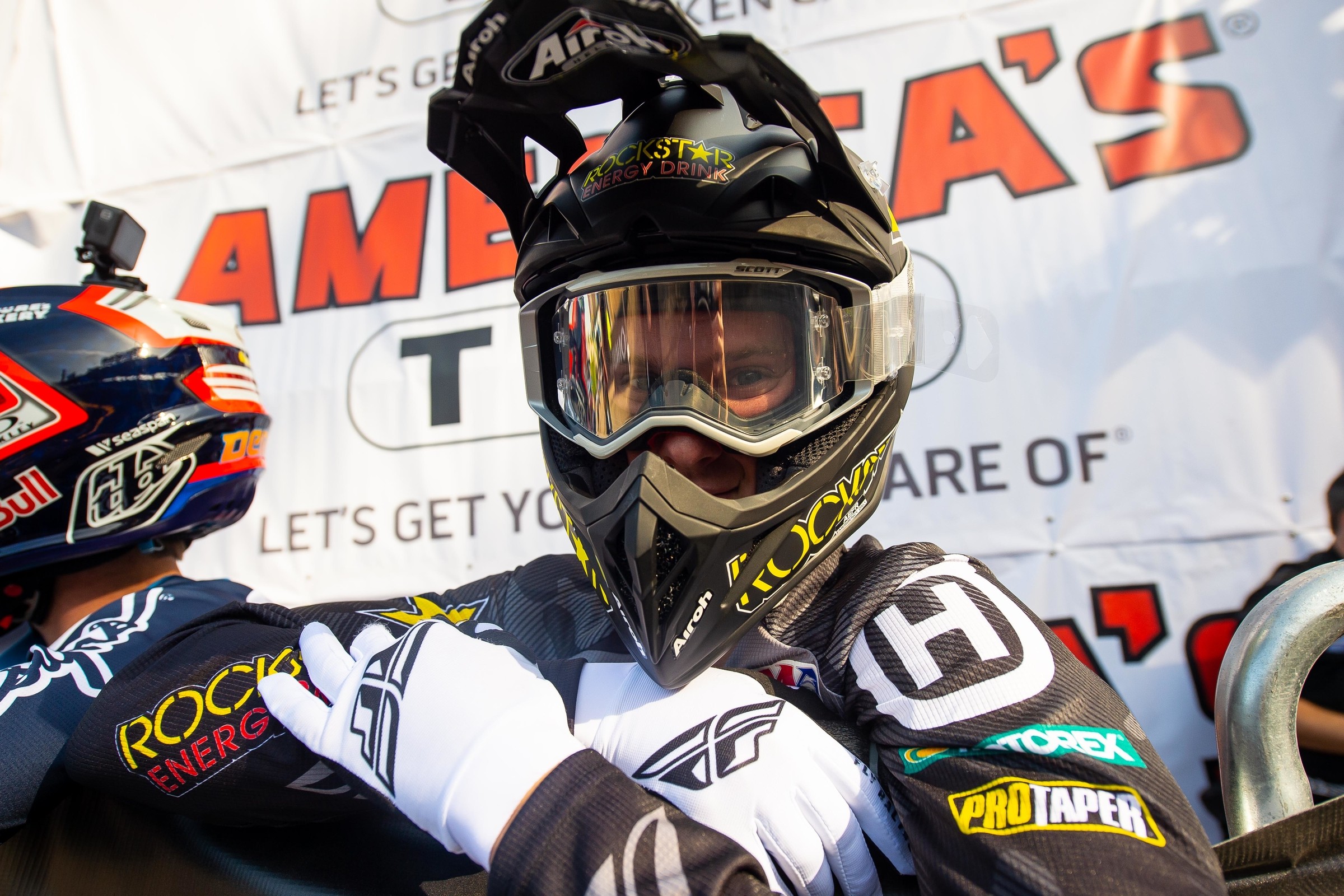 Michael Mosiman was putting in a solid start to the new year until a crash in his heat race resulted in a trip to the last chance qualifier. When the gate dropped, Mosiman got out front safely before taking the checkered flag. The Rockstar Energy Husqvarna rider managed a fifth-place finish in the main event that became a fourth when Austin Forkner was docked two-positions. This fourth-place finish tied his best result from 2019, but you wouldn’t think that if you simply read this interview below—which he then turns around and becomes the interviewer, not the interviewee.

Gas Monkey Energy/AJE Motorsports’ Jacob Hayes was coming off a shoulder injury that he suffered during the Australian Supercross Championship in November. With a limited amount of time on the bike, Hayes returned to the starting gate for his second year of AMA Supercross, where he finished 11th in the main event.

Our Aaron Hansel caught up to the Husqvarna riders following the night show.

Note: This interview was conducted immediately after the race and before the ruling on Forkner’s penalty.

Racer X: Well, you did crush the LCQ.
Michael Mosiman: But I don’t even think I rode well in the LCQ. I was making mistakes and didn’t really have anything going for me in the whoops. It wasn’t pretty. But, I learned. The track demanded patience, and when I got to the main I was really confident in my starts, ripped one from the outside, and was in the mix. We were battling pretty good there at the start, made a few moves, and I was fourth or fifth. [Dylan] Ferrandis got by me and I tried to latch onto him. I’m so much better than how I rode tonight. I know the track was making everyone make a lot of mistakes, so that’s a little comforting, but I still wasn’t proud of how I rode. To get out of here with a fifth is nice, it’s solid, and who knows what will happen with the whole [Austin] Forkner thing, so it could be a fourth. That’s solid points the first round and we’re still in this thing.

You’re being pretty hard on yourself. Listening to you describe your night, if I hadn’t seen your race, I would be imagining it much, much worse than what it was.
Like, “Oh my gosh this guy is a super squirrel!”

Yeah! But you were fifth!
I’ve been riding really good in the off-season and I’m not coming in over confident, like I got this thing, but I have been riding really good and I am capable of that. It’s just like if I was at a practice track and I had some inconsistent lap times and blew a rhythm every now and then. I wouldn’t be super stoked on that. Yes, I got a solid result, but I want to be better.

How much of this is jitters?
On an emotional level there’s probably something there, but with the first round, I think my strategy is to downplay it and not to try to be like, “I have to show up. If I don’t do good at this race it’s over.” Sometimes I do that to a fault and don’t come out as racy as I need to. Those guys were pushing me around in the heat race a little bit early on. I can’t have that. But I got through it and now we’re in a little bit of a rhythm and we’ll go meet those guys next week.

I was talking with your brother [Josh Mosiman of Motocross Action] a little bit in the press box before the LCQ and I asked him if it made him nervous watching you have to line up for the LCQ. He said no, and that it was a good thing because it would fire you up.
I kind of have a little bit of that reputation, that it takes me a little while to get going. Like in that first practice, not great. Second practice, not great. Third practice, better and more racy. So, more time is better for me. More time on the track, and more time in a setting. The more time you get the better, I’ll be able to perform.

Cool. Well, that was all the questions I had for you.
Should I ask you some questions now?

You want to? Go ahead. You’re going to interview me now?
Okay, Aaron, how many Anaheim 1’s have you been too?

Probably fifteen or sixteen.
Was there anything about this one that stood out to you?

Yeah, probably. First thing I’d say Adam Cianciarulo. Just how much hype there was surrounding him and he actually lived up to it. I mean it was a lot of hype. He’s never raced a 450SX main in his life. But then he was the fastest qualifier and led laps! And also you man! Talking to your brother, when I asked him if he was nervous about you lining up for the LCQ he looked at me like I was silly. Like, ‘Not at all, he’s not going to have a problem,’ and he was right. I thought he was going to say he was nervous about it. What about you? How many have you been to?
As a spectator, over ten. It was kind of a Christmas/New Year’s tradition. As a racer, two. As far as anything particular that stood out to me, I guess as a general thing, I felt people were making mistakes more at this one than usual. I felt rough, but then watching the 450 guys I was like, “Okay, everyone is making a lot of mistakes.” It was comforting. Also how technical and rutted the track got.

That’s a good point, especially for the first round.
Yeah, for A1. I always picture Southern California as being hardpack, but this wasn’t a whole lot different than what you see at Oakland. That may be a stretch I guess.

Yeah, I don’t know man, Oakland is pretty soft!
Yeah okay, that’s a stretch. But anyway, it was tough.

Okay well, if you’re done interviewing me I’m going to hit stop on this voice recorder.
Do it.

Jacob Hayes: Where do you want me to start? There’s a lot!

Racer X: Anything that’s relevant man!
Some people may not know, but I went to Australia again and got hurt. I dislocated my left shoulder and broke a bone at the top of my humerus. That was November ninth, and I didn’t get released to ride until about December 16 or 17, and from then on I’ve just been wide open. I did eight days of outdoors, and today was my sixth or seventh day of supercross. I told myself I just want to make improvements every time I ride, and the guys on the team have been really helpful and supportive. I knew mentally it wasn’t going to be the best thing. I wanted to come out here and do well, but I also knew where I was at fitness-wise and with prep. So today, free practice wasn’t a beauty. [Laughs]

First timed practice wasn’t a beauty either, but second timed practice was better. I knew what I needed to do though, I just needed to get a couple good starts and keep my head down. I did that in the heat race and was fourth there for a little bit and got fifth. I got a good start in the main and just fought my hardest. I was eighth for a while, but around eight to ten minutes my body snuck up on me and I got tired. I just fought my way to the end and Troll Train [Alex Martin] got me at the end. So I got 11th, but honestly, I can’t be disappointed with that considering how little time on the bike I had. Twisted Development is doing our engines so the thing is ripping, and I like the Husky. The thing is really good. It was a benchmark and we’ll improve from here. I want to be fighting in the top five.

I thought you looked pretty good in the heat race.
Well thank you.

That’s not to say you didn’t look good in the main, but I was kind of watching Forkner, Ferrandis, and Cooper in the main. But why am I talking about those guys when I’m interviewing Jacob Hayes?
[Laughs] I talked to Cooper and I told him I liked his style. I gave him a compliment before the main event. I think that’s what we as riders need. We’re racing for a lot of money and there’s a lot on the line. If you have an opportunity, you take that sucker, you know?

Yeah! I mean, I was never pro though so what do I know?
[Laughs] It gets hairy out there, and I know we riders get a little disappointed, but when push comes to shove I think anyone out there will give it when it’s needed. But today was good and I’m just happy to be here. I didn’t even think I’d be able to race A1 I was so nervous with my shoulder. It was weak and I’m just building the strength back up. I just put my head down, and to get 11th, I was blown away.

How are you gelling with the new team? [Gas Monkey Energy/AJE Motorsports]
It’s all relatively new. I’ve talked to Tony [Eyrich, team founder], and we have a great relationship. But meeting my mechanic and my teammates, the whole team, today was the first time I met everybody.

Today was the first time you met everyone!?
I’ve already met Tony, but today was the first time I met the team as a whole. There was a lot of new stuff at A1! Everyone was super helpful and super positive, which I needed today. I knew I was going to be a little down but they all lifted me up, which was nice. They all told me to keep my head down, and that they knew what I could do. That was super helpful and they’re a good group of guys. They really work hard and that’s what I like.

With you recovering with your shoulder, and I know this is hard to predict, but how soon before you can get to that point where you are battling in that top five?
After A2, at Phoenix [Glendale], I want to be back to my normal self. Aggressive and getting up there mixing it up with the factory boys and letting them know the #45 is here to do business.