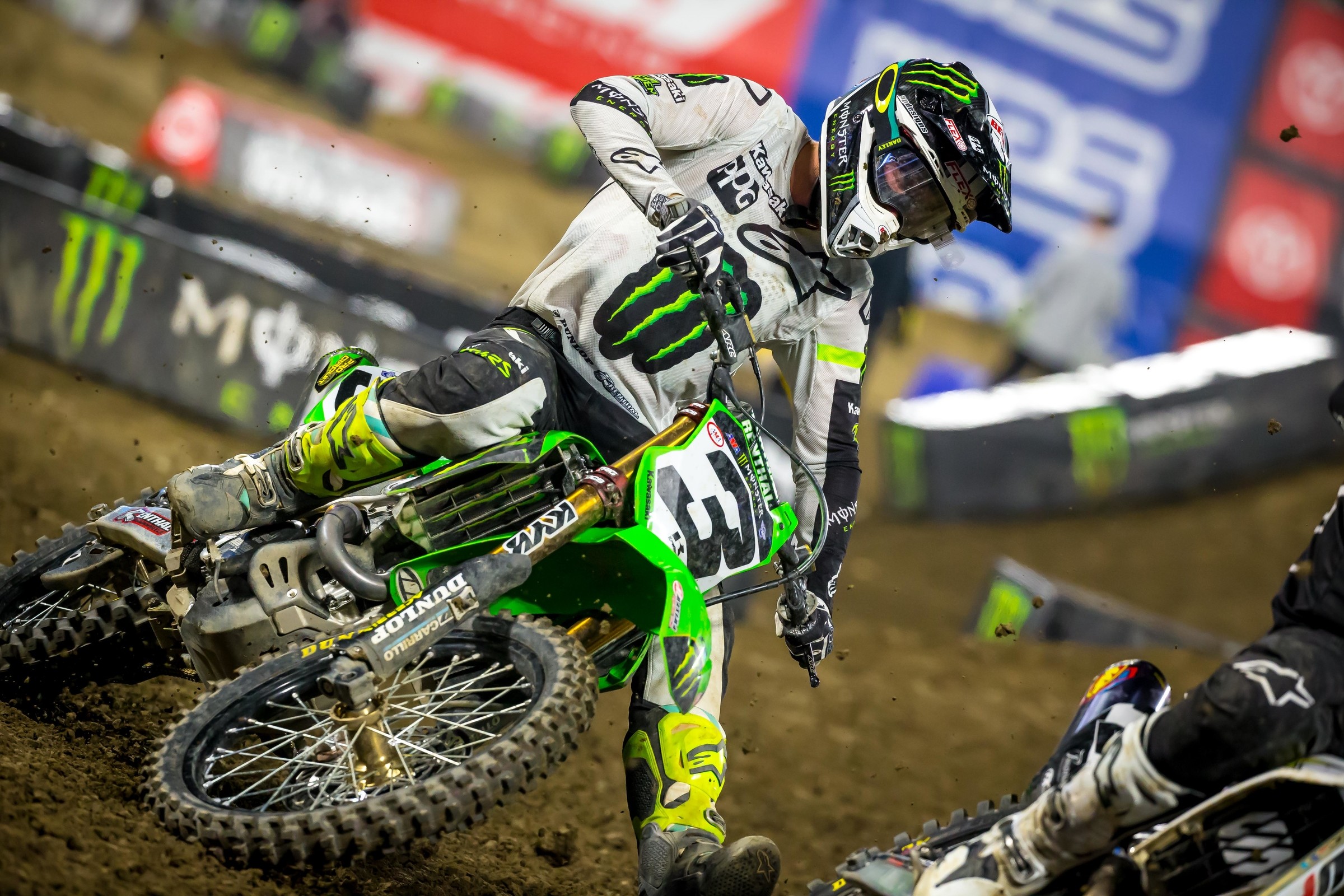 At Anaheim 1, Monster Energy Kawasaki’s Eli Tomac was riding around alone in the main event and wasn’t able to make as many passes as we’ve seen him make before. He was 11th by the end of the first lap and managed to make his way up to seventh by the checked flag.

Malcolm Stewart and Dean Wilson, who both were in a position to win the 2019 A1 450SX main event, were making their returns behind the gate after injury. Stewart, who suffered a broken femur at the Glendale Supercross last January, had raced several off-season races but was lining up for his first AMA Supercross since January 12, 2019. Wilson isn’t fully healthy after a hip injury he suffered at the Monster Energy Cup but he’s made a lot of progress I the last month and hopes to be at full strength within the next month or so.

Our Aaron Hansel catches up with Tomac, Stewart, and Wilson after the opening round.

Eli Tomac: I was struggling with overall comfort all day. In the off-season you’re always trying to improve, always trying to up your game no matter what. I just never had my comfort all day, and that’s frustrating. And to be honest I just had arm pump really bad all day. When you get that you’re just kind of along for the ride, and I was just kind of hanging out stuck in that position. I saw the pack of guys in front of me, that three or four-guy battle about a turn in front of me and I wanted to catch them but was never able to make that push. We learned stuff and I gotta react and get better before next weekend.

Racer X: In terms of the arm pump, is there anything you can attribute it to? Didn’t you get arm pump one time because you were digging holes and fixing a fence during the week or something?
Eli Tomac: [Laughs] There were no reindeer games on this one. It was just me not being able to hold on. That’s frustrating, but I know we can fix it.

Malcolm Stewart: The heat race was going good, and then Eli [Tomac] and I got into it and I went down. That was kind of all she wrote. At least I still qualified, that was good. In the main event I had a terrible start. I felt like I was like 19th. I was like, “Well, looks like we’re gonna have to shoot for top ten in this one!” Midway through the race I was kind of in a dead spot, but then all of a sudden, I just started going and clicking off laps. I made a few passes and next thing you know I was sitting in like ninth. I caught up to Justin Brayton, but I have to give him credit. He looked back and realized it and with two minutes to go he white knuckled it. I was like, “Why you doin’ me like that JB?” [Laughs] But for me I’m taking everything slow and trying to get some good results. I felt like if I would have gotten a good start there’s no doubt I should have been top five. But as everybody knows, starts are 90 percent of the race. So we’re going to go back to the drawing board and figure out how to get out of the gate and we’ll be fine. I’m looking forward to it. It’s a long series, we’ve got 16 more races to go, and I’m excited. We’ll just take it race by race, set little goals, and go from there.

Racer X: You raced the Monster Energy Cup of course, but it’s been a long time since you’ve been on the gate at an actual supercross race, with whoops even! How’d it feel to be back?
Malcolm Stewart: It felt great! The whole feeling, everything, it’s so good. And I felt like I was the fastest guy in the whoops today. [Laughs] It was cool just to be back. I was sitting on the bike looking at all the fans and I was like, “Man, there are a lot of people here! I haven’t seen this many people here since like 2002!” There were a lot of people and I want to thank all the fans for coming out and supporting us. I had a lot of fans who were rooting me on, and that was cool too. Just take it race by race and keep building. We learned a lot tonight about the motorcycle.

Not that you’ve ever been an unpopular guy, but lately it seems like you’ve been surging in popularity. There’s a lot of Mookie hype! Is that a fair statement? Do you feel that’s true?
I don’t know! I don’t really know, I’m just a cool guy man! You tell me, you’re the one over here interviewing me! [Laughs] Something has to be right! I’m just a laid back guy. My old man always told me to treat the janitor like he’s the CEO. I’ve always done that. I’m no better than anyone and they’re no better than me. We’re all human here and we’re here to enjoy ourselves and live the lives that we do. We set goals and enjoy what we do. I’m a professional dirt bike racer giving it 100 percent, you’re a professional interviewer, you do your job right, and the fans are fans!

Racer X: Take us through it. I’m surprised to even see you here racing!
Dean Wilson: Yeah, it’s crazy. I got hurt pretty dramatically and when I was healing up my goal was to ride by December. December came and I wasn’t ready. We had our photoshoot on December fourth and I rode and there wasn’t even a chance. My hip just wasn’t ready. It was crunching and cracking. I took another three weeks off after that, and just before Christmas I started riding. It was pretty crazy. I’m just happy to be here. In qualifying I got an eighth and in the second I was ninth, so it was like, “Alright, not too bad.” The heat race I was seventh, I wasn’t very good, and in the main I was in the mix first lap, but someone got sketchy in the whoops and plowed me and I went from like 11th to last. Then I went from last to 13th, so overall I can’t be mad at anything. That was a start and I’ll get better from here.

With you recovering from injury, at what point do you think you’ll be able to give it 100 percent at the races?
I’m hoping for around [round] five or six. I broke my hip in three places, and where it hurts right now is the groin, which makes squeezing the bike tough. It sucks because whoops are my biggest strength and right now I can’t hit the whoops like I normally do because I can’t grip the bike very well. Not gripping the bikes with your knees leads to holding on more with your arms, which creates arm pump. I think once my groin and everything starts healing up and feeling better I’ll be good. I’m hoping for around round five. Obviously the sooner the better, but hopefully round five or six I’ll be back to form.