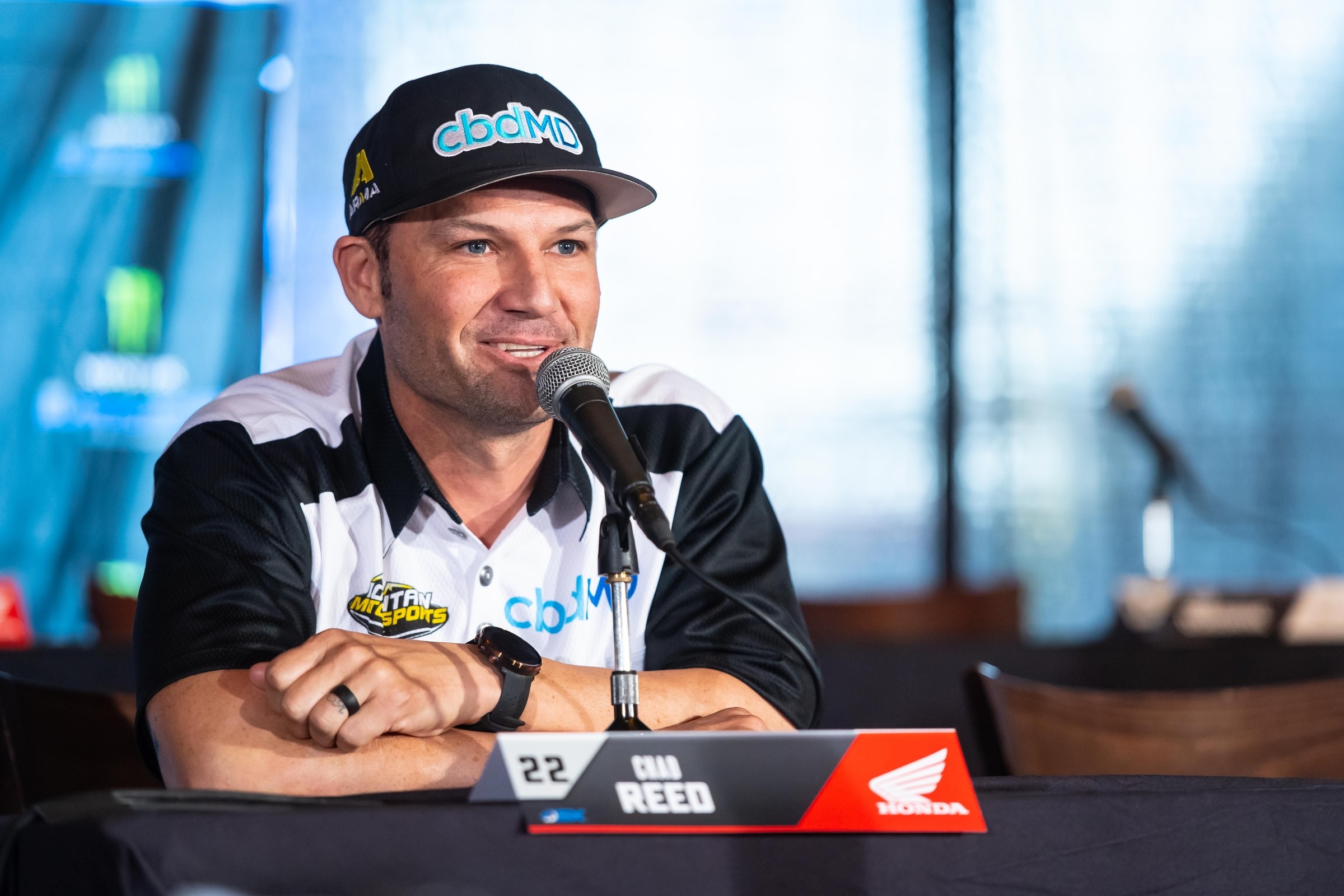 Another year of Monster Energy Supercross is upon us, which means yet another preseason press conference went down on Friday afternoon in Anaheim at Angel Stadium. If you missed it you can view it right here, but if you just want the highlights, keep on reading.

Rockstar Energy Husqvarna Factory Racing team manager Bobby Hewitt talked about how last year went, saying it was a year he’d like to forget, and how his team is in a much better place this year with Jason Anderson and Zach Osborne both healthy and ready to go. Dean Wilson is racing too, but is still recovering from dislocating his hip at the Monster Energy Cup. Hewitt talked about dealing with an immense amount of pressure in coming into 2019 tasked with defending the title, a sentiment echoed by Anderson, who said he came into A1 last year overwhelmed and had been dealing with a plethora of obligations he didn’t want to deal with. Anderson also remarked how much nicer it was to not have any pressure.

Red Bull KTM Team manager Ian Harrison, on the other hand, is coming into the season with the weight of a championship with 2019 champ Cooper Webb. When asked about finding a replacement rider for the injured Marvin Musquin, who will miss the entire season with a knee injury, Harrison explained the team’s focus would be put on Webb. He also said that even though Musquin is injured he still gets paid, and bringing on another rider would be an added expense for the team, although he didn’t completely rule out a replacement at some point. As far as the bike, he said they worked on improving it in whoops and flat turns.

As you might expect there’s been plenty of curiosity regarding the situation at Monster Energy Kawasaki with a pair of top-shelf riders in Eli Tomac and Adam Cianciarulo. Team Manager Fahey said that while this might look like a new situation from the outside, internally the team has always operated the same, with both riders on the team always getting the same resources and full support. Fahie predictably said he didn’t expect any issues with team chemistry, and that Cianciarulo’s positivity and professionalism has been a great addition to the team. Tomac backed Fahie up too; saying he and Cianciarulo had been helping each other improve by pushing each other. Tomac also said he needed to manage the season better in order to finally win a championship.

“I feel like it’s been a couple different things,” said Tomac. Last year we had an early season injury, the year before we had a crash here. Just managing the series from January through May is so gnarly. Really that’s what is on my mind for this year—trying to manage it right.”

After the presser we talked to Tomac and he said he really looked at a fast Cianciarulo as a huge asset on the track, because he feels like there’s been so many “Austrian” bikes up in the top ten at all times. He says it makes him feel better to know he might have another green ally up there in the fight with him.

One of the best quotes of the entire press conference came from Cianciarulo when the 450SX rookie was when asked if he thought he and Webb would reignite their fierce rivalry from the amateur ranks, especially considering Webb’s 2019 remark about Cianciarulo cracking under the pressure at the finale in Vegas last year. Cianciarulo downplayed any chance of their rivalry coming back, and that Webb’s comment wasn’t too bad (or even innacurate), especially considering Webb was a newly crowned champion and the last thing he probably wanted to do was answer questions about Cianciarulo. “He was probably like, ‘I have to hear about this guy again?’ It’s like a gnat in your ear,” Cianciarulo said.

Some other good quotes came from Veteran Chad Reed, who is set to make his 250th start tomorrow night in what will officially be his last season. Reed was emotional about this being his final season and was fighting back tears at one point.

"Not many people from outside of America get to come here and be loved and adored,” said Reed. “I’m proud of where I come from, but I’m proud of what I’ve done in my adult life here, too. I feel complete, finally. This motorcycle thing has been my life, my world, [fighting back tears] it’s never easy to walk away from something you love so much. I tried some car racing stuff last year and got the same feeling I did at three-and-a-half on a motorcycle.”

Justin Barcia, who looked aggressive later when the riders took to the track, talked about liking having technical input from some of the new staff on the team.

“We’ve done a lot of testing, this is the most I’ve ever ridden a motorcycle. We pretty much reset the motorcycle from scratch. It’s been nice to see different knowledge from different people, and I’ve become a better test rider through the years."

Malcolm Stewart has a lot of hype from the fans coming into this season, based on his speed early last season and a strong showing at Monster Energy Cup. Malcolm downplayed a lot of that, though, really stressing that it’s a long season, he’s going to have fun, and that he just wants to stay healthy for 17 weeks.

Justin Brayton said, after getting into the sport much later than most of his competitors, that even though he’s one of the oldest racers he had yet to reach his potential when it comes to mindset, and that having a family forces him to detach from racing, which he believes to be positive. He explained one of the biggest differences from when he was on Team Honda eight years ago is that his kids are always pulling on him, he can’t focus always totally on himself, but that’s actually made him better. Less pressure, more fun.

“I won a few state wrestling tournaments in high school but I never won any big amateur races growing up,” Brayton said, also mentioning that he did bull riding and played stick and ball sports growing up. “So to have the mindset that I can race with these guys and beat these guys has taken a long time.”

Blake Baggett, also now a father, joked that he’s become a much better multi-tasker due to having to do things like make bottles and change diapers. Otherwise Baggett talked about having a low-key off season, which is par for the course for him.

Ken Roczen, who was, as usual, sharply dressed, talked about the work of addressing the struggles of the past few seasons.

"Physically I did a bit of a reset. I just tightened up everything. Me and my trainer Blake have good structure, good communication, and we always have doctors on hand so the season doesn’t get out of whack. Also, 2019, a full year for me, that really helps out."

He also finally gave us a hint as to the specific condition he’s been dealing with—Epstein-Barr virus—and said he and the team have a good handle on it.

“It’s a super unique version of EBV.  We’re consistently getting blood panels done to make sure we’re moving in the right direction.”