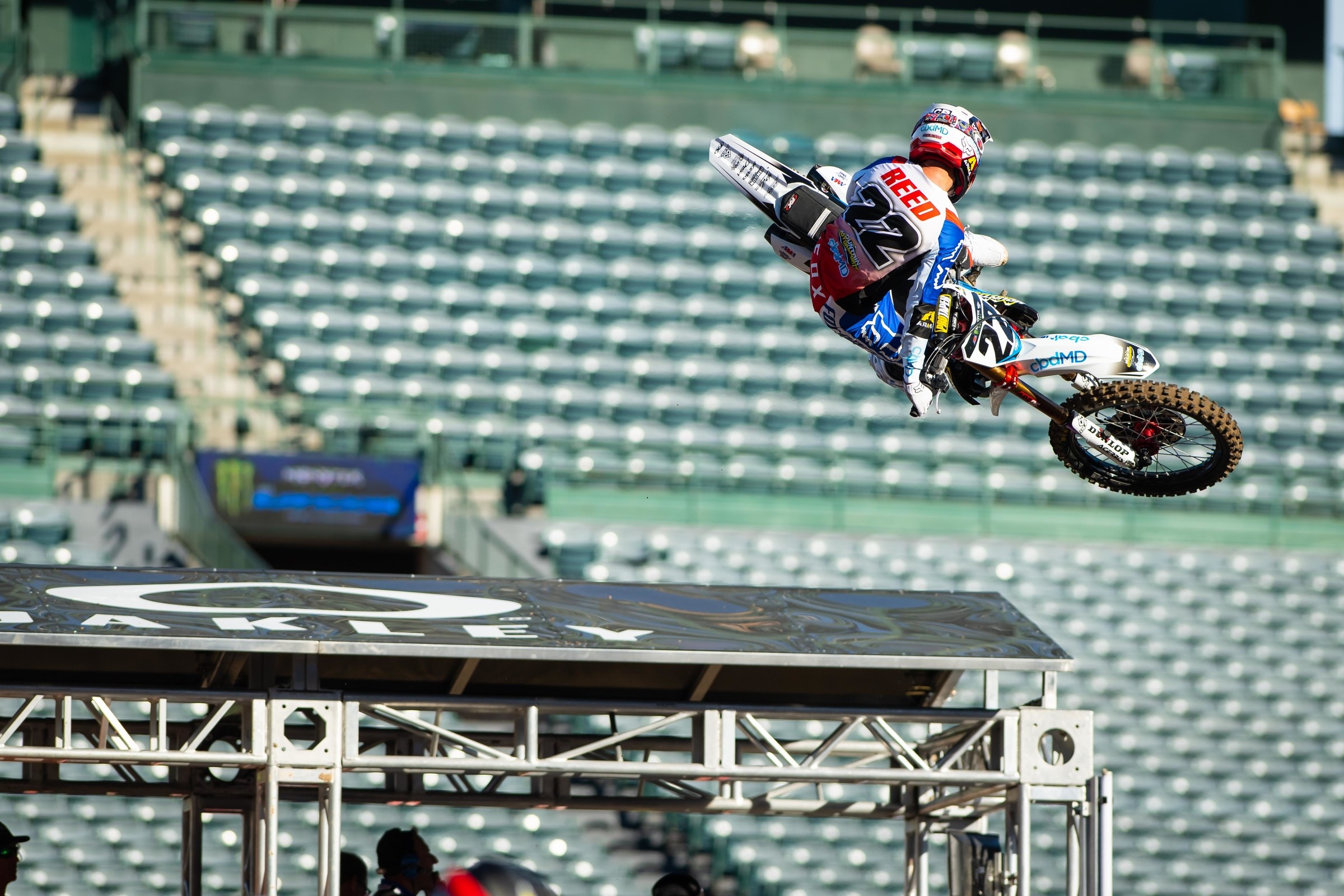 Nothing in our sport quite compares to the pressure and anticipation Anaheim 1 has. For months, it’s been the only thing on a lot of minds throughout the paddock. It’s not just the first race of the season, it’s the sellout crowd, the fact that much of the field is still healthy, and it’s the ire that a new season has finally arrived. Some riders will take the path of just making it through this round healthy. As the old saying goes, “You can’t win the championship at round one, but you can certainly lose it.” But walk away with a win this weekend at Angel Stadium, the whole industry will be talking. For the best riders in the world, it’s time to shake off the nerves and drop the gate. -Kellen Brauer

Dylan Ferrandis is set to defend his 2019 250SX West Region Championship, but he’ll have a new challenger in his path. With title rival Adam Cianciarulo jumping to the 450SX class, Monster Energy/Pro Circuit Kawasaki trots out Austin Forkner on the West this year. Forkner won five races last season before injuring his knee in a brutal crash in Nashville. In essence, we now get to see maybe the two best 250 supercross riders battle on one coast this season. Forkner has a chip on his shoulder and Ferrandis has a target on his back. Who wins? Well, that’s why we go racing. -Brauer

Tomac and the A1 Curse?

It’s hard to call Eli Tomac not winning the season opener a curse, but his 2018 crash out of the lead was so strange that it sure doesn’t hurt the argument. Whether it’s been bad starts or safe riding, the rider with the most supercross wins in the last five years still hasn’t punched off A1 on his stat sheet after six years of trying. Tomac has 27 career wins now, far more than his competitors around him, so why has A1 always slipped through his grasp? In his 450 class debut in 2014, he crashed heavily with Jake Weimer at A1 and missed a chunk of the season because of it. Then he crashed in 2015 as well and finished the main event in 20th. He picked up a fourth in 2016, then had a massive arm pump issue and dropped from second to fifth late in the 2017 race. He finally snagged his first A1 podium last year with a third behind Justin Barcia and Ken Roczen. Tomorrow night is his seventh A1 as he looks to start the season on the right foot. -Brauer

Flashback to Anaheim 1 last year and we saw Dean Wilson lead most of the race ahead of Malcolm Stewart. Though neither rider won, things were looking up for both. Then, Stewart crashed and broke his femur the next week in Glendale. Wilson rode well for most of supercross before suffering a shoulder injury at Denver late in the season. Both riders returned to the supercross track at the Monster Energy Cup where Wilson unfortunately hit the dirt again, this time resulting in a dislocated hip. Despite that, Wilson still will be lining up at A1. For both riders, they will look to work quickly back into the form we saw them just one year ago. If off-season races are anything to go by, Malcolm Stewart looks ready to go. It may take longer for Wilson to get the ball rolling off his more recent injury but look for both guys to find their groove and maybe even be battling each other out front again before long. -Brauer

When Chad Reed won the Anaheim opener in 2003, few could have told you we’d see him make the starting line in his third decade of racing 17 years later. Yet here we are. Reed could make his 250th main event start at Anaheim this weekend, further extending his record for most career supercross starts. But this season opener will be different because it will be the last season opener of Chad Reed’s illustrious career. The two-time Monster Energy Supercross premier class champ is tied for the most all-time wins inside of Angel Stadium with eight and has been a fan favorite in the sport for several years running. Without question, the stadium will be roaring when Reed makes his entrance. If you want to know what Chad Reed has meant to the sport of supercross, you’ll only need to listen to the crowd, and they’ll be sure to tell you. -Brauer

Of the four factory 450SX rookies at the start of the 2019 championship (Justin Hill, Aaron Plessinger, Zach Osborne, and Joey Savatgy), only Osborne was invited to the 2020 pre-race Anaheim 1 press conference (watch it here if you missed it). But all four riders are hoping for a better go around this year. Osborne is hoping to start this year the way he was planning on starting last year’s championship (until a broken collarbone delayed the start of his year), Hill is on a new team and bike, Plessinger needs to bounce back from his injury-shortened 2019, and Savatgy, who had a strong showing last year, will have to heal up from an ankle injury before he returns to racing with his new team. -Mitch Kendra

We saw (and later heard) how winning the 2018 450SX title affected Rockstar Energy Husqvarna’s Jason Anderson at the start of last year. So how did the new defending champion Cooper Webb handle the obligations that come with being the champion? And the weight of the #1 plate? Only time will tell so we won’t really know until May, when the 2020 #1 450SX plate is handed out in Salt Lake City. But there is the chance we find out sooner, as Kellen mentioned above, you can lose the championship this weekend. Webb, who crashed in the first turn of the 2019 A1 main event, was in 20th place when he crossed the finish line in the first lap. He managed a fifth—given in muddy conditions—which salvaged his year. If Coop can continue to salvage his bad nights like he did last year, watch out. -Kendra

Last year several riders in the 250SX class took steps to progress their career to the next step. Rockstar Energy Husqvarna’s Michael Mosiman, (at the time) Cycle Trader/Rock River Yamaha’s Brandon Hartranft, and GEICO Honda’s Cameron Mcadoo, to name a few, all took steps throughout the supercross championship. Mosiman was re-signed by the team for two more years this summer as Hartranft and McAdoo earned rides with the Troy Lee Designs/Red Bull KTM and Monster Energy/Pro Circuit Kawasaki teams, respectively. Which rider takes their career to the next level? Comment below who you think steps up their game in 2020. - Kendra

While the spotlight will be on Reed during his farewell tour and GEICO Honda’s Jett Lawrence, there’s several other Australians on the entry list. Luke Clout (Penrite Honda), Jay Wilson, Aaron Tanti, and Joel Wightman have all made the journey from Australia to Anaheim, California, to take a crack at AMA Supercross. Good luck, mates! -Kendra

On the surface things might look familiar for Justin Bogle, who is lining up for the same team he rode for last year. It’s really not the same, though. Last year Bogle was a late injury replacement for the Rocky Mountain ATV/MC-KTM-WPS squad. He had gone through a treacherous off-season where the team he was supposed to race for (Phoenix Racing) never got the support it expected, and couldn’t give him the ride he hoped to get. Also, he was bouncing back from a gruesome arm injury. Bogle completely admitted he wasn’t ready last year, and he didn’t start coming around until the second half of the season. While the Epstein-Barr Virus eventually slowed his season, he’s had time to recover. A healthy, stable situation around Bogle could make him a real sleeper threat this year. -Jason Weigandt