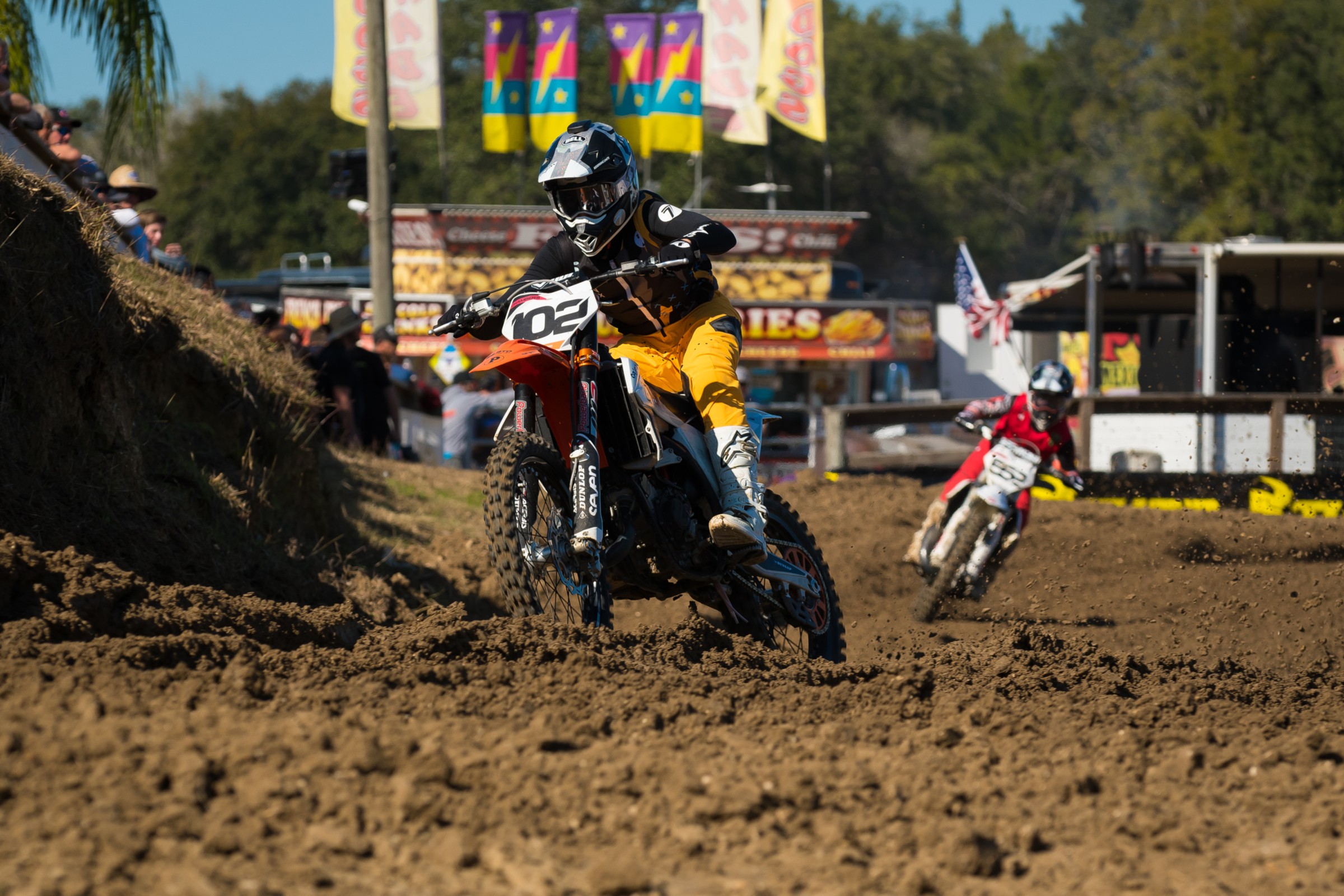 The 48th Annual THOR Mini O’s, presented by Pro Circuit, concluded last weekend at Gatorback Cycle Park in Gainesville, Florida, with the motocross portion of the historic event. The top amateur prospects from all over the country spent Thanksgiving week battling with one another, starting with the supercross portion of the event early in the week, and then three full days of motocross from Wednesday through Saturday. Following the supercross days, we wrote a supercross recap highlighting the results.

After the 1,800 entries finished in supercross, everyone transitioned to motocross with Wednesday’s practice. They also had to make room in the jam-packed pits for even more participants as a record 2,300 entries were registered for the motocross portion of the THOR Mini O’s. Racing began on Thanksgiving Thursday on the Gatorback motocross track, home of the Mini O’s since the early eighties. And if you watched the live motos streaming on the Dunlop Tires broadcast on RacerTV.com, you probably noticed the iconic Florida track never looked better.

With 45 classes and their related qualifiers to run before the event ended on Saturday evening, the racing started early and ran late, as event promoters Unlimited Sports MX kept a commitment to the participating riders and team managers to implement longer motos in the Pro Sport, A, and B classes, making the Mini O’s not only the last big race of 2019, but also the first real test of the upcoming season.

And among the many prospects gathered in Florida for the week, Monster Energy/Star Racing Yamaha’s Jarrett Frye showed everyone that he may be most ready to make the jump to the professional ranks.

Frye, who hails from Mechanicsville, Maryland, took home the Dunlop Tire Award, which goes to the participant in the Pro and A classes that accumulates the highest number of points in supercross and motocross combined. Frye won five championships throughout the week in the 250 Pro Sport, 450 A and Pro Sport classes in SX/MX. He won three of his four MX classes (250 and 450 Pro Sport, plus 250 Pro Sport). His only loss in this discipline came in the 250 A class, which was won by Husqvarna rider Hardy Munoz.

Florida’s own Cullin Park won all three of his MX divisions in Schoolboy 2, 250 B, and 450 B aboard his Yamahas, with new teammate Nick Romano finishing second behind him in Schoolboy 2 as well as 450 B.

Kawasaki Team Green’s Gavin Towers, Rockstar Energy Husqvarna’s Evan Ferry, and the KTM Orange Brigade’s Jayden Clough battled all week in the Supermini divisions. Once they got to the MX portion of the Mini O’s, Florida’s own Ferry, son of former factory superstar Tim Ferry, would make the final move in motocross to take the Supermini 1 MX Championship over Towers. Then in the Supermini 2 MX Championship, it was Minnesota’s Clough who won the overall with 1-1 moto finishes, topping KTM’s Mark Fineis’ 2-2, and Chilean visitor Benjamin Garib’s 1-3.

The KTM’s Orange Brigade standout Haiden Deegan was dominant in his 85cc classes in SX, winning four titles. But Deegan crashed out of motocross, leaving him unable to finish out the remainder of the week. That opened the door to several other fast young contenders like California’s Noah Viney, who topped the 85cc (12-13) Limited, and Indiana’s Mark Fineis, who took the MX overall in the 85cc (12-13) race over Yamaha-mounted Logan Best. KTM-mounted Fineis also ended up winning in the Mini Sr. 1 (12-14) class. And the first-place trophy in the Mini Sr. 2 class went to Georgia’s Trip Rexroat.

Seth Dennis, a KTM Orange Brigade rider who trains in Florida with former amateur racer Donald Solley, ended up winning the THOR Bronze Boot Award, which goes to the high points scorer in the Junior minicycle classes. He finished first in the MX portion of the 65cc (7-9) Limited and 65cc (7-9), and then landed second in the 65cc (7-11) class behind California’s Landen Gordon.

In the Vet classes the standout rider of the week was Michigan’s John Grewe, Kawasaki Team Green’s oldest racing member. The Michigan native won the Senior +40, Senior +45, and Senior +50 classes in MX. His only defeat came in the Vet +35, where Georgia’s Brad Smith got the better of him. The KTM-mounted Smith also won the Vet +30 division, as well as the Junior +25 in MX, though the overall Olympiad award went to Pennsylvania Suzuki rider Steve Roman.

And each year at the Mini O’s the Pro Circuit Platinum Pipe Award goes to the rider who accumulates the most points in the SX mains and MX overalls, and this year’s winner was Chase Stuckey of Georgia, who raced five different divisions. In the MX finals he finished second in four of his classes, and he ended up winning the whole Olympiad in 450 C and 450 C Limited. Stuckey also won the Golden Scott Goggle Award which is awarded to the rider in the B and C classes who accumulates the highest number of points combined.

Pennsylvania’s Derek Leatherman was also a standout in the C classes in the MX races, taking three different 250 C classes aboard his Suzuki RM-Z250. Leatherman also won the 250 C Junior (12-17) in SX, giving him four titles all together.