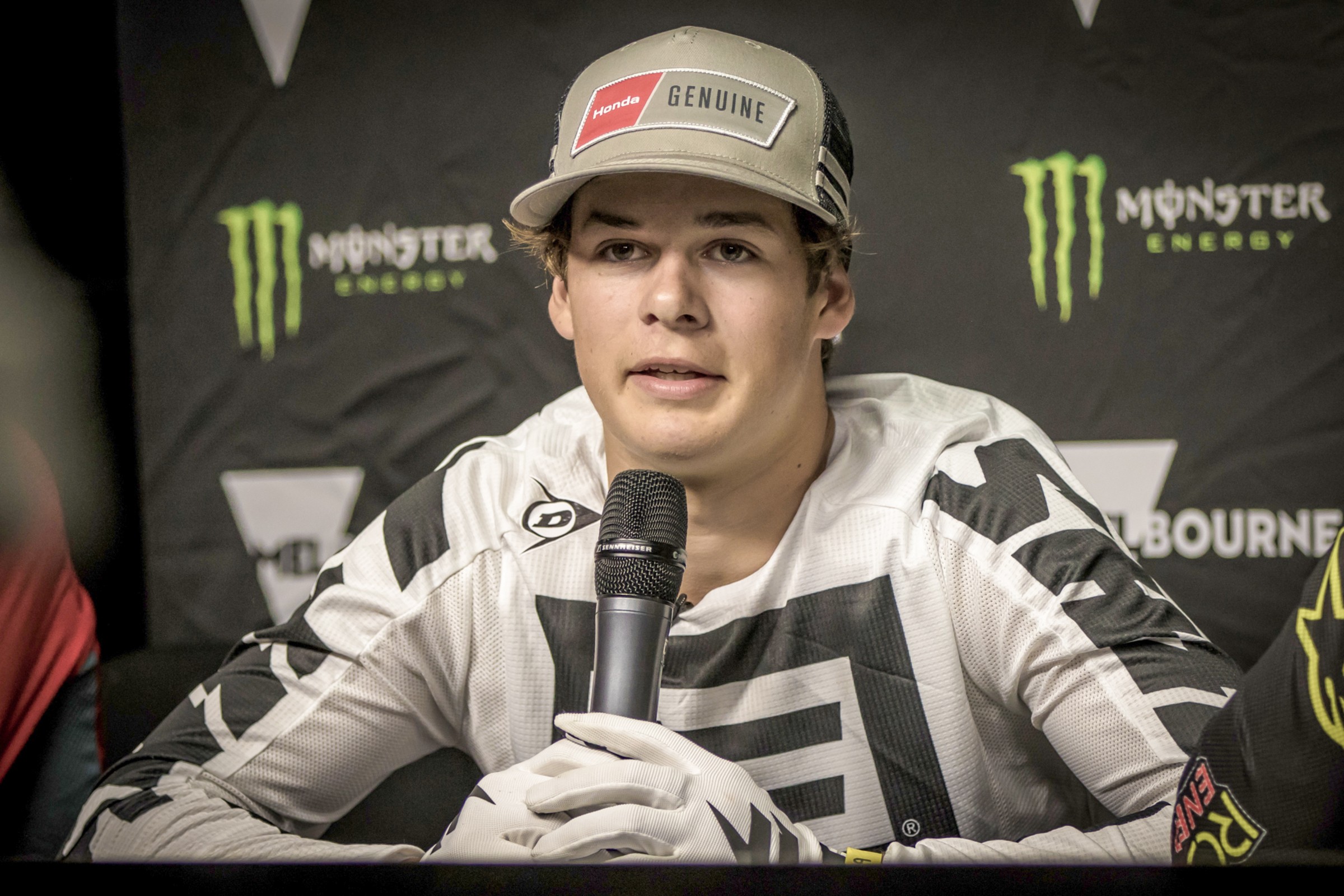 Over the weekend at the AUS-X Open in Melbourne, Australia, Chad Reed announced that the 2020 Monster Energy AMA Supercross Championship would be his last full-time championship season as a professional motocross racer.

That set a full-circle narrative in motion, as Aus-X also served as the professional supercross debut for 16-year-old Australian Jett Lawrence. Lawrence, of the GEICO Honda team, did race the final few rounds of Lucas Oil Pro Motocross, and also won the SX Futures race at the Monster Energy Cup. He has maintained that he has very little supercross experience, however.

Considering that, he rode well, showing sharp improvement in each race in the three-main format. He holeshot the first race and fought to hold off veteran Chris Blose for awhile, but eventually fell back to fourth behind Blose, Jay Wilson and race winner Mitchell Oldenburg. In the second race, he stayed in the fight even longer and carded third. He was even better in the final race, holding the lead nearly the entire way until a mistake in the final rhythm section opened the door for Oldenburg, who swooped in for a last-corner pass. Still, Lawrence carded fourth overall with his 4-3-2 scores and was happy to have battled with an established veteran like Oldenburg.

While the weekend led the 30 and older racers (and 26-year-old Jason Anderson) gave some perspective into racing at an older age. Jett, who posts and talks about donuts way more than a pro racer should, couldn’t relate. It was stark to see the 16-year old on the post-race presser stage next to veterans like Chad Reed and Justin Brayton.

Here’s what Jett had to say at the two following the race, which shows they have more of a connection than just being from the same country.

Racer X: Jett, what was it like racing in your first professional supercross race? It seemed like you got better in each of the three races. What was the experience like?
Jett Lawrence: I had a blast. It was so much fun racing with the big boys. It’s definitely a lot better than doing the amateurs. It was sick racing. I had sketchy moments. I was definitely the Ronnie Mac out there. It was insane. I think I was more scared than most of the guys that were either behind me or in front of me, basically. I’m just happy I didn’t really hit anyone when I was having those sketchy moments. I had a blast. The track was so fun. It was really technical, slippery. So it kind of made the passes a lot harder. So you had to stay on your mark a lot more. I think from what I started coming in thinking about, and leaving now, I think it’s definitely changed my mental a lot. Obviously, Mitchell Oldenburg, he’s one of the top five guys in America for supercross and that stuff. So I’m pretty pumped I was actually able to run up with him and battle with him. So I’m pretty pumped with that. Just to race with these big boys. Congrats to [Chris] Blose for the championship and just everyone for the good racing.

You’ve been riding at the test track, but how different was it actually being in a race, big crowd, battling other riders? How different was it from what you’ve been doing that last couple of months to prepare for it?
Definitely in practice there wasn’t as many sketchy moments. Basically when you pass someone or someone crashes, you can hear the crowd roaring. It was definitely a really sick feeling, I think. I was really happy that I was able to come and do this and kind of get the weight off my shoulders. Otherwise I think I would have been cracking myself a bit for A1, which is a pretty big race also. So this is really good to come do this in my home country also, kind of announce that. It’s definitely a whole lot different than practicing and then going to a race. Luckily, I’m more of a racer, so I kind of felt a little bit more confident coming into this. It’s definitely a whole lot different. I think I prefer the racing and practice.

Last thing, we’ve been making this connection all weekend. Your first pro race and Chad Reed is announcing it’s going to be his last year. But honestly, there’s 21 years between you guys. Have you even met much before this weekend?

Reed: No, we've met.
Lawrence: Yeah, I think the first time I actually met Chad was at Ottobiano. That day I actually won my first EMX race. I was 14. So that was pretty cool. I remember that. He actually messaged us when I won [my] 65 [race in] 2014 basically saying, “Get out of Australia” kind of thing, and “Go to Europe” and that. So big shout out to him. I never really would have thought that I’m making my pro debut as he’s announcing that he’s retiring. It’s sad to kind of see a great person leave this sport, and obviously for Australia he’s a really big person, like a legend kind of thing. I just got to think him a lot. To be honest, I wouldn’t really be where I am now without him. So for that message he did kind of changed my whole life in the sport and that stuff, so big shout out to him. It’s real sad to see a great go, but it’s their decision. Hopefully I can see him more at the races and that stuff.