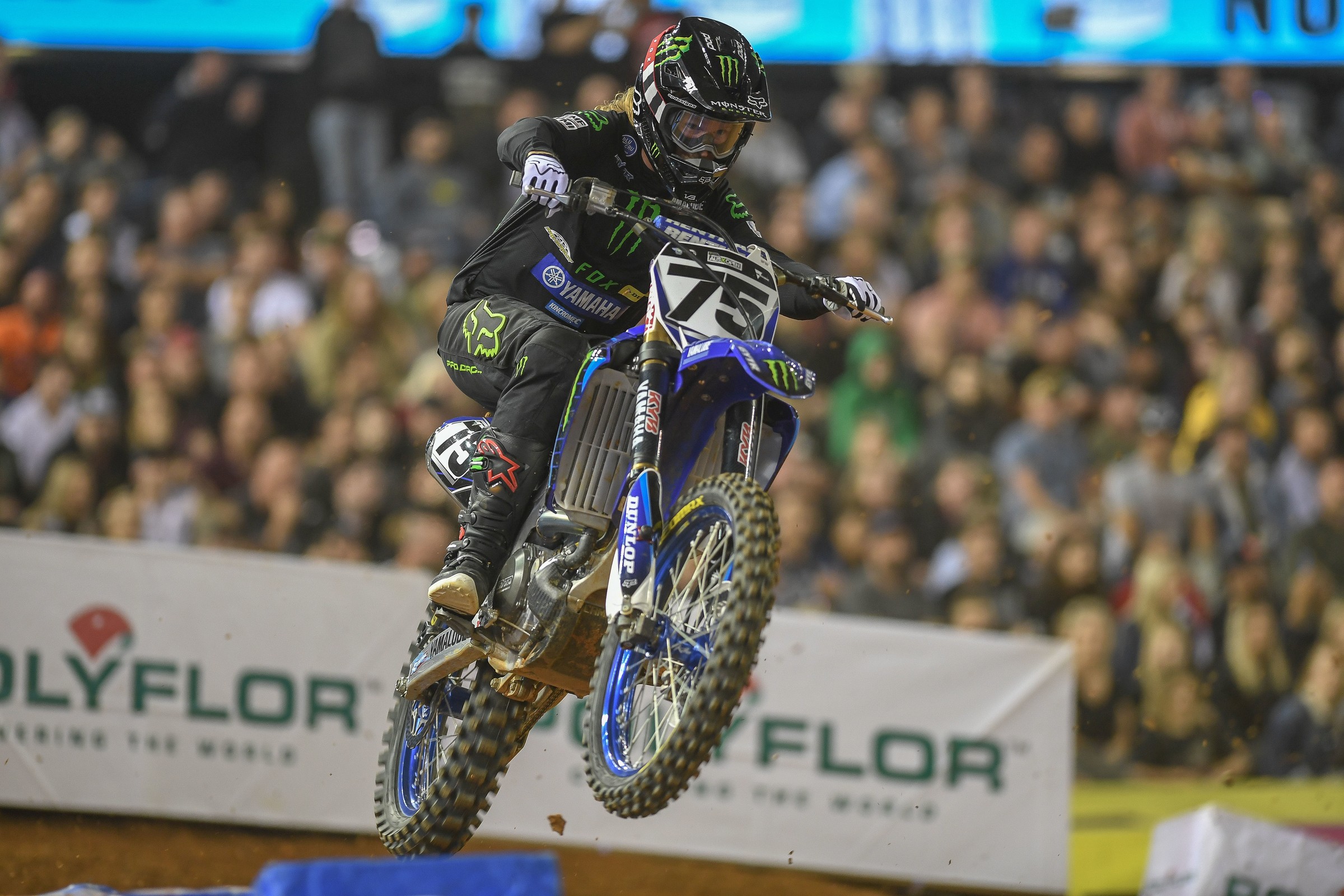 Between Jason Anderson and Josh Hill

Anderson holeshot the first main event but went down in a turn after a Chad Reed block pass. He remounted and finished seventh before winning the second and third main events. We caught up to Anderson following the last race of the evening.

Racer X: Jason Anderson, you’re the FIM Oceania Champion, but you did not defend the Monster Energy AUS-X Open race win from a year ago. Talk about how the night went. That first one was tough on you.
Jason Anderson: Yeah. The first race I got out to a start and then had a fall. I was able to come back up. Got up to seventh or something like that. Honestly the track was tough. If you weren’t up front, it was hard. Any time you’d try to get speed out of the track, it was so slick. I was able to win the second, too. All in all, I had a good time racing. I was able to get second tonight behind JB and get that Oceania championship. It was a good night. I had fun.

Josh Hill, who raced the final three rounds of the championship, finishing 3-4-2 for third overall. Hill finished eighth in the SX1 points standings. Hill attended the post-race press conference, where he told us of his plan to takeover the industry. Or maybe that was just the champagne talking…

Racer X: Same thing really for you, Josh Hill. At one point, you weren’t a racer. You’re back and you’re really fast. You had gotten on the podium here and you were in the mix the entire time. Take me through the night.
Josh Hill: Yeah, it was fun. The track was challenging. They couldn’t let a dozer on the stadium floor, so the dirt I think is amazing. They couldn’t break it up and chew it up and resurface it, so it just kept getting harder and harder and it was really slick. You had to take your time and kind of just be real smooth through it. But it was an awesome race. I think this is probably one of the coolest supercrosses I’ve ever seen this side of the globe, or pretty much anywhere other than the United States or Canada. It’s awesome. For me, it was killer to be here. It’s awesome to be back in the mix. It’s just the start of the Josh Hill world domination tour.

What is next on your agenda? We know what it is for most of these riders, but what is it for you?
I’m just going to take over slowly and slowly and just do cool stuff that nobody wants to do. Come in, show up, beat everybody at races and just mess around. I’m just kidding. I’m just happy to be here racing. It’s a blast. I drank a bottle of champagne after I got done. Haven’t drank in a while, so feeling loose.