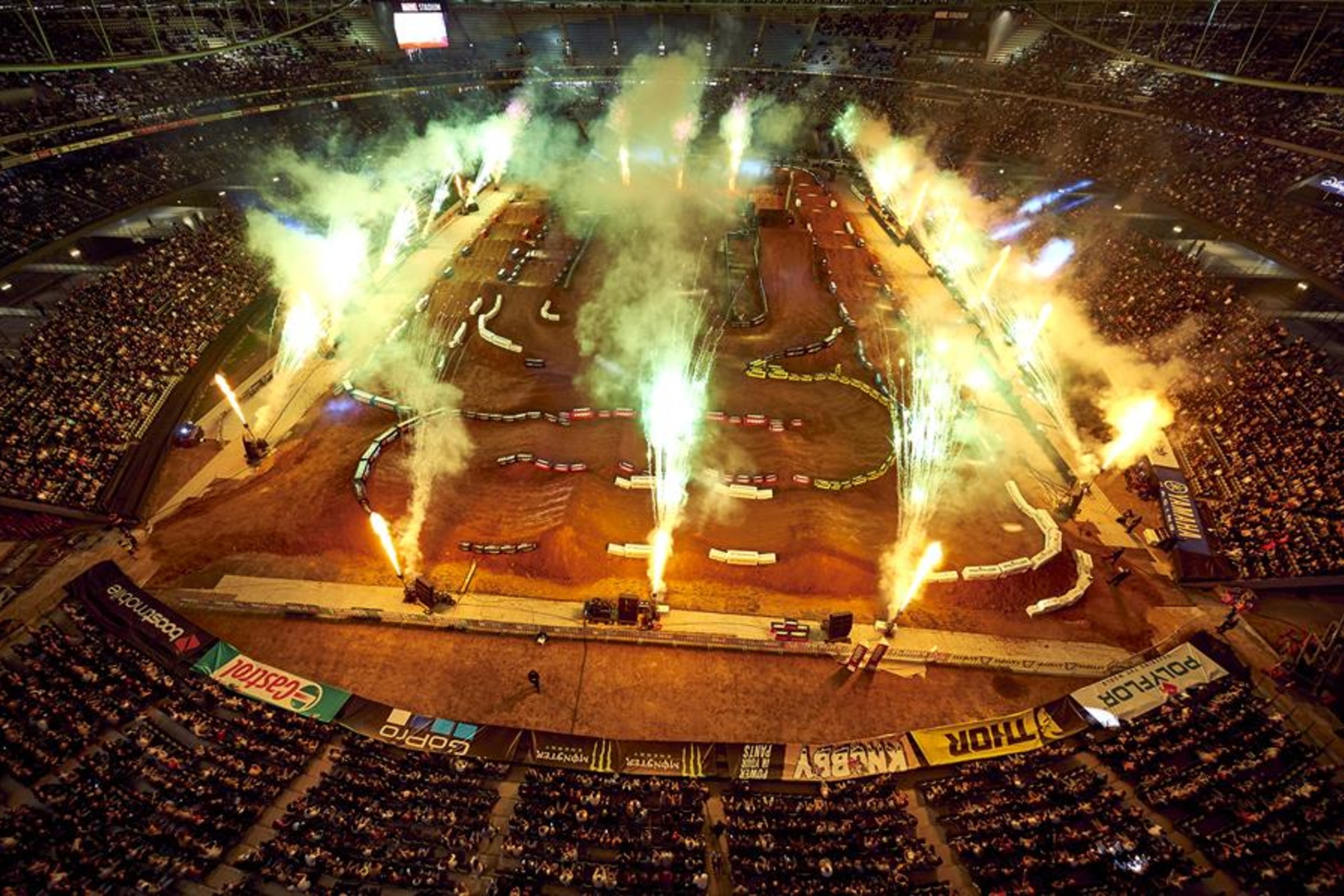 For Australian supercross fans, it was a dream to grow a race to the point where it could run inside the full-scale Marvel Stadium in Melbourne. The dream became reality in front of about 35,000 people on this night. Other wild visions became clear, also. Often, championship finales bring more hype than reality, as the mind wanders into wild scenarios that rarely ever actually happen. Not the case at this year’s Monster Energy AUS-X Open. Pretty much anything that could have happened did happen—which created a jam-packed night of action for those fans that supported the event.

First, a primer: AUS-X Open is both a big one-off international race kind of like the famous Paris Supercross, but it’s also the final round of the five-stop Australian Supercross Championship. Penrite Honda’s Justin Brayton had won the last three of those titles, but a practice crash and two broken ribs suffered a few weeks ago left him ready to book a plane flight back home to North Carolina. He couldn’t fly, though, with broken ribs, so he waited a few days and decided he might be able to manage the pain. He gutted out two races while CDR Monster Energy Yamaha’s Luke Clout rallied to take the points lead heading into AUS-X. Brayton was healed up, though, and said he relished coming into the race in attack mode instead of trying to protect a points lead. Brayton’s goal was to finally win the AUS-X race, which would also give him the title. The veteran executed the full plan and did just that, taking the overall with 1-2-3 scores in the three-race format. Clout, meanwhile, had a miserable night that started with an early crash and never really got back on track.

“I was definitely on a mission,” said Brayton. “The past two weeks I’ve been full on. It’s crazy because the past few years I came here with a pretty big points lead, but that’s tough, you want to not ride during the week and stay safe. Second in points, I just went full on the last two weeks. It feels so good. This is the best [title in Australia], by far. Luke and the Yamaha boys, every weekend I had to fend those guys off. I really want to thank the Australian fans, I love your country and I love what you’re all about.”

But if Brayton won, what happened to other big American names like Jason Anderson and Joey Savatgy? Savatgy, sadly, went down hard in practice and is suspected to have suffered a broken heel. That hurt, badly. Anderson, meanwhile, found himself in the lead immediately in the first race only to be passed and knocked down by Chad Reed! Yes, the stubborn 37-year-old Aussie, who used this race to announce the 2020 season will be his last, showed impressive form, holeshotting and leading his heat race, then mixing it up early in the first main with Brayton and Anderson. On the first lap, Reed got a drive through the whoops, put it on the inside of Anderson and the 2018 Monster Energy AMA Supercross Champion went down. Reed held the lead for a few laps before Brayton passed him to notch the race-one win. Anderson, on a twisted up bike, finished seventh. Anderson returned to win the final two races, but his 7-1-1 scores were topped by Brayton’s 1-2-3.

Anderson took second overall and also the FIM Oceania Supercross Championship, consisting of this race and the S-X Open in New Zealand two weeks ago (which Anderson won). He wasn’t mad about not winning the race, or the Reed knock down. Afterwards, the Rockstar Energy Racing Husqvarna rider explained that he’s learned a lot of perspective over the last year and tries to stay positive and have fun, win or lose.

As for Reed, he hung on for an impressive second in the first race. He went 2-7-5 for fifth overall, saying, “If people actually knew how little I’ve been on a motorcycle over the last few months they probably wouldn’t believe it.

“It’s been a lot of fun, but it’s hard knowing you’re going to the race with little to give,” said Reed. “Whatever little I have to give, I always tell myself coming into the race that I’m going to give it my all. I honestly just felt like I was breathing through a straw! I just had an amazing time out here, getting holeshots leading laps, I really didn’t expect that.”

Third overall went to CDR Monster Energy Yamaha’s Josh Hill, who was solid in all three races. That was good for his team, but the bad news was Clout’s night. He came into the race sporting a one-point lead on Brayton and tried to get inside of his title rival in the first lap of the first race. He washed the front end on the slippery dirt and crashed. When Anderson was knocked down by Reed, Clout got collected in that mess, too, putting him even further back. That sent his whole weekend off the rails, and he went 10-3-7 for a disappointing seventh overall.

There was just as much disappointment, and the inverse level of satisfaction, in the SX2 (250) class, which played out much like SX1. Young American Josh Osby had the points lead over veteran Chris Blose coming into the race, but Osby crashed several times throughout the three SX2 races, and also had bike problems in the last race. The Raceline KTM rider’s 5-4-12 results left him fifth overall, opening the door for Blose, who was rock solid, saying he felt zero nerves all day. Blose, saying years of championship battles in American arenacross might have helped him, went 2-1-4 to capture second overall and the title.

“Oh man it feels so good, the whole team has been working so hard lately,” said Blose. “We came into this with the mindset of winning—we accomplished our goals. I’m so pumped right now, I’m almost speechless, I can’t believe this right now. Let me tell you, these short races are hectic. I knew where I was in the standings and where my competitors were, and once I got off to a good start in the third main event, I knew where everyone was, so I let the boys go and fight for it. We didn’t win the battle but we won the war.”

That gives Penrite Honda both the SX1 and SX2 crowns, plus both race wins. Blose’s teammate Mitch Oldenburg rode brilliantly, battling back from several early first-turn mashups to go 1-5-1 for the overall. He passed young Australian Jett Lawrence on the final lap of the last race to seal the win.

“Yeah it was a tough way to go, I got caught up in the first turn again and I had to just keep digging deep, keep pouding the rock,” said Oldenburg. “I’ve been working with a mental coach to help me get my head right, and it feels great.”

Lawrence’s professional supercross debut was solid, he led early in the first race before Blose and Oldenburg got him, then ran up front again in the second and third races. His 4-3-2 scores illustrate how much he improved in each race. Last year’s SX2 Champion, Yamalube Yamaha’s Jay Wilson, was third overall on the night with 3-2-3 scores.