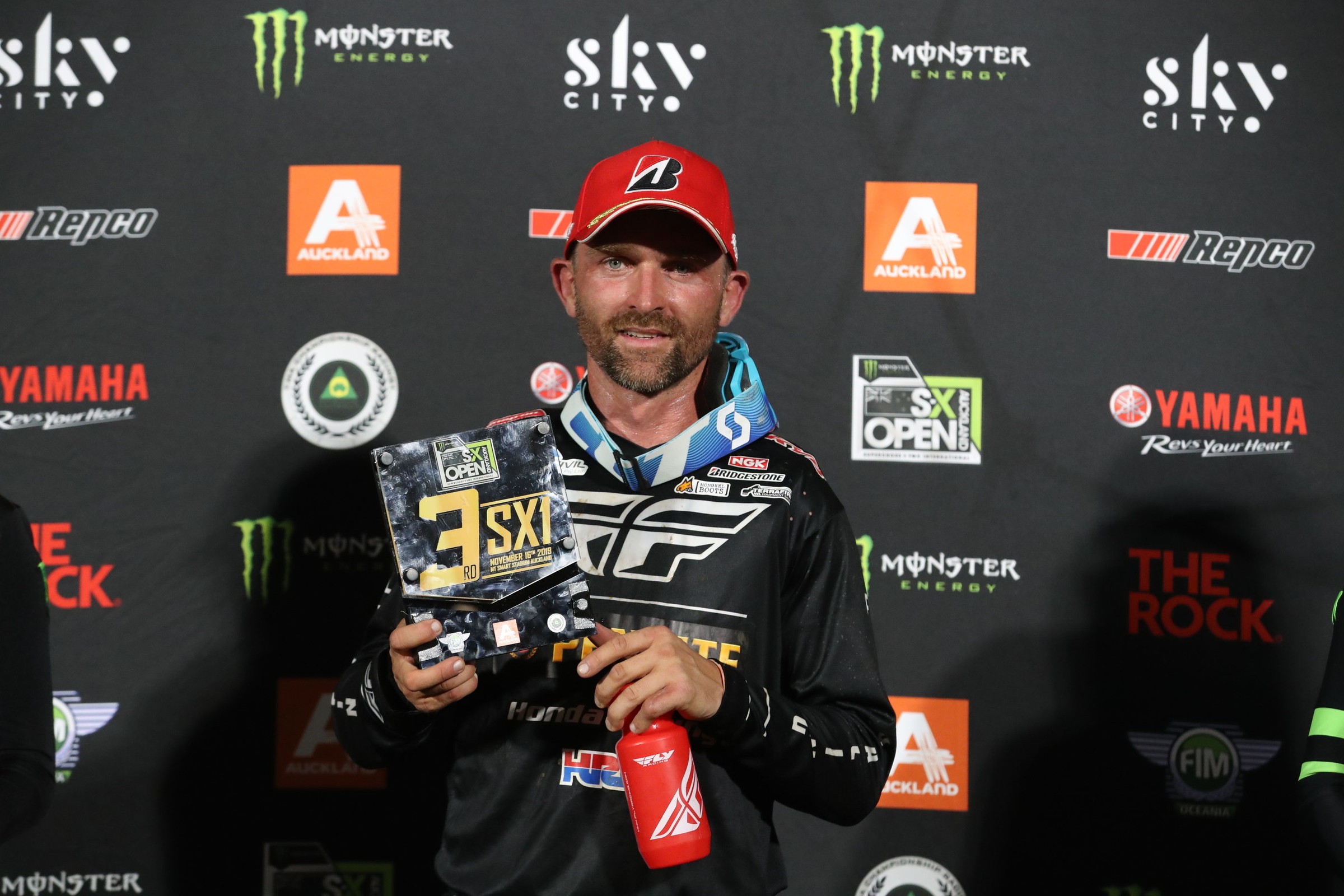 The Monster Energy S-X Open in Auckland, New Zealand, marks a series within a series. There’s a two-round FIM Oceania Championship taking place here and at the AUS-X Open in Melbourne, Australia, in two weeks, but the two events are also part of the five-round Australian Supercross Championship. In that championship, CDR Monster Energy Yamaha’s Luke Clout is putting heavy pressure on three-time and defending champion, Penrite Honda’s Justin Brayton. Clout won the previous round of the series in Wollongong, Australia, and then took second to Jason Anderson here in New Zealand to move into the points lead (by a single point) with one race to go.

Clout, an Australian, also has some plans to try his hand in America in 2020.

Brett Metcalfe knows what that’s all about, as he was a familiar face in the AMA ranks for over a decade. Now he’s back Down Under racing for the Penrite Honda team as Brayton’s teammate. He rode well in New Zealand to take third overall behind Anderson and Clout.

With a race in New Zealand, it was key to get some Kiwi talent in the ranks, and so Cody Cooper, familiar to American fans as a consistent runner in the Lucas Oil AMA Pro Motocross Championship, decided to do some supercross racing. He went 13-15-10 for 14th overall but served up some cheers when he actually beat Anderson in his section of the ANZAC versus Team USA showdown race. Perhaps Anderson was playing around a bit?

Clout, Cooper, and Metcalfe all attended the post-race press conference.

Racer X: Luke, second in the race but now taking over the points lead. You had some deep thoughts there on the podium saying how difficult your career got at one point, and now you’re back. Give me some of the backstory. You won last week and finished second to Anderson to get the points lead this week.
Luke Clout: Just a lot of injuries. I did basically two things in a row, and concussions. There was probably a good three or four years there that everything I did just kind of didn’t go right, with teams that were folding. Everything I did just kind of didn’t go right. Luckily I kind of just rebuilt and I stuck in there. There were times that I was like, I don’t even want to do this anymore. I rode last year on a great team. I was lucky enough to get picked up by CDR Yamaha. Really gelling with the team, really gelling with the bike. The rest is history.

How much determination did you have coming into this one? You had said on the podium your goal was to beat everybody but Jason Anderson, and that would put you in the points lead. So it seemed like you were fired up for this.
Yeah. I work really hard, on and off the bike. You don’t really know how you’re going to stack up the American guys because you just watch them on TV, you watch them on Instagram and you see how good they’re riding. So you kind of just base your stuff off that and hope you can do well. I’m just kind of confident in my ability. I think that’s a big thing. My mental aspect is a lot better now. I said to my family, we sat down at the dinner table Tuesday on my birthday and I was like, “If I can get second to Jason, that’s awesome.” He’s the only guy that I wanted to [get] beat [by]. I’ve done that. To be leading the championship, I wanted that to happen but I didn’t know if it would.

You said you’ve got some plans to maybe come to America?
It’s a little hush-hush, but there is some stuff in the works at the moment. You should see me there in the first six rounds or so. The details are a bit confidential at the moment. I can’t wait to get over there. I really think that I can do some good things. So, I’m excited.

The racing was crazy. The battles were so good, and the Joker Lane [shortcut] strategy you decided to use. Tell me how that all played out.
Yeah It was crazy. I saw Josh [Hill] use it, and then we kind of started catching him. I was like, he’s fading. I’m in second, so I need to win a race here. Then I did the Joker Lane and kind of thought, “I’ve got this in the bag.” Then I looked somewhere behind me and I saw Jason like right on my fender! I’m like, “Oh my god. This is going to be the longest 30 seconds of my life!” I just timed it really well, got a win. It’s cool to get a race win. That Joker Lane was insane. I couldn’t believe it. Even in the third race, I think I was in third and then went back to seventh because there was just so many people taking it. I was like, who are these guys? Nearly actually went down in there, almost landed on someone in one of the rhythms. But all in all, for the fans it would have been unreal. So I’m stoked.

Racer X: Coop, you put it to Anderson!
Cody Cooper: [Laughs] I had a fun time in the end. Qualifying I was going to pull a hammy. I was a bit out of my league, I think. I ended up having a good time. I think Anderson was just playing a bit with me there, but I’ll take it.

What was the crowd like here? Being a Kiwi and having an event like this?
It was awesome for me. It was good to have a Kiwi out here, I guess, circulating. Like I said, I sort of found my flow in the first moto. Then I had to have a recovery run in the second one. It was good. I really enjoyed it.

I noticed you kept using the outside gate. During the heat race you were about six gates wider than anybody else. Was that because you didn’t want to be near anymore, or was that actually a secret gate?
I just wanted to be by myself [Laughs]. No, I actually tried to make it work, really but I don't think it really worked in the heat race. But once it got tacky it was good. Pulled a couple of holeshots.

So in the U.S. versus Down Under race, Carmichael knocked Townley down. Did you try to fight RC after that? He took you guys out. That’s really dirty, man. Were you guys super angry about this?
[Laughs] No. I think there’s still one more race tonight! [Note: we presume Cody is referring to the afterparty.]

Overall, it was awesome?
Yeah, it was awesome. Had a ball. Don’t know if I’ll do it again but it was great to be out there instead of watching from the stands.

Racer X: Brett Metcalfe, the starts were super dialed tonight. Where did that come from?
Brett Metcalfe: I don't know. Actually, I’ve got to thank Cody because he told me about gate 19 down there on the outside. He was like, “Dude, if you want it you can take it.” I had seventh gate pick, so I saw everyone else pick their spots and I’m like, “I’ve got this gate with traction, or I’ve got gate 19 with traction.” My starts have been struggling lately, actually, with a lot of wheel spin. I don't know why. If I got traction, I can get good starts. If I don’t have grip, then I’m screwed. So I took the risk. It was a gamble, but it paid off.

Talk about the racing. You were in the hunt the whole time. Almost won that first one. What was it like?
It was good. The first round this series started out good for me. Then I had a big crash. It just kind of took the wind out of my sails a bit. So it’s nice. Body’s feeling better and feeling good. Having some good rides. It was fun. I spent a lot of time in the States and that first race when I was leading and Jason came by me, just to get that smell of that race gas… It took me back to AMA days! I don’t know what it was, you can just tell the smell of the KTM and Husqvarna bikes, it must be the fuel. I’m like, this is good, riding with one of the best guys in the world right now. This is awesome. I was having fun. Then I started really sucking wind. I was like, it’s starting to hurt. But I was just having a good time. I was struggling a little bit in the whoops and lost a couple spots there. Luke’s [Clout] riding great this year. The competition is deep here, especially with the injection of Jason [Anderson] and Joey [Savatgy] and Chad Reed. So it’s just good fun and it’s good vibes riding at the front.