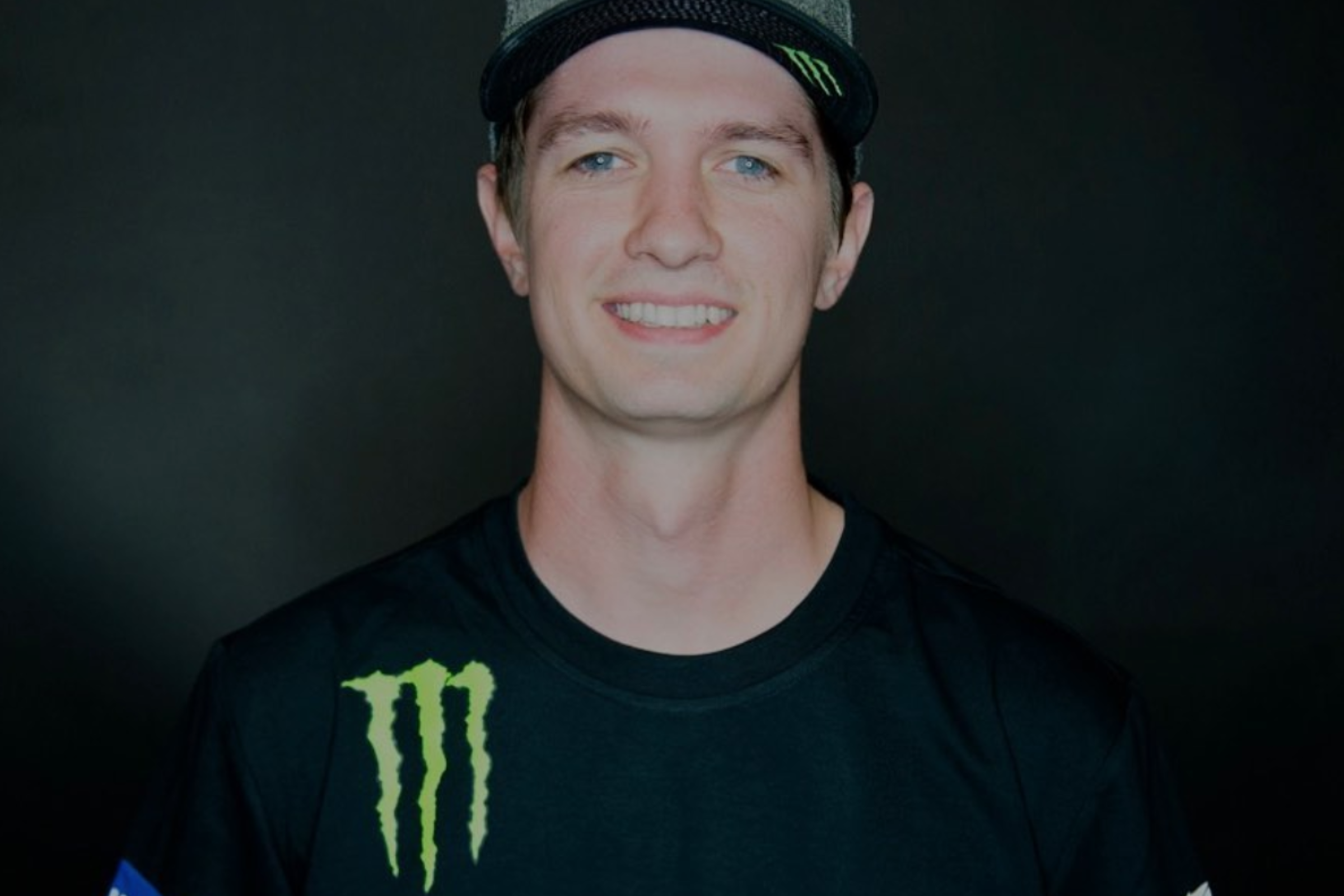 After a star-crossed 2019 AMA Pro Racing season where anything that could possibly go wrong, did go wrong, 2018 Federation Internationale de Motocyclisme Motocross World Championship contender Thomas Covington is poised to head right on back to the Old World of motocross come 2020. Now signed-up to make a run at the 2020 450cc-based MXGP world title for the Gebben Van Venrooy Yamaha outfit, the American is on a mission. How do we know all this? Well, Racer X just ran into the young man out of Vernon, Alabama out at blindingly bright and hot Glen Helen Raceway in Cosmopolitan San Bernardino, California.

“I had a crappy day riding out there,” said a mildly amused Covington, wondering what the rest of the day would hold. “I went out and warmed-up and came back in and topped my gas tank up with gas before my first moto. My bike tipped over and I broke my front lever off. I didn’t have a spare one with me, so we zip-tied and taped a little wrench onto the bike. I was able to finish my moto and I was stoked.”

A mere 24 hours before, word had broken that the American would return back to his former haunts of European-based Grand Prix Motocross to contend for the 2020 FIM Motocross World Championship. Almost immediately, motocross fans the world over (Read: Europe and the USA) reacted to the news, most of the feedback and input emanating from it all swinging very much in the favor of Covington’s Grand Prix decision. From all this conjecture and out-and-out wondering, comes the reach for the dog-eared notebook and the pressing of the forefinger on play of my well-worn SONY recorder and the reach out to Thomas Covington. Hey!

Racer X: Thomas, what’s happening and what in the world are you doing out here at Glen Helen Raceway this second week of November 2019?
Thomas Covington: I’ve been good. I’m just out here in California right now getting used to the new Yamaha 450. Yeah, and obviously, I’ve just done a deal with the Gebben Van Venrooy Yamaha to race MXGP next year. I’m just out here at Glen Helen getting used to the bike and trying to get comfortable on the 450.

To that end, just yesterday word came down you were going to return to the European-based MXGP World Championship circuit. Fans on both sides of the Atlantic Ocean have lit the internet up the past 24 hours weighing in on it all. Pretty cool, huh?
Yeah, it was really cool. I mean after the year that I’ve had, I had a lot of people come up to me and ask me if I was even racing next year. It was cool to see everybody supporting me and being excited about me coming back to the GPs in 2020. I think it’s cool to see that the fans are still pulling for me and rooting for me to represent the U.S. over there in MXGP.

Super excited to announce I’ll be riding for @gebbenvanvenrooyracing @yamaharacingcomofficial next season in MXGP! Really enjoying training on the bike out here in California before heading over to Belgium to test soon. See y’all at the races! ?

@bigairtom doing what it takes to finish a practice day. The ole wrench front brake lever! Love the electrical tape too! @monsterenergy @yamaharacing

Yes, there are more than a few racing insiders both in America and in Europe who may have thought it better that you would have remained in Europe and racing the World Championship this past year. Thoughts?
Yeah, I know. In hindsight I might have been better off to stay and do my last year in MX2 over there, but you live and learn. I wouldn’t take away all the experience I gathered there here anyway. I learned a ton and I think that sometimes you learn more in your failures than you do your victories. Yeah, I think this year I just learned a ton about myself and I appreciate the opportunity Bobby Hewitt’s team gave me. They did everything they could to make it go as smoothly as possible for me in the U.S., but some things just weren’t meant to be. I’m really thankful for this opportunity with Yamaha because a 450 ride in Europe is tough to get right now. There are not that many spots and with a calendar that big, it costs teams a lot of money to have a lot of riders. Those spots in the premier class are really sought after, so I’m just super-thankful for the opportunity and hopefully I can make them proud.

How did the Yamaha MXGP opportunity present itself to you? Furthermore, did it take a while to connect the dots and string the entire program together?
Yeah, it took a while to kind of get everything solidified. A few months ago, Husqvarna and I decided that we’d part ways for next year. It was a mutual agreement. From there, I started putting feelers out there over in MXGP to see if there were any spots still left available this late in the year. Yamaha, they seemed really interested in me. They seemed really motivated to find me a spot with Yamaha somewhere. That was really cool. They saw how much success I had in the MX2 class and I guess they still believe that I can reach those kinds of results. That was good to see. It slowly but surely all came together and I’m really stoked about it.

Okay, I had to catch up to it all a bit, but apparently the Gebben Van Venrooy racing organization is relatively new and has not really worked with a world class, title contending racer before. Still, Yamaha chose to bolster up and support the team for 2020. Just how do you see it all?
Yeah, I never actually met the guys personally; I didn’t really have a relationship beforehand, but I’ve always heard really good things about the guys. They’re just good people and they run a solid program. They know what they’re doing and I think that with the support of Yamaha behind them, they’re going to do even better.

Hey, I know it’s very early on, but what do you think about riding the Yamaha 450?
I spent four and a half years on the Husqvarna, so I’ve gotten pretty used to it. But honestly, from the first day on the Yamaha 450, I was just comfortable from the first lap. I think from the past number of years from my career, I grew up riding Kawasaki 250s and then when I went to Husqvarna I was kind of searching for that certain feel – maybe more like the way a Japanese bike handled. I was real comfortable with that; that’s just what I grew up riding in my backyard every day. I was constantly searching for that at Husqvarna. As soon as I got on the Yamaha, it was a breath of fresh air. It was like, “This is what I was looking for.” That was really nice. It just handles really well and, obviously, the power is nice. With the Yamaha, it just turns really nicely. I just come into the turns and lay the bike over and it follows through like it is supposed to. I’m really excited with how the Yamaha handles. The last couple of weeks I’ve just been riding a completely standard bike and I was comfortable on it right away. I was comfortable on it already, which I was really surprised about because I had not ridden a completely standard bike in a long time. I’m really excited to go back to Europe and test with the team and get it dialed-in even more. I think we can make it all work really well.

What’s your off-season plan?
Well, basically, I’ve already started my off-season prep. Due to the Epstein - Barr virus I came down with, the doctor didn’t want me to do anything at all and told me to [rest] if I wanted to recover from the illness. About three weeks ago I started back up on my training program with Joel Roelants. He’s based in Belgium and has been my trainer for years. He’s helped me slowly build myself back up to where I’ve been back on the bike the last couple week. Everything has gone really well so far and I’ve been making the progress that I’d expect to see and I feel good. That’s real good news. As far as my plans go, I plan to stay out in California until Christmas. After Christmas, I’ll fly over to Europe and get down to testing and last minute training. I’ll probably do a handful of international races like the Hawkstone International or the Italian Championship before the season starts. Then we go racing in March in England. It all comes quick, so we’re trying to get a head start on it.

Hey, I’ve known you since you were an 85cc rider. What did you make of racing in the United States for a solid year? How different was it from your Grand Prix way of racing life?
It was totally different and I actually enjoyed it. The supercross atmosphere and the crowd and everything, it’s awesome. It definitely was a good experience for me to have. It didn’t go as well as I would have liked it to, but I’m still glad I did it, you know? If I would not have come back to try racing in America, I would have always regretted it. I’m glad that I came over and tried it and you never know what can happen in the future. All in all, it was a good experience here in America. And with the outdoors here in the U.S., I’m more borderline depressed that I missed the majority of the outdoors due to the sickness. I was so excited to do the outdoors that I kind of ran myself into the ground. I was so excited and ready to race. I was training my butt off and I wanted to win that thing. As far as the atmosphere and things like that with the outdoors in America, I really enjoyed it. The tracks and everything were really good. It’s definitely different. We can say that.

So what are you hearing? Are people inside the sport and people you are close to applauding your move?
With the year that I’ve had, it can only go up from here. Everybody has been super-encouraging and wanting me to do well. I think people are just excited to have somebody to watch racing over there in MXGP – especially in the premiere class. It’s going to take a lot of work because the MXGP class is so stacked. I’d say the top 15 guys are all really good riders. I’m definitely going to have to work hard and find something special to find some good results. I just want to get the bike dialed-in and get myself dialed-in and just start from there and I can learn how to hang with them.