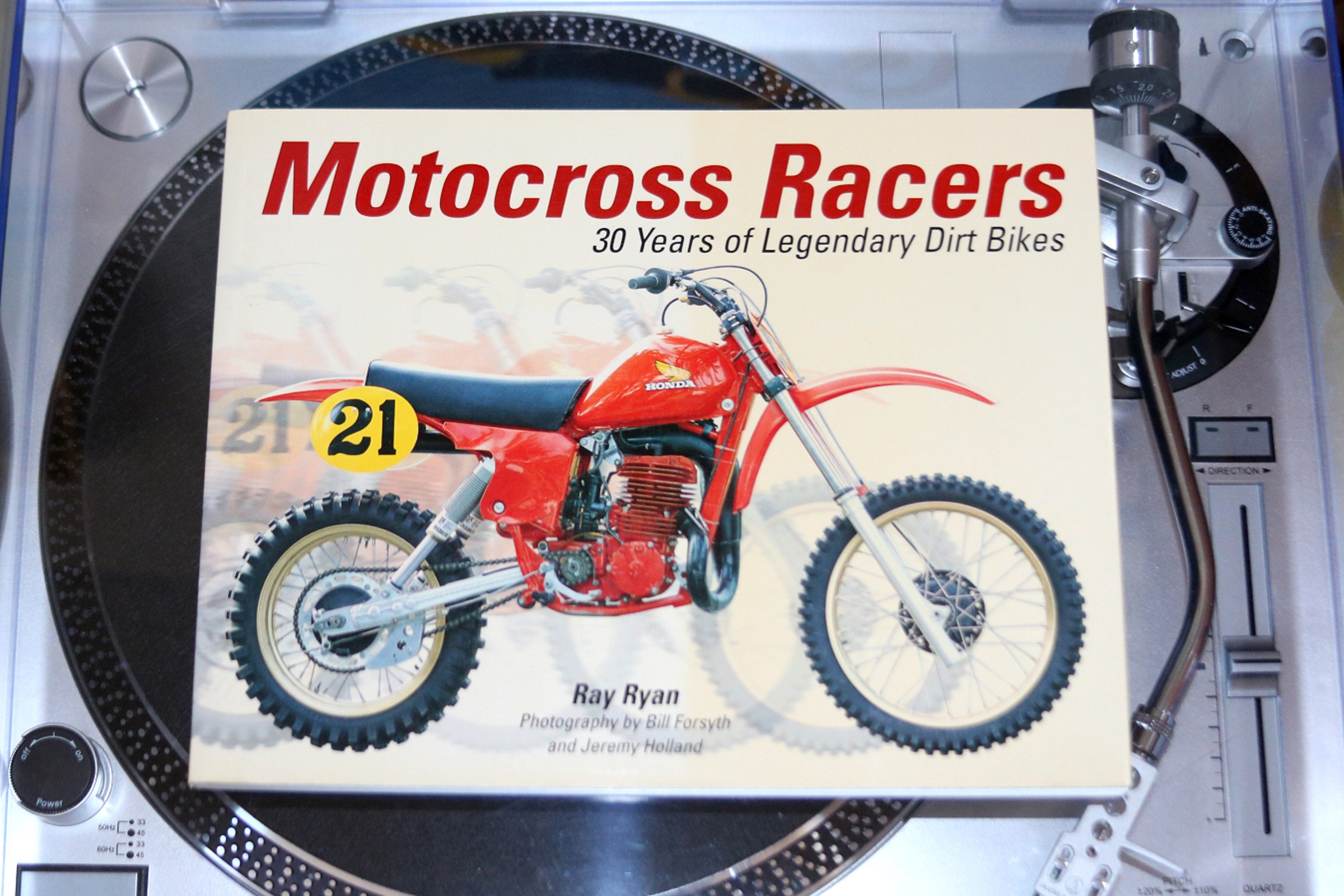 A few weeks back we ran a list of the best books about motocross we had here in the Racer X office. We received a lot of feedback from folks who either had some of the books or wanted to know where to find them. We also had readers like Reese Dengler send us a list of their own motocross books that we didn't have! So here's Part 2 of the best motocross books for you to look for during the off-season. If you missed part one, make sure to check it out as well!

I just learned about another motocross book. A WILD RIDE, an autobiography by Bryan Wade.  I have not yet decided if I will get this yet but it can be gotten from Nicholson Motors at www.nicholsonmotors.com.

The new biography of Jeff Smith by Ian Berry is fantastic. I just got my copy a few weeks ago. It weighs a ton. I’ve only gotten about ¼ of the way through the book so far, just looking at the pictures first then I will read it. You can purchase A Wild Ride now on Motosportx.com.

The Pavel Husak motocross book highlights the development of motocross motorcycles from the late 1940s onward. The edition I have was published in 1986. Unfortunately this book was never published in English that I know of. I have a German edition and I’m sure there were Czech and French editions. Pavel Husak was the chief design engineer for the Jawa Race shop/division. He was responsible for the design of the early Jawa motocross bikes and ISDT motorcycles, (maybe road race bikes also). I think he might have also had a position with the FIM at one point.

Motocross the Big Leap by Frank Melling. Reese has one with a different cover

How to Ride and Win by Chuck Minert, John McLaughlin, Don Pink, and Bud Ekins.

Ride It, the Complete Book of Motocross by Frank Melling

World Cross was a series of motocross books put out annually in Italy from first Gianni Prandi and then the Marini brothers, Mario and Sergio. The books are masterpieces of Grand Prix photography from the era of Eric Geboers, Georges Jobe, Jean-Michel Bayle, Allesandro Puzar, and Stefan Everts, as well as the ‘80s era of AMA stars like Ricky Johnson, Jeff Ward, Micky Dymond, and more. The books are hard to find here in the States, but if you ever spot one in a thrift store or rare book shop, grab it!

Supercross Unleashed: The Joy of SX was produced by our own Simon Cudby and Billy Ursic, with a foreword written by David Pingree. It's a broad snapshot of SX/MX in the mid-00s and features Cudby's photography and Ursic's descriptions of what motocross is, who the big stars were at the time, as well as some rising amateur stars (a young Ryan Villopoto, Justin Barcia, Zach Osborne are all featured).

One book that belongs in every motocrosser's library is Gary Bailey's How to Win Motocross book, the bible of seventies' motocross technique, style and strategy, featuring photos of Gary and a young David Bailey showing you how to ride aboard their Bultaco Pursangs. (On a personal note, having gone to a couple Gary Bailey Motocross Schools where David was there helping it, this book has a whole bunch of great memories for me.)

People have asked me about Motorcycling by Charles Coombs and whether or not he is a relative. Well, we have no idea who Charles is, but his book is a ‘70s gem.

The year 1992 was a banner year for books as both Supercross '92 and Motocross Yearly '92 came out. SX '92 was made by Champs Marketing, the same Ohio-based company behind Rad-N-Bad posters and the Hi-Flyer trading cards. Most of the photography is by John Valdez. He also had a hand in MX Yearly '92, along with John Raymond and Mike Snyder, which covered all 12 AMA Nationals that year, as well as the last 250cc USGP at Unadilla and the '92 Motocross des Nations in Australia. Both books are full of fantastic photography and well worth the search, if you can find them!

Marvin Musquin is the title and topic of a book by Stanley Leroux, written in both French and English. It's about Marvin's pre-U.S. days as the 2009-2010 FIM World Motocross Champion in MX2, but it avoids one rather large topic: Musquin switched from a Honda to KTM in the middle of the '09 season, and it triggered a very turbulent court battle that saw Marvin actually sit out a round while leading in points, as a way to get out of his deal with a small French Honda team in order to sign with Red Bull KTM. In fact, the book starts on May 31 of 2009, his first race with KTM. No matter, the photos are excellent, including a fashion shoot by Gary Freeman, and if you're a fan of #25, this book is a must-have.

Marvin has had a more recent book cover via Pierrick Paget's Marvin Musquin Presents Motocross: Today's Riding Style Guide. Paget is a former racer so he knows his stuff from a technique standpoint, and this book focuses on today's fastest riders in both Europe and the U.S. Marvin is a focal point, because Paget believes his technique is perhaps the most refined of anyone in today's racing. It's a good look at a lot of today's riders, though, and it appears you can still order Paget's books at www.motocrossbook.com/

Off Road Motor Cycle Sport by Graham Forsdyke is a British book from the ‘70s with some amazing photography of the Grand Prix heroes of the day: Roger DeCoster, Heikki Mikkola, Adolf Weil, and more. It's something of a middle-school library book, but the cover jacket alone featuring The Man on what looks like Donnington Park at the 1973 Trophee Des Nations, is worth whatever the cover price is! (It was 2.50 Pounds when it came out in 1974.)

L'Album Moto Cross is a photo book from the 1980s and 1990s by Jean Bougie and Michel Moncler. It doesn't have a lot of words but the photos are a diverse collection from Grand Prix Motocross, with Greg Albertyn on the cover.

Albertyn's primary rival in Europe was Stefan Everts, the King of Grand Prix Motocross. His book Stefun's World is a wonderful collection of photos and memories of Stefan's young life, all the way up the late ‘90s and the midway point to his masterpiece of a career.

Images Du Motocross is another excellent French photo book, by the legendary journalist and photographer Pat Boulland, who was so influential in the young Jean-Michel Bayle's career that JMB wore "PAT" on the top of his helmet to thank him for his support in wanting to come to America in 1989.

British motocross riders have had a good run of autobiographical books, including Kurt Nicoll, James Dobb, and Geoff Smith, as well as this rare one that Reese Dengler has of ‘60s star Brian Wade. There's also the one coming to market early next year by Racer X contributor Rob Andrews.

Our buddy "Dangerous" Joe Bonnello put together Supercross, s book featuring SX/MX in 1997, and it's just a loose collection of some of Joe's excellent photography over the 20 years preceding the publish date. You can purchase Supercross by Bonnello on Amazon.

Hurricane: The Bob Hannah Story, is a long look at the legend by friend and fan Tom Madigan. The photos are excellent and they cover Bob's epic career, from his early days as a desert grom to his post-motocross days flying airplanes. It's a must-have for any motocross library! There's currently one available on Amazon.

Champions Du Monde is a French book by our friends at Moto Verte and MX Magazine about the first four Frenchmen to earn FIM Motocross World Championship titles: Jacky Vimond, Jean-Michel Bayle, Sebastien Tortelli, and Frederic Bolley. It's an ode to French motocross and the photos are fantastic.

Supercross by Stephan Legrand is another French book, though it's a look at American supercross. The photos are excellent but it's written in French (LeBig told us an English version might be in the works). If you live in France, you'll want this book in your collection. You can purchase Supercross by Legrand here.

Here's some others we enjoy as well: