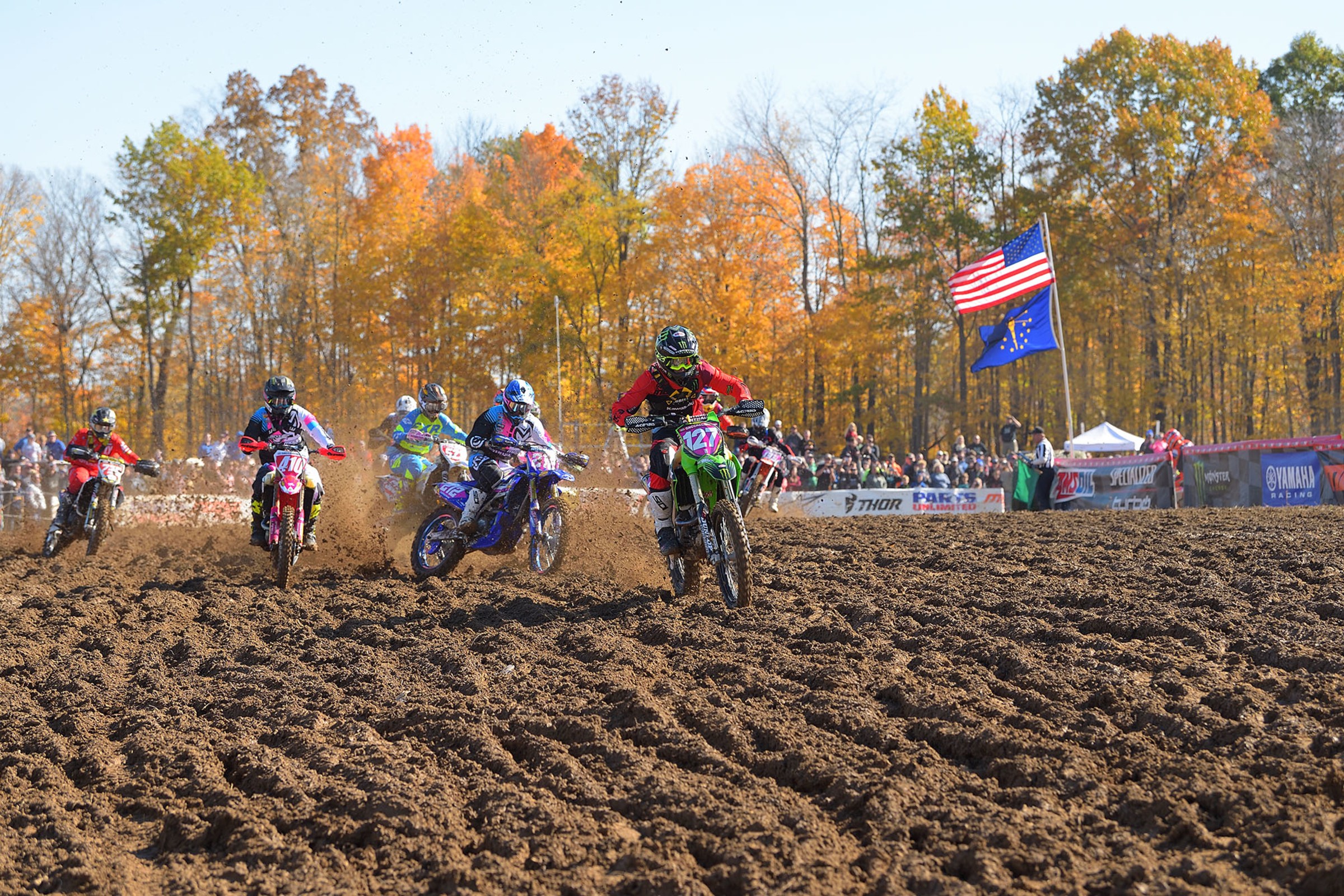 GNCC Report 4 Things We Learned at the Ironman GNCC

The final round of the 2019 Amsoil Grand National Cross Country (GNCC) Series traditionally sees a huge turnout of racers and spectators alike ready to take on the Ironman GNCC. This year would see an additional factor as long periods of rain during Saturday’s ATV race left the course rugged, rutted and muddy. Heavy winds Saturday night and a bit of sun through the day on Sunday would make for pretty great conditions on the majority of the track by the afternoon pro bike race, but some spots remained wet, sloppy, and slick. These conditions helped to make yet another entertaining race, here’s what we learned.

As mentioned, a steady rainfall throughout the day Saturday saturated the racecourse for the ATV event. Tons of standing water would leave the ATV pilots with one of the most challenging events of the season, and the gently rolling hills, and big steep banks that litter the Ironman course would remain hard packed, slick and difficult to make throughout the entire ATV race. These slick conditions would continue early Sunday, but the GNCC track crew salvaged what they could.  They rerouted several sections of trail, ran the little Sutter Trail Dozers on areas of the course and added in two additional “bike only” sections.

Thanks in part to periods of sun on Sunday, the course really began to come around and areas of the PM bike racecourse would be absolutely epic as the racers took to the track. However, mud was still a factor, as some areas remained wet and challenging. You would ride one section of trail that seemed absolutely perfect, and then come to a section that was slick, greasy and made you feel like you were riding on a sheet of ice. That slick stuff would then give way back to beautiful loamy dirt before finding some deep mud once again.

Arguably the most challenging section of the track would be one simple uphill section just behind the motocross starting gate. It just happens that these two hills, one “hard way” and one “easy path” sat at the bottom of a valley where all of Saturday’s rain began to collect. It resulted in this deep, sloppy mud that would rob traction at the base of the hillclimb. Even the easy path, which is just a gentle incline, became incredibly difficult to make without a bit of assistance. Once you made it past that hill, you were in for miles and miles of beautiful trail and epic conditions before finding some slick and sloppy areas once again. It made for a hectic day!

In case you’ve been living under a rock, or aren’t an avid follower of the GNCC series, Ben Kelley put together one of the most impressive seasons in 2019. He would claim ten wins through the first ten rounds in the XC2 class for 250s, before making the move to the XC1 class with three rounds remaining. His XC1 debut at the Mason-Dixon GNCC was plagued with issues due to the dust (along with many other racers!) but he bounced back from that with the overall win in the previous round, and would back that up with the Ironman GNCC win as well.

It gets more intriguing. Both Kailub Russell and Thad Duvall, who are easily the two winningest GNCC racers over the last few seasons, were out for the Ironman finale. DuVall also missed the previous race, and Russell didn't finish that one with a sore shoulder. Now Kelley has two wins, establishing himself as a rider who could be the biggest threat for race wins in the 2020 season. Steward Baylor has played spoiler to the Russell and Duvall show several times through the past few seasons, and he remains a favorite but Kelley seems to have that magical touch that could change the GNCC game.

At many rounds, Russell and Duvall lay back in the early laps and put a hard charge on later in the race. Steward Baylor attempted this at Ironman, but he waited a bit too long to put on his charge, and by the time he did Kelley had found his way into the lead and broke away from the pack.

This is pretty interesting to see because Kelley could very well be that third guy who matches, or ever bests the pace of Russell and Duvall in 2020. His Ironman performance definitely showed that he has the same smart mindset that the traditional lead duo has and if he can keep it up, and keep the competition at bay, he very well could put together the best rookie XC1 performance the series has ever seen. But without having battled a healthy Russell or DuVall in the XC1 class yet, it's hard to know what will happen when everyone is back on equal footing. Should make for an intriguing 2020 season!

The final rounds of each championship series always bring out the silly season rumors and with a larger crowd than usual, the Ironman GNCC is always full of buzz. The hottest rumors of the weekend see several top tier riders changing teams and manufacturers, and while nothing is set in stone just yet, the 2020 season could bring some of the biggest changes the series has seen in quite some time. These silly season rumors don’t exactly involve the top three riders in the season point standings, but there are still some really big names who will be shaking things up.

Kailub Russell is committed to KTM, at minimum through the end of 2020 and at that time does have the option for an additional four years. We know this for a fact as KTM issued a press release announcing the deal back in 2016. It was also announced earlier in 2019 that Thad Duvall had extended his Husqvarna contract for at least two more years. It’s also a fact that Ben Kelley will move to the Factory KTM squad in 2020 after spending the past two seasons aboard with the Trail Jesters KTM team, which is essentially a Factory-support team.

The rumors begin with Steward Baylor. Stu has been a lifelong KTM rider, all the way back to his days aboard a 50. However, the rumors buzzing indicate that will change in 2020 and Stu will be contesting the series on a new machine, from a different European trials and enduro bike manufacturer who currently does not have a team within the GNCC series. This actually sounds to have surpassed the rumor stage and looks to be a done deal, so don’t be surprised to see photos of Stu on a white, blue, and neon machine soon.

XC3 champ Jesse Ansley looks to remain with the Trail Jesters KTM team in 2020, but it looks as if he’ll be making the move to the XC2 class. He bumped up at Ironman after wrapping up the XC3 title at the previous round, but a mechanical issue would end his day early. Another interesting note out of the Trail Jesters folks is that one of their amateur riders, Simon Johnson, took Top Amateur honors for the season and will be moving into the XC2 class in 2019 as well!

Thanks in part by his back-to-back overall wins in the final two rounds, Ben Kelley ended this season third place overall in the final point standings, coming just behind the lead duo of Kailub Russell and Thad Duvall. He actually beat out Steward Baylor, who landed the season opening win and three additional overall podium finishes in 2019. Stu would end up fourth overall in the final standings with Trevor Bollinger rounding out the top five after missing two rounds due to illness earlier this season. Ricky Russell missed the first four rounds while recovering from injury and ended up sixth overall, just ahead of Andrew Delong in seventh with Josh Toth, Josh Strang, and Jordan Ashburn rounding out the top ten overall.

Kelley was the only XC2 rider in the top ten. Craig Delong was the second-ranked XC2 rider with 11th overall after missing the first three rounds. Mike Witkowski experienced an up and down season and would finish out the year third place in the XC2 class, just two points ahead of Evan Smith, with Liam Draper, who landed his first-ever XC2 class win this season, in fifth place. With Kelley out of the mix, the XC2 class has the potential to be highly competitive in 2020. Craig Delong, Mike Witkowski, Evan Smith, Liam Draper, Austin Lee, Ryder Lafferty, and Jonathan Johnson all landed XC2 podiums or wins in 2019 and will all be contending the XC2 class in 2020. These guys all have the chance to match each other in speed and next season very well could be one of the most intense XC2 championship battles in series history!