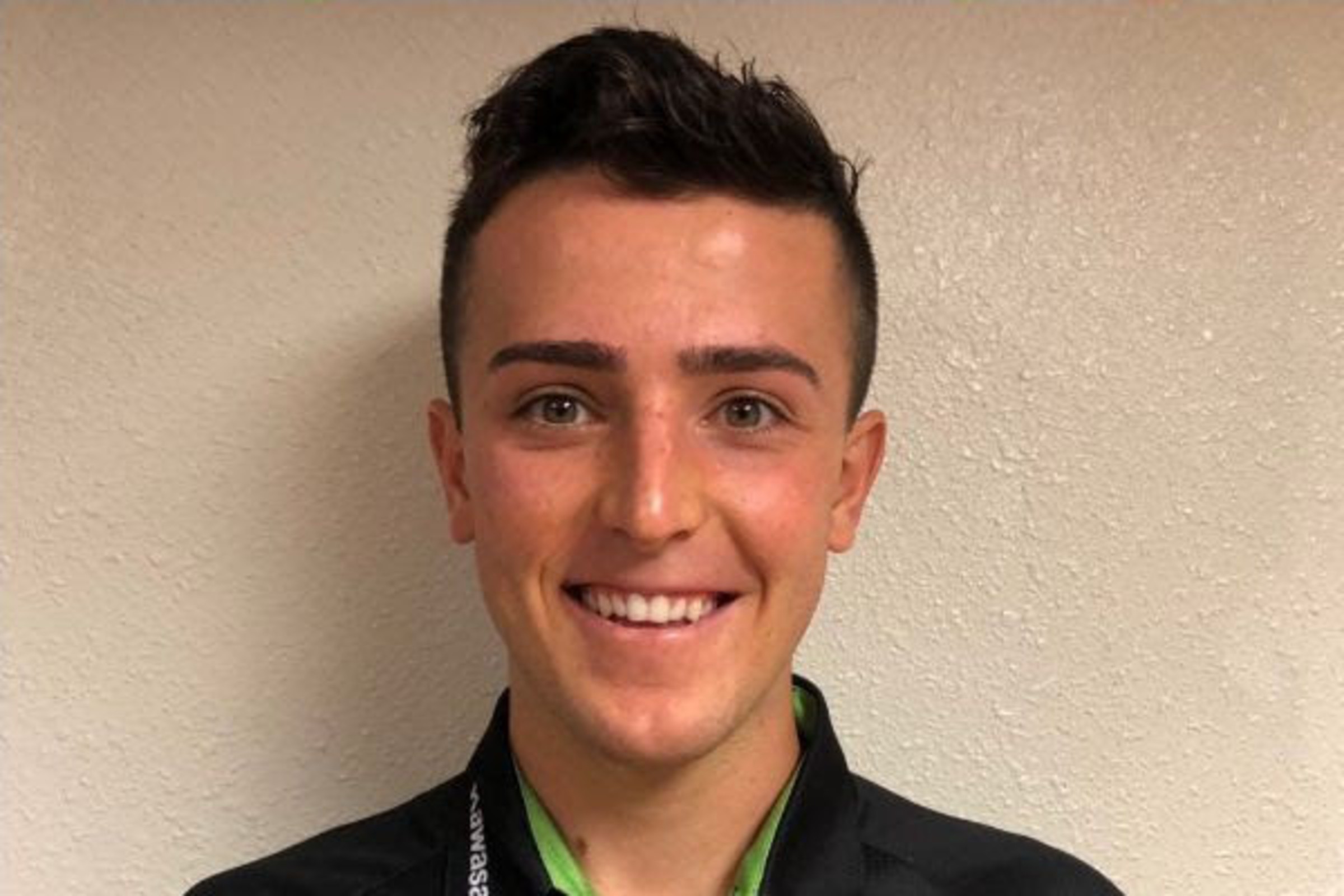 Cameron Mcadoo out of Sioux City, Iowa, lined up in 19 AMA events in 2019, specifically racing ten 250SX West main events In Monster Energy Supercross as a member of the GEICO Honda team, as well as nine Lucas Oil AMA Pro Motocross Championship events as a representative of the Troy Designs/Red Bull KTM organization. Something of a young man without a solid race team to call home during the past couple of years, the 21-year-old kept chipping away and finding a place to hang his helmet for the 2020 race season.

Through tenacity, hard work and self-belief, he finally found one inside a big white building located smack off the side of the CA-91 Riverside Freeway at 2771 Wardlow Road, Corona, California. Instead of searching for work again, he's now locked in with a fresh contract to race for Monster Energy/Pro Circuit Kawasaki for 2020.

While McAdoo has only been a professional for three years, he has had a bit of a rough go finding a place to call his own. Having first met McAdoo last weekend inside the Pro Circuit hauler at the Monster Energy Cup over in Las Vegas, Nevada, Racer X circled the wagons this Saturday afternoon and found some time with the Sioux City racer. Contract in hand and Mitch Payton motorcycle at his behest, McAdoo couldn’t have been happier and was, well, in a talking sort of mood.

Racer X: Cameron, what’s happening this weekend in Southern California? From what I can gather from your friends and social media, you’ve been out riding quite a bit.
Cameron Mcadoo: Yep, yep, went to Kawasaki K2 [test track] and just rode this morning and I’m just throwing some lunch together right now and I have the gym this afternoon.

How has everything been going for you? And here’s an even bigger question that I’m going to throw at you: How does it feel to now be on an established team and to be standing on some strong ground heading into 2020?
Yeah, I think that has been the biggest thing for me.

Tell me about that.
Yeah, I mean I’ve been basically a fill-in guy along the way and have been going around during the off-season and not knowing where I’m going to be during the next season for the last big period of time now. It’s really nice to have this ride. I finally have a group behind me that I know will help me into the season and who believes in me and to be able to start working here right now in October is really nice!

Well, there is a lot to be said about how you’ve dropped in and out of these world class race teams, performed for them, and then moved on to the next opportunity. All this speaks volumes about your versatility.
Yeah, for sure. For me, I just needed to kind of do whatever I had to do to stay at it and keep myself relevant. I knew it all would work out in a way and fortunately it did.

How did the Monster Energy/Pro Circuit Kawasaki outfit come at you for 2020?
I mean, honestly, even last year coming into the off-season, especially between 2018 and 2019, any time that I was out in California I would go down to Pro Circuit three or four times a week and ask for Mitch [Payton]. I was doing everything that I could. It would be like, “Mitch, what do I have to do?” Obviously, I didn’t have a ride coming into ’19 so I came out here to live full-time because I had been living in South Carolina in past years. Yeah, I had a supercross-only deal with GEICO, but I was still going into Mitch Payton’s office every day. After [Austin] Forkner got hurt, I was going into Mitch’s shop and saying, “What do I have to do to ride that bike outdoors?” And Mitch then said, “Well, Kawasaki is going to go with three guys, so I don’t need to replace Forkner.” Then I said to Mitch, “Man, I’d really love a spot on your team next year.” Mitch sounded like he was going to be full with his team and then I got a call from TLD to do the outdoors, so that worked out well. I was able to continue racing outdoors. Towards the end of the outdoors, I was under the understanding that Mitch was full, but then I received some information from someone that said Mitch still had a spot and was interested in me. The next day I called Mitch and he said, “Come down to the office. Let’s talk.” So I talked with Mitch and the team and they were interested and I was interested too. That was just before Washougal this summer. In the following weeks after Washougal, I got a hold of Mitch and said, “I’m kind of up against the wall here. I have an offer from KTM.” Mitch then said to me, “Let’s make something happen. Come down to the office tomorrow.” The very next day it was a done deal. That was awesome how it came together. I was fortunate enough that they saw potential in me and felt like I was the guy to do it.

You showed a lot of heart and character going into that big white building off the side of the 91 freeway in Corona to talk with Mitch and to try and sell him on taking a chance on you. Not many young dudes would be able to do such a thing.
Honestly, I was like, “Man, I’m going to keep going in there until he tells me to get away and never come back.” And that’s what people told me about Mitch. People told me, “With Mitch, you just have to keep going. He loves it.” So I kept going down there and I’d walk through the front door and pass through the front customer area and would ask the lady out there, “Hey, can I talk to Mitch?” I was going to do everything that I possibly could to try and make it happen.

And you ultimately ended up with a firm deal with Mitch and the Monster Energy/Pro Circuit Kawasaki team.
Yeah, it’s awesome. It’s a lot of relief. It’s really good for myself as a rider to be able to come into an off-season and know what I’m doing. I’ll be working off a great new platform with a great bike and team. I’ve got a really good trainer. I’m just in a really good spot right now. In the past, I feel like I’ve done a fairly good job with being scattered all around. It’s no one’s fault. I think it is going to be really exciting coming into this year.

And word has it that you’ll be working with both Adam Cianciarulo and Nick Wey this off-season and into 2020. Correct?
Yeah, it has been awesome. Nick is really good and he’s got tons of experience, and the same with Adam, him being training partner, and that’s really good. I’m excited, for sure.

Have you been riding the Kawasaki KX250 quite a bit, and if so, how do you feel about the bike and its performance?
Yeah, I actually started riding the bike at the very end of September and I’ve been on supercross for a couple of weeks now and the bike is awesome. I’m working on the bike and we’re working on it from where AC left off. The bike is in a really good spot and I really like it. I rode Kawasaki bikes the last couple years of my amateur career, so I’m pretty familiar with the bikes. Obviously, I’ve done a lot of switching around on bikes and stuff these last few years, and everyone has been like, “Is it really hard to adapt?” I went from a Honda to a KTM, which is a huge difference and then I went from a KTM to a Kawasaki. For me, it’s pretty easy to be able to say, “It’s not a KTM and it’s a completely different bike from what I rode this year, but I’ll figure it out.” I will say, though, that the Kawasaki is in a good spot and I’m really happy with it right now.

I’ve read in recent weeks that your masterplan for 2020 is to be a podium guy every single weekend. Will this be, in fact, your approach come the January of 2019?
Yeah, honestly, I want to win. I know that I’ve got what it takes and I’ve got the bike and the team to do it. I think everyone around me is working with the same understanding and moving towards the same goal and that goal is to win races. I have not won a race yet and that is where I want to be and that’s where I plan to be. I plan to be on the podium consistently and I want to be sticking my neck out there for race wins every weekend. There are a lot of things to winning races at this level and I think we’ve got all the pieces of the puzzle, we just have to put it together now.