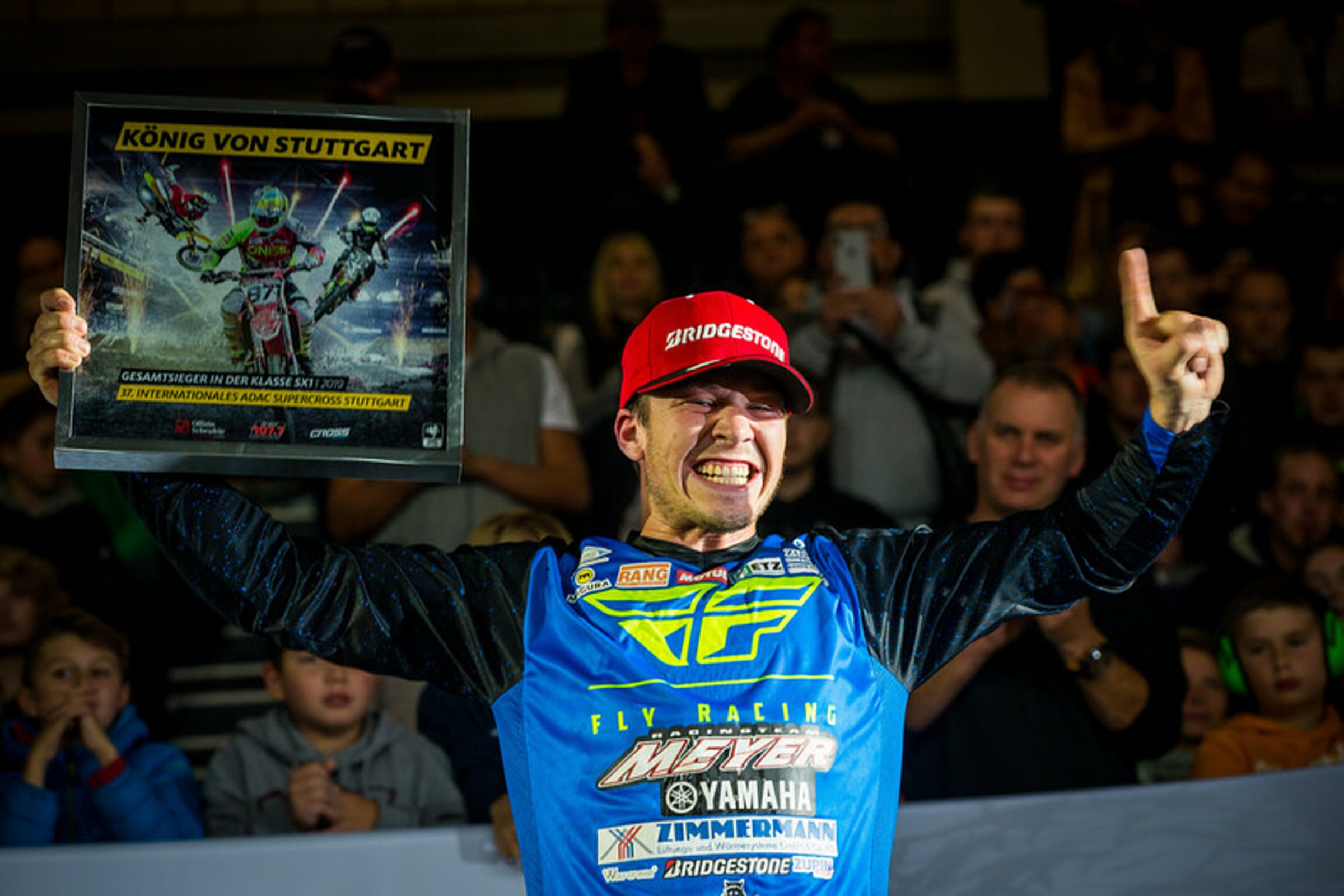 There may not be any AMA Supercross or Motocross racing in the United States right now, but there’s racing going on all over the globe, with plenty of Americans engaging in competition against the rest of the world. Ryan Breece is one of them, and he’s been doing well, recently breaking through to win the first round of the ADAC (Allgemeiner Deutscher Automobil-Club) German Supercross series.

We caught up with Breece to learn more about moonlighting in Germany.

Racer X: Nice showing in Stuttgart! Take us through it.
Ryan Breece: Right from the start on press day everything was going pretty smoothly. We had a setting that was working well from the previous year and everything was just clicking. We started off with our timed session on Friday night, hit the top of the board there and were feeling pretty good. The team was gelling too, I was riding for the Meyer Yamaha team. A lot of it was just survival. It’s so tight and there’s a lot of carnage. I kind of rode around, really. People were taking each other out, and if you could last 20 laps, you’re solid, you’ll end up top five. Guys crash out all the time. It’s a tight track, section after section, with no breathing room. It makes for some intense racing.

What led to you racing in Europe?
I had a really good connection with Cole Siebler, he lived in the same state as myself, and I’d always go ride his supercross track for practice. From there he kind of mentioned my name to Klaus, the owner of Meyer Racing, and I got a call from him one day and he pretty much set everything up. The next thing you know, October rolls around and I’m flying over there. That was back in 2015, believe it or not, and we’ve had a really good relationship since.

Where does this win rank compared to other achievements in your career?
It’s always been something that I’ve been pursuing. I want to win a championship over there. Whether it’s little or big, it’s worth a bunch of memories. It’s cool over there. So I’d say it ranks at the top. I raced Arenacross Lites a few years back, that was cool, but this one was just like, “Okay let it soak in, you’re finally battling in the front where you need to be.” It’s been a long process and we’ve been having to do it on my own dime, so getting this win is pretty high up there, it definitely meant something to me.

Are you doing the rest of the series or are you back in America for good now?
I’m back in the States right now getting ready for supercross but I fly out next week I think. I’m going to do the Chemnitz supercross round, and the plan is Dortmund. It’s a full contract on that. But I want to make sure I’m ready for A1 too. That’s the real deal. All these other races are about getting in laps and getting prepped for it.

Talk about some of the differences of racing internationally. Not necessarily the racing itself, but the other stuff that’s part of the experience.
Probably just adapting to everything, like the food and dealing with the jetlag. It’s nine hours, and some countries ten or eleven, difference. It’s just so different. It’s hard to explain it. But I had a good setup where I was flying in maybe a week early in order to adapt to the time change. I’d be prepping, getting good sweats in, and making sure everything is working. The food makes your body so different. You’re trying to sip on five cups of coffee at 9:30 in the morning over there, then you can’t sleep and you’re up until 11:00 p.m. That’s a difficult situation, but luckily I’ve had a solid team over there that takes really good care of me.

Getting this win has got to be a good boost for you coming into 2020.
Yeah, it’s a good confidence booster. It seems like all the teams are filled up in the U.S., so it doesn’t really mean anything there, but to me it helps with self-confidence. It tells me if I keep working I can be running with those guys in the top ten. It doesn’t mean anything to anyone in the States, sadly. It’s cutthroat out there! There are so many guys and not many spots. But it helps a lot with my motivation.

What do you have coming up for 2020?
I’ve reached out to a few teams to see what’s happening, to see what’s going on. I rode for Cycle Trader/Rock River Yamaha last year, so I’ve been kind of staying in touch, but gosh man, it seems like everyone is just full. So it looks like we’ll be doing what we did last year. I got a couple Yamahas from a local dealer who is helping me out with demos, which is part of the Blu Cru program. And KYB and Enzo Suspension are on board too. I think we’ll do a privateer deal and hope for the best. I’d really like to thank all the people who have continually supported me too. It’s helped a lot and I wouldn’t be where I am without them.