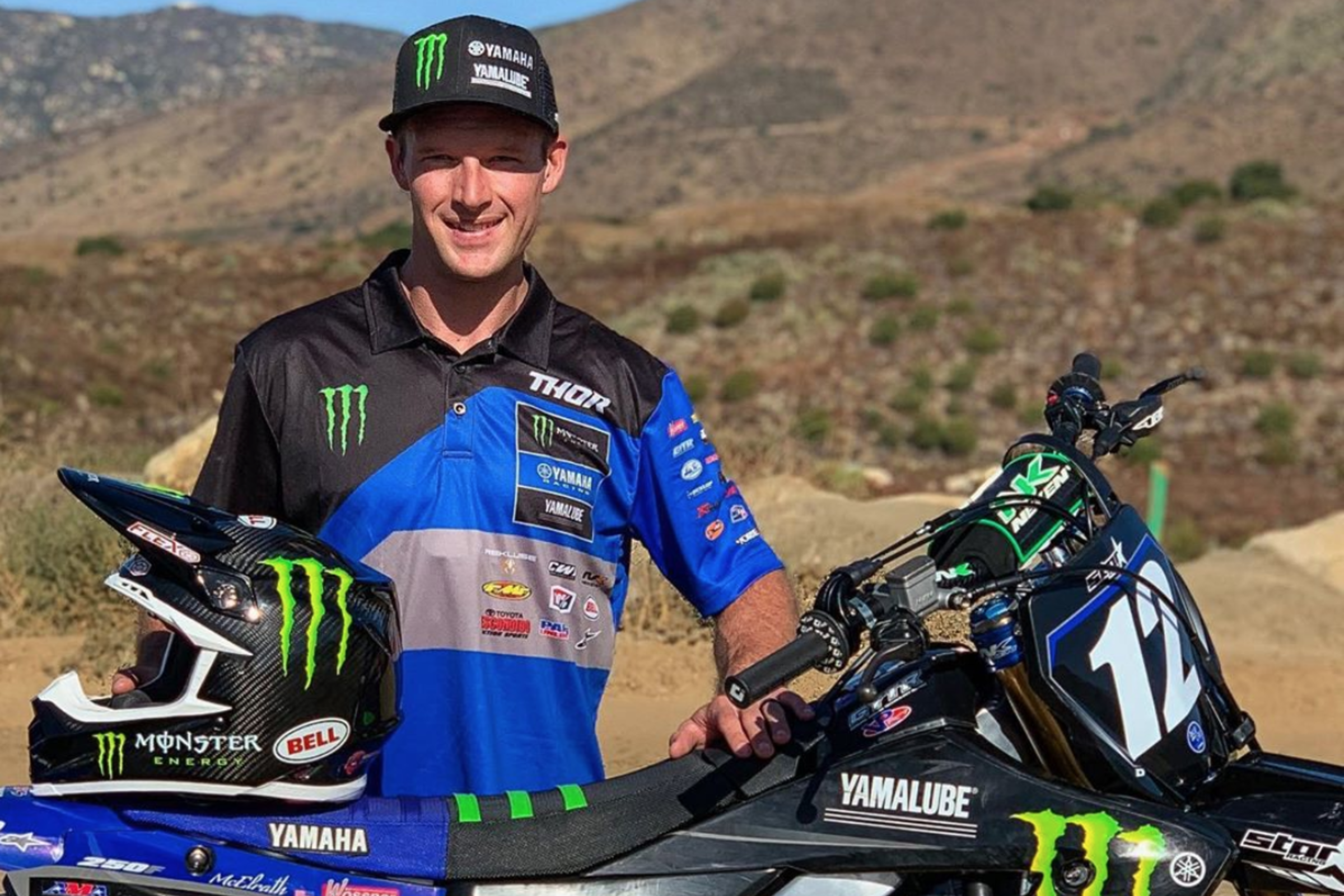 If one goes back and scans through the Racer X Vault and looks up the name Shane McElrath of Canton, North Carolina, the numbers and dates illustrate that the racer, having just wrapped up his 2019 season, has competed in precisely 117 pro supercross and motocross AMA races during his seven-year career. Intriguingly, he lined-up for Troy Lee and his Troy Lee Designs racing organization in every single one of them (on Hondas, and later, KTMs), but that run has come to a close.

Beginning in 2020, Shane McElrath, in what was one very big Alpinestars boot step, has packed up his gear bag and made the move over to the Monster Energy/Star Racing Yamaha team. A winner at Angel Stadium as well as Budds Creek in ’19, McElrath wants more and believes the change just might be the catalyst he needs to capture his first AMA title. This afternoon, we spoke with the 25-year-old Yamaha rider.

Racer X: Okay Shane, first off, did you make it over to the Monster Energy Cup to watch or just hang out?
Shane McElrath: No, I didn’t go this year. My wife and I decided to stay here and take advantage of our weekend off.

Did you watch it on television?
Yes.

Even from your couch and TV screen, what did you make of the whole thing?
It was pretty crazy. I love being at the races and I love watching it all—I’m just a fan of the sport. I was a little bummed to miss the race in person, but I was okay with watching it from home. It was some really good racing.

We’re excited to announce that @shanemcelrath_ has joined the Monster Energy/Star Racing/Yamaha Team for 2020 and beyond. With multiple Supercross and National wins to his credit, McElrath is hoping to earn his first championship on blue! | #starracingyamaha #sx #supercross

You raced Adam Cianciarulo all year long. What’s your take on his performance on Saturday night over in Las Vegas?
Yeah, I was pretty happy for him. I thought he rode really well. I thought he rode the 450 good. I think it was a good first race for him. There are obviously going to be more guys come supercross season that are good, but he showed his speed and he showed what he is capable of. I mean, even with the whole field out there, he’s definitely going to be a force to be reckoned with. It’s not like he’s far off, by any means. It was cool to see him do as good as he did, not that I didn’t think that he could. It was great to see him on the 450 for the first time at that race and there was just a lot on the line and he performed well.

And the Shane McElrath program has just gone through some radical change, hasn’t it?
Yep.

How did the change come about?
It was really just something my wife and I decided on. We felt like we just needed some change. We felt like we had kind of been stuck in a rut. We really felt like God was calling us out of our comfort zone and we were kind of afraid to stay comfortable rather than to take a step of faith and try to give myself the best opportunity. I love Troy and I loved the team and have been there seven years now. It was the hardest thing that we had to do up to this point in our lives, but like I said, we just needed some change and we’re full steam ahead.

I’ve had other racers in the past tell me that change can be both inspiring and positive. Sounds to me like you’re taking a good, calculated risk. Did you look into the team closely before making the decision?
No, not really. I spoke with team personnel maybe three or four times. We were just kind of talking about next year and just trying to work out some little things and we pretty much talked business. I mean I’ve kind of seen the team from the outside and I’ve obviously have had to race them the past couple years. That was kind of what I told the team from the beginning. I told them they didn’t have to sell me on the bike I said, “I race you guys every weekend and you don’t have to tell me your bike is good.” Yeah, we just needed a change and that door opened and we really felt like it was going to be a good fit. And it has been so far. We really like the team. They have been very accommodating and it’s just a good place to make something happen. We’re excited to be where we are at this point.

You hovered around the top five throughout the 250SX West Region and 250 Class of outdoors and won big races at Anaheim and at Budds Creek. Looking back over your shoulder, what’s your take on your 2019 season?
That was really the hardest part about this year. We had a few injuries, but to have some good races and then to have races that weren’t as good, as a racer you don’t want to finish in second place. It’s hard to accept those defeats—especially if you’re just a little bit off. Now days being a little off is five to ten positions. That can be really disheartening. At the same time, I’ve always believed that I can do it, but I didn’t make it happen as many times that I should have. Results-wise, it wasn’t necessarily my best year, but personally, I feel like it was my biggest year of growth and that’s really what we’re taking from it in moving to this new team. I’m constantly learning and constantly trying to be better. Now, with this whole new set of opportunities, just the freshness, it’s just really exciting going to the track every day and earning little things and trying to fix bad habits. The newness to everything really brings it to life.

We’re excited to have a new team member for 2020 in @shanemcelrath_ Any predictions about how he’ll do on blue? | #starracingyamaha #motocross #dirtbike #supercross

And while you’re making a wholesale change, you’ll still be racing in the 250cc classifications in 2020, so you’ll know your competition and your place in the grand scheme of things.
Exactly. Like you said, it’s been a big change, but at the same time, it’s not really a change that we were that nervous about. It gets to a point as a racer where you feel like you’re doing everything you can and you just feel like you hit a wall and it’s like, “Man, what else can I do to be better?” With this change to the Yamaha team, it doesn’t really feel like that big of a change. Still, making this change and to see the progress that we are making, it is like everything seems to be working really well together.

You’ve obviously turned in your Troy Lee Designs/Red Bull KTM 250 SX-F. Thus far, how do you like riding the Yamaha YZ250F?
I love it. I mean there is really nothing to complain about. Every team has a good bike, but I mean there are teams that have their own little things that they use to make the bike great. And the Yamaha is great in its own way. I haven’t been on an aluminum frame in a long time and I haven’t been on air forks in a long time, but knowing how much success the team has on all this, I’m saying, “Okay, it may take some taking used to, but it has to work.” That was probably my biggest thing coming in. I want to do really good this year and I’m not holding anything back. With this team change there has been a lot of humbling in my life and I’m kind of at the point where I don’t really care which coast I race. I’m really excited with where we are and with the progress we are making this early. I’ll be ready for whatever. I’m just excited with where we are at. Just being around the whole team has been great. Between all of their riders, they have had very good years in both supercross and outdoors the last couple years. It always seems like when we are at the races, we are chasing them. I believe that I am one of the best in the 250 class, but I also have a lot to learn from my teammates. I’m coming into this team knowing there has got to be something on this team that works, because all the guys on the Yamaha team did pretty well last year and all of them are different riders and all of them have different styles. The only thing that really stayed the same is that I brought my mechanic with me and I’m wearing the same boots. Everything else is different and new and fresh and I’m just really understanding how this team works and how the guys operate together. I want to be somebody who can hold the team accountable and can be someone to help them grow, and hopefully win more championships.

Right on, Shane. Last question: What’s your masterplan for 2020?
Really, I hold really high standards for myself. Right now, during the off-season, we’ve already started working on some of my weaknesses. I believe that I can win and I believe that I have the ability and the talent and I haven’t really put all of the pieces together, and right now, that’s what we’re working on. I really expect to win every weekend I’m out there, and I know things happen here and there, but my goal biggest goal is to be consistent every single weekend and I know that if I do that, then I have a really good chance at winning the championship. That’s really my goal for supercross and outdoors. I just want to take advantage of what I have and try to be the best and the most efficient that I can be the whole year.