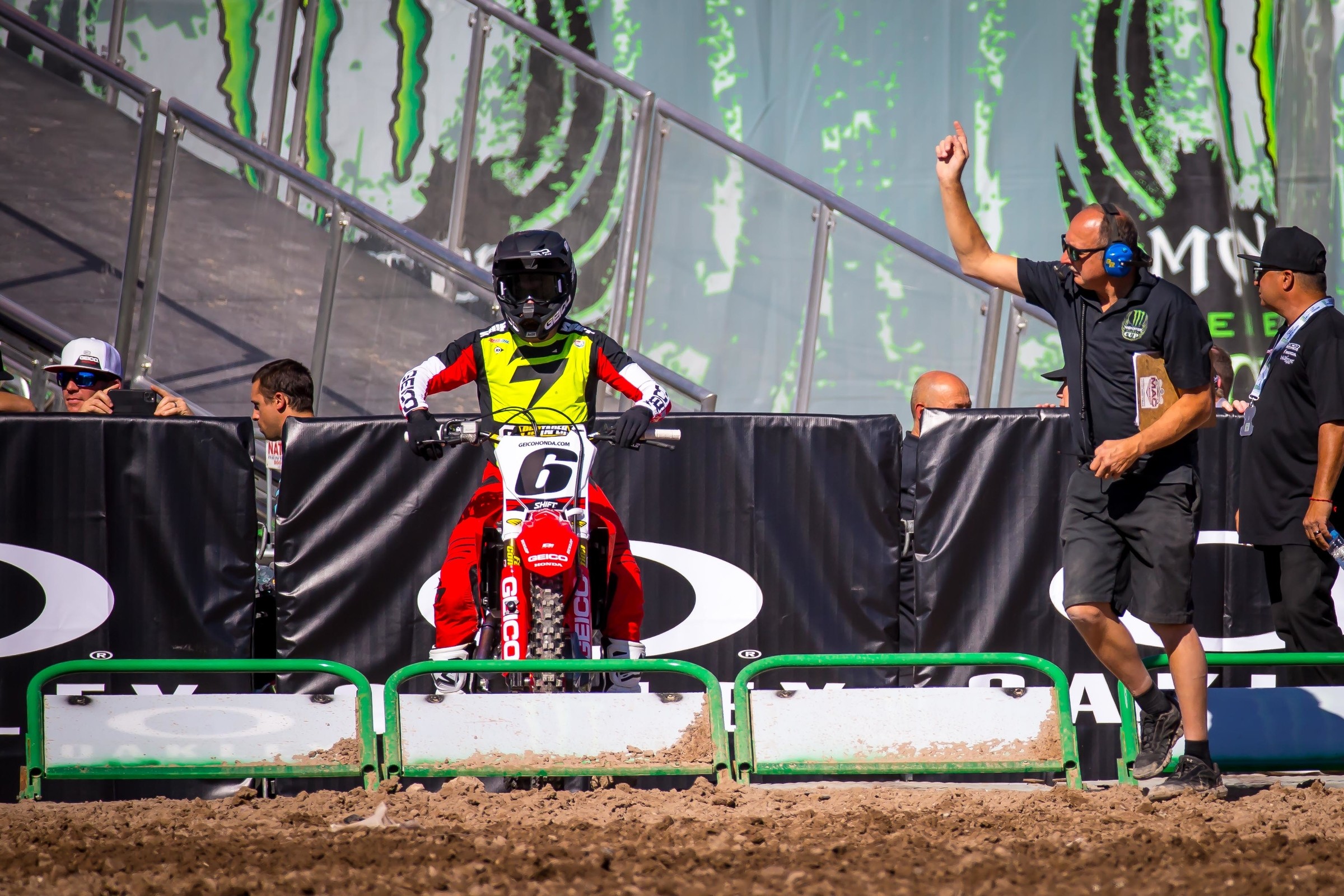 Jeremy Martin showed up to race Monster Energy Cup at the last second, but he looked a lot more prepared than he really was, because he rode well and sat in contention for a top five for most of the night. Consider that Martin had not raced since June of 2018 due to a gnarly back injury—then a major infection, then more back surgery—and it was an impressive jump back into racing.

Steve Matthes got an update from the GEICO Honda rider after the race.

Racer X: Monster Cup, a late addition. Good to see you back on a bike, man. Really cool. Thanks for coming out. That’s awesome.
Jeremy Martin: Yeah, I really appreciate that. Really excited to be here. Help me burn off the pint of ice cream I had when I committed to coming here to race.

So you’re riding supercross. You started feeling good and you were like, “Hey, there’s a race this weekend in Vegas.” Is that kind of how it went?
Yeah, pretty much. I was like, well, they’re going forward, they’re going backwards. Then I looked at the entry list and not everybody was in it. I was like, You know what? This would be a perfect race just to see where you’re at. I was like, you’re not 100 percent as far as fitness and your old form, but you’ve got to start somewhere. So let’s get comfortable right now.

Honestly, you were better than I thought you’d be, for real. I’m like, he hasn’t raced for so long now. I thought you were really good.
For sure. When I first originally rode the bike I was like, wow. Even a lot of people close by that watched me ride right away were like, holy shit. It just goes to show. Then also, too, I think the mindset is good now. I took a long time away, got a real job, saw what real life is like. I’m ready.

So tonight you crashed in the last one, but other than that, you were probably going to get sixth or seventh overall.
Yeah. I was sitting fifth overall with a 6-6. I was I think fifth the first lap and then Mookie [Malcolm Stewart] just slid out and I had nowhere to go.

What’d you think of the reverse track thing?
I practiced some sections during the week like that, but preferably, no. Just because some of the takeoffs that you would take off on going the original way, it was cool. But then when you would and or you would triple, you would accelerate. So that takeoff face going the other way was super janky. Not to mention, I rode the Joker Lane and after practice I tried it. I went over to the Dirt Wurx guys and I’m like, “Hey, are you guys going to make it a little bit more forgiving?” And they were like, “No.”

Bloss got all jerky and a few guys got all screwed up on it.
I rolled it. I almost went over the bars.

Your back’s fine, right? You told us on the Pulp Show. You feel no problem.
Obviously it’s not what it was. I’ve got three vertebrae that are now one bone. I feel the hardware in there. It’s no joke. But this is what I have and it’s time to get shit done with what I have.

You look ripped. You like you’re in shape. You’re skinny.
Yeah. I’ve been really training hard. Obviously taking rest too so I don’t get all sick again like I did back in ’16. My back’s against the wall and I have to perform.

That’s it? It's totally done?
Congratulations, Phil. I’m not going to text you and say congrats.

No, I wouldn’t expect you to. So does this mean we could see you on West?
I’m more East. To be honest, I’ve already said it in social media posts, I need more time. Obviously today, people were like, whoa.

But it wasn’t a full supercross track.
Yeah, so I just need some more time.

It’s nice to see you out here. When I heard you were racing I was like, what? I had no idea. It’s awesome to see you back on the bike and now the full comeback will start in East and hopefully good things will happen.
Yeah, stoked for sure that I was able to keep it quiet and surprise people. Did you even know until Thursday or Friday?

No!
So that was my whole goal. I was like, the media knows a lot of shit these days. I was like, we’ll try to keep this under wraps.

I was even texting with Troll [Alex Martin, brother] back and forth about some different stuff and he never spilled the beans either.
Yeah, that a boy!