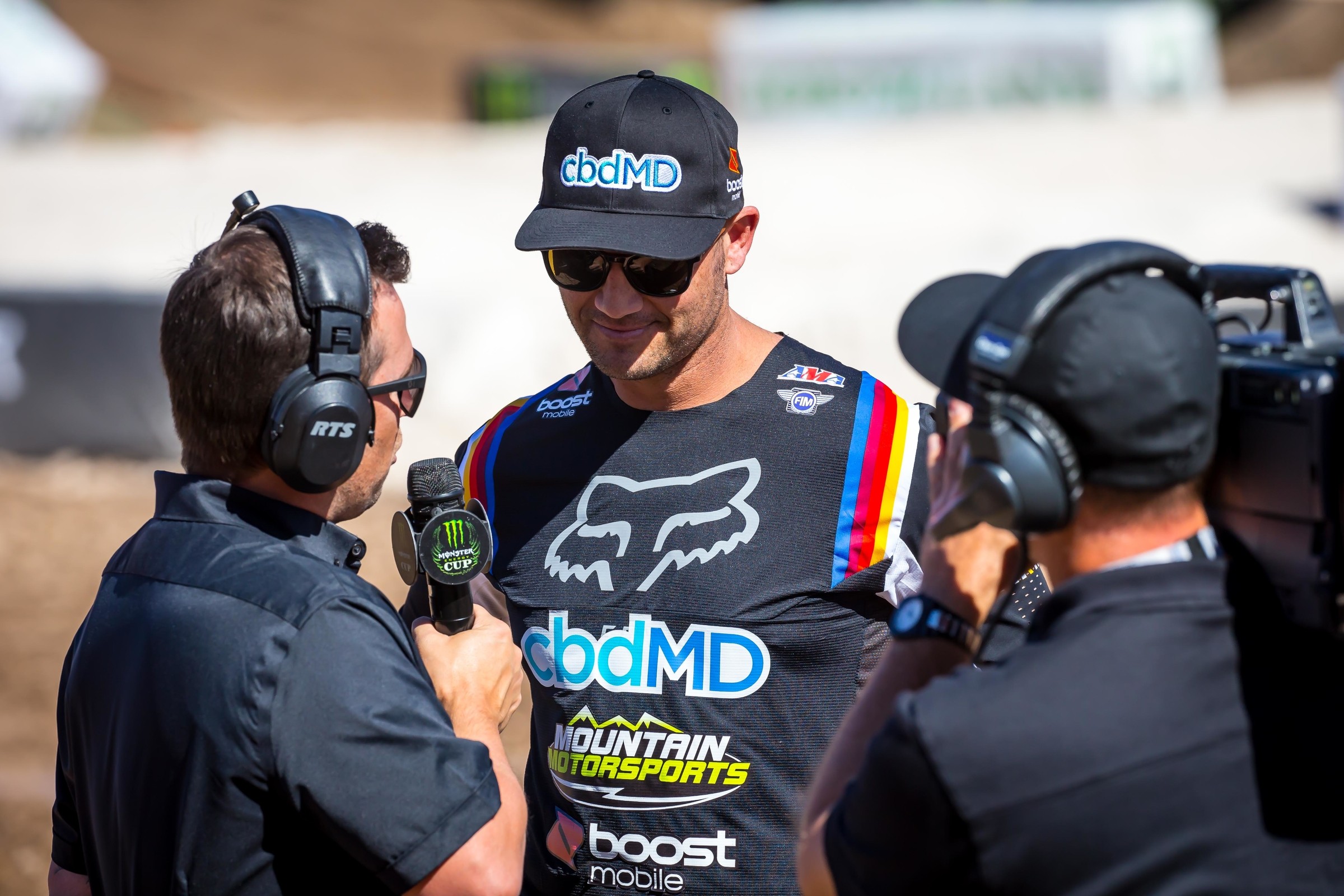 With the JGRMX/Yoshimura Suzuki factory team in a bit of a holding pattern right now—the team is actively searching for a title sponsor and enough Suzuki support to try to lock down its 2020 plans and budget—Chad Reed has chosen to put his own program together for off-season races like Monster Energy Cup, and supercross races in New Zealand, Australia, and more.

It’s key to note how quickly Chad put this program together. About two weeks ago he grabbed a Honda, threw some personal sponsor logos and aftermarket parts on it, and gave Monster Energy Cup a shot. Reed had to use the LCQ to get into the show. He made it in and went 8-12-10 for ninth overall.

Matthes checked in with Reed after the race.

Racer X: Not a lot of prep coming in, so maybe not the night you wanted to, but talk about it anyway.
Chad Reed: Honestly, I had fun. Even press day, I did more laps in press day than I had done in six weeks. You obviously acknowledge and know that it’s going to be a tough weekend. I think I finished tenth overall. The potential that I feel is there. That’s what you always want. Generally, though on paper it looks like we’re far off, I feel like with some time we can get there. I’m encouraged by the weekend. We had no issues. Everything went smooth.

I was going to ask about a bike issue that last practice. I thought maybe you had one, or no?
No, not that I remember. No, I didn’t. Really the biggest issue all day was I didn’t get a good lap in. I was on a decent lap when unfortunately, Deano [Dean Wilson] crashed, so then that kind of put me in the Last Chance. I just took too long. Even when I’m at my best, I take too long to get up to speed. I actually tried to take it a little easier this weekend, if I’m honest. You have to understand where you’re at and just chip away, chip away, and feel it out. My first and second starts were really good. My third one was terrible. I don't know why. I just got a lot of traction and wheelied. Roost hurt way too much.

So you’ll be on a Honda for the overseas stuff and Australia stuff? Is that kind of set in stone?
Yeah, that’s the plan. I think we’ll clean this thing up and we’ll put it in a crate and probably send this one off to New Zealand actually.

So why a Honda?
I chose a Honda because I generally think that there’s a lot of options. There’s a lot of people that make parts for the Honda. It seems like the Honda and the Yamaha you generally can go and buy… There’s probably two or three sets of triple clamp companies that make [options for] it. There’s linkages that people make. There’s just a lot of things. Engine mounts, chassis tabs. Got experience with the factory race teams over the years. You put good products on these bikes and they quickly come around. I can say that probably the roughest part of this whole thing—the first day was a disaster. Everything was just thrown together. We just had a lot of issues. Then day two went a little smoother, day three. Then I was smoked because I went three days straight. Then that was it. We came back one more day to ride my race bike, and then we went to Vegas. That’s probably my answer. Then I would say that first impression was kind of like, “Shit. What did I do here?” I don’t think it was a bike issue. It was actually we had some wrong parts, so it was kind of throwing us a bit of a curve ball. Then we luckily found it kind of towards the end of the day. We regrouped and came back and everything was real good. From there, obviously I think it helps a lot the fact that I’m working with Johnny [Oler, former JGR suspension technician].

He knows a thing or two about suspension and what you like, too?
Johnny and his new [suspension] company, Art of War. You just spent twelve months working with the guy, so you can get to where you need to quite fast. So I think that that probably honestly contributed to the fact that I was comfortable. The only thing we did all day is I added 5cc of oil to the fork, and that was it. We didn’t even really mess with it.

Johnny couldn’t come out, though. I already gave him shit. He couldn’t be here.
He had a baby shower. You only have a first baby one time, so fully understand that. Honestly it was kind of nice not to have someone. Could we have made changes to make it better? Absolutely. But it was kind of nice to just generally go out, spin laps, ride laps, get more comfortable, feel an issue and then when that issue happens over and over and over, or if you’re like, I need it to be a little better here or there, I felt like I’m leaving here with a head full of steam on knowing what to tackle next. So like I said, just honestly on paper nothing to call home about, but confidently, I don't think that anyone out there would do what I did this weekend.

Probably not. Not with that little time.
It was pretty ridiculous. Honestly it was all cbdMD driven. I was well aware of them working with Feld and this deal [sponsoring supercross]. As soon as that happened and they were like, will you do it? How else do you do it with somebody else? You support the people that support you, so here we are.

I was going to ask you. The company is on board with the supercross guys now. Of course, you battled with these guys last year. The media guys met with the lawyer from Feld yesterday so they could explain the latest parts of this deal. I said, “I can’t wait to talk to Chad about this,” and they made a joke about it too. I’m glad to see it’s more accepted. This is a pot of money, not just for the series but for teams and riders. It’s a good thing.
I think it’s a category that needs to be a little bit freer. I will say, and I think I mentioned this to you when I was in Vegas a couple weeks ago, it’s not a category that’s equal. It’s not an equal category. There are certain CBD companies that I don’t think fit supercross.

Some of them make some pretty outrageous claims.
Yeah. There’s a lot of things like that. Even last year, do you want to be censored? No, but you understand it. I saw the big picture, and that’s why I took advantage of these guys being able to work with Feld because in the big scheme of things it helps me. When I can physically or visually run the logo, that helps me as well. Just proud. From Discount Tire to now cbdMD, I’m contributing to supercross. Hopefully I leave it better than when I arrived in it.

What’d you think about the reverse direction of the track tonight and that whole format idea?
I like the idea, but in reality I think we were all promised that they were going tweak on the track and kind of fix the rhythms and stuff.

In-between the races?
Yeah. Generally everyone was like, don’t worry about it. It’s going to be fine. Then it just I think in reality that was really challenging and tough to pull off. When we went backwards, you really felt like you were going backwards. I struggled with it all day, so maybe I was a little more sensitive than most just because of my lack of time on the bike. But I just in general felt a little bit sketchy going the other way. Mainly because the last practice and then also our race, there was a lot of accelerating down the backside of the jump, and that was now our takeoff. So it was a little bit sketchy.

Evan Ferry won tonight. You’re going to stick around to race him I guess? That’s what Timmy just told me?
I just talked to Timmy and Ellie goes, “How old is he again?” He’s like, “Fifteen.” I don't know that he goes pro next year, but he literally could go pro at 16 years old. I’m like, man, I’m going to have to drop down to the Lites class so I can race two Ferrys. That’s so awesome. Obviously, he doesn’t ride a whole lot of supercross, but having the people that he sees and the access to supercross, it’s pretty cool to see him go out and crush it like that.