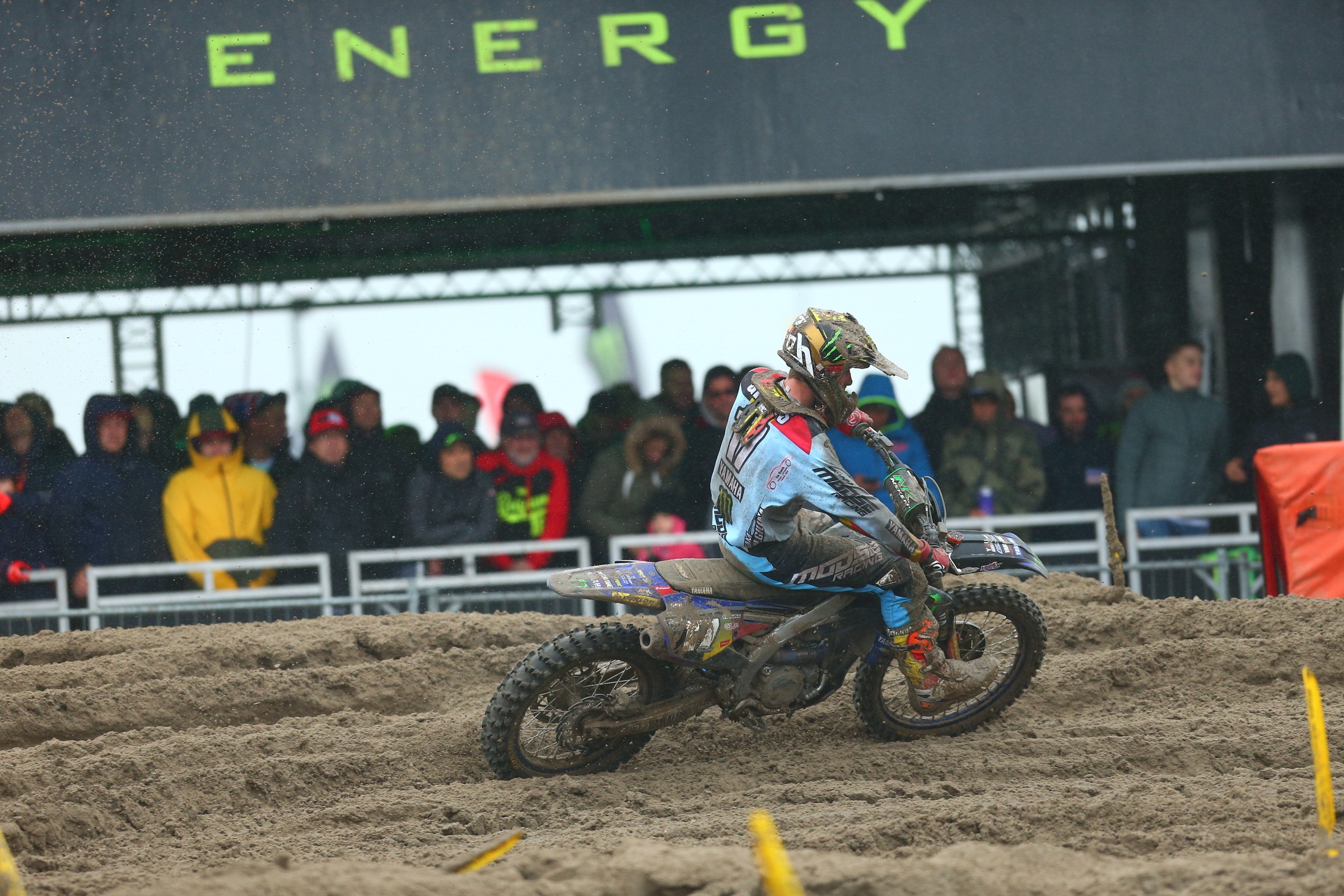 Racer X: Johan, it was a tough start to the event for you with a problem with Jago [Geerts] in the first race. It just seemed like you were always fighting uphill. Going into the last race you still had a chance and somehow managed to come away with a podium.
Johan Boonen: For sure. It was like, woah, surprising. ...The guys never lost confidence from the good qualifying yesterday. They [were] always thinking about the podium [being] possible. Holeshot, almost holeshot from Jeremy the last moto. The motivation was so high. And then we saw Kevin on the floor that first corner, so this was not so good. But he came back to 13th or 14th, so it was perfect.

It’s been a couple years since you’ve been on the podium. How sweet is it to make the podium here in Assen, just north of the border?
Yeah, it’s nice. We feel also like home. Belgium is full of Dutch people and here it’s full of Belgians. So it’s really nice. It’s like a home race. For us it’s an easy one—a lot easier than last year. It’s really nice.

Racer X: Kevin, back on the podium for Team Belgium. How do you feel on the performance for you and the team today? Because you’ve been around quite a while. In 2004 you won it in Lierop, actually. So to be back on the podium 15 years later, that’s quite an achievement.
Kevin Strijbos: For sure. I think it felt good. It’s good that Team Belgium get on the podium again. It’s been a while. I think we all did our best for that. Unfortunately for myself, it was quite difficult. Yesterday was pretty good, but first moto I crashed twice and didn’t restart quick enough. Second moto got a bad start again and crashed first lap, so I was dead last. It’s a big shame when I have to speak for myself, for my own riding. I would have been doing a bit better. But it’s good for the podium. I think it was hard to beat Holland anyway. Our goal was to be on the podium and that’s what we did, so it’s good.

Podium pie yesterday with TEAM BELGIUM with a 2nd place!!! Great ride by both of my teammates @jagogeerts193 and @jeremyvanhorebeek in these conditions. I made it difficult for myself with crashing hard first moto. Rode the best i could with a bend handlebar but crashed again and finished 17th. Second moto crashed in the first lap and i thought, oke i fucked it up for the podium. But on the other side i knew it was going to be a long race so tried to find a good speed and finished 11th. I can’t say im happy with those results but consider all that happened my speed was still good. Thanks to @teambelgiummxon2019 coach @johanboonen for believing in me. BIG BIG thank you to Louis Vosters from @wilvoyamahamxgp and @yamaharacingcomofficial for giving me this opportunity to race for them this weekend! It was great to be a part of this great team! Couldnt have done it with the work of @dennisdierckx18 @vervloesemben @reneebert450 @tonkovmoto . You guys are awsome!! Thanks Hans Corvers from @kemea_yamaha who started this idea for this weekend! My private sponsors from this year @just1racing @formaboots @rynopower @fietsen_schenk @technicaltouchracing @danielcrowerracing @denicol_lubricants @wlmdesign #hens #standingconstruct thanks for helping me!! All the fans who came to support us this weekend! ??????. Last but not least my super great lovely girlfriend @yentlhaazen22ks to be by my side in good and bad days, my son Jayden who makes my bad days a lot better and the better days even more better. Thats it for now. We will see what the future brings. ?? ? @evaszabadfi_photo

Racer X: Jago, a mixture of two different races really for you. You were in a good position in race one before you had a problem, but you came back well in the second race to win your class at least.
Jago Geerts: Yeah, the bike broke in the first heat, so that was a little bit a shame. But then the second heat I rode pretty good and won the MX2 class so I was really happy with that. Then we are on the podium with Team Belgium, so couldn’t be better.

Obviously your second Motocross of Nations. How good was the support for you and the Belgian team? Has it been a busy weekend for you?
Yeah, of course, but the Belgian team did a really good job so it’s not a problem. We are really happy and we go again next year.

Finally, just being on a 250 was there much of a disadvantage? Normally in these kind of conditions you can ride a 250 still probably stronger in some cases and pick your way through some of the lines. Or was it just too heavy to try and find and advantage?
No. I think now that was pretty muddy the 250 was coming closer to a 450 because it was more about technique and right line choice. So I think it was better than when it was dry.

Racer X: Jeremy, good weekend for you as well. A fantastic start to the final race. How’s this Monster Energy FIM Motocross of Nations been for you here in Assen?
Jeremy Van Horebeek: It was a good weekend. Yesterday, today was solid. We came here to be on the podium and that happened, so that’s the main thing. If I rode good or bad, it doesn’t matter so much. But it was just a good day. Bummer for the weather, also for the fans. I think it was pretty cold and not easy. But it’s been a good day.

What about the first race? I think Lisa did a preview interview with you for race two. You said you had a problem with the bike and you had to back it off. What was the problem?
Yeah, actually both races. First moto I was fourth till five minutes of the end. The bike was steaming really bad and some light flashing, and then I had some noise. I think not a few more laps before it would blow, so I’m thankful for that. Second moto same. Took the second bike and after ten minutes I was in the lead. The back sprocket got really bad. I don’t know how that happened because it never happened. The chain was always jumping. So I had to not really slow down, but I was not fully focused anymore. So a few guys passed me. But then at five minutes of the end they said, second overall. So okay. Just finish and that was good.