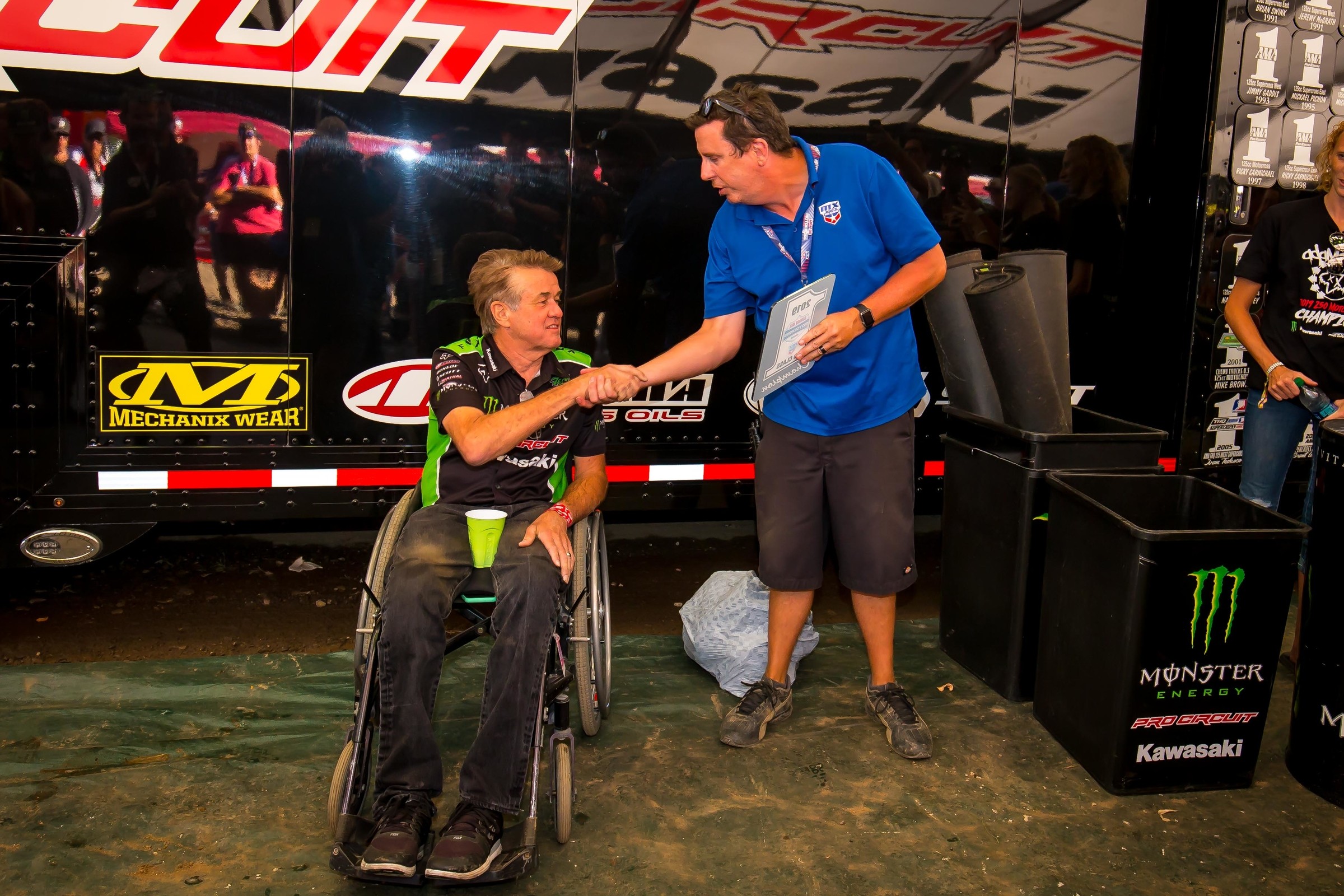 Well, if a DNF was the only thing that could have cost Adam Cianciarulo the 250 National Championship, it wasn't, because his bike simply was not going to blow up in Indiana. After the race, the Monster Energy/Pro Circuit Kawasaki team celebrated by starting Adam's bike and revving it to the limiter on and off for a good hour, to the point where it even ran out of gas. So they poured more gas in and fired it up again! They tried to build a burnout pad with a pit mat, but the spinning rear tire promptly melted it. So they just pulled the bike back under the tent and revved it some more.

The coolest part? The team actually lifted Mitch Payton on the bike and let him do some of the revving (watch Weege's post-race walk and talk recap and around the 15:50 mark you will see Mitch on the bike!). I have no idea is this is common or if maybe Mitch hasn't sat on a motorcycle and revved one of his own creations in years. Regardless, it was cool, because this title meant a lot more than most. Pro Circuit has had its frustrations lately, and thus Cianciarulo's title became a story of vindication not only for him, but his team, too.

"It's been terrible," Mitch said, straight up. There were some years where the team just didn't get the results, but this year stung in another way, with Cianciarulo and Austin Forkner leading 250 supercross on both the East and West regions, only to both blow the championships with crashes.

"I thought both guys had it, I didn't want to talk about it, but I thought they had it," said Payton. "For Adam, to lose it like that, it was sad. Knowing him since he was a kid, I wanted him to have these things. I wanted him to win because I saw how much work he put in it. I remember, as a kid, his dad drove out to California and they stayed in a motorhome in a parking lot! A few years later, they rented my house, my old house when I moved. I knew them so well, but it was just never was happening. It was just injury after injury. It was really hard on Adam, he was coming back from this, coming back from this, and then you get the naysayers that say he'll never do this. I was worried."

"He's like a family member," said Cianciarulo. "Since I was 12 years old I've been around him so much, more than some family members, honestly. To be with him this long, you can't write a better story. Well, I guess you could write a better story, and that would look like four or five championships. But it's been such an up and down career for me, I just appreciate the journey. I feel obviously happy for myself and I'm proud of it, but seeing everyone so happy around here, this whole scene right now, I'm going to look back on this forever. Ten championships couldn't pay Mitch back enough for what he's done for me."

Mitch himself describes the whole journey here in an in-depth post race interview.