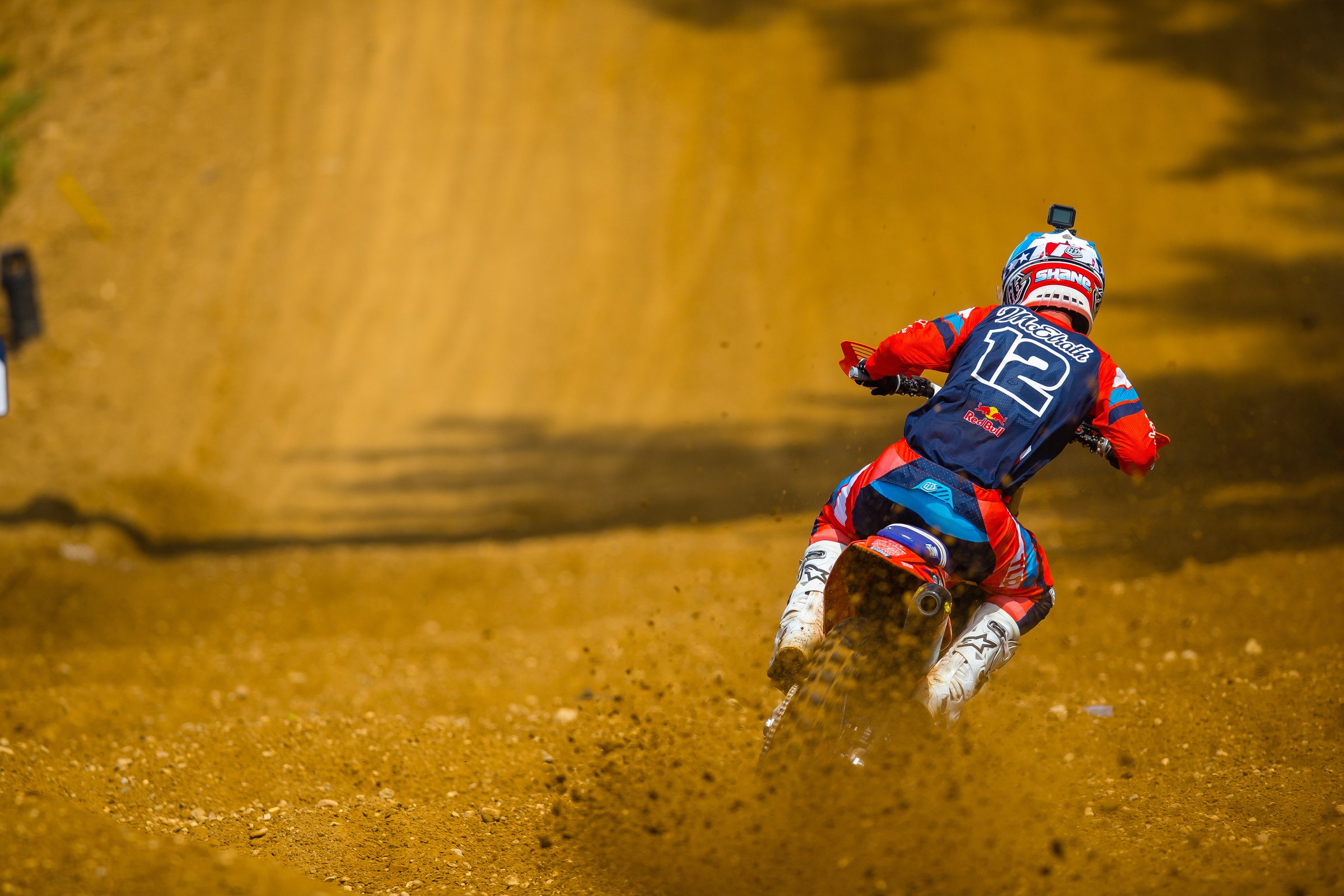 Entering the weekend, Troy Lee Designs/Red Bull KTM’s Shane McElrath had one career moto win and one overall win. On Saturday, the 25-year-old took the second overall win of his career—the first time he finished a national with 1-1 moto finishes. McElrath, who had led two laps through the first ten rounds, led 28 laps (13 in the first moto and 15 in the second moto) on Saturday, moving him past GEICO Honda’s Hunter Lawrence for fourth-most in the 250 Class. Points leader Adam Cianciarulo has led the most laps in the class, 97, then Monster Energy/Yamalube/Star Racing Yamaha’s Dylan Ferrandis has led the second-most with 86, and teammate Justin Cooper has led the third-most with 74.

After gaining two points over Ferrandis (moto finishes of 4-4 for 36 points) on Saturday in Mechanicsville, Maryland, Cianciarulo (moto finishes of 6-2 for 38 points) will carry a 30-point lead over his rival heading into the final round. With 50 points still available at the Ironman National, it’s possible Ferrandis can still win the title, but it’s also possible that Cianciarulo can clinch the title after the first moto.

After four-straight motos of finishing outside of the podium, Cooper finished second in the second moto.

GEICO Honda’s RJ Hampshire, who earned his first 250 Class overall at the 2018 Budds Creek National, finished third in the first moto. In the second moto, a crash on the first lap put Hampshire in 36th but he worked his way to an impressive eighth-place finish, giving him fifth overall.

JGR/Yoshimura Suzuki Factory Racing’s Alex Martin finished third in the second moto, his fifth moto-podium of the championship. After an 18th-place finish in the first moto, Martin finished ninth overall on the day.

Hunter Lawrence returned to racing for the first time since the Spring Creek National, as he suffered a broken collarbone during practice the week of the Washougal National. Hunter’s 10-13 moto finishes resulted in 12th overall. Of the nine nationals he’s raced, he’s only finished outside of the top-ten overall three times in his rookie season of racing in the Lucas Oil AMA Pro Motocross Championship.

Rockstar Energy Husqvarna’s Zach Osborne finished 5-4, bringing his total of moto-finishes inside the top five to 19 (of 20 motos).

Monster Energy Yamaha Factory Racing’s Justin Barcia finished 6-5 to earn his first two motos inside the top-ten since he went 6-6 at the Southwick National. Barcia’s teammate Aaron Plessinger finished 9-9 for eighth overall. Prior to Budds Creek, where he wrapped up his 250 Class Pro Motocross title last year, Plessinger’s best overall finish was an 11th overall at the RedBud National. Plessinger battled with privateer Kyle Cunningham, who finished 11-8 for tenth overall—his best finish of the championship.

By The Numbers, ET3-Peat Edition

Tomac finished 1-1 for the third time in 2019 to earn his fifth overall win of the season. Tomac also became the fourth rider in history to win three-consecutive titles in the premier class of the Lucas Oil AMA Pro Motocross Championship.

If you add the coming weekend's Ironman National, over the last four years, Tomac will have started 115 of the last 116 races in the 29-race AMA schedule of Monster Energy AMA Supercross and Lucas Oil AMA Pro Motocross.

Tomac added 50 points to his championship total, finishing the day with a total of 476 points on the season through 11 rounds. Through 11 rounds of the 2018 championship, Tomac had 493 points, however, his closest competitor, Red Bull KTM’s Marvin Musquin, had 473 points, which forced Tomac to wrap up his title at the Ironman National. While Tomac clinched the title, Musquin and Honda HRC’s Ken Roczen are still battling for second place in the championship. Musquin has 426 points and Roczen has 421 points.

Here’s some stats on Tomac’s three championships in the premier class:

While Tomac wasn’t as dominate this season* as he was last year, his average finish was the lowest it has been in his three championships. Yesterday, Jason Weigandt wrote about Tomac’s consistency in the his 2019 championship versus his hit and miss days in the 2018 championship, which you can read here.

“I mean, today would’ve been a challenging day even at 100% fitness because it was so hot. We had a couple really good practices and then a good first moto. In that moto, I just tried not to go crazy, to conserve energy, because I knew it was going to be a tough one in the second moto. Second in that race was good, and I was also riding pretty well in the second moto, spending half the race in second. Unfortunately, my body just gave up in the second half and I could barely hang on. I lost a lot of positions, finishing seventh. It’s a bummer and definitely not what we wanted coming off of last weekend, but it’s a better finish than my previous races in the heat so we’re moving in the right direction. We’ve got one more race to make it happen.”

“Today had its ups and downs. We were all hoping for another weekend like last, but unfortunately that wasn't the case. Ken started the day great. He qualified fastest again with a good strategy to conserve energy—lay down a fast lap, then relax. He rode great in the first moto and in the beginning of the second moto but struggled toward the end. The heat just got to him and he wasn’t able to maintain his pace. We’ve been pretty much leaving the bike alone, just doing a few small clicker changes here and there to dial it in for each specific track. We’ve got one more opportunity to end the season on the podium, so that's the goal for next weekend.”

“Today was another solid day in the top-five but I struggled with the pace in the beginning. The track was strange for me today, it’s really hard-packed and that’s something I don’t normally excel in so it felt pretty good to go 5-4 and put on a really good charge in the second moto.”

“Today was a step in the right direction. I actually had a sinus infection the past few days which made it more challenging. I was low on energy, which is not ideal for these hot conditions but we pushed through the day."

“Budds Creek was a step in the right direction for us. It was pretty good actually. I got a bad start in the first moto but still got back up there to finish ninth. In the second moto I got a much better start. I was battling right around the top 10 spot, put it on cruise control and was able to keep it in front of him (Kyle Cunningham) to get 9-9. It was the best finish of the summer and I can't wait for Ironman. I expect it to be a good one.”

“The bad start I had in Moto 1 really affected me. Then in the second moto, I was in the wrong place at the wrong time when I had two riders crash in front of me. It was not really the day I expected.”

“Riding was good all day. Bad start first moto but made some good passes. Finally had a start that second moto and lost the front coming into the first turn. Tough deal but can’t be too bummed, it’s the best I feel like I’ve rode all year. One more to go.”

“Yeah it was not a good day,” Sexton said. “I was riding good, qualified first, I feel like I’m really good speed-wise. But when you get blown by on every start, it’s not a good feeling. I got ran into in the first moto, second moto, a guy fell into me and it just ruined the whole start for anyone behind him. It was a struggle today, rode good but can’t come from last. One thing I’m happy about is that it was hot today and I didn’t have any problems, I felt good. Next week, Indiana, I love that track, so hopefully I can end this on a high note.”

“It was a tough day. I was pretty frustrated on my part to crash but I’m happy to be healthy because I had a lot of sketchy moments with other guys coming through the field. I’m looking forward to the final round and I want to hit every lap strong and finish the season in a positive way.”

“Gnarly day at Budds. I was already facing a tough day coming from two weeks of no riding and limited off-bike training so the two first turn pile ups I was involved in really weren’t the cherry on top that I was looking for. We did our best and learned a lot for next year about the track. I’m safe and healthy which is good and just building each time I am on the track! Looking forward to Ironman. Also, I have to give it up to the team for dealing with the heat and humidity! That was gnarly!”

“We made a lot of progress this weekend! I crashed in the first moto so that was a bummer, but leading a couple laps in the second moto felt really good! We have one more round to make it (a podium) happen and I’m looking forward to it!"

"Man today was a lot fun. Although the end result didn’t fully show what we were capable of, there was still a lot of positives to take away from it. The first moto we ran a good pace with the leaders for the majority of the race, finishing in ninth. In the second moto I had such a good jump out the gate, but then the rider in front of me tucked the front end and I had no where else to go, so we went down. The bike was completely mangled from the wreck, which is a bummer because I think we could have really fought for a solid finish. But hey, that is racing and we will be ready to go next weekend.”

“This weekend I just wanted to come out and have some fun on the bike. I thought I was recovering pretty well and I rode a little bit this week and was feeling somewhat normal but after coming out here in this heat, I realized that I wasn’t feeling very good. I guess I’m not fully over the illness.”

"Today was a bummer for me. I struggled to find my groove in the morning in qualifying and then in the first moto I tweaked my ankle pretty good that ended my day early. I am going to get everything checked out this week and make a game plan with the team from there. The goal is of course to race the last race and finish out the season on a high note."

I hate gettin beat by him he hates getting beat by me but we love eachother ? had to salute @zacho_16 on the way by. Hahahaha good times zacho